My Beardie who is about six years old, was prescribed Baycox 2.5% SOL, Drontal Puppy suspension, and Sulfatrim Oral Drops. He had the first dose of Drontal, yesterday. He has a second dose ten days later.

Today I gave him Baycox 0.4ml and it say's it's for three days. I've heard it is quite strong. The Sulfatrim is 0.2ml once a day. Vet said it was ok to give them on the same day, but I'm not so sure.
Has anyone else had to give more than one medication? Is it safe?
Is it OK to give Baycox, three days in a row?

Also before he was prescribed these drugs, he's been taking Baytril. Vet said it's OK to carry on with it. Is it? I don't want to do him harm.

Also I've been having to syringe feed him, for a couple of weeks.
A

Hi there, that sounds pretty excessive to me. What exactly is the diagnosis, what were the antibiotics for, how was your beardie acting before the meds. and now since he's been on them ? Baycox [ toltrazuril ] is an anti coccidial, is that what your beardie has ? Ponazuril is reportedly the mildest med. for coccidia.
L

Original Poster
Hi, Thank you for the reply.
After I gave him a fecal sample, he said there was coccidia and sounded like he said nematodes, which I guess is what the Drontal is for. Sulfatrim also seems to be for coccidia.
Earlier in the year, I took him to the vet, as I was concerned about a fleshy growth, inside his mouth. He did a biopsy, which nothing was found. Since then, it grew back and another appeared in his mouth, opposite side. If he accidently bites it, then of course it bleeds.
More recently, he stopped eating, even refused his favourite treat. I was also concerned about how his breathing was sometimes. Which is why I think the vet put him on Baytril.
About a week later, the vet phoned me, asked me if he's still not eating. He then prescribed Emeraid Omnivore, to syringe feed him. Soon after the diarrhea and vomiting started. I wondered if it was the Emeraid. So I switched to giving him pureed vegetables. Since then the diarrhea and vomiting stopped.
He seemed to think giving all the different medications in the same day would be OK, but it doesn't feel right to me. So I gave the Drontal first, then the next day the first dose of Baycox. I'll probably give the second dose today. I won't give the Sulfatrim, until I've done the three days of Baycox. At first I did wonder if I should space them out more?
Also, how long have others had to give Baytril for? He gave me what sounded like six weeks worth. I'll hold off giving him that, for the time being, he already had over a weeks worth. The vet said he will phone me again, later this week.
A

Aw, that's tough that he has some type of growth in his mouth. Of all places, being in that area gets in the way of eating + giving the meds. Do you possibly have a pic of the inside of his mouth ? I know it's not an easy place to get pics. Good that you figured out that veggie smoothies were more palatable for him. I wonder if you could mix some Repashy grub pie with it. If not, that's fine, he's getting plenty of nutrients from the veg. smoothies. I don't know what to tell you about the antibiotics, they can be helpful or harmful but you might not know until you've given the prescribed amount. BTW, what is your beardie's name and can you post a good pic to show his body condition ?
L

Original Poster
I call him James. But he had a different name for about 8 months, before I got him. People seem to find it funny, that I chose that name.
When the vet prescribed the Baytril, he must of thought it to be a respiratory infection. But when he saw him last, he did say it’s possible that he has a growth in his throat. I’m starting to think it’s that too. 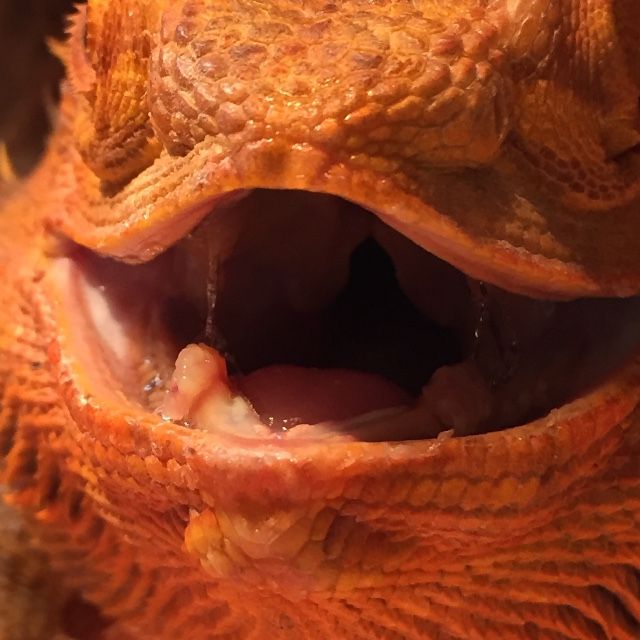 I see the fleshy growths in the gum area but I don't see any sign of a growth in his throat at all from that picture.
L

Original Poster
I think he meant further down his throat, as he said he would have to put out him out and put a camera down there. Today he was sick, just as I was getting ready to give him the medication. I'll try again to tomorrow.
A

Oh I'm sorry that he was sick, poor guy, how is he today ? And I can't see in the back of his throat there. I hope the vet can help him, I know this must be very hard on you.
Share:
Facebook Twitter Pinterest Email Share Link

T
Toerag mk2
I see my lizard is being given Allopurinol 100ml tablet 10mg/ml (0.4) and tramadol 0.2ml every other day to help with gout. I have tramadol at home can I water it down and give it to her and if so do anyone know how much to water down ?
Yesterday at 12:15 PM •••