Menu
Log in
Register
Install the app
You are using an out of date browser. It may not display this or other websites correctly.
You should upgrade or use an alternative browser.
Resource icon

Leave a rating
Written by Alex Sleeis and Denise Bushnell on July 7, 2006

Impaction is a condition where a bearded dragon's digestive tract is blocked by a solid or semi-solid mass.

This condition may be caused by several things. One possible cause is if a bearded dragon is permitted to eat food items that are too large to properly move through their digestive tract. The best prevention for this is to remember that a good rule of thumb for determining the right size for food items, is that any item fed should be smaller in size than the space between your bearded dragon's eyes.

Also, some food items may not be easily digestible, particularly, feeder insects with hard chitin shells, such as large crickets, mealworms, or superworms. Feeding insects such as these to your bearded dragon (especially those who are not yet adults) puts them at an increased risk of developing an impaction.

Another major contributor to impaction is the ingestion of substrate. Many particulate substrates can pose a risk. In many cases, Calci-Sand has been reported to have caused impaction. However, it is not alone; any type of pellets (such as Rabbit Pellets), pebble-like substrates, and several dried plant-based substrates are also known to present a high risk. Play sand can also cause impaction if it is ingested on a regular basis, or if a great deal of it is ingested at one time.

The packaging of many substrates claim that they are completely digestible. However, please be very wary of claims from the manufacturers of these products. Unlike products for human consumption or use, the safety of products used for our pets is under no such regulation.

Before trusting a substrate, do some research to discover what those with lots of personal experience think about it. Many calcium-based substrates (including, but not limited to Calci-Sand) not only claim that their substrate is digestible, but also claim that it is beneficial for your bearded dragon's health if they do ingest it, because it is a source of calcium for them. However, a bearded dragon may be inclined to eat more of this substrate than is good for them, if they feel a need for additional calcium in their diet. And they are NOT digestible, as they claim. Combine the difficulty of digestion with the increased likelihood of ingestion, and you may have yourself a very sick bearded dragon.


How will I know my bearded dragon is impacted?​

There are a few signs that you may notice. One of the first indications is that your beardie will stop going to the bathroom regularly. Typically, your beardie will have a bowel movement (i.e. poop) once a day. Now this is not a hard and fast rule, since every bearded dragon is different, but if your bearded dragon has not moved his bowels in a couple days, and is not acting like his normal self, be sure to pay attention. This may be an indication that something is serious going on.

An indicator of a more serious issue could be partial paralysis. Typically, a beardie's hind legs will seem to have less mobility, and often drag as your beardie moves. If you see this happening, it could be that he has an impaction. Of course it may be something other than impaction as well, but it's definitely a problem that needs your immediate attention.

Another sign, often accompanied with the paralysis mentioned above, is a bump or lump along the back, near the spine. Like the paralysis, this is usually an indication of a more serious problem and should be cared for immediately.

Well, I am not a medical expert on this topic, so I am hesitant to offer any extreme guidance on how to properly deal with impaction. What I would suggest is that with the earlier stages of a mild impaction, you may be able to offer your bearded dragon some relief by giving him a warm bath and gently massaging his abdomen. Massaging gently down towards the vent may assist your bearded dragon in moving an impaction down through his digestive tract, so that he can pass it. Another thing that may help is to dose your bearded dragon with a few drops of vegetable oil, prior to bathing him, to help move things along more easily.

I would also strongly recommend that you get your pet an appointment, as soon as possible, with a knowledgeable vet who is experienced in the treatment of bearded dragons. If you cannot locate an experienced reptile vet in your area, you may be able to get some assistance by logging onto HerpVetConnection.com, which is a site that lists veterinarians experienced in treating reptiles, by state.

Another good source of information is an article entitled "Impaction in Bearded Dragons" which is available at ReptileRooms.com, written by Cheri Smith. She goes into much more detail about what you can do yourself to help treat the issue.


So what happens when your bearded dragon is impacted?​ 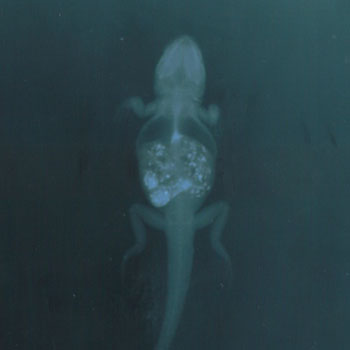 Impaction has been explained many times. I frequently see it discussed in numerous forums on this site. In fact, we recently (at the time of this writing) had one discussion in particular, in which the poster provided the X-ray image of their pet's impaction. It was a severe case. The bearded dragon was kept on play sand covered with a layer of Calci-sand. The beardie managed to eat the sand (a lot of it). This X-ray image was probably the most astounding illustration that I've ever seen to make people truly aware that this is a very real and dangerous issue, and not just an exaggeration.

Yes, all those bright areas in the belly are sand! As one of our forum members commented, this beardie was more like a "Rock with a tail" than a normal, healthy beardie. In this particular case, this picture really is worth a thousand words, and illustrates the seriousness of the problem much more effectively than words ever could. 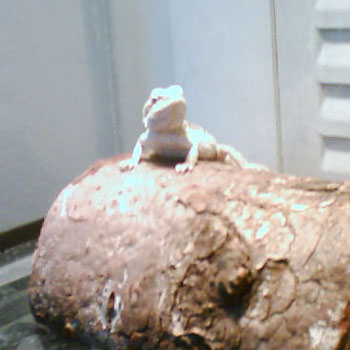 And just to illustrate that, in some cases, with proper medical care, impaction does not have to be a death sentence, the following photo is the same bearded dragon, feeling much better now, and well on his way to a complete recovery.

The owner of this bearded dragon said of the medical treatment, "They gave him an enema, some laxitives, and a shot of calcium, and he passed it that next morning, and he is doing awesome now."

It is nice to hear that this particular episode had a happy ending! Special thanks go to "Hoth" for authorizing us to use these images of their little beardie, "Draco".