My little boy Clyde is just now 10 months old, and recently I have noticed signs of brumation. He is still eating his morning roaches ferociously, but he has started to attempt to nap during the middle of the day a lot more. He will go into his hide and try to burry his head under the blankets to sleep.

I'm worried he might be too young to brumate? Other than the napping he is very happy and healthy, almost never shows stress marks, etc. I have all of the correct lighting and a 40 gallon (I'm going to upgrade soon cause he's getting bigger). My basking light is only 75 Watts because it was recently really hot and hard to keep the temps down but it's gotten a little colder and I was thinking of switching back to my 100 Watt bulb. Right now there is a stick he can climb up to get closer to the light where it will be 100 degrees. The colder side of the tank has been around 75/80 I think. Last winter I kept it closer to 82 on the cool side.

Should I up his tank temps? Or should I turn the lights off early and let him sleep more? Right now i have the lights on for 12.5 hours a day (they were on 13 hours a day but he was seeming tired so I gave him another 30 min of sleep).

Clyde is also female but I've felt his belly for eggs and I haven't felt anything, I know it would be a little early for that too.

My dragon "Charlie" went into brumation at 9 months old and it kinda scared me to but, he turns 3 next month and is doing fine.
N

Mine slowed down at about 5 months and brumated at 8, but he was really big for his age (18 inches, 400g). He REALLY cut down on his eating before brumating, though, down to like a bug or two a day. So yes, it's possible, but it's also necessary to rule out any other potential health issues first.

Original Poster
I'm still not sure what to do, he has a big appetite still so I think it's the early stages. Would it be a bad idea to raise temps and add more daytime to see if he stops napping? Or should I start giving less lights to let the process begin?
K

Original Poster
I have the right UVB bulb (https://www.amazon.com/Zoo-Med-26062-Reptisun-Fluorescent/dp/B00AQU8HKO) in a reflective fixture and a basking spot of about 100 degrees.

I really don't think it is lighting, the bulb is not yet expired and emits good UVB, no signs of MBD. He has a great appetite still, he just wants to sleep more.

It got a little cooler so I just switched from a 75 Watt to an 100 Watt (what I used last winter). I had a 75 because it was hot here and hard to keep temps down. I think he maybe noticed the change in temp but should be warmer again with 100 Watt. His cool side was never below 70, usually high 70s during the day. Now it will be closer to 80/82 on the cool side and at least 100 for basking.

Where is the UVB inside the tank or on top of screen? The placement is crucial for getting the UVB --how old is the UVB if its less than a year your good - T 5's need to be changed out at approx a year I recommend a month prior to - we need to make sure all the temps and lighting are good before we say its brumation - How big is the dragon? Is he over 300 grams? Can you take a pic of your tank and lighting please so we can see what might be going on that we are missing-- it could be nothing and hes slowing down for the winter but it is not common for dragons to go into brumation under a year old -- especially babies they should not brumate at all ----

Original Poster
Yes the bulb is less than a year old.

I'd advise you to weigh Clyde once or twice a week to be sure he's not losing a lot of weight. Dax dropped from 420 to 380 (so 10%) over a month and a half. Knowing he wasn't dropping it quickly was a small weekly relief as I acclimated to his behavior.

Dragons, under a year often slow down & go into a brumation. Not all of them do & most of
them don't brumate until they are over a year in age.
If his weight is stable & he appears to be in good health you can let him slow down for awhile.
Let us know what his weight is.

Original Poster
Okay, so I messed up and the night before last I wasn't home and his lights got left on all night by accident. I had set them to "ON" instead of timer because I had to wake him up 30 minutes early to feed him on Wednesday morning and forgot to turn it back to simmer mode. So Wednesday night his lights didn't;t go off and I imagine he got really poor sleep and that it threw his circadian rhythm off. I felt really bad when I noticed but he seemed okay. Then this morning (after a full night's sleep) when I came to check on him he had black beard he never does black beard and he is female so it's not a dominance/mating thing. He is either: stressed from the day/night confusion, wanting to brumate, or maybe it got cold last night? My room has a metal heater and doesn't go below 60 at night, but I just added his ceramic heater because its gotten colder again this week (I live in Colorado).

The black beard stressed me out but he might just be confused because I threw his schedule off. He also just woke up so maybe he's grumpy? lol. His appetite is still great, even now he just woke up and isn't fully warm yet but wanted his bugs <3 I'm going to see how he feels after getting back on the right sleep schedule. But when will I know that it's the right time to move into brumation care? This whole time that he's been wanting more naps his appetite hasn't gone down. Do I have to wait until he shows clearer signs of brumation?

I will weigh him later today. Last time I weighed him he was 155 grams and that was 5 months ago (when he was 5 1/2 months old), and he's gotten a lot bigger since then.

Since I started writing his black beard has already subsided a lot, and it was more of a dark grey when I first saw it. He is fed and basking now
K 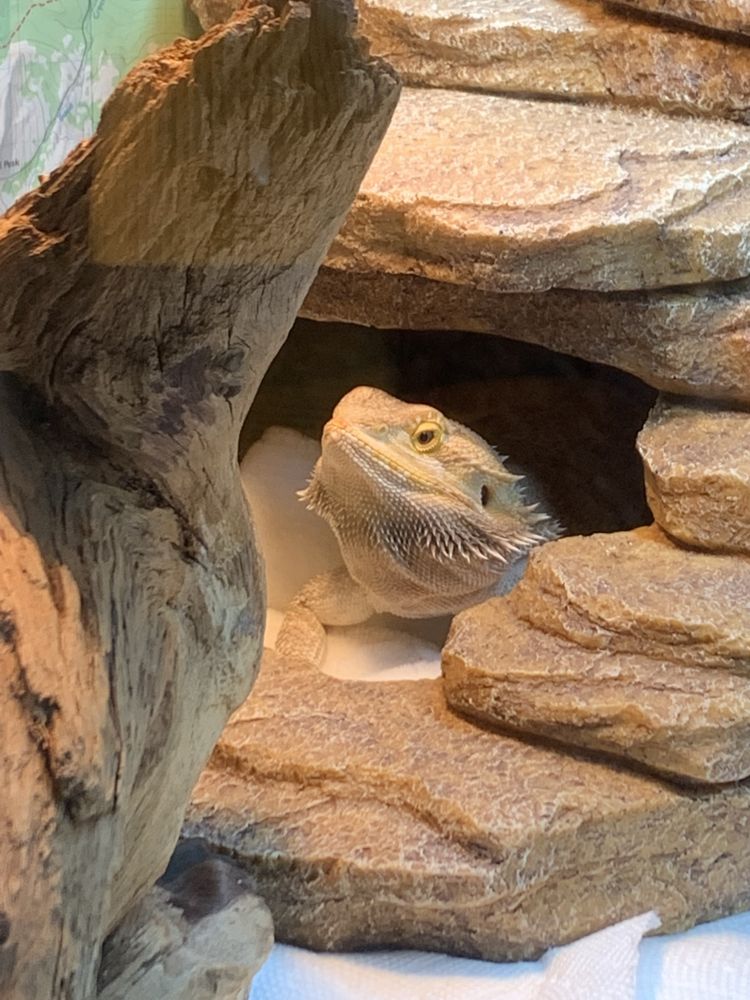 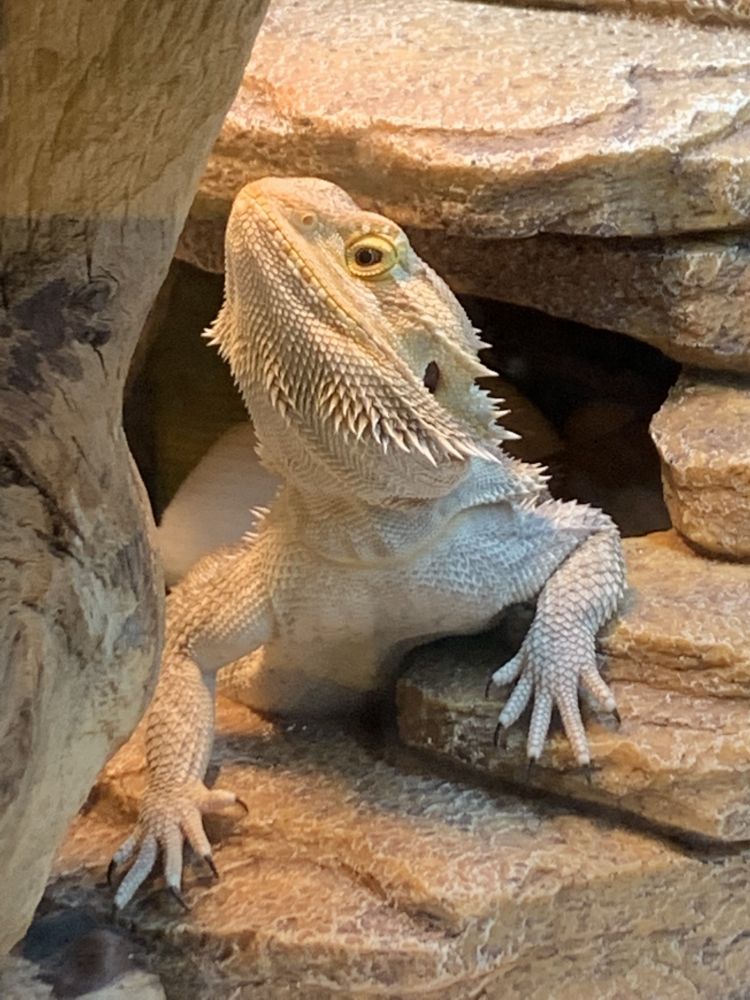 Okay, he is about 10.5 months old but he's only just started napping during the day, no other brumation behavior. I'll keep an eye out. If he seems tired should I lengthen his nigh cycle? I usually keep it at bout 11 hrs of nighttime and 13 hours of daytime.

I
Dragon not eating and sleeping earlier

D
Not eating but basking all day