I rescued a beardie yesterday, and am looking for a little support group overall for the most part, and any advice you have to give... and hopefully to watch this little one progress from pitaful to fat and sassy over the next months!!! For some quick background info...I'm a long time lurker of several bearded dragon forums over the past 7 years, and I've had 2 beardies over the past 6.5 years, but have always been a 1 beardie household (until today). My first I had for 5 years, before he passed from a long term illness, and then I've had a new baby for just over a year.
This one ended up with me yesterday. I'm not entirely sure of all the details, but he ended up with a wildlife rehabber about 3 weeks ago, who has to go through major surgery and who has been trying to get a better home for him since then. He was supposedly bitten by another bearded dragon on the tail base before going to the rehabber, but in my opinion it looks more like a dog bite. He's skinny, and the saddest part is apparently he put on "good weight" over the past 3 weeks - his little hip bones are all sticking out Here is a first picture, but I"m not sure how well the skinniness will come through 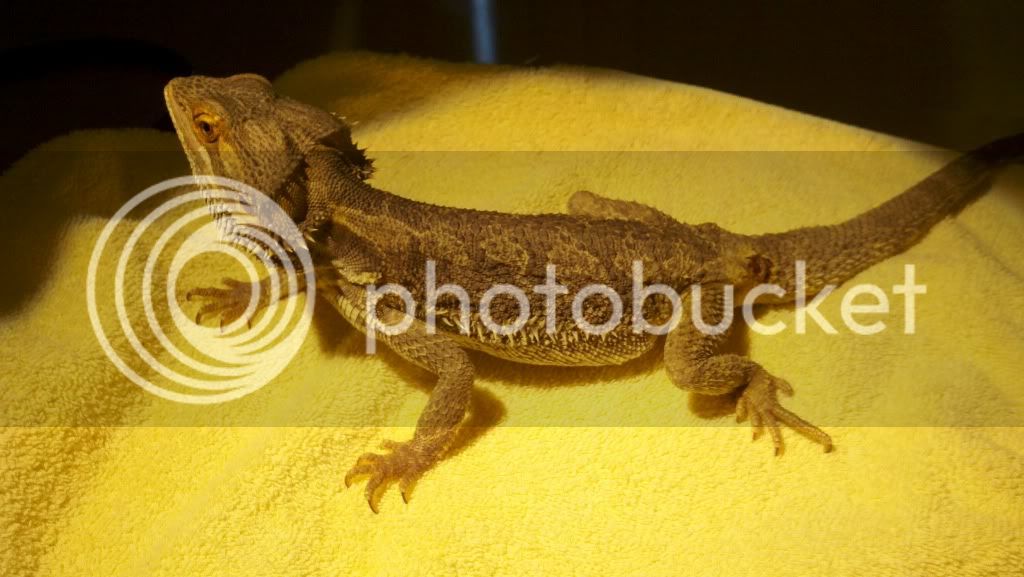 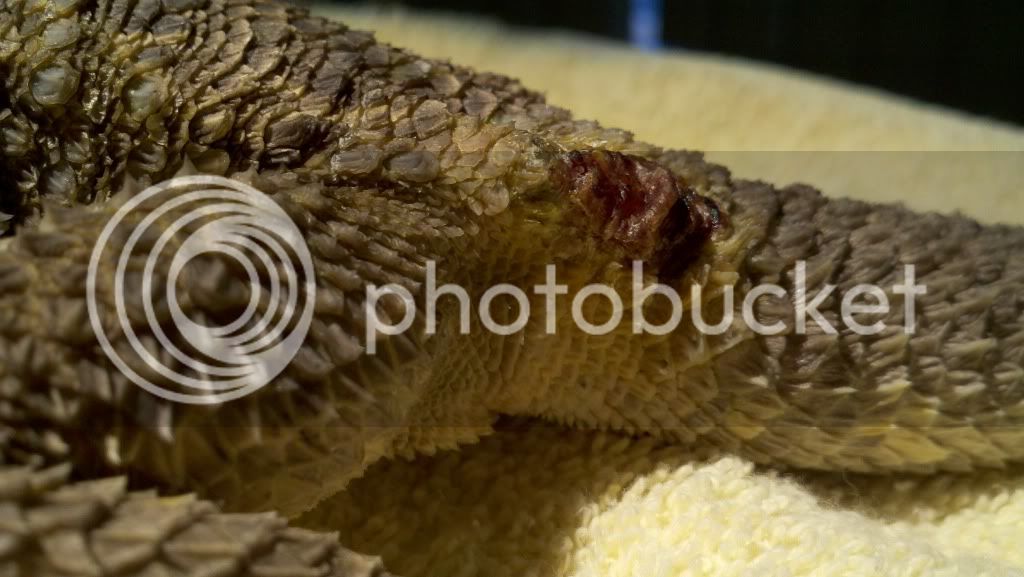 At the vet's office we did a full workup - got that scab off and the skin and area cleaned up, bloodwork, xrays, took a biopsy of the wound to make sure the yellow coloration around it isn't yellow fungus , and got him started on antibiotics and pain meds. He never would poo at the office, so no sample to test there (stinker). Here is a pic afterwards, in the 2nd bath of the day 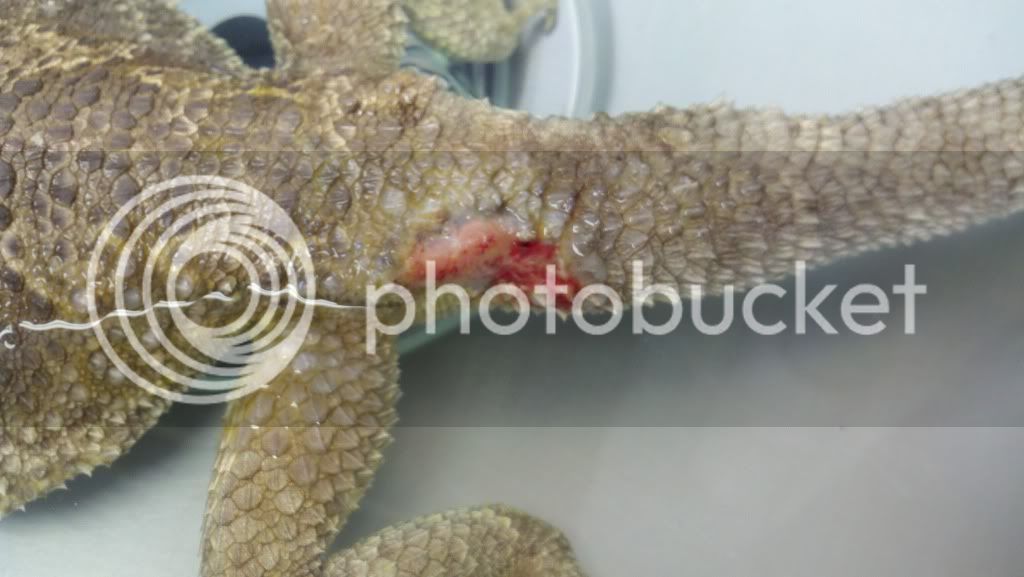 Things look better at that point, and he's lightened up a little bit at least.
I've got lights, etc on order for him, but for now, my tortoise was nice enough to share her UVB light , and we'll shift some lights around to get things up to temp, and then hopefully my next week all my stuff will be in and he'll be set up.
As I mentioned earlier support and advice are welcomed! Luckily my significant other, Matt, loves the beardies too, but doesn't quite understand I know many of you guys will !!! I've already become alarmingly attached to this dude, and have named him Stitch. This is the fastest I've named something in a long time, so hopefully that's not a jinx, but will give him something to aspire too. Figured the name worked...he's a rescue, but still a bit fiesty, and maybe he'll aspire to some mischievousness over time
When I got him home tonight and put him in the 3rd bath of the day (where i finally got poo

) he lightened up the most I'd seen him, so I'm hoping he knows that he's HOME... and that's my anthropomorphizing for the day... (But check out the pics?? What do yall think ?????) 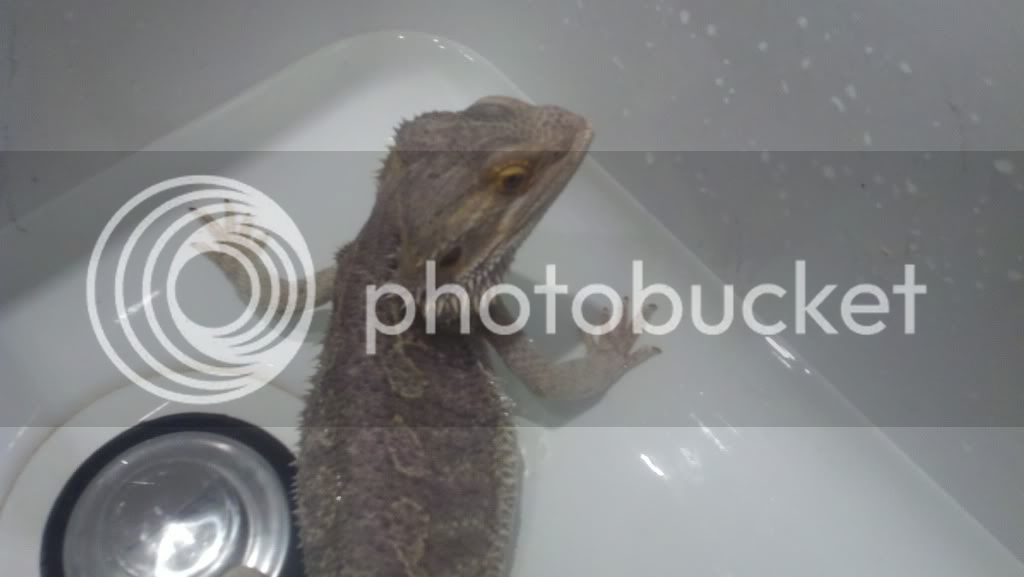 and then snuggling in a towel - he's not sure quite what to make of this I think, but is still snuggled in the towel propped on my leg as I type.... 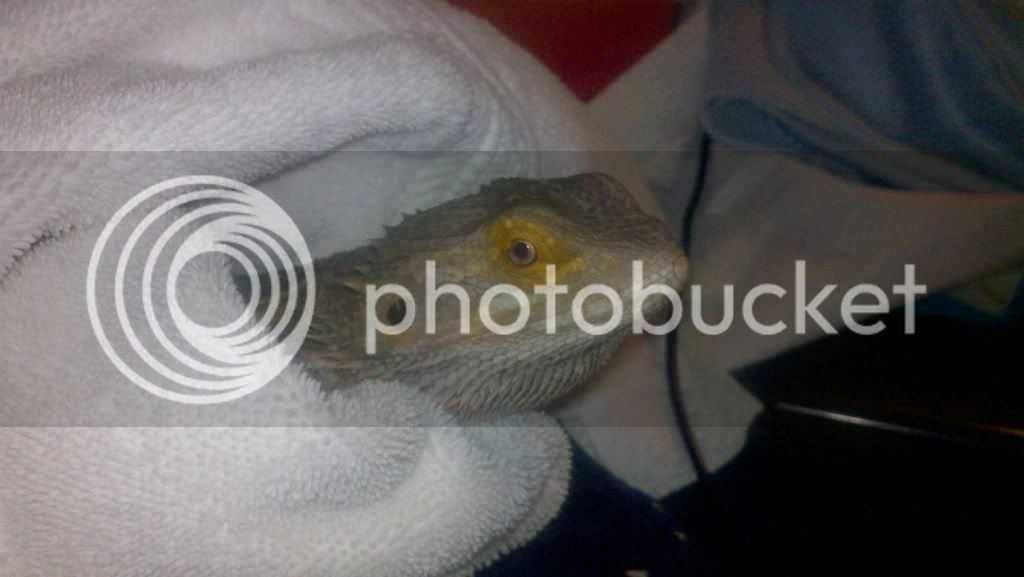 I'll have questions and concerns soon I'm sure, but I wanted to introduce Stitch !!
Carrie
Click to expand...

Original Poster
Thanks !! I did use photobucket this afternoon late and it was working then.... no telling if it's working now though :wink:
Hope it lets you post some new pics too I'm glad your crew is doing good, and hope Scarlett goes ahead and lays for you so you don't have to worry too much about her. I'm figuring Sydney will lay again here, but no signs of it yet.... other than her grumpy beard and sexy push ups that is.

Retired Moderator
Those pics are a riot, it's so nice to have a guard cat! Keeping them informed of your presence...so funny. The pics are all great I get such a kick out of your dragons. Stitch especially, love the bobbing of everything around. Lonzo does that alot. Rubio & Lonzo just woke up last week, they're still kind of sleepy & not eating anything much. Time for baths tomorrow. Can't wait for the weekend, then I get to spend time with each of them.
Give them hugs from my gang,
Deb

Pancake151
you know that feeling when you want to change your profile picture, but like you don’t want to lose the good one you have? That’s me, right now
Thursday at 3:31 PM •••
S
samanthamae1432
HELP WITH MY BEARDIE EGGS DONT WANT THEM TO DIE
Monday at 11:09 AM •••