https://www.beardeddragon.org/useruploads/ click on XIMG at the top of the message box then click on the pic it should post
135 is wayyyyyy to hot--- move the basking bulb up --- the probe is going to give you an actual temp please post pics so I can see
Karrie
C 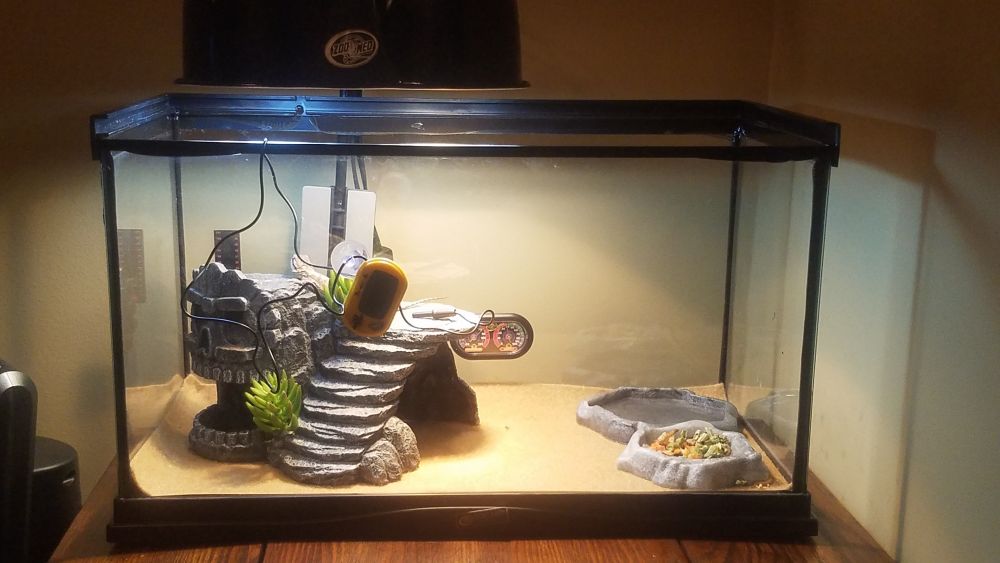 yes I know it's hot but is the surface if I lift the prob up it reads the air temp of 100 its already 10inches away if I raise the light the heat in the tank will drop it's at 85 now I'm thinking the decor material is heated up cause of what it is made of ? very confusing
K

You dont want air temp you want that spot where he is sitting -- if its 135 its too hot -- its the decor piece thats heating up so hot --- please get a different piece or keep raising the lamp -- you can get something like this from Petsmart that works really good for giving different heat gradients
https://www.petsmart.com/reptile/habitats-and-decor/habitat-decor/thrive-driftwood-reptile-decor-54734.html?cgid=500116
Please get a long tube UVB I am assuming one of those bulbs in the fixture is a coil--- please order this your going to need to upgrade your tank soon -- I am thinking that tank is a 30 gallon ?
https://www.pangeareptile.com/store/zoo-med-reptisun-t5-ho-terrarium-hood.html 24" fixture it comes w/ a 5.0 bulb - it can be used on the tank now but it would need to be unobstructed and 6-8 inches from basking decor after upgrading to a 40+ gallon tank you would need this bulb
https://www.pangeareptile.com/store/zoo-med-reptisun-10.0-uvb-t5.html
this fixture and bulbs sell out quickly please get this ordered ASAP - this place is really good and fast they ship Fed Ex
Karrie
C

ok perfect thank you for the help I do have 125 gallon tank built into my wall but I'm assuming I'll have to do a 40gal upgrade before the big tank ?
K

Hi guys! I’m super new to owning a bearded dragon, and I just recently gotten my beardie on Tuesday and I’ve been having a lot of difficulties with the heating. I might just be overthinking it, I just want to make sure I have the best environment for the little guy! I know they’re about 4months old, and their name (and gender) are TBD.

I had gotten a tank starter set from a place called Reptopia in Albany, OR. And it came with a 40gl (I believe) tank, a Flunkers Sun Dome that’s meant to increase UVB. The bulb they gave me was a Vivosun that’s supposed be both a heat lamp and a UVB. It’s at 125W/120V. I keep this on for the day, and on his basking side, but it hasn’t gotten up past 90 degrees. And the night I had gotten them it was the only one I had and so I had to put them in their carrier thing and put a t-shirt around the outside so they were warm but the light wouldn’t keep them up. It wasn’t great, I know but it was all I could do at the moment. The next day my partner got a Zoo-Med (up to 100W) mini deep dome Lamp fixture that also is UVB (and now that I’m reading the box it says that it’s 24 hours so that might just be what I need to do but I want to make sure) it’s a red light and I’ve noticed it doesn’t bother them while they sleep, but at night it’s currently only at 83.1F. I read a lot of online stuff and it says it’s fine as long as it doesn’t go past like 70F at night time. My partner also got a heat rock for the basking side. So they also have that. I’m just kinda stressed and constantly checking the temp and struggling to keep it where it needs to. The setup also came with a digital thermometer, but I swear it’s constantly changing and never stays at one spot. It’ll read like 75.3F for a solid 5 minutes then start slowly going down.

I have a little log and a tree in his basking side, I recently moved the light over the tree just so that way they could climb up and get more heat if bedded. But I haven’t seen them use the heat pad like at all, so maybe that’s a sign? I’m not sure.

If there’s anything more I could do, or if anyone else had this problem but there was an easy fix please let me know. I’d greatly appreciate it. I just want my beardie to be happy and warm.

Thank you so much!

I currently have the tank on my floor because I don’t have a table for it yet, so I won’t be able to use tank heaters until I can find a big enough table to elevate the tank.
K

Please get it off the floor as soon as you can--- you do not need tank heaters -- the only two lights you need that are a must is a bright white basking bulb that keeps temps 105-110 for a baby 95-110 for a juvie/ adult -- taken w/ a digital probe thermometer a MUST! And a long tube fixture for a UVB NO coils! They are inadequate and a health risk- the long tube fixture like a Zoo Med Sunblaster or a Arcadia -- w/ a Reptisun 10.0 T 5 or a Arcadia 12% Desert bulb- NO colored bulbs they are harmful to the eyes of the dragon-- if you need extra heat in the tank w/ your tank falling below 65 at nite please get a CHE ceramic heat emitter - the dome needs a ceramic socket- NO HEAT MATS NO COLORED BULBS AND NO COILS FOR UVB PLEASE- when you get the UVB please post back on here so we can help you set it up - distance and placement in the tank is crucial -- if you have any more questions please ask

Hi! I am curious about the screen filtering out UVB. Is this a big issue? I've had my UVB above the screen this whole time. I was worried about the brand but I just realized ReptiSun and ZooMed are the same thing, few!

Should I mount it on the inside? What do I do with the hood? Shouldn't it be facing down and not out?
K

KarrieRee":1zu1kebx said:
please tell me what your using and screen
Click to expand...

The screen I'm using is from this: https://www.petsmart.com/reptile/starter-kits/zoo-med-reptihabitat-bearded-dragon-40-gallon-terrarium-kit-15027.html?cgid=500117
^don't worry I'm not using the sand or coil UVB that comes with this kit

And I have the ReptiSun T5 HO, goes across the entire length of the tank.
K

Ok can you post a pic of it for me please -- the UVB is across the whole tank can the dragon escape the rays w/ out hiding if he wants to? 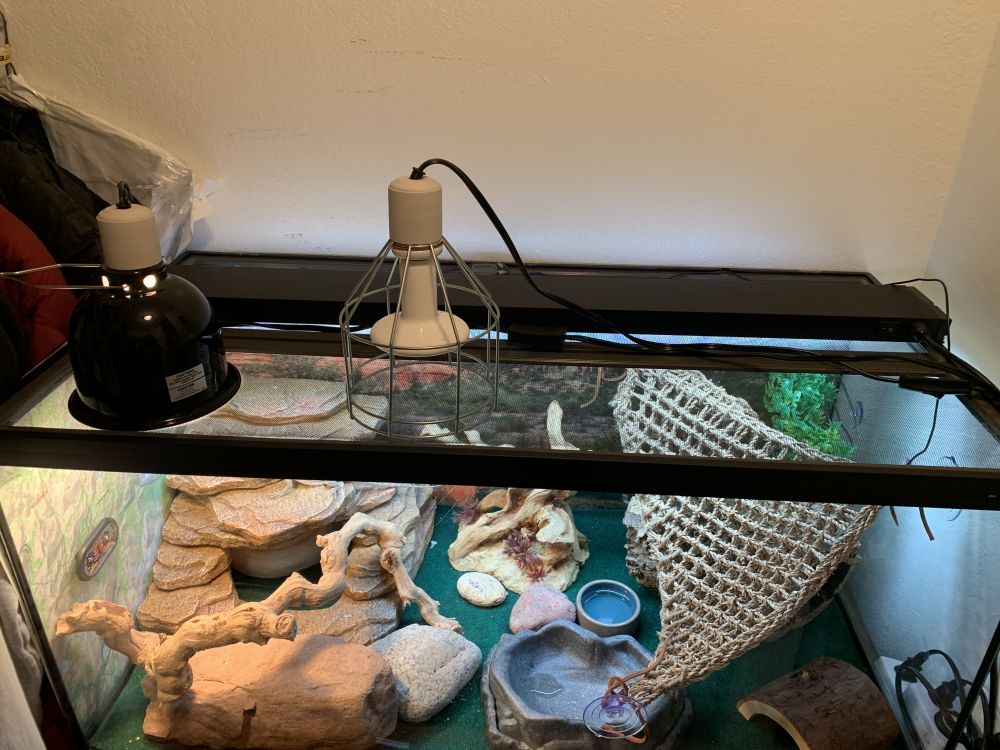 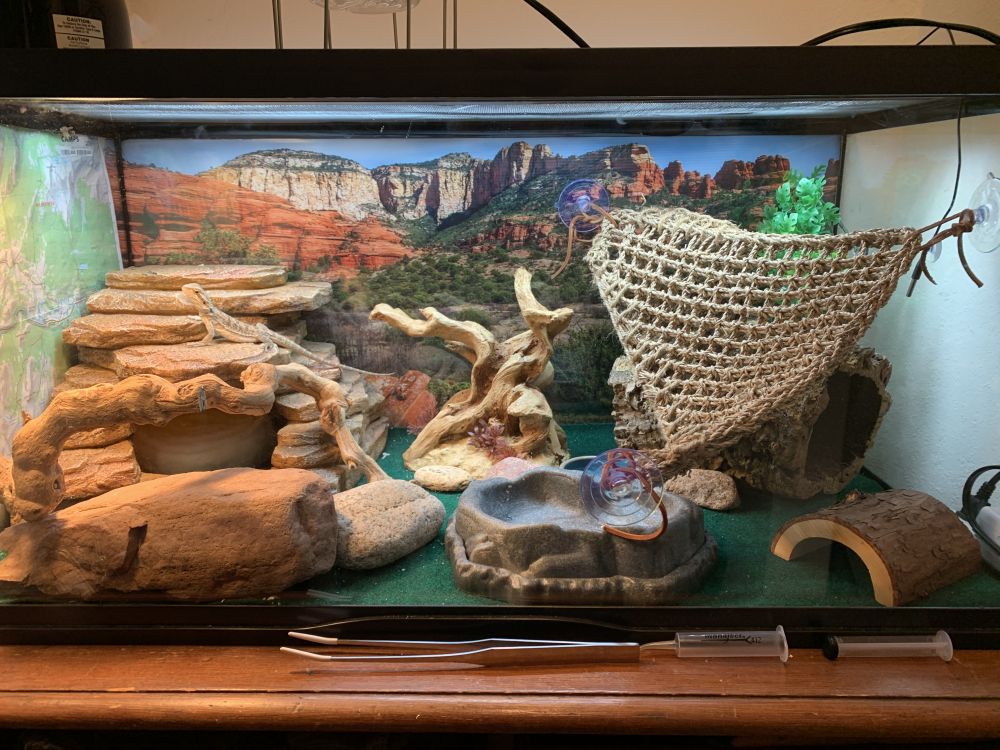 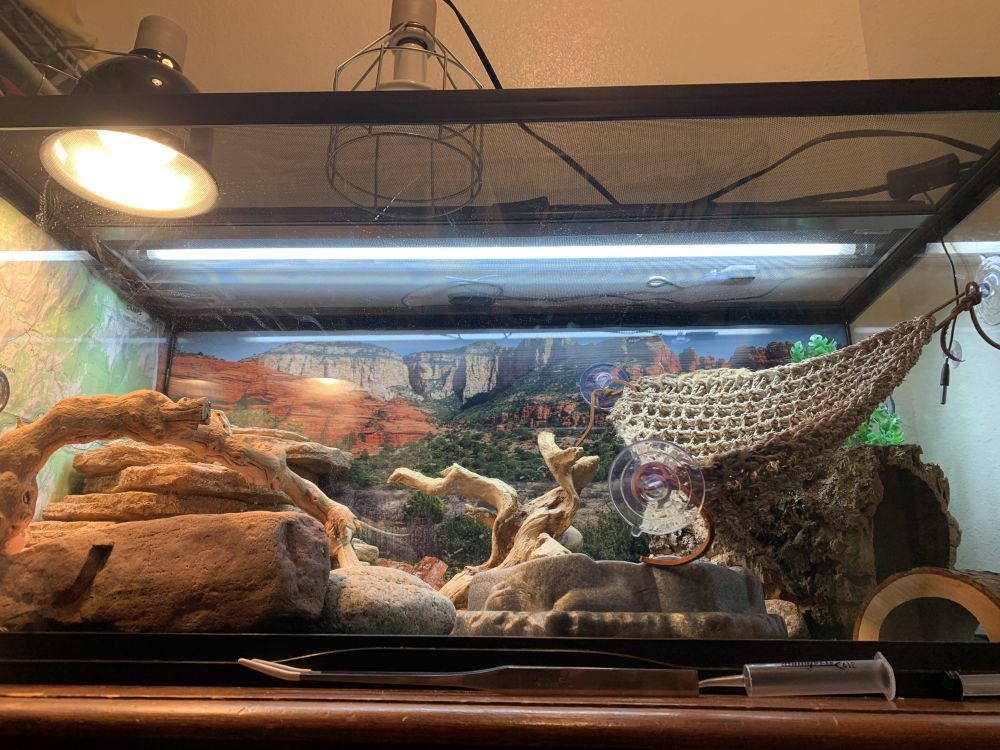 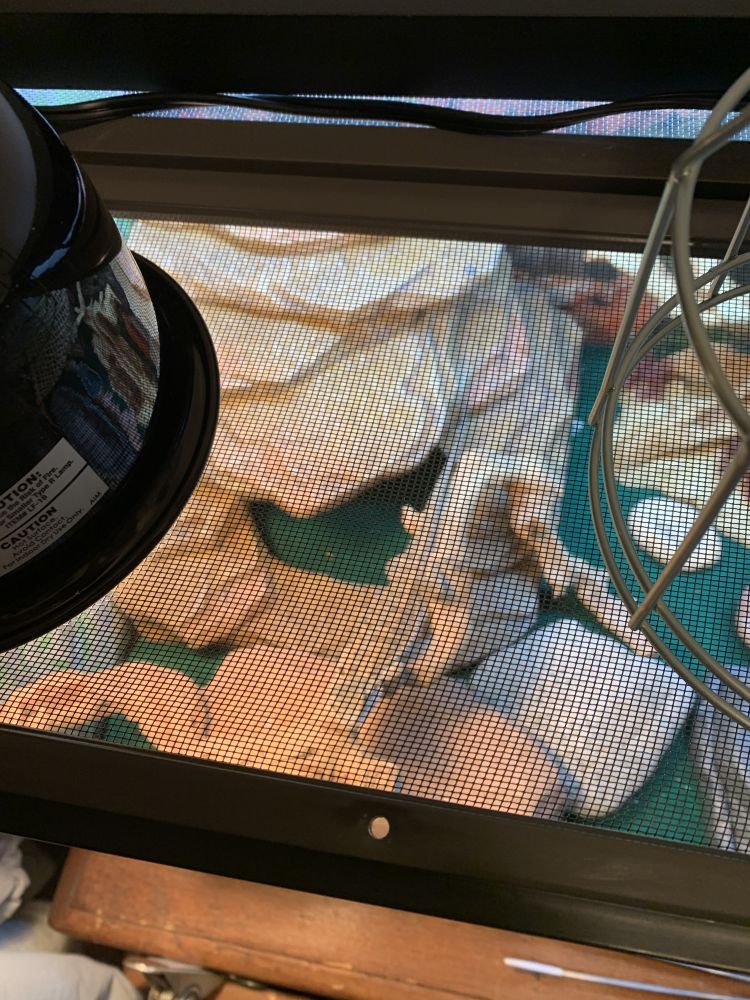 That decor piece he's sitting on is out of the UVB rays? If so that is good-- watch his behavior basking eating pooping active-- the big dish is a food or water bowl? The tank looks a little crowded- you might want free up some floor space - does he use the log hide? Ok so that is a wide hole screen distance should be 8-10 inches above decor piece

KarrieRee":2jdk9yk3 said:
That decor piece he's sitting on is out of the UVB rays? If so that is good-- watch his behavior basking eating pooping active-- the big dish is a food or water bowl? The tank looks a little crowded- you might want free up some floor space - does he use the log hide? Ok so that is a wide hole screen distance should be 8-10 inches above decor piece
Click to expand...

That decor piece he's sitting on is out of the UVB rays?
^ I'm not sure what you're trying to ask? Is it "out" of the rays?? The UVB goes across the whole top near the middle/back of the tank.

He's pretty active little guy, and a vivacious eater. I am having a little issue with runny stools but it seems that he hasn't been digesting BSFL well (past few days) so I'm going back to just dubia for now.

Big dish is for food, I mostly feed with tongs or momentarily drop a separate dish into the bigger dish.

He doesn't use the log as a hide (he actually doesn't really use any of his hides, not much of a hider I guess) but he loves going on top of it. He doesn't really like the floor either, he just loves to climb his stick and hammock, but I'll be sure to make more space as he gets older.

Sometimes he gets up in his green plant decor (i didn't put it there for climbing, but if there's a will there's a way) which gets him pretty close to the UVB, should I move it down?
Share:
Facebook Twitter Pinterest Email Share Link 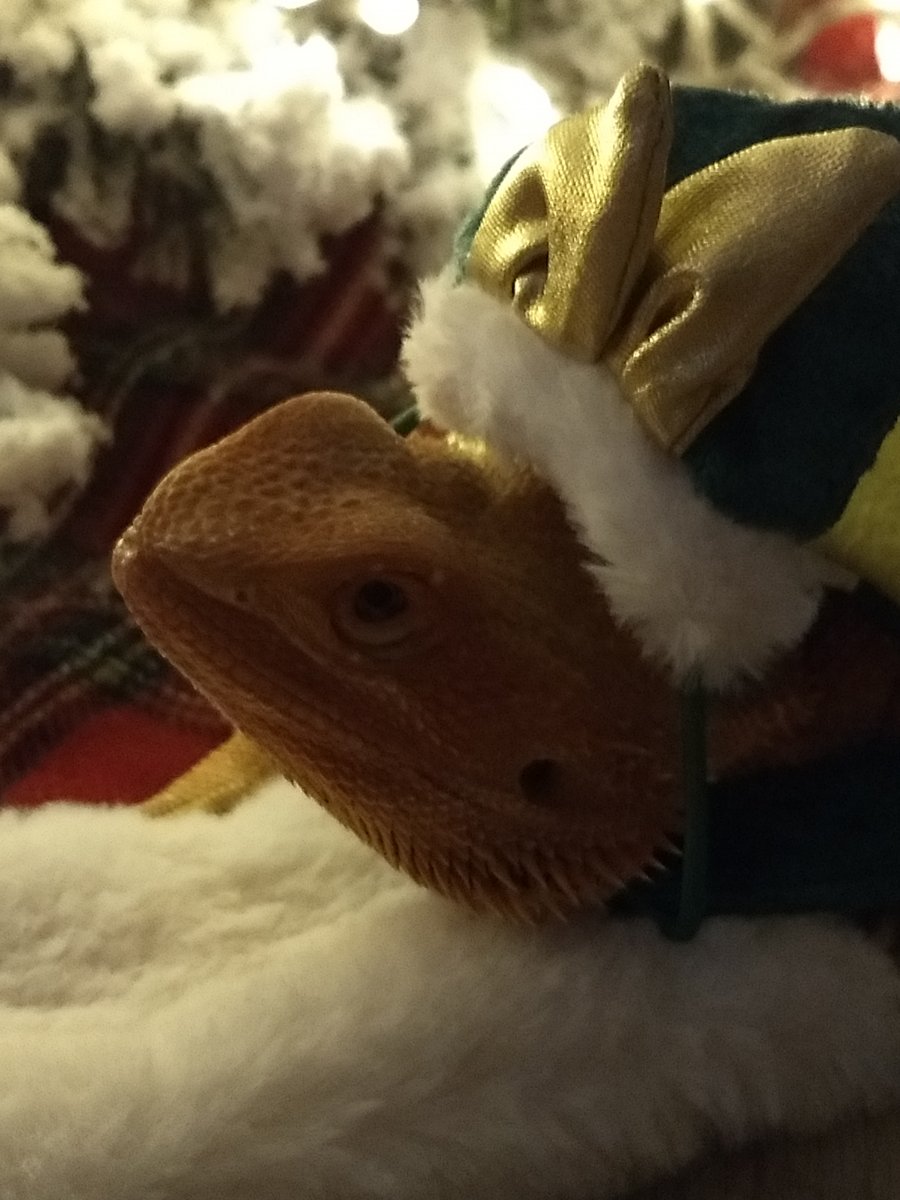