Juvinile beardie will not eat

Hi, i am new beardie owner. She is my first one and had her since February. my juvinile beardie was treated with panacur after they found out from her fecal sample that she had pin worms and coccidia. After the panacur she had another test they said the pin worms are gone but still got coccidia. After two weeks of eating less and less I spoke to others and saw they should have reptiboast while on medication. I didn't know this as was not told by the vet so didn't give her that until a couple of weeks after. It's been 6 weeks since she had medicine and she is hardly eating anything. A wax worm and maybe a few bits of salad/veggies every other day. She won't take the reptiboost or the slurry I make her of veg and dubias. I am at my wits end. I was told probiotics soy yoghurt can help and given her a bit of that which did boost her but still not eating. She was hiding a lot but a bit better now and does bask for a while. I don't know what to do as soon as she sees the syringes for food or water she knows and will not touch it. I don't want to force feed her. Any advice?
K

Yes lets go over the lighting in the tank first --- UVB brand and bulb? coil or tube ? Basking temps should be 95-100 taken w/ a digital probe thermometer - NO stick ons please -- if your using a tube UVB where in the tank is it? top of screen or inside the tank ?
N

Original Poster
Hi its top inside of tank tube light. 32.6c. Up until had panacur was eating and shedding constantly. Her colours are bright. She is very aware.
K

Original Poster
It's a t8. Picture added. She has never had issues before with eating or shedding until she had panacur. I will get a new thermometer for inside
N 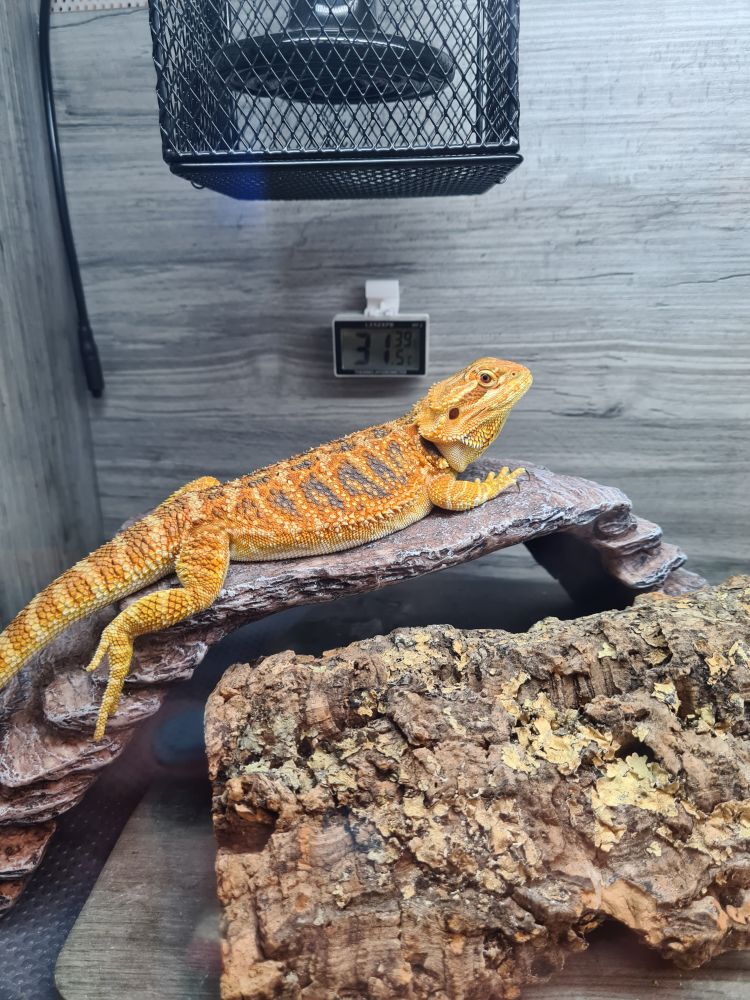 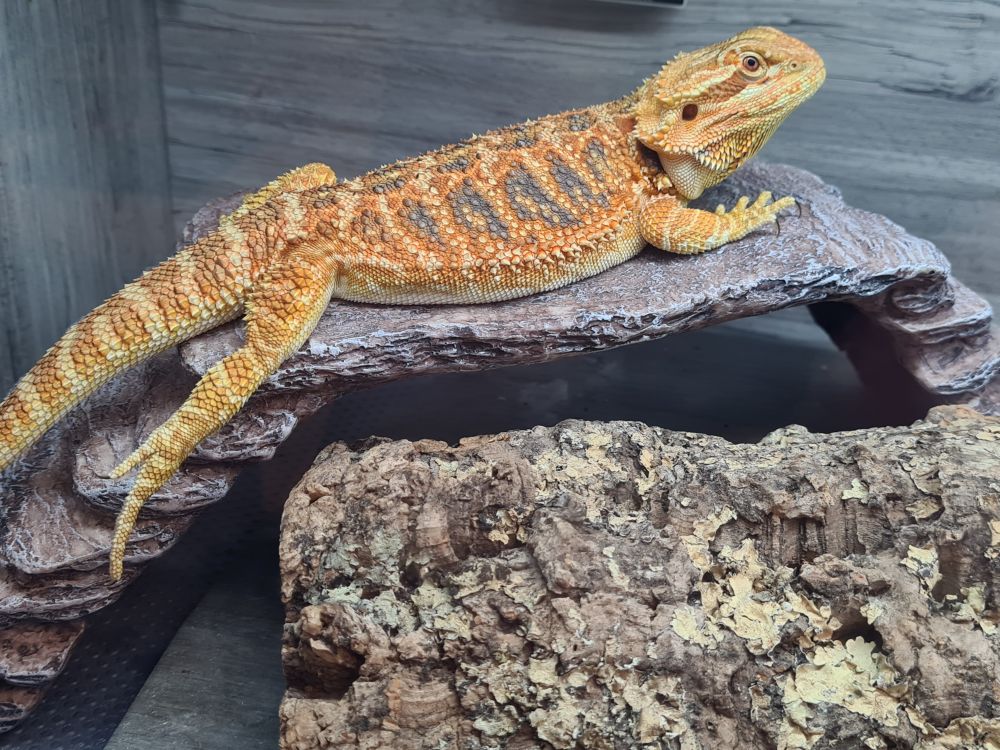 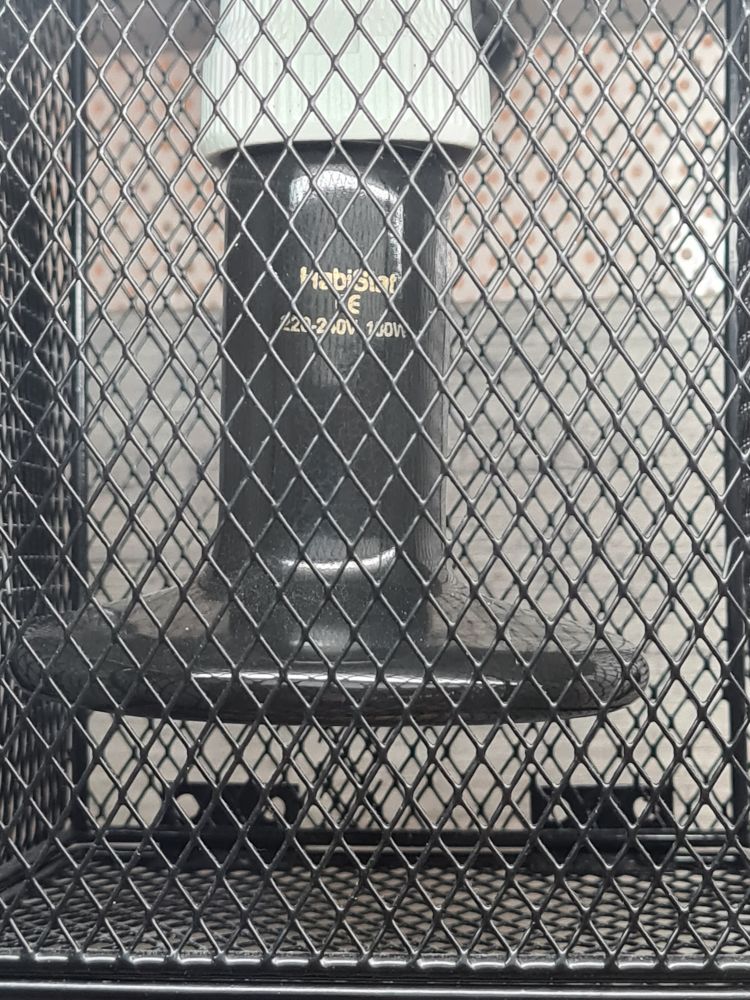 is that your basking bulb? If so please move it or her to a different basking spot w/ this over her or something similar -- https://www.amazon.com/Exo-Terra-Infrared-150-Watt-120-Volt/dp/B01CES501O/ref=sr_1_6?dchild=1&keywords=exo+terra+basking+bulb+100w+single+bulb&qid=1621286663&sr=8-6
this is a 4 pack I would start w/ one for now till you get the correct basking temp -- but you must have the digital probe thermometer ----
Heat emitters are not for basking --- you need a solid bright bulb to start digestion please get this ASAP--- heat emitters are for keeping tanks warm during the nite if temps are falling BELOW 65 -- they can add heat to supplement to get tanks up to basking temps but SHOULD NOT be used for a basking bulb -- they are also good for when dragons are sick and you need warmer temps at nite in the tank -- your nite time temps should be 65-75 NO colored bulbs ---
the T 8 needs to be INSIDE the tank as I posted earlier NO screen in between --- and the bulb should NOT be over 6 months old and the UVB MUST HAVE a reflector -- it needs to be directly over her --
N

Is this what I need?

Original Poster
I have ordered one of the thermometer guns. Do they need more than the t8 inside the viv and the heat bulb? I thought the t8 was all the light they needed? Sorry first beardie so lots of questions. Thank you
N

Original Poster
What do you do put basking light in and then change to coil heat bulb of a night? I don't have a fitting for both
K

No coil bulbs--- take the heat emitter out replace w/ the bright bulb make sure your socket can hold the 100 watt bulb if it's lower it will blow the bulb--- you only need 2 lights in the tank -- your UVB and that bright white basking bulb - you should have 3 temps in your tank--- cool side of tank 80's --- middle of tank 90's and your basking side 95-100--- if you need to get the heat up in the middle of tank use a regular house hold bulb like a 60 watt NO LEDS they don't give heat- where is the UVB and does it have a reflector on the fixture?
K

Original Poster
I don't have but I will get. One of these?

G
Respiratory Infection? Something else?

Jan 17, 2022
Gumipasta
G
L
Bearded dragon will not eat and has pinworms