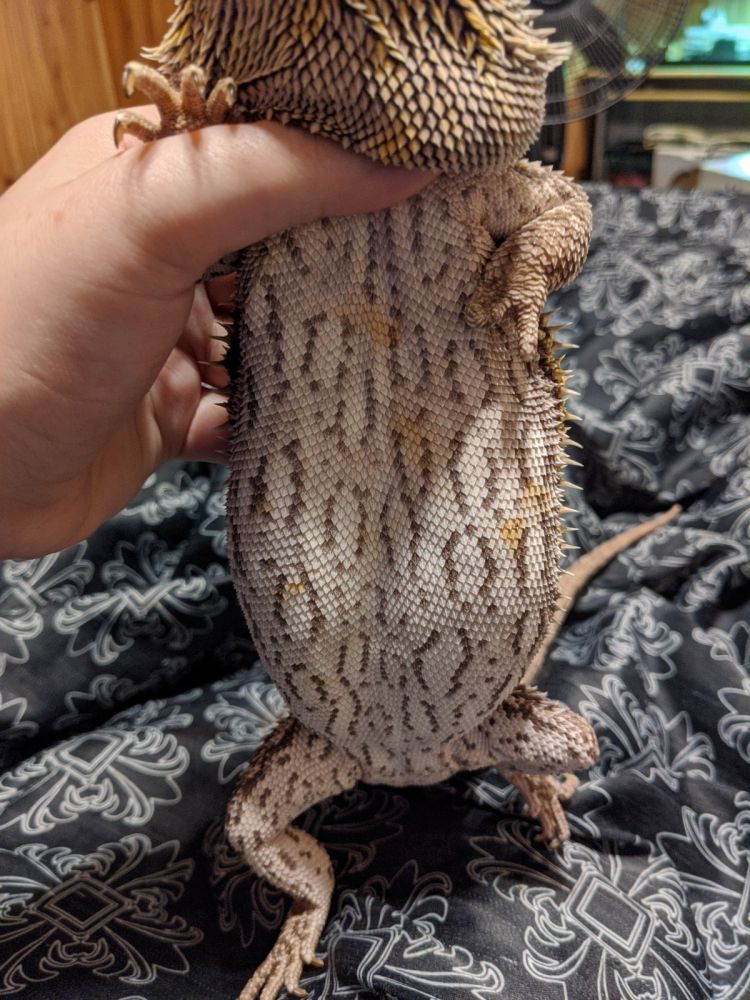 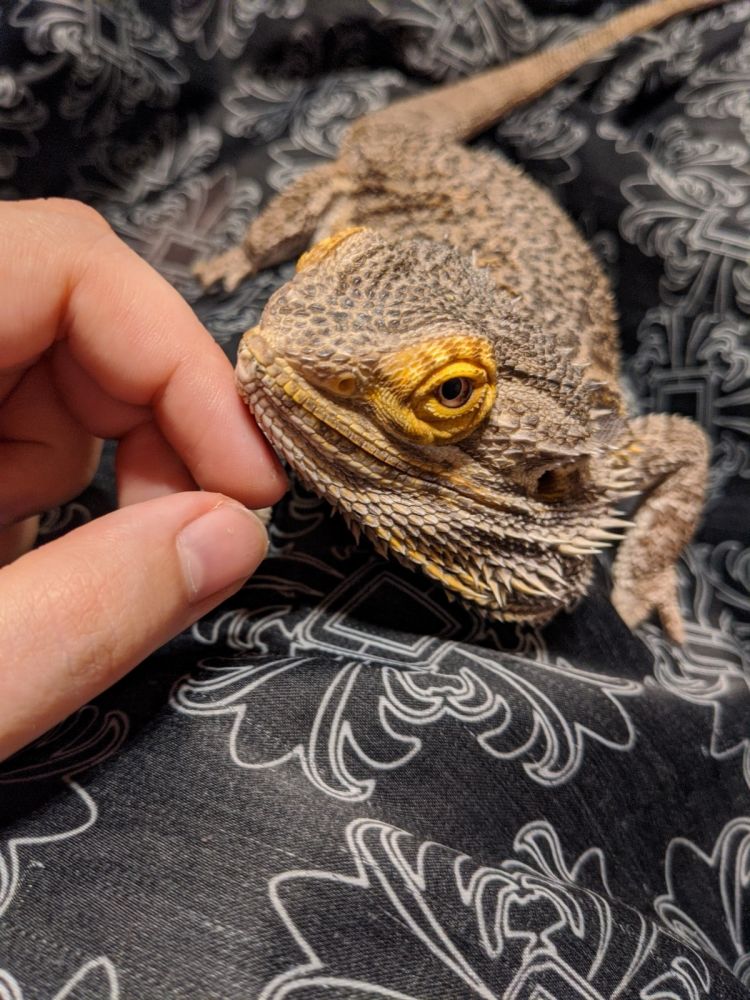 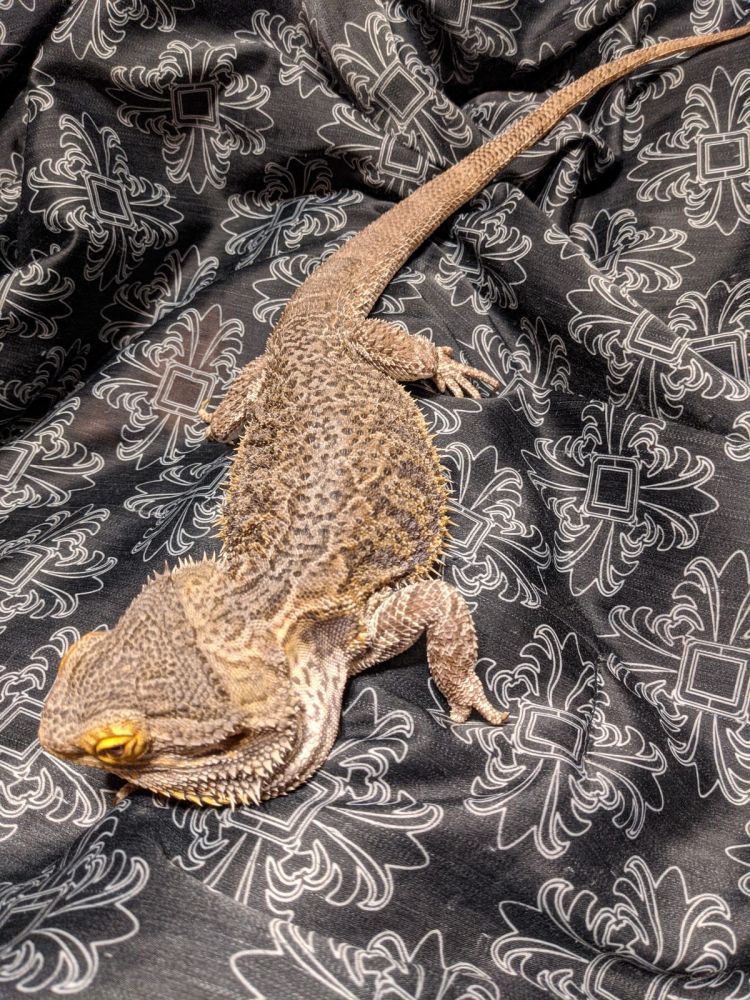 Hello, new to the forums, but about 5 months ago we had started to rehabilitate a family members bearded dragon, and he has been doing very well. He has been eating, gaining weight, becoming more energetic, and slowly becoming less nervous with handling. Even took a MASSIVE 40 gram poop the first week. But yesterday I noticed these yellow spots under his belly, and I am worried if this could be yellow fungus. His previous tank conditions were too cold, no UVB, and sand substrate. Here, he is in a 75 gallon tank, reptile carpet, and a 150 watt mercury vapor bulb. We already have a vet appointment for Tuesday, but just wanted to see what y'all think. I am very worried since I have heard a lot of conflicting information on how treatable yellow fungus is, and we have another bearded dragon kept in a different tank, so worried for her health as well.
We had already wanted to get a vet to check him over for other issues we have noticed, he seems like he doesn't see very well; when we feed him, he moves his head all around the bug like he is trying to find it, even sometimes sweeping his head on the carpet to catch it, so a bit strange.

Those spots look a bit suspicious but not completely sure. How long have those spots
been there?
For now, you can get some topical anti-fungal cream like monistat or lamisil to put on
those areas to be proactive. Perhaps they are just older, dried up retained shed areas,
but it's hard to tell.
You could also give some probiotics too for help with balancing out his digestive system.
Is he eating well?

Original Poster
I first noticed the spots on Tuesday, four days ago. When I handled him before I didn't see anything, so it couldn't have been more than a week. We give both of them calcium twice a week and probiotics and vitamins once a week, with weekly baths. He eats better than our other dragon, will just demolish a salad when he is hungry, but he does have some issues catching bugs because he acts like he doesn't see very well, really picky about dubias (I think he doesn't like the crunch). But with salads, he eats everything. His behavior hasn't changed either, and the spots still look the same. Also, we don't know how old he is, at least older than 5 years, so another thing the vet can maybe help us get a better picture of.

That is strange, hopefully the spots are not fungal. Were you able to find some anti-fungal
cream to use for him? I am glad he has a great appetite, that's a good sign.
Are you using a good UVB light for him?
Does he actively go after his insects too & have you tried superworms or other softer bodied
worms?

Original Poster
We use a mercury vapor bulb for both heat and UVB, I think they were from zoo med. All we have is hydrocortisone cream, but I don't know if it has any anti-fungal in it, or if it's safe to use on him. As for bugs, he does activity go after superworms and crickets. He misses a lot, but eventually gets them all, just dubia roaches seem too fast for him, and they tend to hide unlike crickets that keep jumping everywhere. I do notice he spends more time lounging in the tank than our other one does, laid flat out where the other is in an alert upright position. But when you take him out, he likes to run all over the floor, and LOVES going outside on the leash, so I don't think he is lethargic. He doesn't like people walking around his tank, so I always thought that it was more of a nervous behavior. When we first got him, if you tried to pick him up he would flatten out and hiss, so he has made a lot of improvements since.
S

Original Poster
Update from the vet today, he said it looks more like staining from food than anything fungal or bacterial, especially since it still hasn't changed, it's not crusty or oily, and his behavior is great. Recommend to just keep watching it and see how it looks after a shed. Also the other things we have noticed seems more of a behavioral habit than anything wrong with his vision, and as long as he still catches the food it's fine. Other than that, clean bill of health for the old man.
S 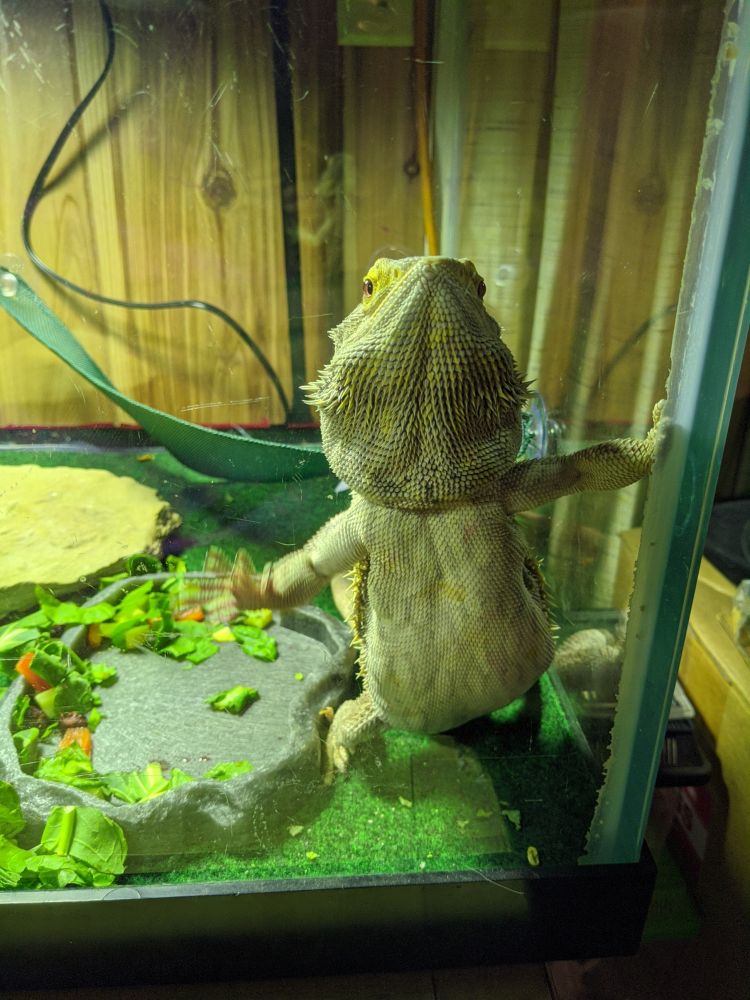 Little bit of an update, it's been about three weeks since he went to the vet, and he is still doing great. No new discolored spots have appeared, and the ones he did have haven't gotten any bigger, or developed any scabs or discharge. In fact, they have faded a little, and as y'all can see from the salad bowl and knocked down hammock in the background, both his appetite and energy are great. Still waiting for him to shed to see if they completely go away, but just thought I would post an update. :wink: