Ayyy I’m back! …With a new twitchy rescue, help.

Alrighty, I’ve been gone from this site for a while so heyyo everyone! I’m back with another rescue beardie lol.

I’ll cut straight to the point lol, two days ago, my mom was looking for reptile tanks for sale, and she came across this beardie for sale, along with a custom made front opening tank. My mom and I fell in love instantly.

We were already looking into getting another reptile, so we got this little dude.

Now, I wasn’t planning on him being a rescue at all, nope, from the pictures he looked pretty healthy and good! But as soon as I got him home I started to notice unusual problems. So now he’s classified as a new rescue beardie that needs a lot of TLC lol.

View media item 60858View media item 61042
His name is Scully! He’s super cute and sweet, b u t, poor dude has some health issues it seems. And he’s really skittish and not trusting of people, yet.

Some quick info about him: He’s a red hypo translucent leatherback dunner, (according to the guy I got him from). He’s absolutely gorgeous and adorable!!
He’s a very big boi at 21” long and 494 grams, Stealing Loki’s title of biggest beardie I own. I have zero idea how old he is, but I’m guessing around 3-5 years old.

Almost a few minutes after I got him home I started to notice, he has a really bad head twitch. It happens involuntarily whenever he eats or moves around it seems. I got a new videos of it, first while he was just basking the first night I got him, second ones were yesterday while I was feeding him for the first time.

Here’s how his head is in a resting type way, both while basking and standing, it’s just.. almost always twitching, which is not at all normal.

And here’s when he was eating; I noticed it gets particularly worse when he eats, and he really has to think and work his brain to even just lunge at a worm.


So, my thoughts on what this could be are a few different things:

2- according to the guy I got him from, he was without heat and UVB for a week or two, so could he have gotten some sort of a neurological damage from being without heat and UVB? It seems like it’s mainly his head but his whole body will shake at times, especially when he’s cold. I’ve been trying my best to warm him up, which he seems to greatly enjoy the heat.

3- One of my reptile friends suggested he might have a calcium/vitamin D deficiency? I was thinking it could be that but I don’t want to give him any calcium until he gets a UVB light. Which we are ordering a Reptisun ASAP, it should arrive within a day or two. In the meantime, I’ve been letting him go outside for a half hour - hour daily. Thankfully the little guy seems to really enjoy outside! He loves to run around and bask and just explore, he’s not scared at all.

So those are my main 3 suspicions of what may be causing this twitch, but I’d like other’s opinions as well.

Along with the twitching, he seems to have some issues with motor skills. He’ll try to climb things a lot but he really can’t climb too well. He’s really klutzy and falls off of things he’s trying to climb, and he seems to have a lot of issues with eating and trying to figure out where to put his tongue it seems.

Don’t worry, I will be taking him to my reptile vet to get this checked out ASAP, as soon as our schedule and the vet’s schedule allows it.

So, he seems to really love to walk around and explore, but he’s incredibly skittish and shy, and really untrusting of people it seems. But he’s starting to warm up to me! It looks like he really wants to trust me, but he’s incredibly hesitant to and he’s afraid. But he seems to be a total closeted sweetheart. He will come up to me at the door of his tank whenever I’m around, wanting to be let out to explore my room. He even fell asleep on my chest for a while earlier. But, he’s still not at all used to handling, he freaks out whenever I try and pick him up, and he will freak out and puff out his beard and hiss at random stuff, so he’s incredibly jumpy. He lets me hold him if I have a blanket to pick him up with. I can work on taking him down/getting him to trust me easily. But that’s going to take some work.

So, my main question is, what in the world do y’all think could be causing his head twitch? He’s currently quarantined from my other 5 beardies until I figure out what’s causing the twitching. He’s in a massive 4x2x2 mediocrally built front opening enclosure. He seems to only want to eat superworms, and only like 1-2. He eats one or two clovers outside but that’s all he’ll accept.

He seems really nice and healthy, except for the bad twitching. He’s super sweet, poor guy’s just shy and shakes a lot.

View media item 60390View media item 60546Here’s the simple makeshift setup I have for him with the random supplies I had left In my closet. The guy we got him from was supposed to give us a ton of supplies for him but he gave them back to his sister the day before, so I had to make-do with what I had.

The tank itself is huge, definitely homemade. The doors are awful and need to be replaced, they’re cracked and super difficult to move. But it’ll do for now.

Anyways, I apologize for my long absence and this incredibly long post (also sorry if I repeat myself a few times or the wording sounds weird, I’m very tired while I write this lol), but yee, I hope this new guy will settle in well here and that this twitching won’t be too big a problem! We’ll see :3

Staff member
Moderator
Welcome back =). You're right that he looks pretty good based on the photos. That's encouraging. The shaking could be a neurological problem or possibly dietary. I would work on getting him into a variety of veges so he can get vitamins and nutrients. Offering a good overall supplement like Repashy Calcium Plus with bugs is also a good idea. Give him some time to adjust to a healthy diet and proper lighting and see if he starts to show signs of improvement. It's probably good to have an atadenovirus test done when you have him to the vet too. Hopefully once he starts to settle into a healthy routine he will start to show improvement. That may take a bit of time though.

Original Poster
Thanks! And yeah he seems to look pretty good, and I’m hoping it’s just a dietary issue that can be fixed with time. He still refuses to eat any non insect foods, aside from that he’s in pretty good condition! And yeah I was thinking an ADV test might be a good idea for him. I’ll look into that, thank you!
A

Nice looking dragon and great looking enclosure as well ! He seems like a happy fella even with his very slight tremor. Along with what Cooper said, his genetics may also be a source of tremors but his are barely noticeable so hopefully it can be corrected or doesn't progress any further. Other than that he looks great !
G

Welcome back home old friend!!! If anyone can do this it would be you! 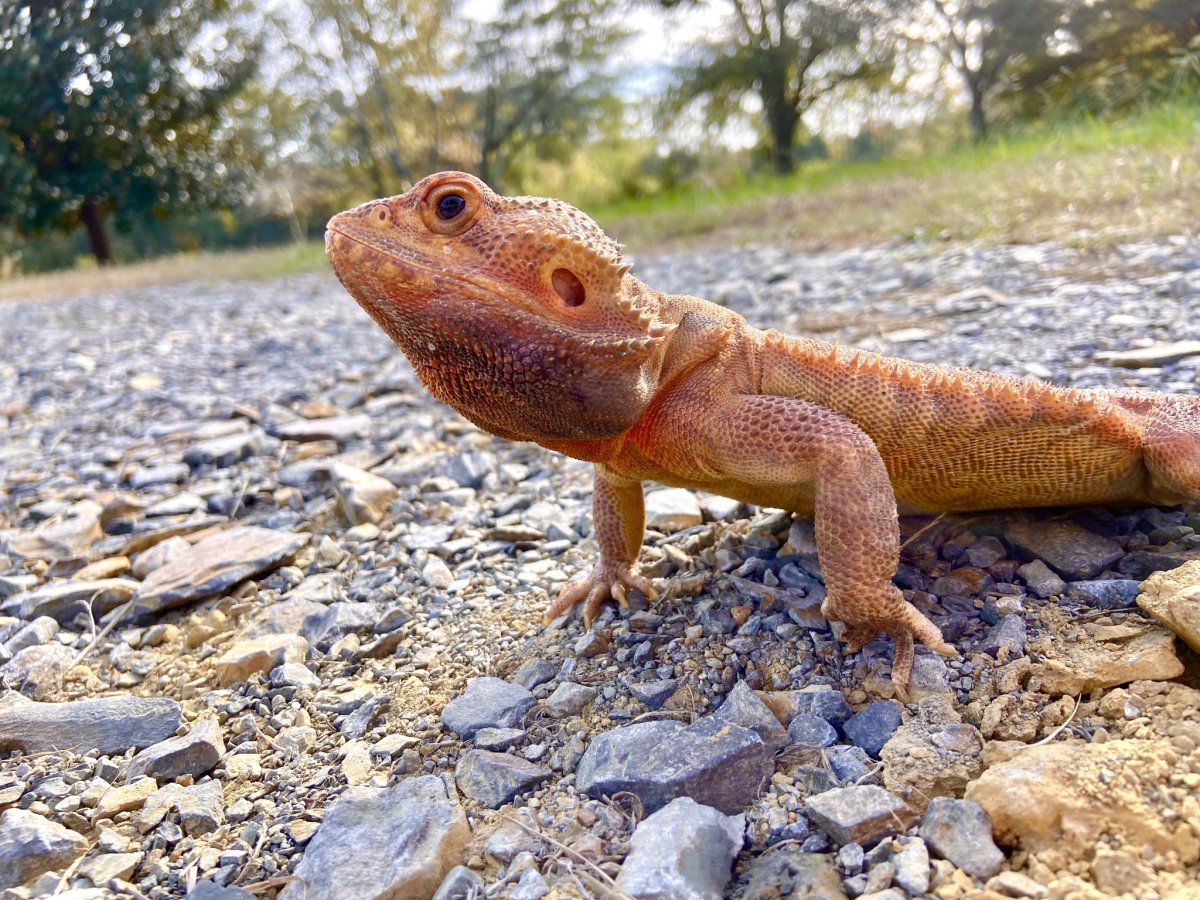 Hey y’all! Sorry for not getting back sooner, been very busy lately lol. But so far Scully has been doing really well! He’s still got some slight head tremors every now and then but they’re a lot less noticeable. He’s also slowly starting to be more active, he LOVES being outside. He is the sweetest lizard ever and loves to cuddle!! Though He only seems to want to eat/explore/poop outside which has been a bit difficult due to it getting so cold here lately, I try to take him out whenever I can though. He still eats some inside but not much.

I also took him to the vet a few weeks ago, I can’t clearly remember everything they said, but we got a fecal and full on bloodwork done on him, the head tremors worried the vet hence why they went ahead and did bloodwork. Nothing out of the ordinary popped up though.
With the fecal he had a ton of coccidia and pinworms I believe which probably explained why he refused to move around at all. They prescribed him with a few doses of panacur for him and some other medicine that I had to give to him every few days, unfortunately I don’t remember the name of it and idk where it went, but I believe it was ponazuril? I’m not certain though lol.
The vet also said they noticed some slight beginnings of mouth rot and stuff with his gums so they prescribed a blue “maxi/guard ZN oral gel” for him to wipe with a Q-Tip on his gums/teeth daily/every other day. I’ve been doing that for about a month now but I’ve lowered it to once a week or less now because his teeth are looking MUCH better. So that’s what’s been going on with my dude.

Idk how the New picture thing works exactly yet, but here’s a couple recent pics of him!!

Staff member
Moderator
That's some professional level pancaking there! I'm glad to hear he is doing so well. He looks happy. It sounds like the vet is on top of things too. The Panacur should take care of the pinworms and the Ponazuril should be effective against coccidia. Both of those tend to be effective and relatively easy on their systems compared to older meds. The MaxiGuard gel is what the vet had me use for Dundee too. I'm glad it's working well on his gums. It's a pretty good oral cleanser from what I've seen, and they don't seem to mind the taste too much. If you can get him to eat some crunchy shelled bugs once in a while, that tends to help clean their teeth and gums a bit as they chew.