Hi all my bearded dragon is 1.5 years old. We took him to the vet because he wasn’t eating as much. The vet suggested vitamin injections of A and D. She said that she has given these injections a lot and that there is no problems. When we got him back from vet his lower beard was extremely swollen and very black (1/2 of his beard was more swollen than the other) the vet said this was not urgent. A couple of days later a noticed a bump on the top of his head. I took him to our local reptile shop to ask for their opinion and they said that he had a bad reaction to the injection and that it is hypervitaminosis. He told us to rush to an emergency vet because many dragons who experience this only live for 3 weeks after the injection. We rushed to an emergency vet who completely disregarded the injection having anything to do with the bump and swollen beard. He claimed that my bearded dragon has a mass and that there isn’t much that we could do. He suggested 3 steroid injections and I declined because it would put more stress on my beardie. He did not even want to take an X ray or ultrasound to make sure it was a mass. I don’t believe that he developed a mass this big out of nowhere and that it had no relation to the vitamin injection. Right now I have been giving him charcoal in hopes of reversing the effects of the vitamin injection. I am completely devastated and I’m trying to do what I can to help my dragon. If anyone has seen anything like this and can offer me any advice I would be very grateful. Thank you for reading my post. I will attach an image. He is quite active, he is alert, he has pooped, he is eating from a syringe. I did also notice that his tongue and mouth have turned white.
C

Tracie or ahbd is gonna haft to advise on this but until they see this what UVB are you using and how far away from the bottom of your tank is it? what is he eating and does he still has a good appetite or is it still gone?
K

Original Poster
Has anyone ever heard of bearded dragons have bad reactions to injections? It has been 2 weeks since his injections and he is still swollen and has a bump on top of his head near the back of his neck.
K

Original Poster
Thank you for your fast reply chestermymunchkin he is in a zen habitat, he has a UVB 34" long T5 from zoomed. Right now his UVB is about 18 inches away from bottom of the tank. We did have it mounted inside but moved him to another tank for a little bit so we had to move it. I can place it inside if it is too far? But it has been mounted inside previously. He has a basking light that also has UVB. His appetite is not so good he will only take a couple of drops from a syringe.
K 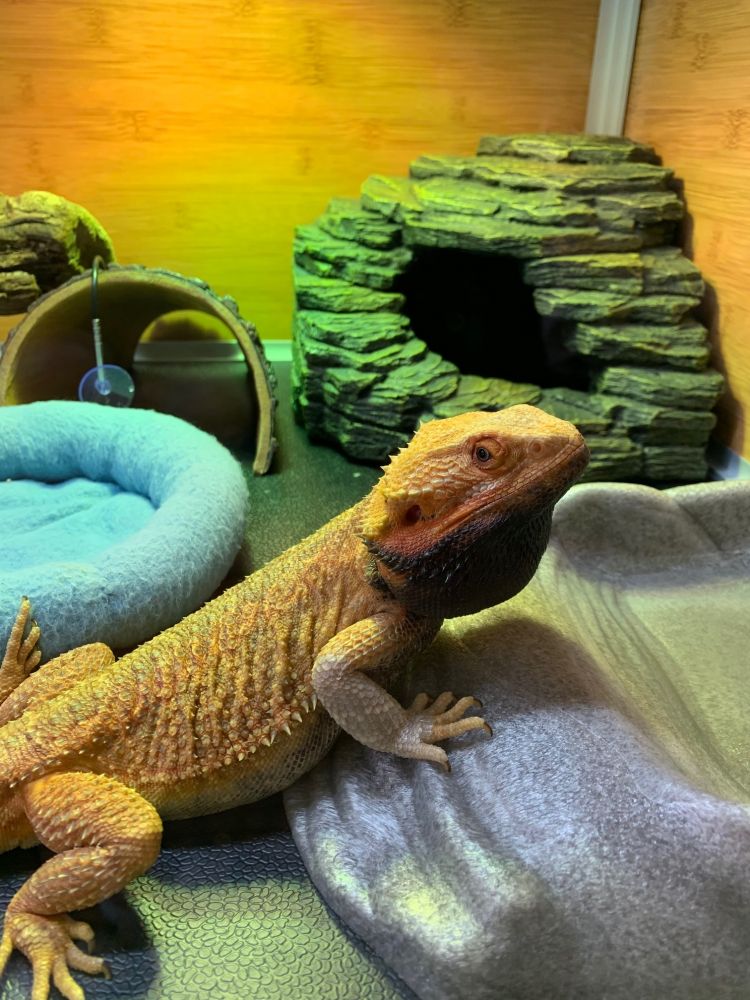 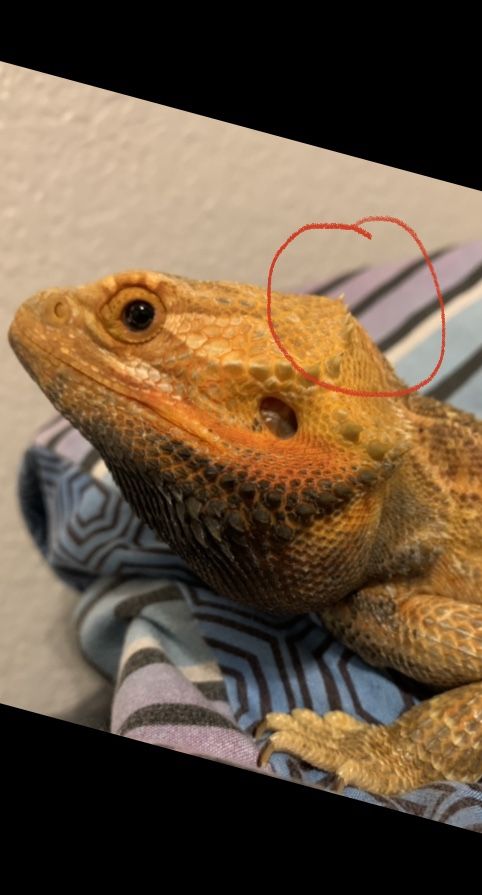 What size tank is he in now? The type of screen thats on this tank? Distance and placement is crucial --
K

Original Poster
Thank you for your reply Karrieree he is in a 4x2x2 zen habitat (120 gallon equivalent) it has front sliding doors on top it has a steel screen.
K

Ok so I have the same tank please put your UVB back inside the tank w/ a distance of 12-15 inches directly above the basking decor piece -- he is in distress or pain that is for sure -- I have flagged the post to both AHBD and Tracie -- the vet you took the dragon to was a reptile vet ? I am posting a website for you to find a reptile vet in your area --- not sure if you can find another one but the one that gave the injections should know what side effects it could cause same w/ the other one -- lets let Tracie or AHBD weigh in on this --- Tracie is on late at nite --
K

Original Poster
Okay I will place the UVB back inside ASAP. Thank you for flagging the post I appreciate it. Yes both of the vets I saw are reptile vets. I am located in Northern California. If you can please send me the website link. Thank you for your help I will continue checking for a response from Tracie or AHBD.
A

Hi there, sorry to hear about your dragon ! I know that vitamin A can cause beard swelling but have never heard of it causing a lump on the head . Get lots of fluids in him and find another vet to do an x-ray of his head. Best wishes to your handsome boy !
K

Original Poster
Thank you for your response AHBD. Do you know if charcoal can help bring down the beard swelling from vitamin A? I was given omnivore critical care by the vet but would this be a good idea to give to him because the critical care contains vitamin A and D supplements?
K

Original Poster
Thank you KarrieRee I found a vet nearby using the website. I appreciate it!
K

Yesterday at 1:12 PM
AHBD
A
T
Bearded dragon's bruise remaining as is, not healing