Last Sunday I rescued this little girl( not sure, but I think she is a she). Thanks to help from a network of beardie lovers I have her safe and sound at my place. She has gained 13 grams in 1 week. This is the picture they posted on craigslist to sale her. I was told she is 1 1/2 years old. She is only 13" long and weighed in at 125 grams. 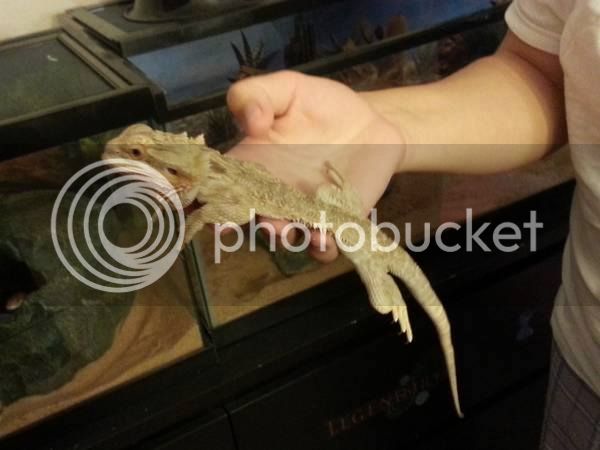 I didn't have contact with the people, I just met them and got her. This is what happened at the vets yesterday.
Ok, so here goes, going to be a long post. I hope I can remember everything about the visit. The minute the vet seen her the horrible look on his face told me he has never seen a beardie in the shape she is in. I told him she is better then what she was when I picked her up. She has gained 13 grams in a week which he liked. He was amazed at that. I told him everything I have been doing and what I have been feeding her and he said it was spot on. In the mean time little Cassie was making her way around the table really fast, using her legs more then when I picked her up on Sunday. He dosed the liquid calcium for her that I had at home, so I will start on that tonight. We decided to do an x-ray, no way around it. He looked her over and I showed him the lump on her back. They took her back and got the x-ray taken and came back to get me so we could look at it. He was just amazed she is still alive. He has never seen a beardie with MBD this bad. I knew it was bad but after seeing the x-ray and we went over it one bone at a time, I really don't know how she survived this long. Her front legs we couldn't tell if they were broken or just deformed because of the MBD, all of her ribs are fractured, the lump is a rib as far as we can tell, she has no bone left in her pelvic area. He is surprised she can even poop, back legs don't look to bad, but still bad. So the plan is keep doing what I am doing adding the liquid calcium, and all the other stuff I syringe feed her, give her roaches 3 times a week, very small ones since her jaws are like rubber and she can't chew them up like she should, I don't want her to swallow them and choke. I need to raise her floor in her tank to make sure she gets the heat like she should. I want to raise her temps up a little more. Cassie is a little miracle that shouldn't even be alive right now, but she is and she came to me for a reason and I will do everything in my power to make her as well as can be. We are taking it one day at a time and see how she does. The vet said the arthritis later one might do her in, but we will deal with that when/if it happens. right now both her and I will fight to the end to keep her as healthy as can be. She is way more active today then when I got her so I must be doing something right for her, and she shows the improvements too.

Pictures of her a few days to a week later. 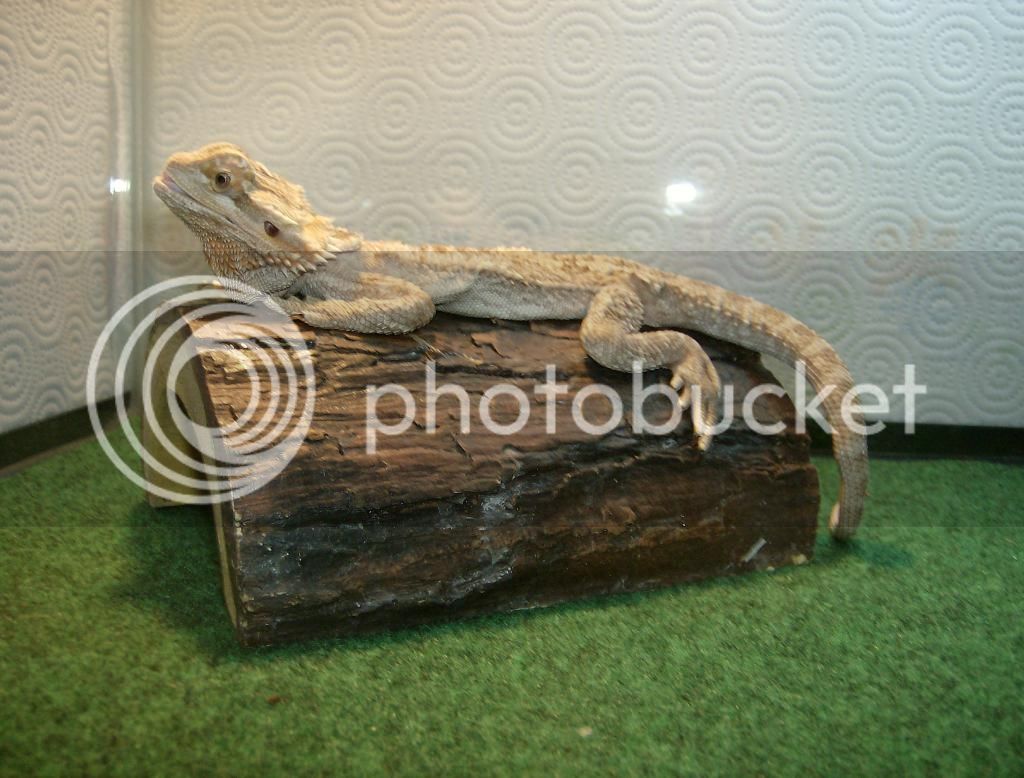 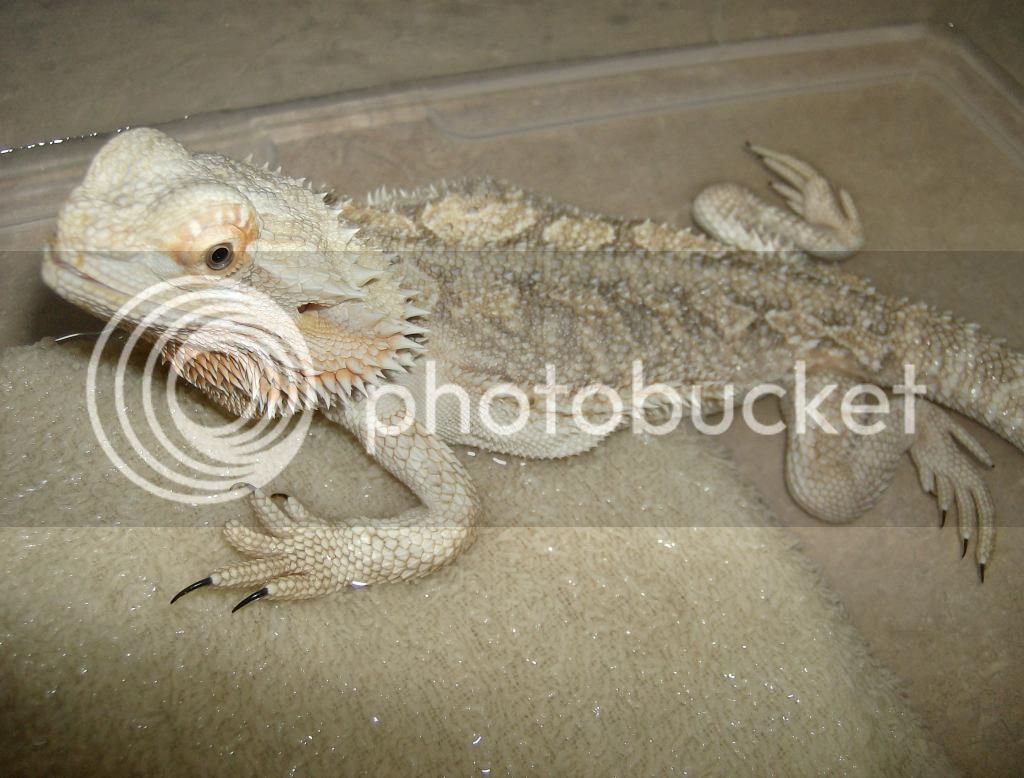 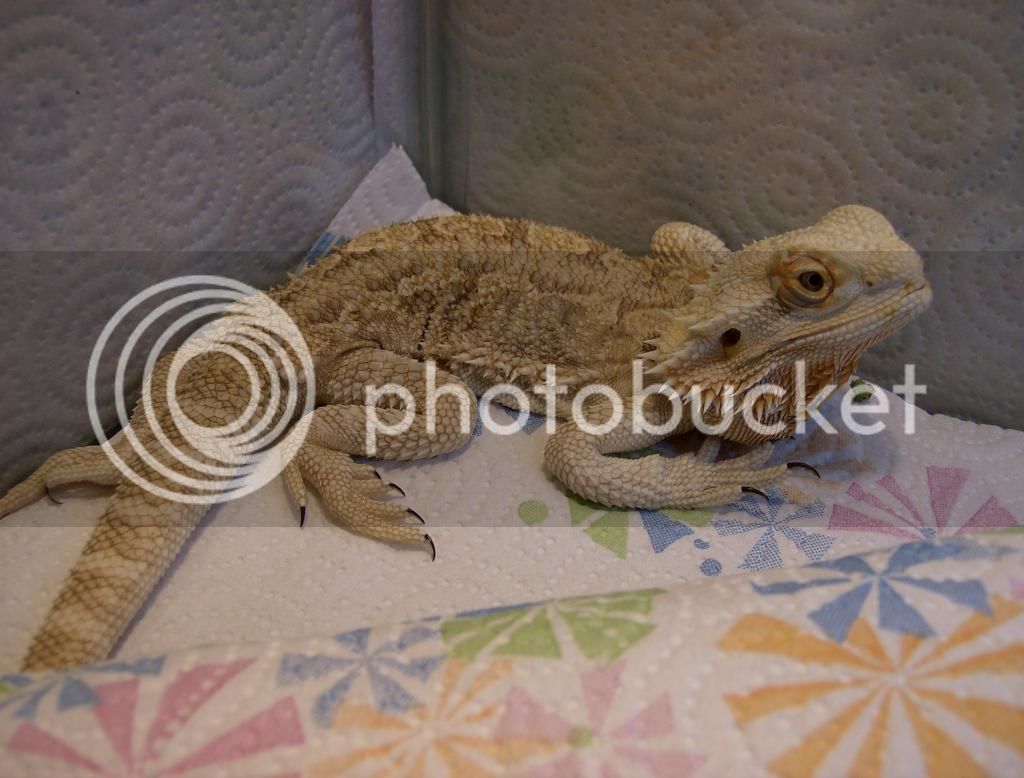 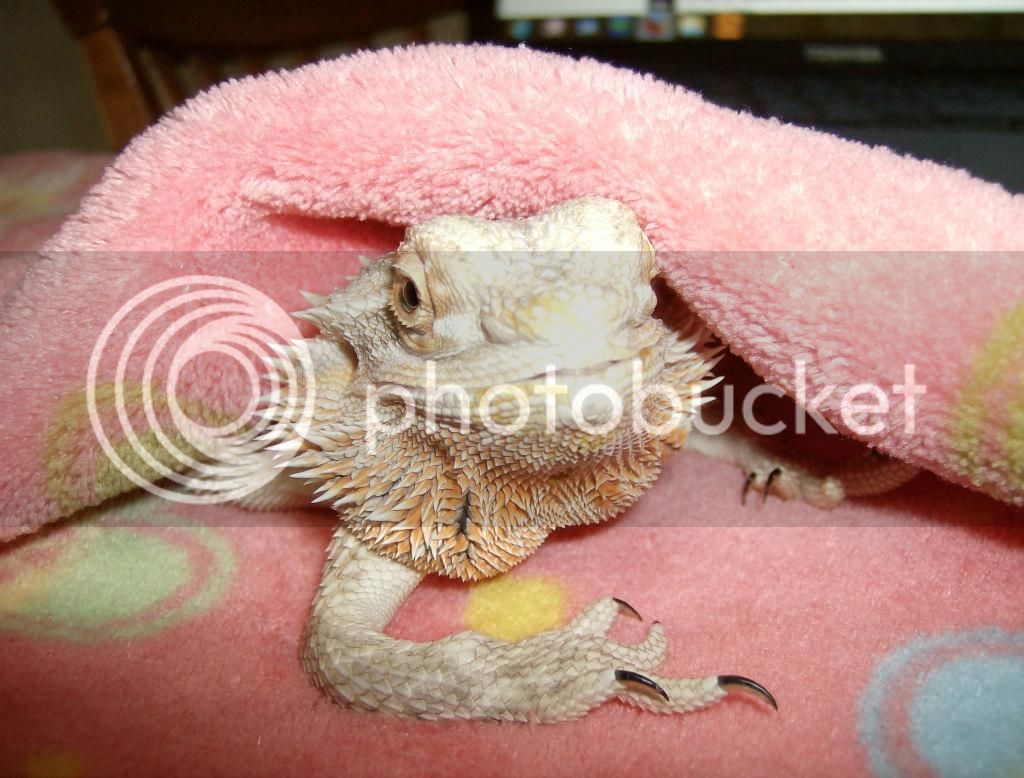 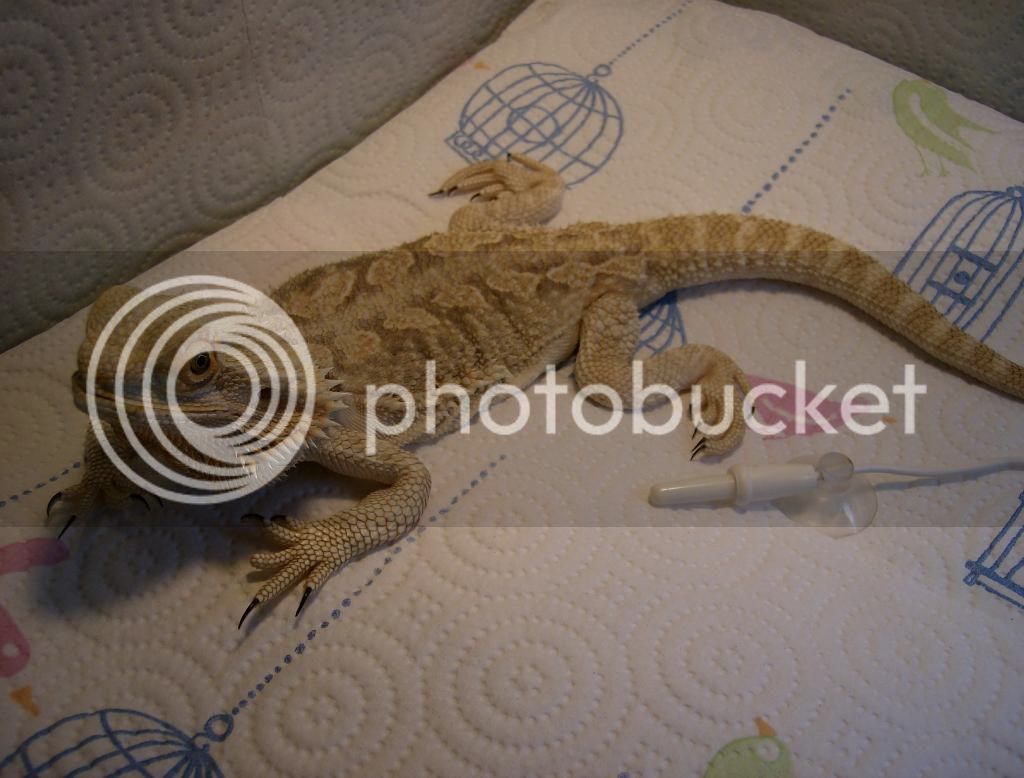 Wow! I can't believe she survived this long! What a lucky girl she is! She looks so much better then when you first got her. I can't believe her previous owner let her get that way. People make me so mad

Oh my gosh... She is so lucky you got her. She is looking much better. She is beautiful :love5:
Can't believe someone could just sit around and watch that happen to an animal and not even care. I really hope those people don't have any other pets.
S

I really hate people that get pets and then don't give them what they need and then don't bother to at least rehome them to someone who can take care of them. The animals depend on us to keep them healthy and happy. Some people should really have to experience what they put their pets through. Sorry, I just feel so bad for that little gal. Glad she is doing better and hopefully she will have a happy comfy life for the rest of it.
B

Original Poster
She has been starved too and she needs to be hand fed, she can't chase her food. I have had her almost 2 weeks now and doing so good. I have to feed her with a syringe for a while. She gets roaches 3 times a week and I put one in a bowl and have to tip it for her and sometimes it takes a couple tries to get it, but she has gained the weight back. I give her very small roaches because she can't chew very good and I don't want her to choke on them. Time will tell if the calcium and right UVB will help to give her a little more mobility in her legs and jaws.

I hope she does well. She is looking a lot better. She is in good hands now.

Poor poor girl. Amazing that she survived this long.
She has a great home now & I am sure she is very grateful. Definitely be sure she is within 6-8 inches of the UVB for best exposure. Which one are you using?
I agree, she may develop arthritis, but hopefully she will regain some mobility & will be able to move around more freely on her own.
Let us know how she is doing.

Original Poster
Hi Tracie, I have the repti-sun and she can get 7" from it. I have already seen a big improvement with her. We have her on liquid calcium and I made sure I bought a brand new UVB just for her, the other one was about 4-5 months old. I saw this morning that her bottom half of her front legs are no longer flopping around like when I first brought her home. She can't use them but she can pick them up and place them back down. The vet was really surprised she was still alive, but she is doing good so far. I will have more pictures this weekend of her.
T

I would love to see her, please post the pics soon
B

Original Poster
Some pictures, 2 weeks after I got her. 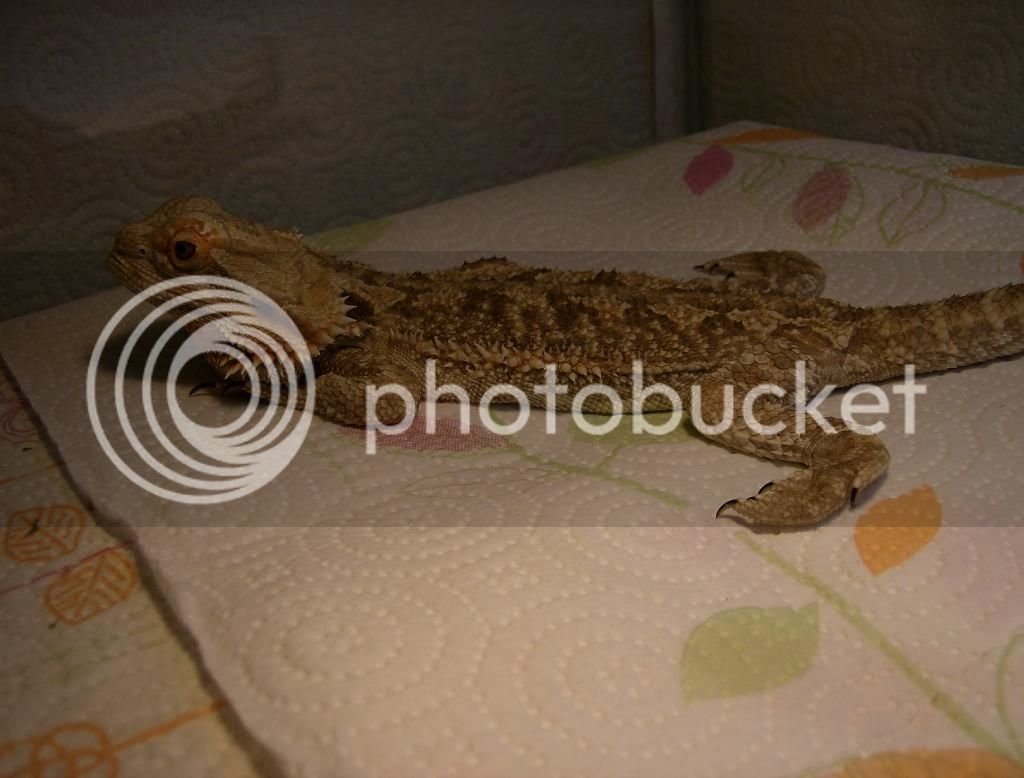 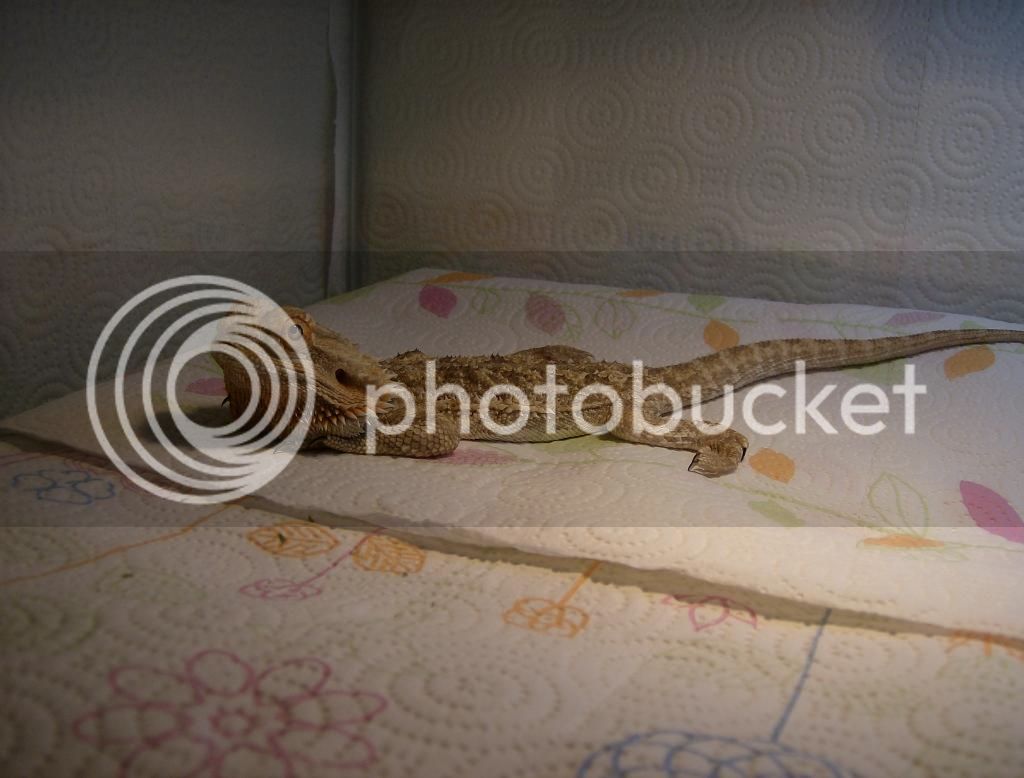 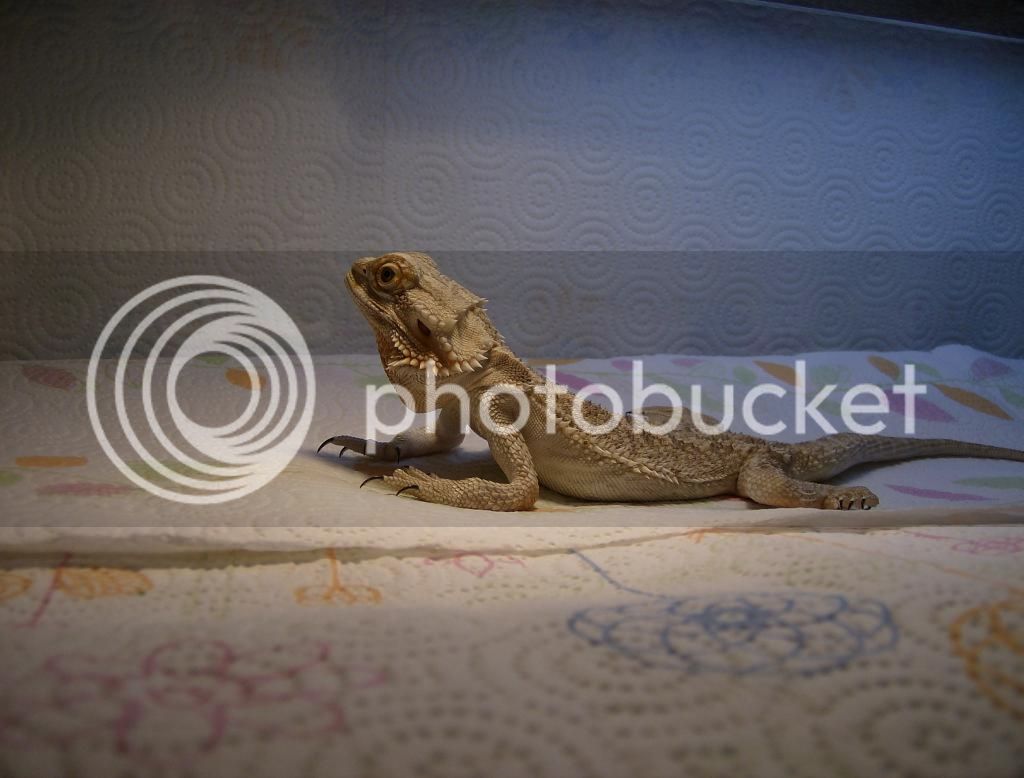 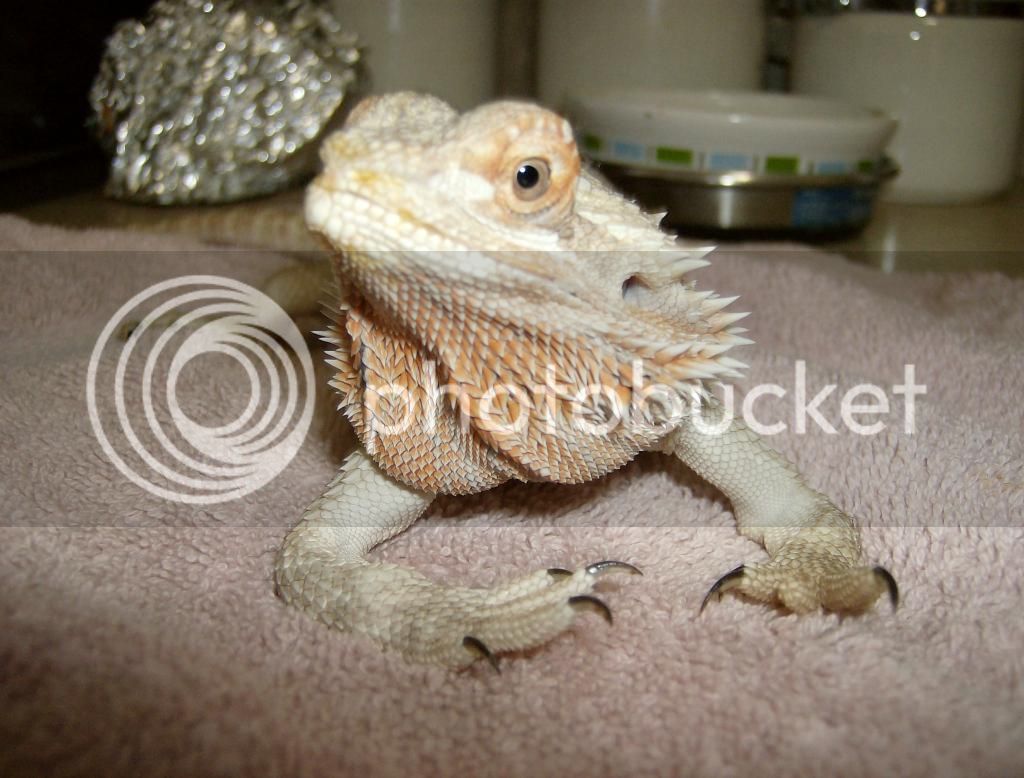 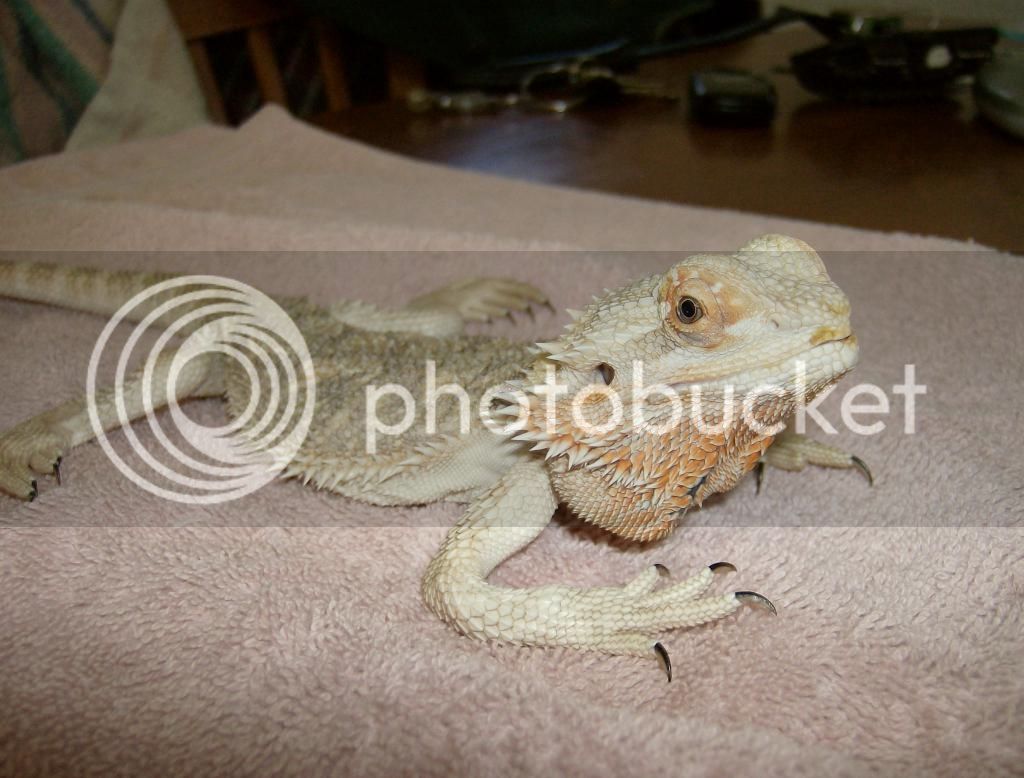 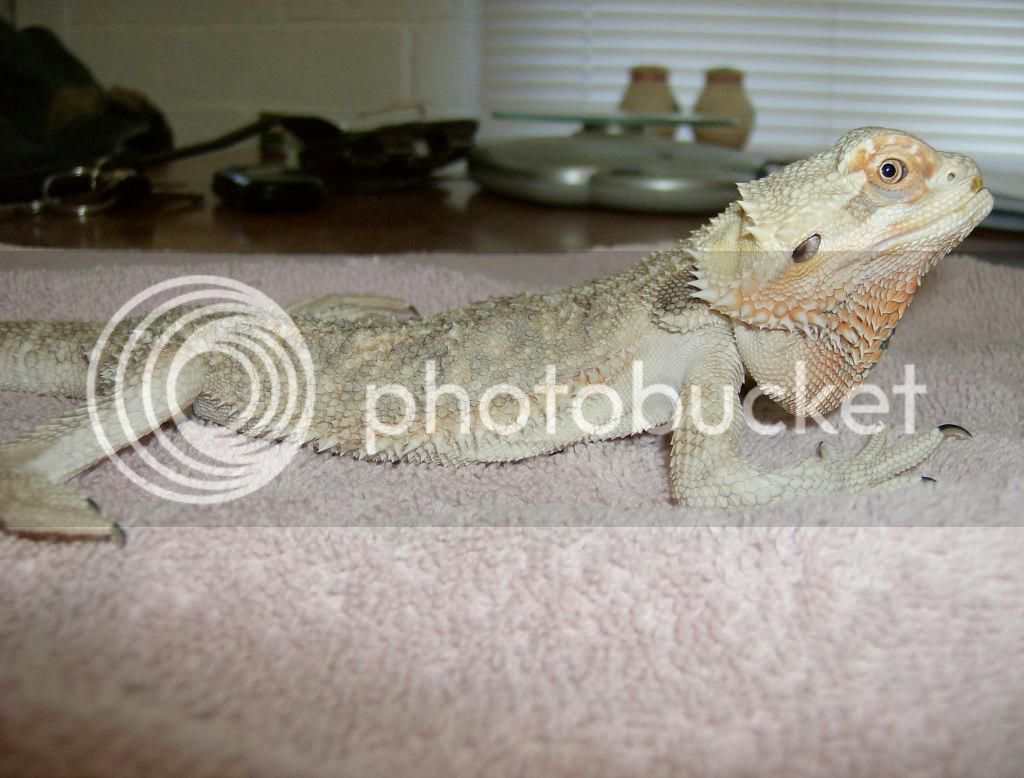 She is looking good, plus she appears to be so sweet.
I hope that she continues to improve. It is going to be a long road for her, but hopefully her spirit will keep fighting!

Keep us posted on her.
Tracie
B

Original Poster
Tracie, she is so sweet last weekend ( only had her for 2 weeks) she got up on her back legs and walked a little, then the other day she got up on them again and stood there for a few minutes. I saw her a few days ago, have one of her front feet on the floor with her elbow off the floor. She is improving so much really fast. My vet couldn't believe she was even alive and has survived like she has, but I keep him up dated too. It doesn't look like she has top teeth either, but we are going to wait to check it out once her bones get stronger. She eats great, I feed her very small roaches in case she chokes on them.
B

Original Poster
This is Cassie today. OH gee, she is looking good! She appears so happy also, bless her, she is smiling there in that pic. It looks like she is holding herself up more also!
Her colors are so nice, too. What a spirit she must have. You are doing a great job with her!
I can't believe how much her weight has filled in now.
So she is able to eat small roaches now? That is too bad she lost her upper teeth. All of them?

Definitely keep us posted on her, amazing.

M
Advice? Laid another egg and I'm going away

R
Beardie has hole in back and bumps around eyes