Superworm Care and Breeding, a Step by Step Guide

U put it in there everyday. When you put bettles into new substrate they lay eggs. After 1 week first eggs begin to hatch. And they will eat the same potato as bettles. After 1 month, when you remove bettles, you still keep adding potato.
T

Are the beetles supposed to be as evil as mine? So far I ended up with 14 beetles from 20 worms (the rest died when pupae). Out of the 14, 3 have been killed and another 1 has lost 2 and half legs. They seem to be always attacking each other and unfortunately the stumpy one can´t run away any longer without falling over (which is funny in cruel kind of way). Anyway, just wondering if it´s normal. The mealworms seem to get on fine, not had one dead beetle yet and they don´t attack each other like the superworms do.
G

To be honest i am not really sure if that is normal. Days when i had only few bettles are gone. I have probably 1000s adult supers now, waiting to be pupated. About 100 bettles soo far and i have about 50 in pupation at all times. My suggestion is that you go up to at least 50 bettles, put them on oats for 1 month, add piece of potato everyday and after 1 month you should see plenty of young supers inside.
T

Make sure you give your beetles enough time for their shells to harden up, if you are just putting them straight into a bin with the rest of your beetles when they are fresh... then you'll most likely encounter cannibalism.
P

They´ve all been in there for a couple of weeks now, maybe a bit longer. Its just whenever one approaches another beetle then they fight, most the time one of them will run and hide and other times they have a bit a scrap and one gets hurt. It might just be that I have one really aggressive beetle, and because they all looks the same, it appears they that they are all evil. Stumpty is definitely getting attacked by more than one, but that is understandable as it´s easy picking. He´s putting up a good fight though, still alive and has been without several legs for 4 days now.
P

RIP Stumpy They finally managed to finish him off. He lost another two legs through the week, but still kept going, pretty admirable in his determination. Anyway, he´s finally lost today and he´s been chewed up a bit. Strangley enough I´ve not seen the fighting going on for a few days now (other than Stumpy of course), so whether that´s because Stumpy has been their entertainment or they´ve just grown out of it or something I don´t know. We´ll see over the next couple of days.

P.S. I think I might have baby supers, not too sure but I think I have. Definitely have baby mealworms, hundreds of them in fact and they are growing really fast.
T

Yeah, they kinda go after the weak ones.
J

I use a incubator when it is not in use with bearded dragon eggs as a controlled temperature 84 degrees for forcing super worms into morphing. I put them in baby food containers with holes drilled into the lids as a separating container.

Hi, I'm thinkin about breeding Supers for my beardie Scout instead of crickets whose stink is filling up the hall and my bedroom. DX
And anyway I have questions:
1) Do you have to keep moving the beetles every few weeks? Because what I plan is to have three bins, one for pupating/alien worms, one for beetles to breed in, and one for the adult worms.
So I was thinking if the beetles layed the eggs and I saw the worms moving after they hatch or are big enough for me to see moving around, if I should just take a strainer and sift out the babies and put them with the bigger worms, that way I could keep the beetles in their same tank. (((Make any sense?))
2) can you layer the cups with the pupa worms on top of each other?(as long as their all getting air and stuff)
3) Is there a certain tank I should have the heating pad under(thinking of using a human heat pad)? (Tanks as in pupa tank, beetle tank, feeder size worm tank)
4) Can big feeder worms be in with tiny baby worms or will they eat each other? (I plan to have carrots in there everyday if that helps)
5) I think that's it, but are three of these sized containers big enough(with screen on top unlike I used for the crix)
**Edit**Oh and will they be better off in my closet? It's big if I make room. 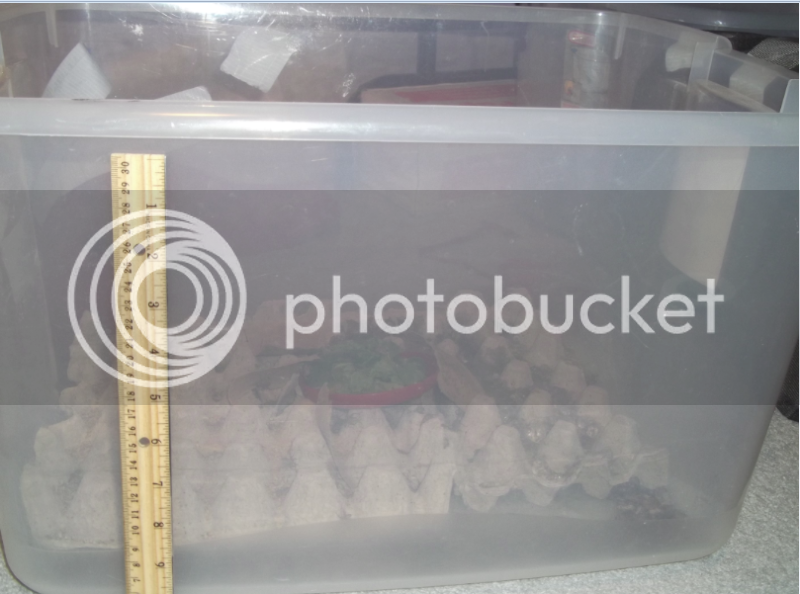 thanks alot for this i just recently started to try to breed superworms. I currently have them in a tackle box (one of those clear ones with a ton of spaces). I can't wait to see when they turn into little aliens.
K

I just wanted to give this a bump.

Planning on trying to breed superworms again soon and this is great information. Thank you to the OP and everyone who commented! All the combined information has refreshed my memory and given me new ideas as well (I haven't been on for awhile and miss the community help here so much!).

This last few months i had huge problem with supers again. I managed to get about 200 bettles ( from my own supers ) soo the plan was to go big this time, meaning 200 bettles producing 1000s and 1000s of supers over the course of months. Well, i put them into new substrate and after 2 weeks it was crawling with tiny supers. Another 2 weeks and i put bettles into fresh substrate. In old substrate at first must have been 100 if not 1000s of supers but after maybe a week, most of them died. This happened with a few fresh beddings in a row. And then suddenly bettles started dying aswell at the rate of 10 a day. I ended with about 30 alive when i finaly realised something is very wrong. Took them all out of substrate on a mesh and washed them with water. I put them into a substrate that has been on under zero temperature for like an hour and also all around the box i put some ducktape to make sure anything trying to get into a box would stick on it, since my main suspect of many dead colonies are mites. Soo far, those remaining 30 bettles seems to be fine, its been a few days, none of them died, they seem very happy and once again they are hiding in their eggcrate ( before, i had like 10 bettles hiding in a crate and 190 were runing around the box like crasy ).

Hm, maybe I should put ducttape around my beetle cage as well..
I actually don't have any beetles yet, but I have er....19 aliens and two more worms ready to alienate at any time. I actually got to see one shed it's skin into the alien!