Sores on the back

Ok it's nothing that can catch her claws-
M

Original Poster
I found some raw honey and let her soak in the bath a little bit to help get the blood off. I had already put some honey on, but I'm letting her soak again. She is very nervous and protective right now, but she's relaxed in the tub. I held a gauze with honey on it against her scratch, which was bleeding pretty good, but the scratch is only the size of one of her spikes on her side. Some blood had pooled on her belly just under the scratch, about a dime-size section, but I was able to get it off in the tub and it had congealed so that made me feel better.

When I was holding the gauze to her side, she climbed up my shirt and hissed, which she had never done. She was in my lap, but my son kept coming in to check on her and our little dog was on the other couch, so I think Jupiter was just anxious. That's why I put her back in the tub for a couple of minutes.

I'm about to get her out and re-apply the honey, then I'll put her back in her cage. We had to take out the rock to clean it while she's in the tub.
M

Original Poster
Once we got her cleaned up she looks a lot better. She actually lost a lot of shed in the bath, so that's good. Her cut doesn't look as bad and she has calmed some. After a few minutes she was done with the bath so she came over to me and tried to climb up so I would get her. After putting on some more honey I put her back in her cage and she seems to have relaxed a little bit.

Thank you for all the advice. I will keep you informed as things progress.
A

Aw, too bad about the cut ! Once again though, that's nothing more than a scrape on our knee or elbow. You won't need a vet for it anymore than we need a Dr. for a small cut on our finger. For now don't let the kids take her out , she's stressed about something. Can you post a pic of the cut or is it not visible now.
M

Original Poster
I'll see if I can get one, maybe tomorrow. It looked bad until she was cleaned up. It's still bleeding and when she was in the bath she was drinking a lot of water. It's about the size of a single spike, it looks like.
M

Original Poster
Jupiter's cut stopped bleeding! She took a bath this morning to clean off the blood that had dripped out and I had to clean her rock off again. I called the vet and I have an appt for tomorrow for her ear and I'll ask her to take a look at the cut. Jupiter will be sedated anyway so it's a good time to check it without her batting my hand away, so I'll get a chance to see what it actually looks like. Because it's on a spike row, it's hard to see, especially now that it has coagulated. The scab and dried blood is between the spikes, so it's hard to reach it to clean it off.

I have some corn starch just in case, but I haven't needed it yet, and I am keeping honey on the cut and on the sores on her back; they are looking a little better, so thank you.

She's chillin' with me at work today. I'm hoping she'll take the opportunity to run around my office since it's a nice open space. I brought her travel cage, which was her 20g one she started in, so she has a place to warm up and relax.
A

Oh, what's wrong with her ear, can you take a pic of it ? They can have a bit of shed stuck in there which is also harmless and very common. Please post a pic, I'd hate for your dragon to be sedated [ a risk in itself ] for nothing and also for you to spend money on something that may be totally unnecessary.
M

AHBD":dwubecst said:
Oh, what's wrong with her ear, can you take a pic of it ? They can have a bit of shed stuck in there which is also harmless and very common. Please post a pic, I'd hate for your dragon to be sedated [ a risk in itself ] for nothing and also for you to spend money on something that may be totally unnecessary.
Click to expand...

She had something build up in her ear and it wouldn't go away, so we took her to the vet a few weeks ago. No signs of dizziness or anything, no tilting her head or moving funny. The vet worked to remove it, but some it had hardened enough that it bothered Jupiter when they worked on it. She gave us an ointment to keep on it 2x/day and to do daily swim baths in hopes that it would soften and dissolve over a couple of weeks. She said if it didn't go away, to call and bring her back and they would need to sedate her so they could remove it.

Her other ear is perfectly clear. This is also the only vet in the area that works with reptiles. She loves them and has a 100-pound tortoise at home. She was really good with Jupiter and is trying to be very careful with her.
A

Can you post pics of both ears ? A lot of times people are concerned about leftover shed and it's not anything that needs attention. If you type in " ear shed " in the search bar here you'll see ones like that. Of course once in a while it CAN be something more but we can tell if you post a pic here.
M

Original Poster
I'll try to remember to get a picture and post it. The vet got some of it out last time, but some of it had hardened like a little pebble. I could hear it scraping when she tried to get it with tweezers. That's why she said to try the ointment and baths to let it soften and come free. It's kind of grayish-brown and takes up a lot of the ear. 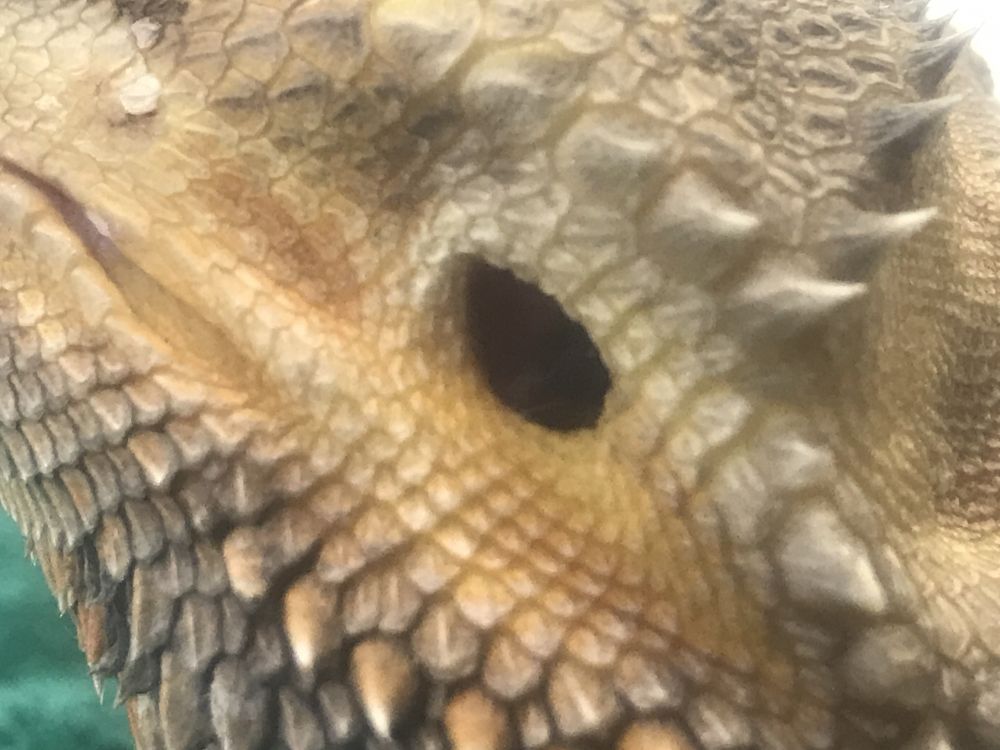 Here's her clogged (right) ear (I had to use a flash so the coloring is different): 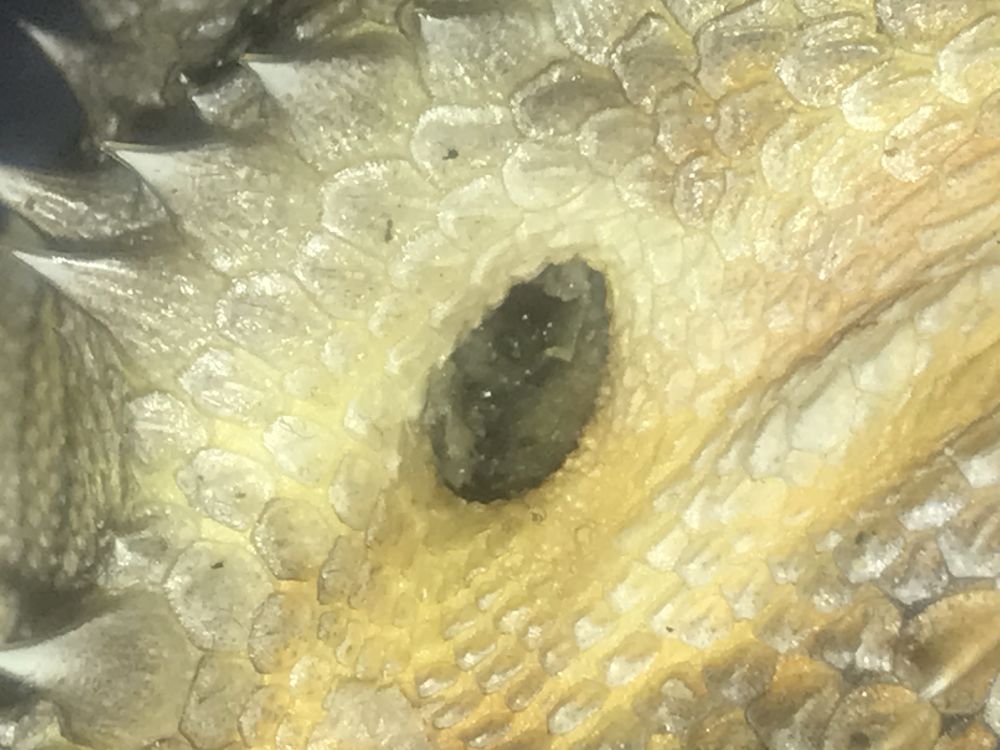 While she was at work with me today it did get warm enough for me to take her out for a little while. She perked right up, ran around and posed like I'd never seen. It's like her instincts kicked in. I had not taken her outside before since I don't usually take care of her. 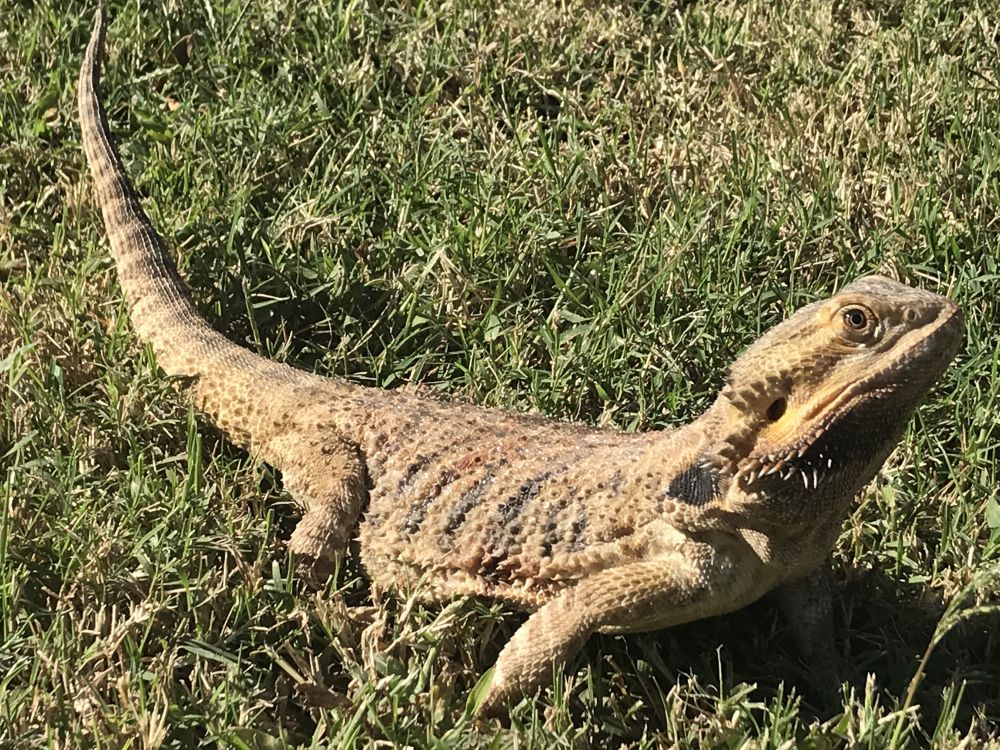 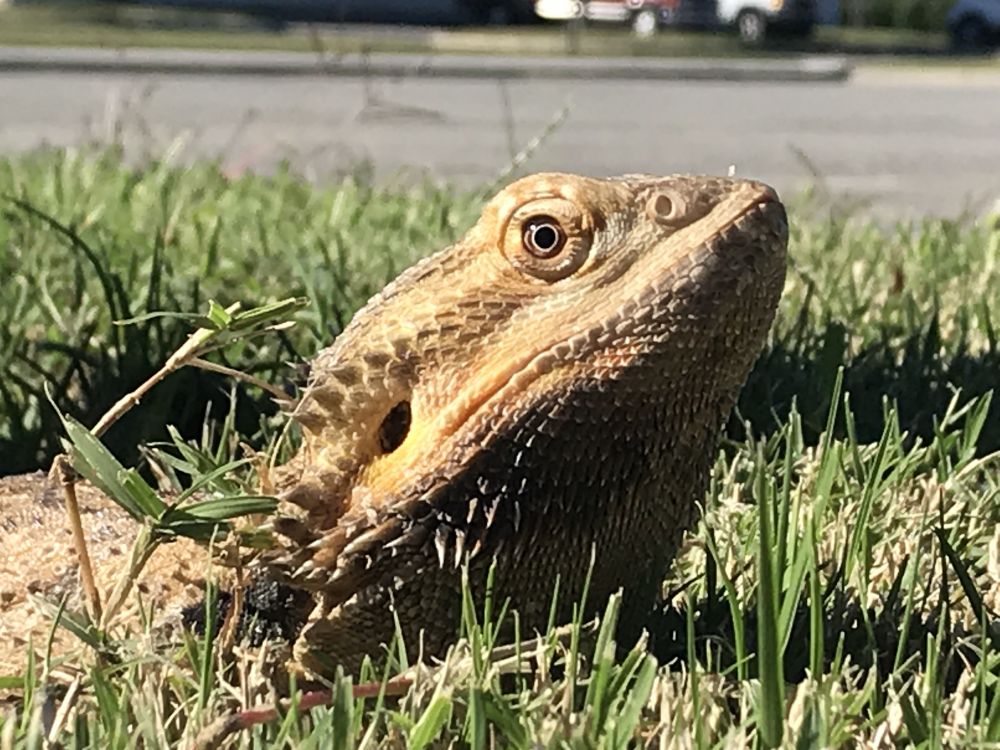 She looks great, healthy and alert outside. Does she ever try to run off ? So the ear just has shed in it, even their nostrils shed but it comes out when it's ready and is not abnormal. Is it wet from water or the ointment ? Here are a couple other threads with the same question about the ear :

She does look very happy there!
I agree, the ear looks a bit strange right before it sheds so I wouldn't worry too much
about that area. It should shed off eventually.
It looks like she had a great time outdoors, too. Outdoor time does a lot of good for
their moods most of the time.

Let us know how she is doing.
Tracie
M

Original Poster
Jupiter went to the vet this evening. She said to begin using the ointment again for her ear and that it looked better than last time, so that's easier. she didn't sedate her and just tried to pull at it a little. She sounded confident that it would work itself out. We have a followup appt in 3 weeks.

For her back and side, she said to soak her in a betadine solution 30min a day and then I'll get an antibacterial spray from her when it comes in, to apply twice a day.

And she said to clean the cage out really good since we don't know what caused it. I'll do that tomorrow. Our son usually cleans it every week, but sometimes he likes to take shortcuts and he may be doing that with her cage sometimes, too.
M

Original Poster
She did well this morning. I put her in her betadine bath while I cleaned her cage. Her little tub was sitting on a bath mat in the bathroom while I was cleaning her accessories in the tub. She just sat there, watching me or looking around. I had sprayed her cage with the reptile habitat spray, so when I went in to wipe it off I was in there for a few minutes. I came back to the bathroom to get her accessories and there was poop in her bath, but no Jupiter! Uh oh! I had left the door open because I didn't expect her to climb out. She didn't leave the bathroom, just explored a little I guess.

I think she's bonding with me over the last few days as I've handled her, bathed her and taken care of her. She's never been irritated by me and has sat with me several times, but I think now we're friends.

Her back and side are looking better and she seems to be feeling better.
A

Yes, that stuff always works itself out, I think Jupiter will be fine. It's great to hear that she's very comfortable with you, some dragons are restless + squirmy and make it a little harder to bond. I would not soak any dragon for 30 minutes though, that is really overkill for non problematic minor issues. A 10 minute soak tops, you really don't want to make her scales wet for so long, plus they can drink some of the betadine mix and also aspirate water. Watch that she doesn't get out on her own, there's all kinds of dangers for her, swallowing foreign objects is common [ fake nails, rubber bands, small lego pieces, etc ] But all in all she sounds like a great dragon and a real trooper !
Share:
Facebook Twitter Pinterest Email Share Link