Hi guys, I have kind of appeared and disappeared on here a couple of times, it's just always been hard for me to stick with any "social media." I'm actually surprised Instagram held onto me. I don't know if anyone recognizes my name from my last pop ups, but Janeway is still alive and bratty and I have for you all tonight *doubke checks clock to make sure it's still before midnight* a picture of her sitting. I mean actually sitting. Like a dog. And I can't find anything like it on Google or on here, so I guess this isnt something that typically happens.

To be fair, it wasn't intentional. I gave her a couple of late night super worms for putting up with my **** earlier this evening (ie; holding her and giving her gentle pets) and I don't kniw if it's a normal beardie thing or just a Janeway thing, but whenever she eats live feed, she snatches it out of the dish and quickly backs up a few steps while munching. And when she snatched the last worm and tried to scuttle backwards, she tripped...on the carpet I guess, and fell back in a sitting position. She just finished her wormy and then looked at me like "now what?" And my phone wad within arm's reach and unlocked, so I was able to grab a couple of pics. The second one isn't good visually because that's the spot I missed when cleaning recently (you can only tell that spot is dirty from a certain angle), but if you look at her body and legs it's still a decent shot showing that she's sitting like a long scaly dog. 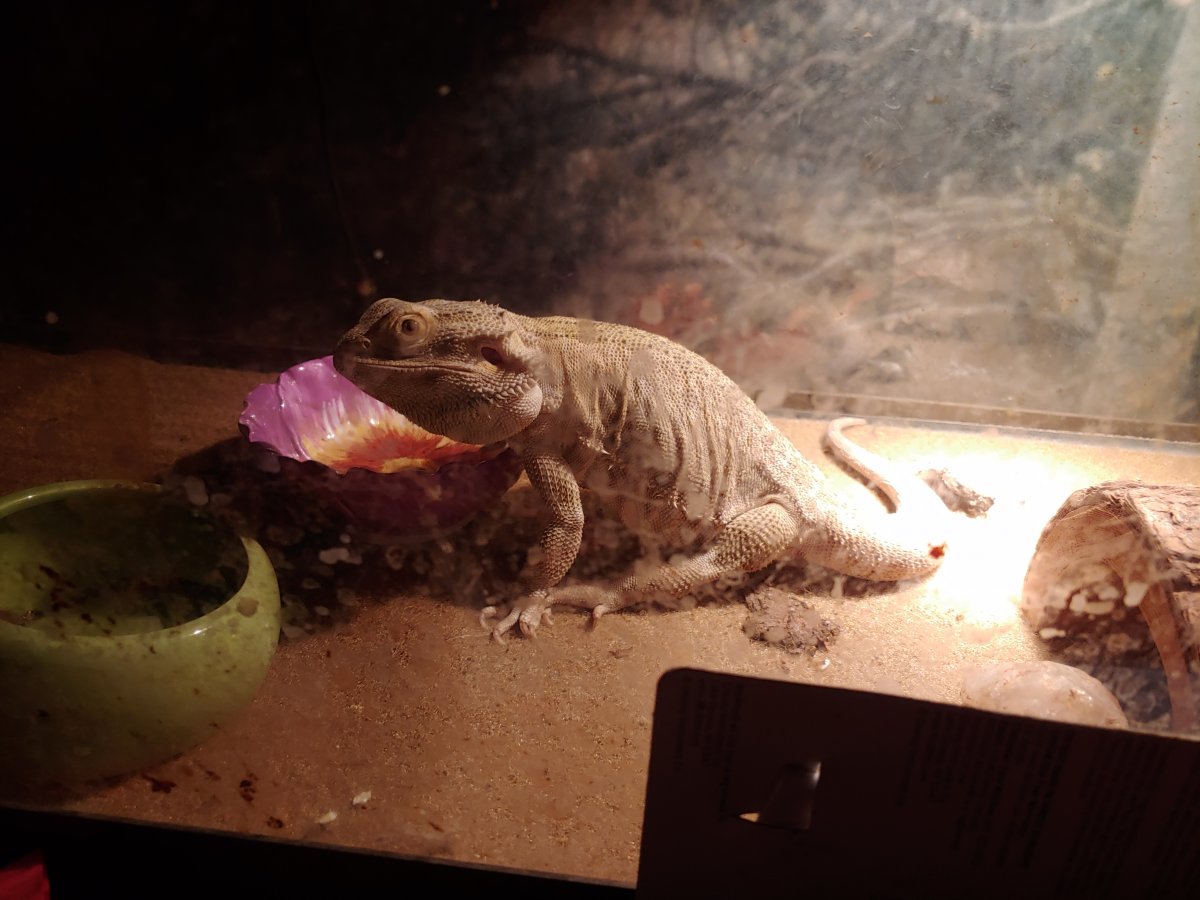 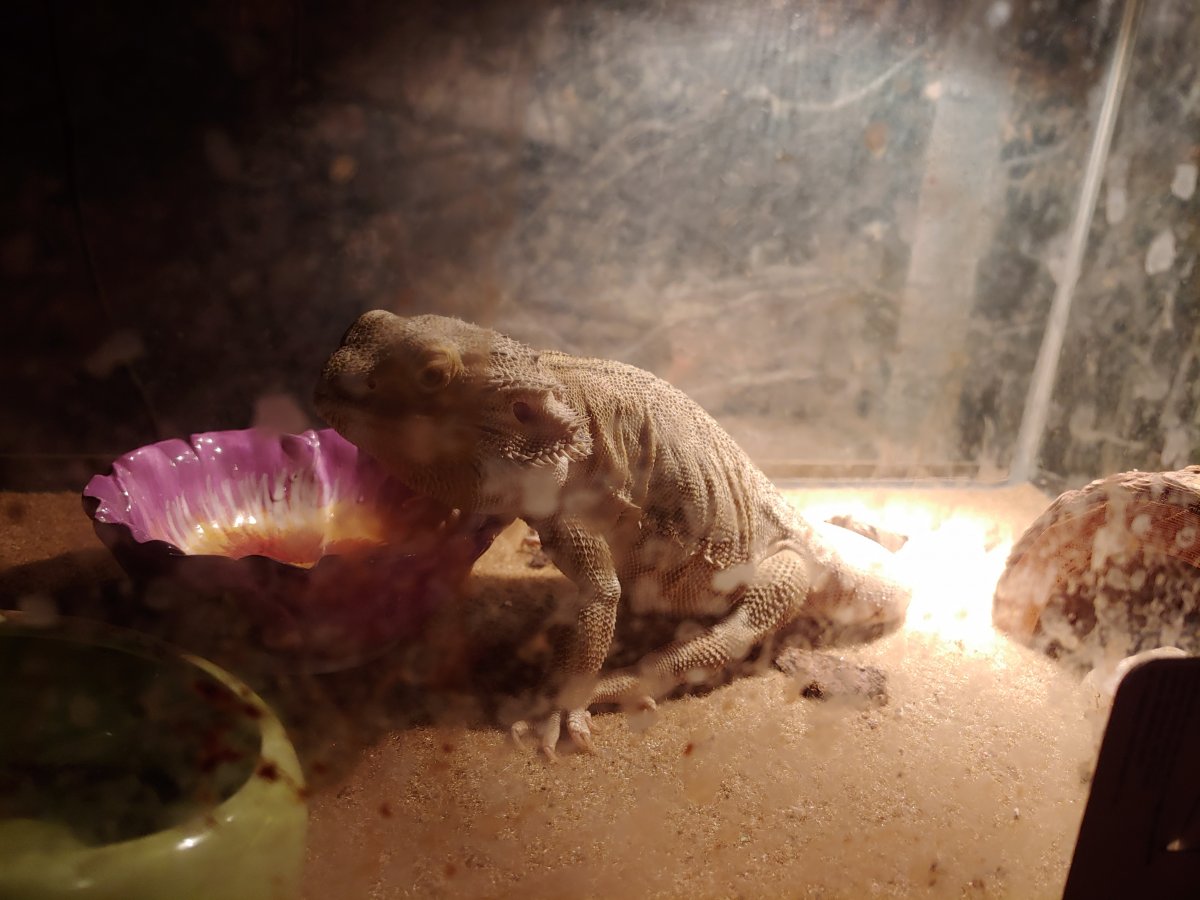 Staff member
Lead Writer
Welcome back! Is Janeway named after Captain Janeway from Voyager? Just curious. That is a funny sitting posture! It must have been surprising to find that the site changed so much since your last visit.

Welcome back! I have to say that's definitely one of the odder behaviors I've seen for a beardie. Otherwise seems to be doing okay?
G

Shinryu said:
Welcome back! Is Janeway named after Captain Janeway from Voyager? Just curious. That is a funny sitting posture! It must have been surprising to find that the site changed so much since your last visit.
Click to expand...

Yes she is!!! Dracona Rae Janeway. If she had turned out to be a boy, it would have been Neelix Montague.

Yes, a little. I couldn't really remember the website so I just googled bearded dragon forum and the first one I clicked on I'm like "this is definitely not it" so I went back and saw the url for this one and I'm like "maybe?" And I clicked and go "I thought there was a lot more green?" So I left but none of the other ones I was seeing were bearded dragon specific websites, they were all sub forums on other websites and I realized that websites can update and change, so I came back and ran a search for a post I remembered making and there was my user name. "There it is!"

It is really nice to be able to post my images directly now and not have to navigate that weird image uploader.
G

beardie said:
Welcome back! I have to say that's definitely one of the odder behaviors I've seen for a beardie. Otherwise seems to be doing okay?
Click to expand...

Oh yeah, just fine. She just tripped and fell back on her rear and I had never seen or heard of a beardie actually sitting, so I was relieved that my phone was on hand for pics, and when googling turned up nothing like this, I thought you guys might appreciate it.
G

Original Poster
Lol, I sent these pics to my friend from high school, with a herp of her own, a leopard gecko, and she asked if that's Janeway's best frog impression. Now I cant unsee it!

Original Poster
I grew up on Star Trek, Star Wars, and Lord of the Rings. I have a really hard time sitting through the originals with Kirk and Spock though. But I really like Voyager, Deep Space Nine, and Next Gen. Oh and Star Gate but I've seen very little of that one and approximately none of Star Gate Atlantis because I haven't gotten to it.

Shinryu said:
Love the names! So geeky and creative! I'm a big Star Trek fan myself.
Click to expand...

Brandon U.
Looking for advice and recommendations!!
Sunday at 1:16 PM •••
N
norrisjill925
In this post, we've shared some fantastic Clothing brands. They Offer Wholesale Clothing in USA.
Carhartt Clothing Wholesale
Friday at 5:01 AM •••