Severe impaction - what options do we have?

Our girl (9 years old) is suffering severe impaction. We were told it might be cancer, but there’s a chance it’s impaction. We have no means of affording the surgery or even the testing needed to determine the results exact cause. There is a large mass at the back/right side of her stomach (last vet ER said it was in her colon).

We haven’t put her down because she’s still active during the day. So we are using laxatives 1x/day (we were given 6x days worth, this is day 2), bathing 3x/day (with light massaging from armpits to vent, extra delicate around the mass), and switched to a liquid diet. We are confident she is going to begin to decline pretty soon and the mass seems too big for her to pass. The last time she took a solid poop was over a month ago and lately she struggles/strains and only releases very small squirts. We are going through these motions anyways and monitoring her condition, but we fear we will have to put our baby down.

Is there any recourse? Any rescue shelter we could relinquish her to get the help she needs? Even if that means we can’t get her back, that’s better than euthanizing her I think.

We’ve already spent more than we had trying to get answers at 2x ERs but basically the answer is “this mass could be a few things, but we need to test so we know which surgery to perform,” but we can’t afford the testing or the surgery even if we did figure it out. Since she’s still energetic during the day and seems to like the liquid food we are providing (though can usually only get 3ml in her each day) we want to give her the best fighting chance we can, and we believe she could come out on the other side, but we don’t have the means to give her the support she needs.

Is there anything else we could be doing? Anybody else we could be calling? We have 4x days of laxatives left and are going to have to make a tough decision this weekend when it runs out if she’s still with us. We don’t want her to suffer but we also don’t want to cut her down while she still has a fighting chance. If it is impaction is there anything else we could be doing to maybe break up the mass (as opposed to trying to get that tiny vent to pass something the size of a quarter? She had been getting regular checkups and last one was 6 months ago and she was healthy as an ox.

Please respect that this thread is about what can be done NOW, not what could or should have been done months ago. We are in Massachusetts, USA and will travel basically anywhere within MA if it gives her a fighting chance. We’ll do basically anything we can, we just don’t have thousands for surgery that may still kill her.

I do not have a solution for your girl, but I am hoping she comes through this. It is obvious you care for her deeply. I worked in a vet clinic for awhile and learned that as long as they have 3 things: eating, sleeping and playing. If they lose 2 of the 3, their quality of life is gone and it may be time to say goodbye. It sounds like she's still active, the closest you might get to playing. Is she resting easily and eating?

Saying goodbye is never easy, should it come to that. I will keep your family in my thoughts.
T

Original Poster
We kind of play. She’s never been one for toys or playing, but we let her run all around the bed and she’s always trying to jump off the bed so we run around catching her from doing it. She’s got a sixth sense for when we’ve taken our eyes off her even for a second (mostly crying lately) and always makes a break for it. She’s light and sunny when we are doing that with her. When we put her in the tank she turns way dark and lethargic but obviously she needs the heat for any digestion to happen so we can’t keep her out all day. It’s heartbreaking putting her away since we are never quite sure if she’s going to wake up in the morning. She also hates baths, which has made this 3x times a day schedule really upsetting for everybody. We don’t want her to be extra stressed if this is her end of life but we also don’t want to sacrifice what little potential she has for getting better. We just tried to see if she’ll eat even one small cricket (for our leopard gecko). She ate both that we offered her and happily laps her liquid food (once she realizes what we are trying to stick in her mouth). The mass is just so large I don’t think this is even possible to deal with on our own, but she has so much life left in her...
A

Hi there, sorry to hear about this problem. As Sara said, there's no reason to make a quick decision when she is still reasonably healthy + acting normal. What type of lax is she on, Enulose / Lactulose ? You can try some or all of these things : baby food squash, sweet potato, green beans, prunes + canned pumpkin [ no spice. You can add a drop of veg. oil and several drops of raw honey. Extra water mixed in . Then give her only one bath a day for 15 minutes but make it EXTRA warm and a bit deeper than usual. You can also put her on a heat pad with a light covering such as a thin blanket or towel.

BTW, is there anything in particular that you can think of that would cause impaction ? And did you have a blood test done, that will usually give you a good clue if there's stomach cancer because the glucose is VERY high.

So sorry your girl is going through all of this!
Did they not do an x-ray on her if they felt it could be a mass? What could have impacted
her, if that is what is going on?
Has she ever had any infertile eggs?
Did they do a blood test at all?
Continue to give the softer foods, in the case it is some type of impaction. Coconut oil can be
very helpful, mixed with sugar free applesauce & canned pumpkin.
Be sure to keep her around 75-80F overnight to help boost her system right now.
Let us know how she is doing.

Original Poster
Temperature issues. We’ve been having huge problems with our heat and our landlord. Basically the landlord refused to acknowledge the problems so overnight temps were bad. Her staple food has been dubias. We noticed lethargy but figured it was simply due to the low temps. My partner noticed a very small lump about a week ago and then we got her to an ER as soon as we realized it got bigger. No vet has even offered an X-ray. $400 ultrasounds and similar inaccessibly expensive care is what’s been suggested. If she lives long enough her regular 6-month vet appointment is Friday and we are going to ask for x-rays and a blood test, but we still can’t afford surgery even if we do find out it’s “just” impaction.
T 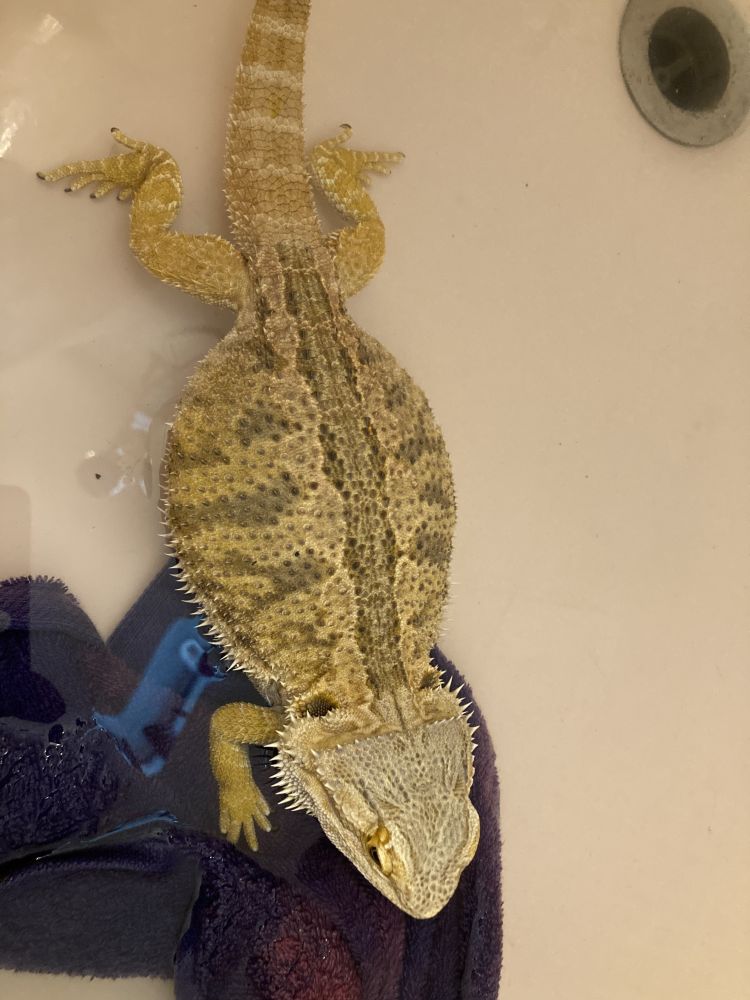 She hates the bath so much. She’s still eating, but the stress marks on her belly have been clearly visible for days (even when she’s otherwise looking good and energetic). She definitely seems to be slowing down. She hasn’t even tried to poop the last couple baths she’s taken even though she’s been on laxatives for 3x days now. I’m gonna try a little olive oil later but we already fed her today and i totally forgot. We are alternating Emeraid IC omnivore powdered mix and an Oxbow herbivore mix that an MSPCA hospital said has higher fiber content each day (we can usually get her to consumer 2-4 ml of it (with another ml ending up all over her face or the floor). The mass is really large and we don’t know if this is even doing any good or just stressing her out. She has so much life and fight left but we don’t have the means to give her the chance she really needs
T 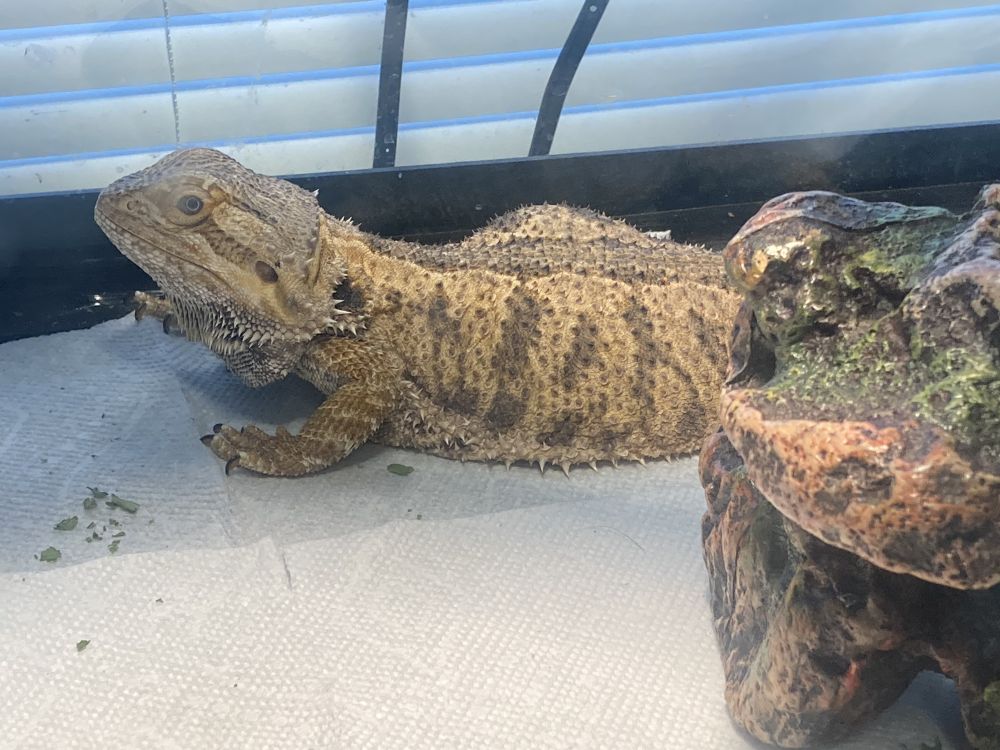 She’s continuing to bloat. You can see on her far side how bloated she is. I’m worried the laxatives are making things worse but I don’t know what we could possibly be doing otherwise...
T

Original Poster
If she makes it to tomorrow she has her regular vet appointment. At the ERs nobody really suggested an X-ray or blood tests, just hugely expensive testing regiments that we couldn’t afford. Hopefully the regular vet will be able to get those both done so we have some answers, but we are still anticipating having the euthanize her soon (if not at the vet on Friday). I knew posting here was probably a long shot anyways, but we are just so desperate for this to end literally any other way
A

The blood test + xray will most likely give you the answers you need. I'm sorry you're going through this. Can you post a full body picture from above ? I didn't notice it being more swollen on the one side before.
T

AHBD":36k5su6k said:
The blood test + xray will most likely give you the answers you need. I'm sorry you're going through this. Can you post a full body picture from above ? I didn't notice it being more swollen on the one side before.
Click to expand...

You can’t really see it from above. The previous picture I posted was of her lying completely flat, you can see how her right side has a large bulge in her middle.
A

Have you tried the baby food squash, sweet potato, unsweetened applesauce and raw honey ? One very warm bath a day that is deeper than what you have in the picture. Make sure it's warmer than usual too. Baby foods help because they're natural laxatives and dragons will eat more of it .
T

AHBD":1ocr8giq said:
Have you tried the baby food squash, sweet potato, unsweetened applesauce and raw honey ? One very warm bath a day that is deeper than what you have in the picture. Make sure it's warmer than usual too.
Click to expand...

We are drawing the bath almost as hot as it will go. We are filling it until she can’t stand freely in the deepest part, that pic was at the end of it. We are giving her 3x hot baths and 2ml of lacrulose laxatives each day. I’ve tried mixing a banana and some olive oil and as mentioned before we are using the critical care powdered food. We have some raw honey, I’ll see if my partner can hit a CVS for baby food after their class.
A

O.K., that's about all you can do to move impaction if that's what it is. Since baths are stressful you might just do one a day.
A

Forgot to add that if this IS a tumor then it is probably pressing on + obstructing the G.I tract in that area. I truly hope that it's not.