Hi all, first want to apologize in advance for a lengthy post, but want to provide as much info as possible so you all can chime in.

I got my first beardie (Edgar) at the end of March this year, and he is now nearly 9 months old, about 19 in long and a bit over 300 grams last time I weighed him. Back in May he started black bearding, having very smelly bowl movements, and acting pretty sleepy most of the day. He starting laying down with his head down for long periods of time throughout the day which worried me. I'll also note that his appetite has consistently been great (nibbles at salad and veggies daily, and loves his dubias which I dust with calcium (5x per week) and multivite (2x per week). But his symptoms led me to taking him for a quick check up at the vet and I brought a stool sample along for testing. Vet said he looked great physically, and not to worry about other symptoms since he's also been repeatedly in shed since I got him.

However, that stool sample came back with "high" counts of pinworms and coccidia. The vet said the counts were 3+ for both, which he said was worth treating. He prescribed Albon and Panacur which I gave as prescribed and brought in a stool sample after meds were complete.

Vet called me back after that sample was run, and reports 1+ and 2+ amounts of parasites still. He prescribed more meds (same meds, different dosages) and I've completed those. Now, the vet also said that sample came back with traces of tapeworms. He was surprised by that, and told me he doesn't know of a treatment for tapeworms in bearded dragons, so just to leave it for now. This concerned me, but put it out of my mind at the time to focus on the other parasites. I'm now at the point where it's time to bring another stool sample in for testing this week since the second round of meds is complete.

However, here's where I want the additional input:
1. Edgar's bowl movements have improved in their smell, but haven't gotten any better visually. They are more watery now than ever. He goes every 2-3 days which has always been the case, his poops now are just extremely watery.
2. His appetite has remained consistent throughout this time, and he's been gaining weight and growing the whole time as well.
3. His energy levels are all over the place. This week seems to be the worst though. He will come out for food only, and then will retreat back into his corner underneath his hammock. It's on the warm side so still about 90 degrees, but he lays there with his head down which he did not do at all for the first two months I had him.

So, I'm hesitant to bring another stool sample to the vet. I'm not convinced more meds are the best next step even if parasite counts are still high enough where the vets wants to medicate. I'm concerned about Edgar's laziness, but I'm curious to hear if maybe this shouldn't be a concern as long as he's eating and growing well?

Husbandry info:
Enclosure: 4x2x2. Most decor was removed when parasite meds started to keep things clean as possible
Substrate: Slate tile and I've swapped to paper towels since parasite medication began for easier cleaning.
UVB: T5 tube about 13 inches from basking spot inside tank. Got it new in March.
Temps: Taken with a digital probe. Cool side 77-80, warm side low 90s, basking spot around 105, but he doesn't spend time there. Even if I physically place him there he will hang out for a few mins, and then go back into his corner under the hammock.
Location: facing the inside of a room (no views to outside), no other pets around to stress him.

I'll include an image of enclosure as well in case anything stands out - you'll see Edgar in his favorite lazy spot underneath the hammock. I just want my little guy to be happy and healthy! Any feedback or advice will be appreciated. 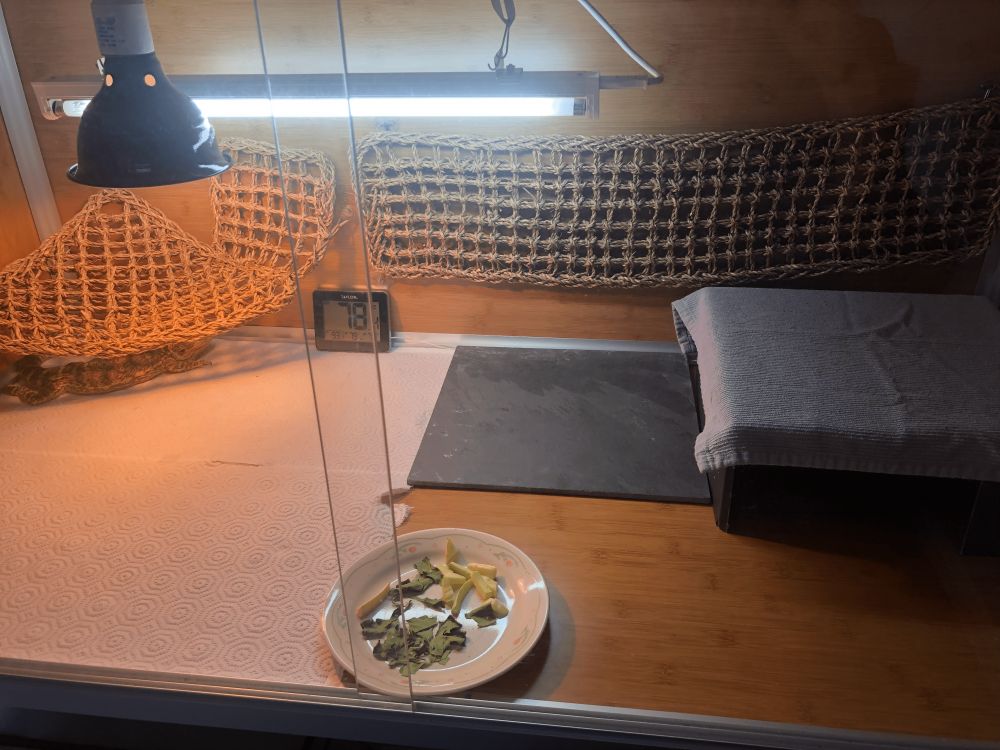 Is the UVB on the back wall and does it have a reflector on it?
S

Original Poster
No reflector, but it’s hanging from the ceiling about 6 inches away from the back wall
K

Original Poster
Ok thank you! I added a temporary DIY foil reflector the other day and will order a more permanent one. He’s already spending more time under the uvb light so I think it’s a good sign
K

How are things going with your lighting?
Adding the temporary foil around the light for reflective help should really increase the UVB
exposure for him. Is he enjoying the light a little more then?
I hope he is doing well today.

Original Poster
Thanks for checking in Tracy. He’s spending a lot more time under the lights, and I haven’t seen him go into his corner for a couple days now. The permanent fixture with reflector should be arriving any day!
Share:
Facebook Twitter Pinterest Email Share Link

K
Kacper
I need help my bearded dragon is acting strange when she eats its like she doesnt feel her tongue she walks in a very strange froggy way not like she used to
Today at 2:29 PM •••

Brandon U.
Looking for advice and recommendations!!
Today at 1:16 PM •••
N
norrisjill925
In this post, we've shared some fantastic Clothing brands. They Offer Wholesale Clothing in USA.
Carhartt Clothing Wholesale
Friday at 5:01 AM •••

JeremyPsychonaut
New bearded dragon owner
I have some questions regarding uv lighting
Tuesday at 10:39 AM •••