I figured I would post some pics of Sarth...even though he hasn't been eating very well the past month he still finds every opportunity to be cute! I think I might just keep adding pics to this thread along with my blog, we will see!

The most recent ones are at the top.

I thought this was adorable...he was kind of lounging against the glass, looking at me like "what?!" 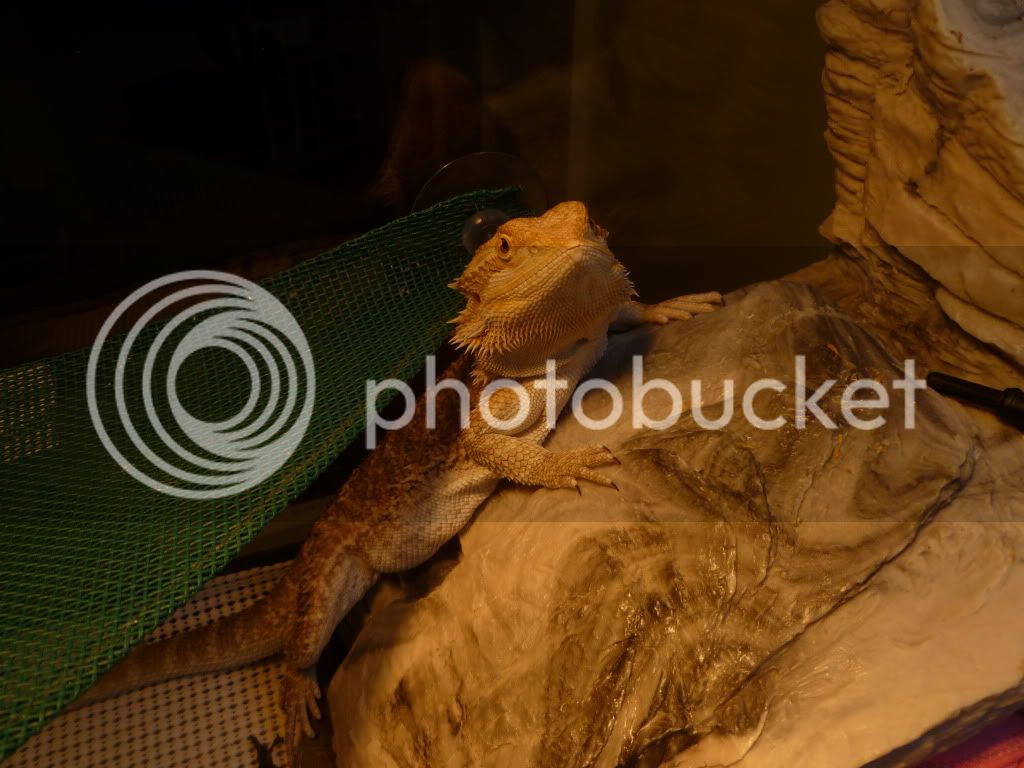 Just trying out a close-up of his face...it's hard to get good pics during the weekdays when the sun is going down by the time I get home 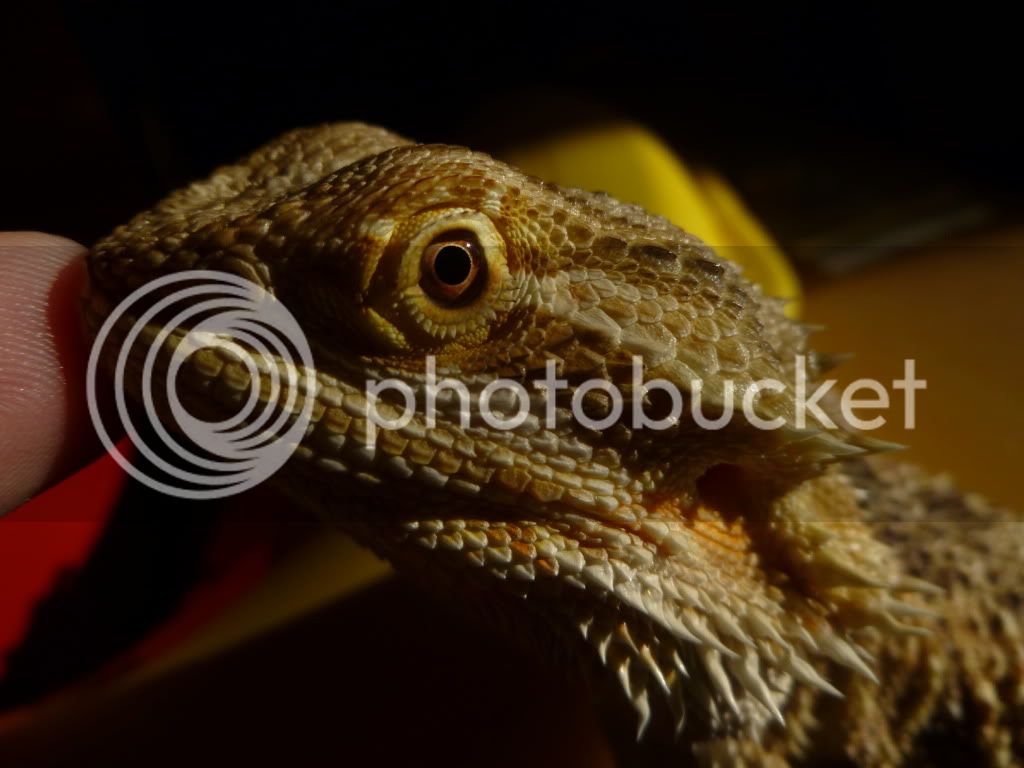 Scoping out his rearranged tank 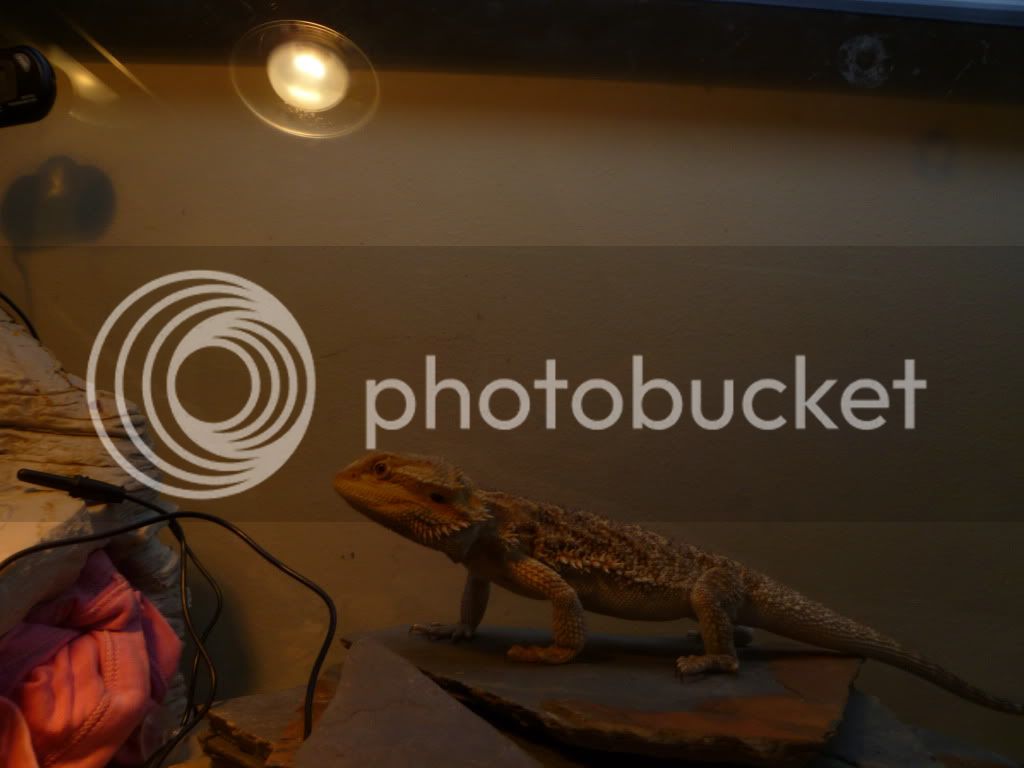 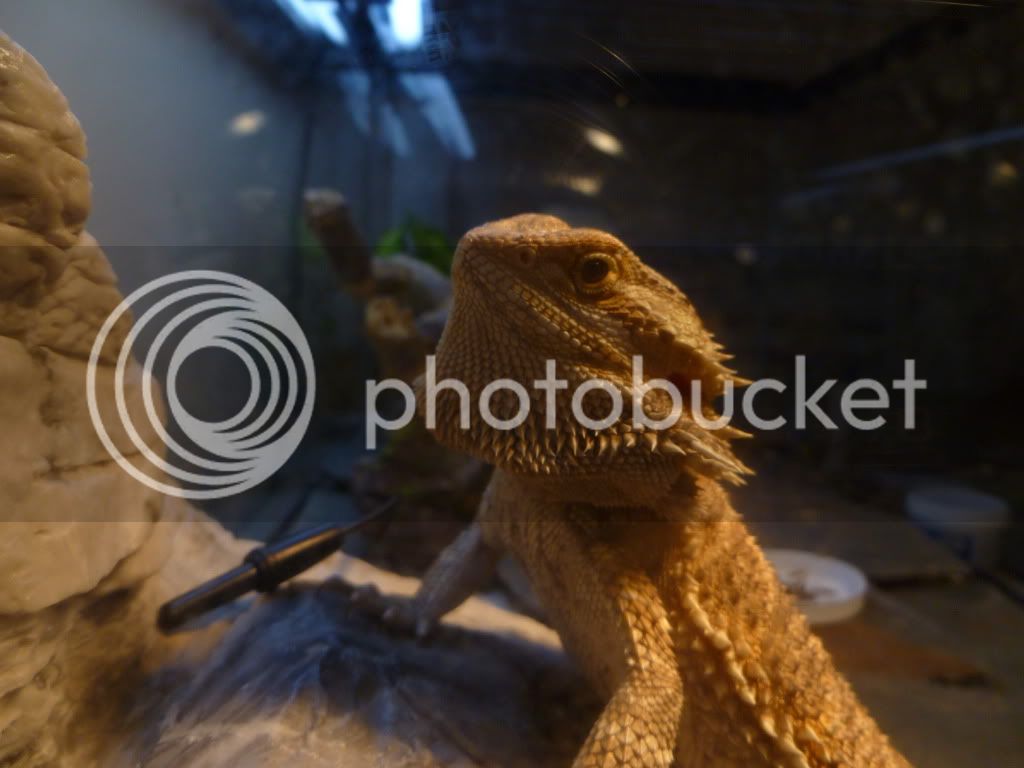 Him looking *really* grumpy sitting in the sun on the back of our recliner. And I put his tail like that, lol 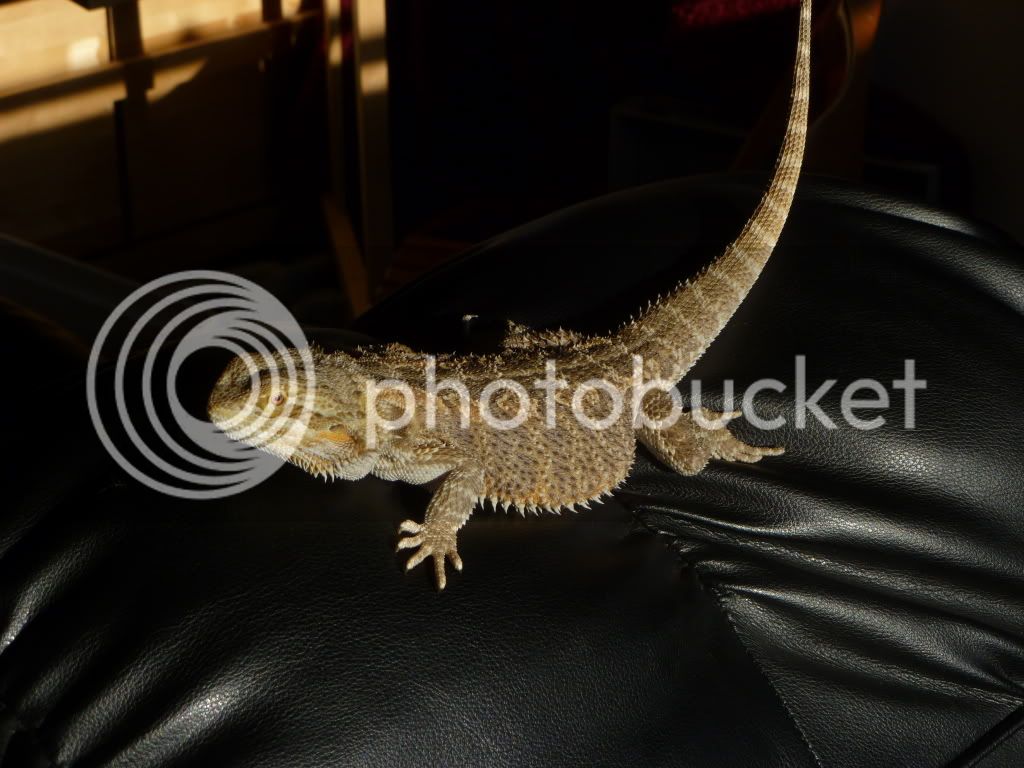 My husband took this :roll: 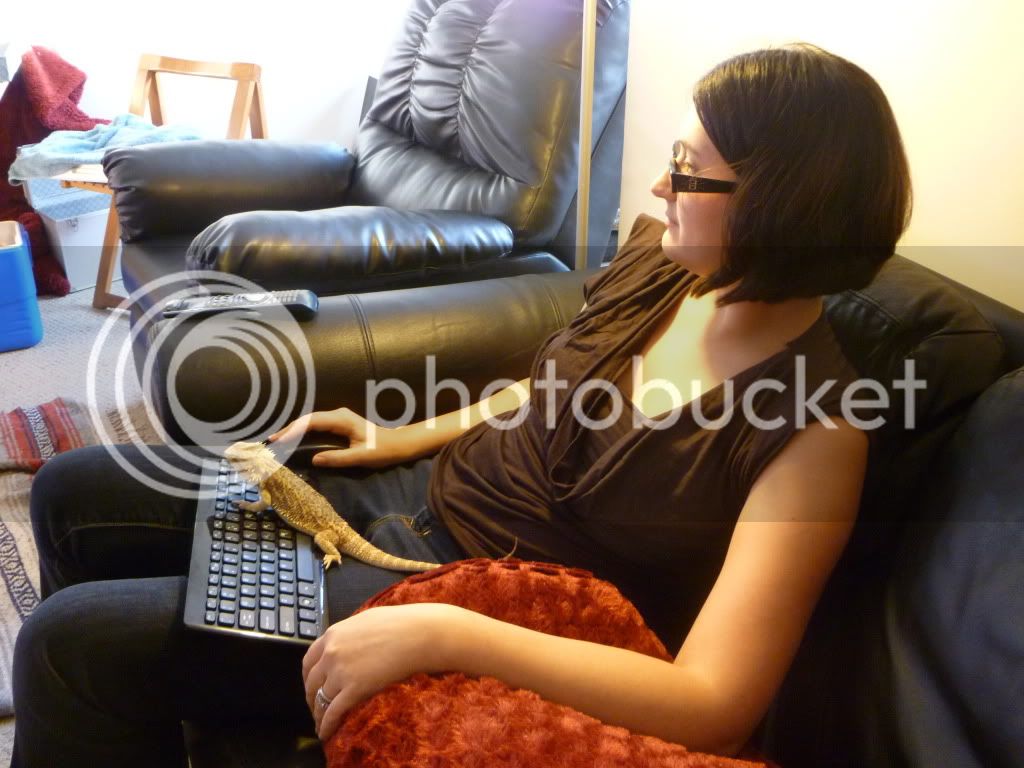 A rare shot of him actually eating his salad 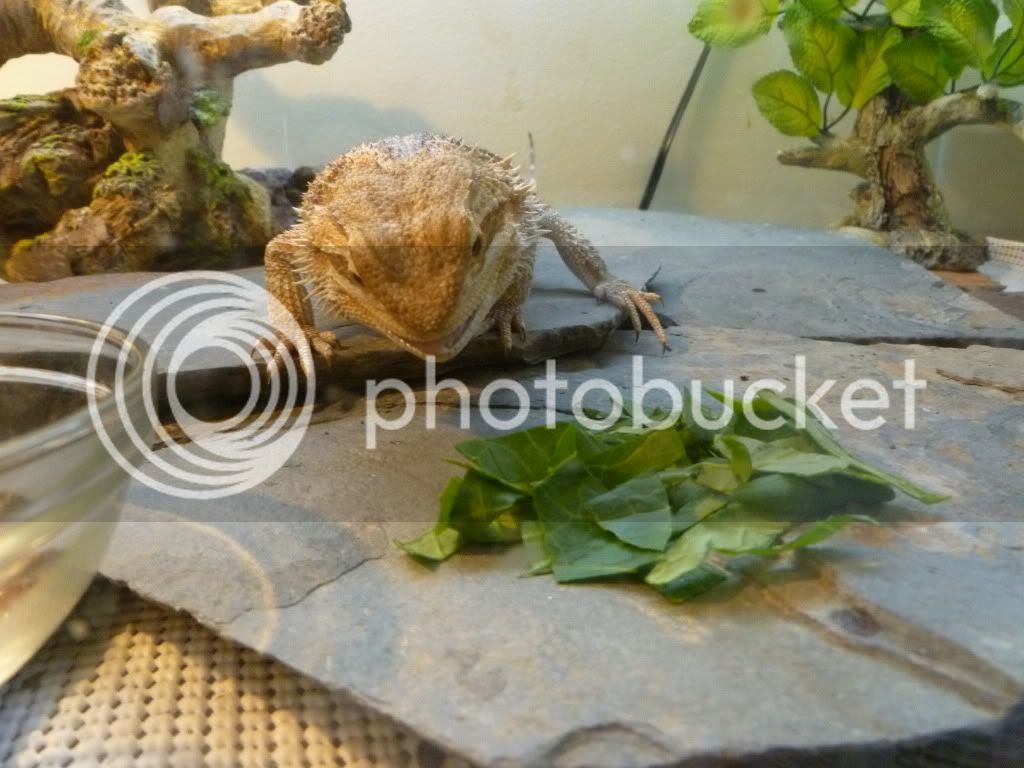 Watching Glee with me! 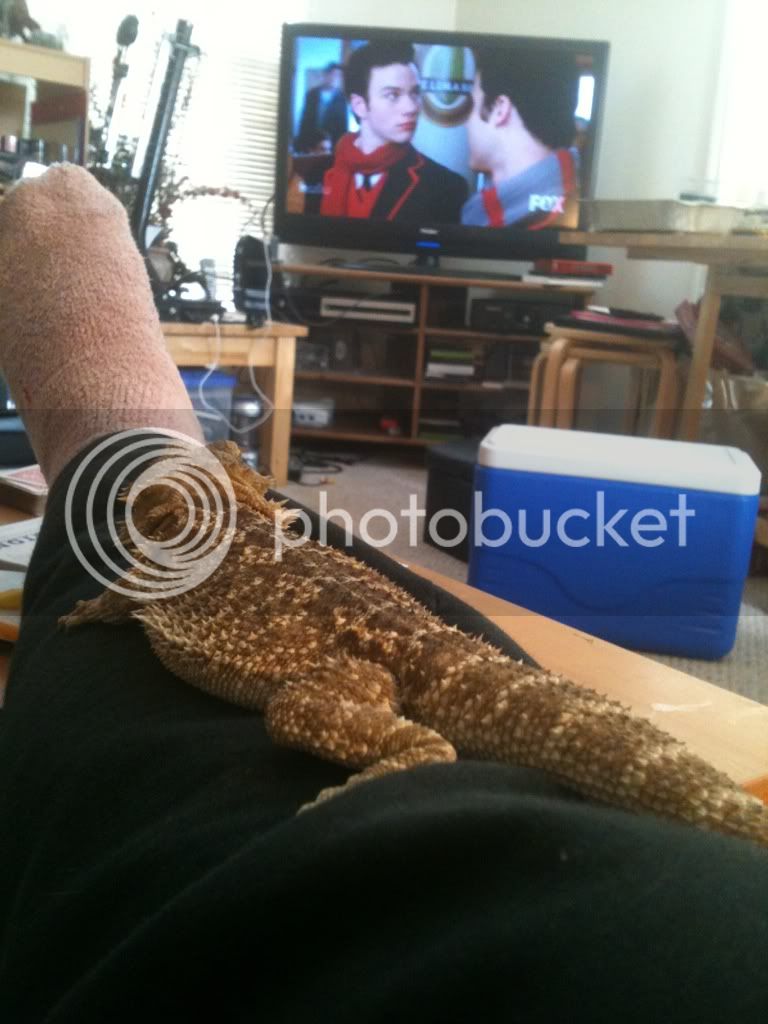 He loves to explore the coffee table, not sure why 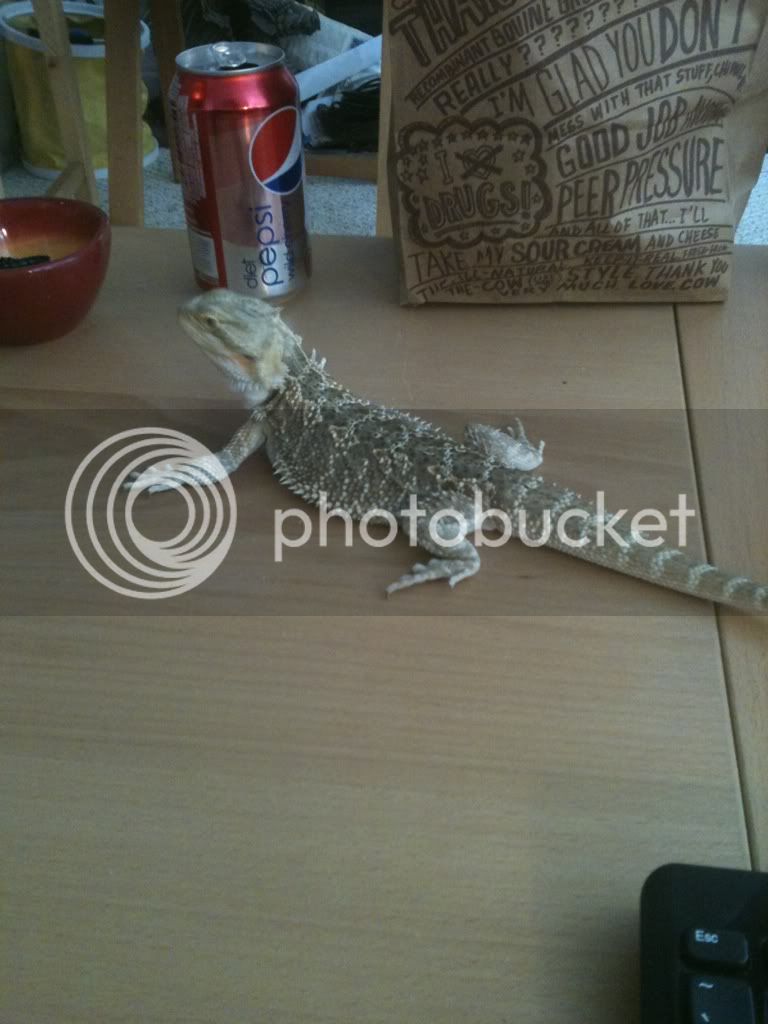 I did not put him like this, lol. I should have entered it in this months photo competition! 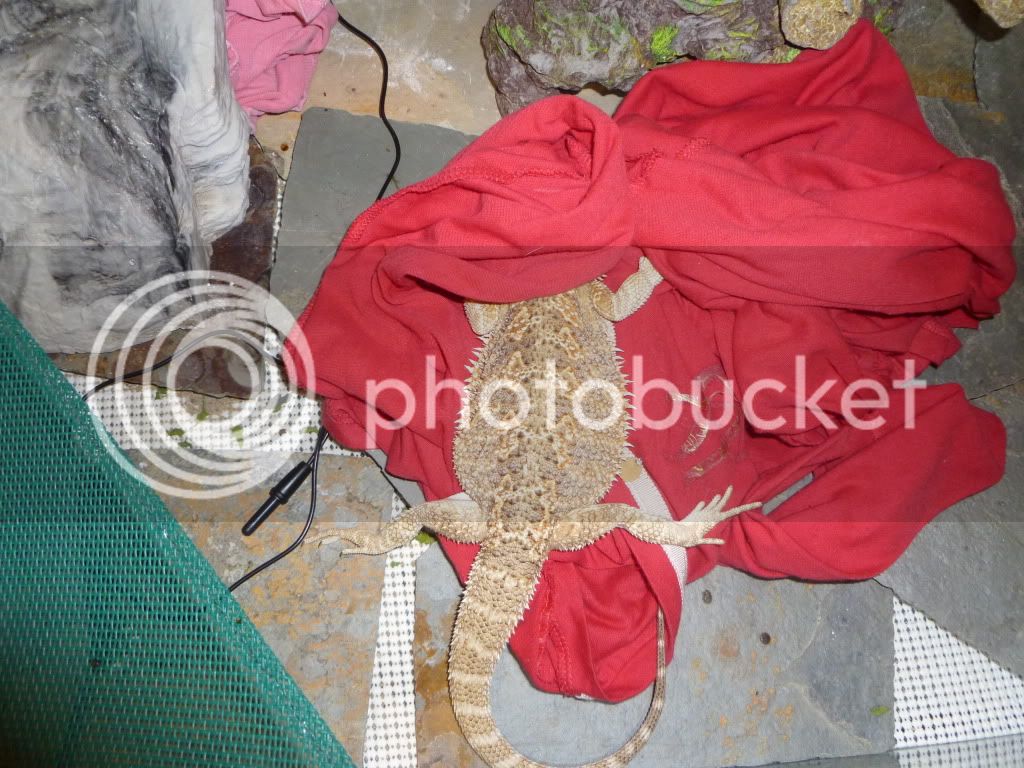 Him still being really mad from the vet's visit the night before. He looked so hilarious, all puffed up with the black beard. I started petting him and he deflated while managing to look confused. 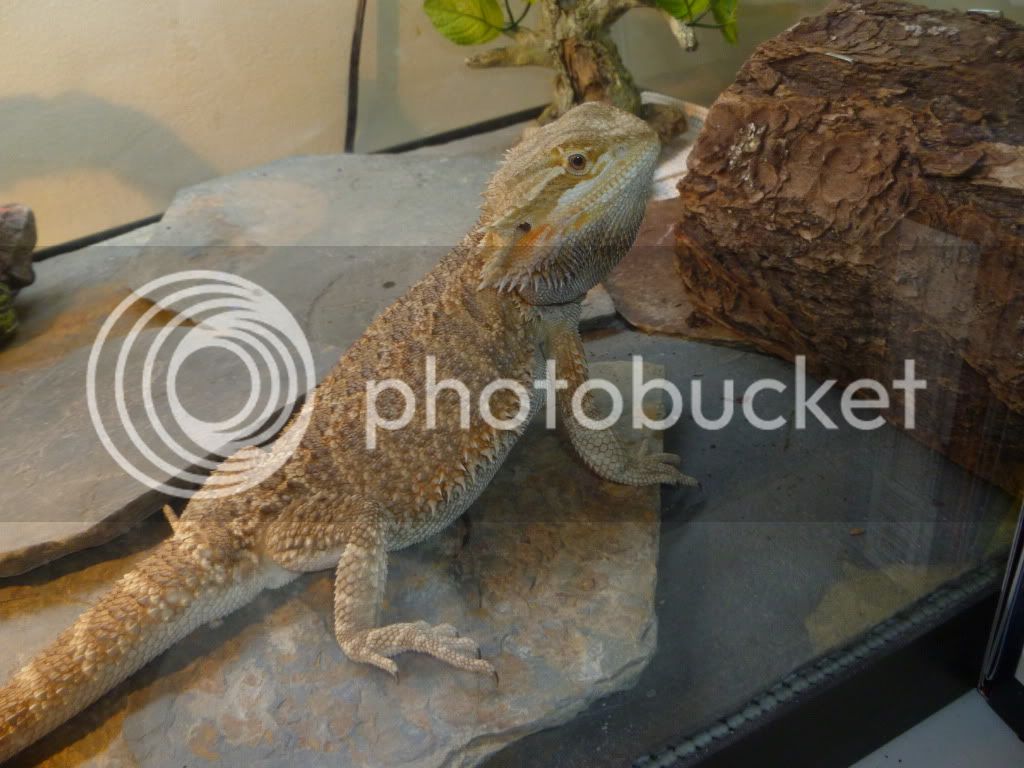 Just looking cute. This was right around when he stopped eating about a month ago. 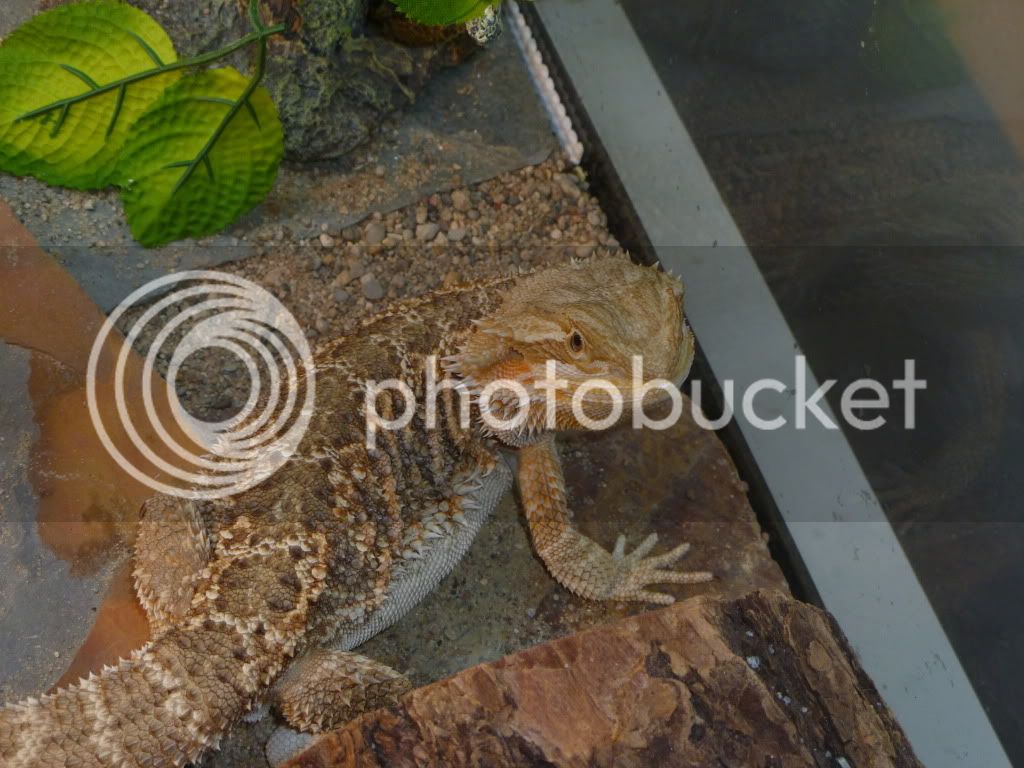 The pictures are beautiful!

Original Poster
Thanks you two!

Well here's the news after today's follow-up visit. First off, both Scully and Daedalus had clean fecals!

Scully has been walking better on her front but, not so well on her back. I took a video of her (luring her around with roaches) for the vet. She was pretty concerned about that back left leg, which has been swollen more or less since her first clutch back in May and has gotten worse and more ouchy since she lost her nail. When Scully walks now she drags her tail on the ground, the vet believes that's to compensate for the pain in that back leg.

So we went off the metronidazole, the daily oral I was giving her, and are now putting her on clindamycin every 12 hours. I think that's the same stuff that Daeds was on back when she was having hip issues. I got more of the ceftadizime for the every 3 day injection, and now also metacam for pain and imflammation every 2 days! My poor girl! The vet said to keep a close eye on the back leg as she thought it looked worse than when she was in 10 days ago, and if it gets more swollen at all I need to bring her in right away. She said realistically Scully should start showing improvement after her 2nd dose of the ceftadizime (Sunday), so she's going to follow-up on Tuesday. If there's no improvement, we'll probably keep trying for another 10 days, otherwise she strongly suggests tapping the bone to get a sample so we can find out what's really wrong. Ugh I'm so nervous for my her! And because it's an infection it's not something we can just leave like we did Daed's hip. I really hope the new meds and the metacam start helping her right away.

Anyway that's all I have for now. Wish my girl luck! I'll keep the updates coming as I get them.

Retired Moderator
Aww, poor Scully, I'm just glad she's not laid any eggs lately. Hope the meds work, wonder what could be wrong, you'd think an infection would be gone by the time the first round of meds were done. So all good wishes to her and you that it shows improvement by next week. Poor sweet Scully, she must be in a lot of pain if she's dragging her tail. Lots of healing hugs being sent to her from all of us.

Original Poster
I asked the vet that, about the first round of meds not working. She said some bacteria are resistant to that daily oral I was giving her, so hopefully switching to the clindamycin with more frequent dosage will help. She thinks it will at least. I'm going to have to make a sticky note and put it on her tank for her med schedule. At least the only one I have to measure out is the clindamycin, the others are pre-filled for me.

She really is beat, getting all those meds and poked by the vet wore her out! She was great for me at work though. I forgot I took a couple pics! And I'll show you the vid I took for the vet. 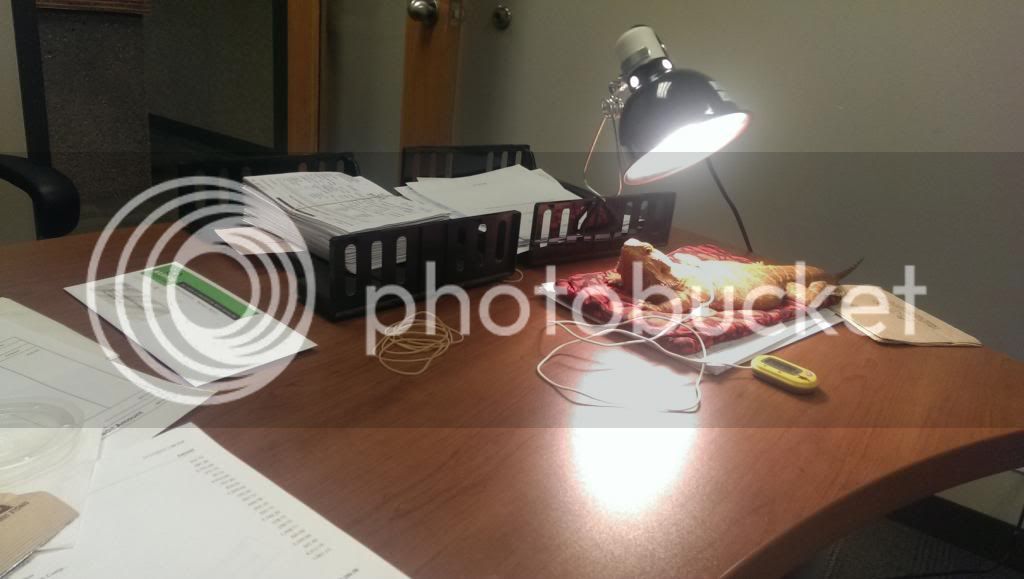 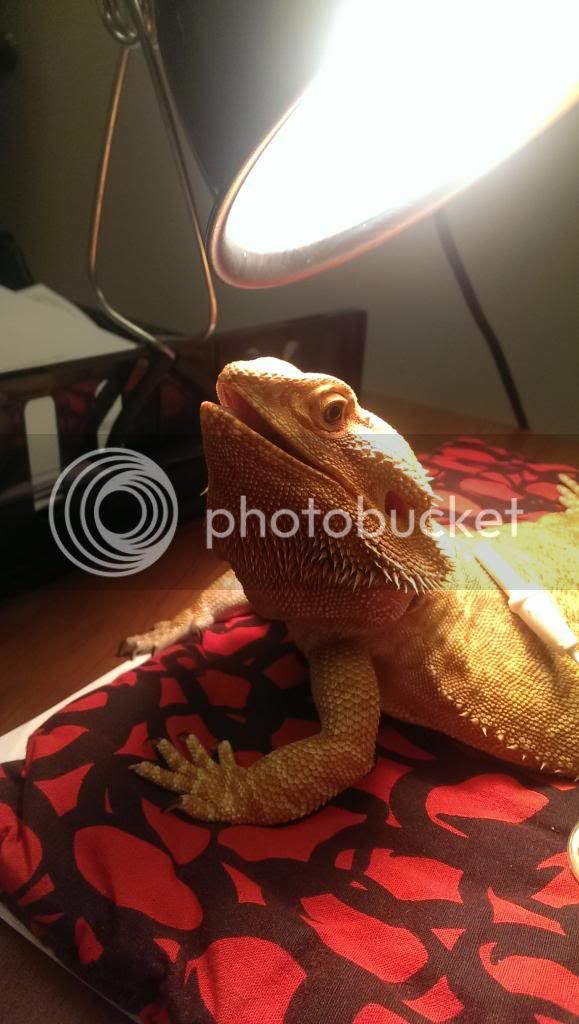 You can hear my hubby simulateously praising Scully while talking to our dog :roll: couldn't figure out how to mute it. You can see how gingerly she steps on that back leg though (it's the one close to the camera)

Staff member
Moderator
Oh, poor girl, you can tell using that back leg is painful. Hope & pray that the meds help and she starts showing improvements in her leg very soon.

Retired Moderator
Is the vet sure there's nothing wrong with her lower back, too? I'm only asking because Lonzo has a problem with his lower back and he drags his tail. Mind you, his leg isn't a problem, just his back. Poor Scully, but those roaches sure get her moving Hopefully the new meds will help her.

Original Poster
I'm not sure, I don't know if it was something with her back if that shows up on the x-rays. The front and back legs being swollen were pretty obvious on those. She can certainly lift her body off the ground no problem. If it does turn out to be a back problem though we probably won't know that until the issue with her leg clears up

And yea Scully will go the distance for the roaches, lol. Imagine if I had horn worms Lizards on diets don't get horn worms though!

Retired Moderator
Too bad, maybe when she loses some weight she can have a treat once in awhile. And I really am hoping that it is her leg and that it heals up and she's back to normal soon. Fingers crossed & toes, too.

Original Poster
Well Scully's back leg seemed to be doing just a teeny bit better since last week, however I came home today to find she has a hard but tender knob on her bad front leg, kind of right above the elbow on the "front" of her leg, like where her colored scales start to turn into the white under scales. She also can't walk at *all* on it, pretty much a complete flip from yesterday.

I'll be giving my vet a call tomorrow to see what she wants me to do. Hopefully she's in this Saturday so I can bring her down

Retired Moderator
Oh no, Scully is sure having a hard time, hopefully you can get her in to the vet on Saturday to find out what's going on. Give her a hug for me, I'll be waiting to hear.

Original Poster
I will. This is just so frustrating. That lump definitely wasn't there this morning. And of course this is the first time this week I decided she would be ok not to come to work with me!

I know the next step, the one the vet was hoping we could hold off on and not have to do, was tapping into the leg and getting a sample of whatever it is. That seems to be the likely thing to happen, argh!

Retired Moderator
I understand how frustrated you are, I'm going back to the vet with Titan as the YF is back in almost all the places it was before Titan shed, I'm very worried about him as I don't know what to do next to get rid of this stuff and not make him worse. So I can sure relate, even though it's not the same thing at all, it's still understandable how frustrated and worried you are. Hopefully it's a fixable thing and she heals well. Fingers crossed for both our babies!

Original Poster
We got into the vet today, and the news isn't so good. Scully's front leg is much worse. The vet was hoping the lump was due to a fracture that maybe she did to herself the day she stayed at home, which would attribute to the increased swelling as well. We did an x-ray, and unfortunately no fracture, the joint in her elbow is looking much worse, a lot of empty space between them Why the infection is getting worse in this arm is a mystery, because her back leg is actually starting to look better, both by sight and confirmed with the x-ray. She is also down a whopping 30 grams from hardly a week and a half ago - I'm guessing the clindamycin is the cause of the decreased appetite. The vet gave me the OK to let her eat more bugs (one of the few foods she'll willingly eat) so that her weight doesn't keep dropping.

So her recommendation was to keep the antibiotics the same, we're obviously on the right track given that her back leg is getting better. I got refills of the metacam and also another pain killer that I can give her every 8 hours if needed. That should hopefully help her front leg.

Per the vet, if we can't stop the infection in the front leg it's going to have to be amputated before it spreads further and even IF the infection clears up entirely, she said that front leg will most likely always be very stiff and possibly arthritic.

Anyway, that's the awful news of the day. I've been teary eyed since I heard her say "amputate". My poor girl didn't deserve this, she's so young . She's on strict cage rest and I need to line her tank with some towels so she can't hurt herself. Keep her as warm as possible at all times. Be super careful when handling so as not to jar that leg.

Ugh, this is just a nightmare!

Retired Moderator
awww, I'm so sorry to hear about Scully, and I sure hated to hear that work amputate, too, so hopefully that leg gets better. Isn't it strange that the infection is worse in the front than the back. Did the vet say it was possible to spay her in the future so she couldn't lay any more eggs? That would just make it all worse. My heart goes out to you & Scully and I'm so hoping she gets better soon.

Titan still has YF but it's less since the shed. So same meds to see if we can't get rid of it thoroughly. So far it's in the skin, not internal, so hopefully it stays that way, as if it gets into his organs, that's when it gets serious.

I was waiting to hear from the vet, we got a blood panel done on Leo to see if he's having kidney/liver problems, his eye sockets are very pronounced, but didn't hear from her today, will call her tomorrow to see.

So give Scully a big hug and I'll be praying that she recovers, poor sweetie.

I'm so sorry to hear about Scully. This is so not fair to her. Lot of love and I hope everything works out for the best!

T
Toerag mk2
I see my lizard is being given Allopurinol 100ml tablet 10mg/ml (0.4) and tramadol 0.2ml every other day to help with gout. I have tramadol at home can I water it down and give it to her and if so do anyone know how much to water down ?
Wednesday at 12:15 PM •••