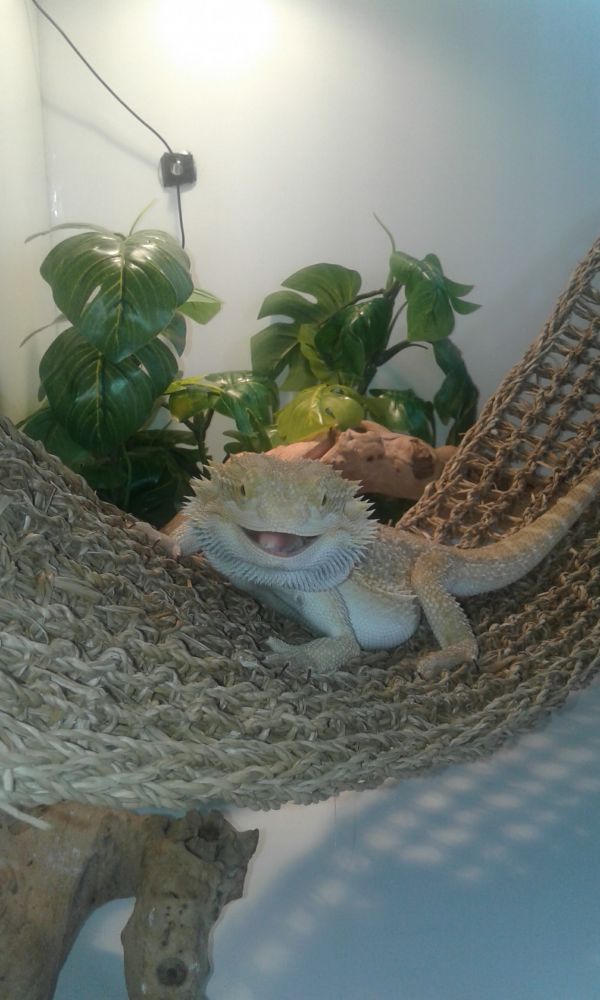 Hello friends, whom i don't know, but who have been so generously and patiently helpful since my wife and I began this heartfelt journey of learning to love our scaly children the absolute best we can. This is RJ, our second precious beardie. Our first was Rex. She was a precious, gentle, and easy going creature. It pains me to say, that for a time, after we first got Rex, she was without a few things I now know are crucial for a young beardie. I could say the fault lies with the petco employee who told me they really only need heat and bugs. But I won't. I should have done research before getting her. But i didn't. Instead, i learned all the things I was doing wrong as I went along. In the end, after many vet visits, tests and tears, we had to put her down just over 2 yrs old, without knowing the cause of her illness. Though we tried to give her the best life possible, the guilt will always remain. The experience of waking into the vet to put her down, and walking out a week later with a box, was the most painstaking time of my life that I never expected. To feel such a deep sense of loss for a "pet lizard" is something that I never would have expected! I told myself I would never get another beardie. Never again did I want to ensure the loss. The days that followed bringing Rex home in a box were tough. Waking up expecting to feed her, walking by where her tank was and not seeing it. Weeks past. Missing Rex got easier, as I tried to enjoy happy memories of her via recorded videos and photos.
After a couple months had past, a reptile expo came to a nearby city. After consideration, I decided i would go to the expo, after making that decision, my subconscious decided I was going to get another baby beardie.
*Flash forward*
RJ was about 3 months when I drove from New Hampshire to Connecticut to get him from the breeder that brought him to the expo. I didn't bring him home the day of the expo as I told myself I would leave no doubt I had everything he needed, and that I would be certain whatever facts I had acquired while i had Rex, were correct. I'm not entirely sure what it is that takes place when a person brings a beardie into their home, but it seems a special love develops. Almost effortlessly and unexpectedly. RJ is almost 8 months now, and as far as I can tell, very healthy in all regards. Currently we are camping. Last night, after snuggling with him for a while, we laid him down in our bed in the camper. Typically when we do this at home, we transfer him to his enclosure approximately an hour later. However, knowing that he had perfect "night time temps and humidity" right where he was, time sort of got away from my wife and I as we sat outside the camper enjoying the night. It was almost a whopping 4 hours later that I went back inside the camper to transfer him to his enclosure. As I picked him up to put him in his bed, something occurred to me. Given the way that these creatures hold onto the behaviors engrained in them as naturally wild animals, how is it that when I pick him up in the middle of the night, when he's dead sleep, he doesn't budge an inch? He doesn't peek an eye open? In the wild are they not instantly alert if something were to sneak up on them at night? How could he possibly know I'm not a threat? Without looking, moving, or hearing my voice? Just as all these thoughts are going through my mind, I set his bed into his enclosure, with him in it, and... he wiggles his but, stuffs his head closer to his blanket, and in that moment I know. No facts, no opinions, no scientifical research, nothing could tell me otherwise. RJ knew daddy was putting him to bed! RJ knows who his mommy and daddy are, he loves them and trusts them completely! In addition, I know Rex, in her final days, knew i did everything i could for her. I know she sensed my pain as I looked at her for what seemed like forever before she went to sleep. Rex, RJ, the name of the beardie who belongs to the person reading this. We bring these precious creatures into our homes, and they leave an unforgettable imprint on our lives.
Click to expand...

Staff member
Moderator
You did your best with Rex and the important thing is that she was loved and you have learned from her life and used your knowledge to make the lives of other dragons better. I certainly understand the bond that is formed and how hard it is to lose a dragon though. I'm glad you are able to give RJ such a happy home. He is a lucky guy who will have a good life. How does he like camping so far?

Beats me on the deep sleep. Some of them sleep more soundly than others but most of my guys have been completely zonked after a while and I can move them around a bit. I think part of it may come down to them feeling safe and comfortable and part of it may be that they burrow at night so they may not have encountered a lot of danger while sleeping. That's just a guess though.

Original Poster
Given that it's a complete environment change, is day he does pretty well camping. He still ate, spent very little time in his cave, unlike last time (his first time camping) . He enjoyed going outside the camper and hanging out. Even brought his leash and he walked around a bit. And we're home now and he's still eating. Also, I tried five days with no bugs (in an effort to get him eating roaches again) with no luck. The ONLY bug he'll eat now it's super worms. Ive not tried silk worms yet, have to order eggs, then wait for them to hatch. So what choice do I have? He won't even eat calcium worms. After all, I heard the issue with supers is that until they're an adult, there is a kink in intestines which makes digestion of the exoskeleton sometimes difficult. Well given his size, I imagine his intestines are probably that of an adult at this point? I also heard the exoskeleton is no harder than a roach leg. In addition someone once told me that if they were in the wild, they would eat what they find. Which makes sense. Plus he's been eating a good amount of veggies, so those have to help. The gist of it, I've been giving him a few super worms the past couple days. I don't know what else to do, I don't want to give him nothing. I'm also thinking the couple times he went a bit without pooping, could have been from slowing down his food intake. I don't know, an I stupid for giving them to him?

Staff member
Moderator
He can probably handle the supers. I'd only give them a few at a time and once in a while though because they aren't very healthy in large quantities. If he's eating veges that's good. Give him plenty of those and he'll be fine.

D
Lost and Found a tale of 3 dragons

C
Asking for a friend