Back story:
So I recently rescued my old bearded dragon (8yr old) from my parents house. He was with them for 2 years after I had moved out for college, but on my last trip home, I realized that he had a eye issue, and took him to a vet (who doesn't specialize in lizards and rarely sees them). I was informed that he had a ruptured cornea, and brought him back to my new home with me. I now have a vet appt. set up with a exotic animals vet next Wednesday.

Details:
So, now with having grown up myself, I've realized that the food he was given was not appropriate, I think, I'm not sure. All Buffy has ever eaten in his life has been "Rep-Cal Adult Bearded Dragon Food- Maintenance Formula" some crickets and mealworms. When he was younger, he would also get some lettuce, strawberries and blueberries. Now, with me becoming an adult, I can recognize that it wasn't the best for him and I'm working to improve his diet, but i'm not sure how....

Currently:
I'm transitioning him using the juvenile version of that food (couldn't find the adult one) and dandelion leaves, arugula and romaine lettuce, some blueberries and strawberries, or at least trying to. I've also been feeding him one or two mealworms a day .Additionally, I'm trying to get ahold of some prickly pear cactus for him as well.


Does anyone have any recommendations on what else I should add to his diet?
F

Buffy has fared pretty well as far as body structure , although just a bit chunky. Still, there could be hidden health problems but nothing just from outward appearance. Try greens like collards, turnip, mustard, kale but not spinach or swiss chard which are high in oxalates and can prevent calcium from being absorbed.

Is Buffy lethargic ? Sleeping a lot or active ? Do you take her out for supervised exercise ? If you do so indoors, always check diligently for stuff laying on the floor because dragons WILL swallow rubber bands, coins, string, plastic toys, etc.
F

For the past few days I’ve been taking Buffy outside for walks on my shoulder and back going grocery shopping for the greens for him as well as spending a few hours just in our yard and on the porch daily. VERY active when on me, trying to climb up higher, trying to jump to people near by, and when my partner and I cuddle with Buffy while reading inside, he loves climbing up the furniture or nuzzling my partners hand. (Walking over and then plopping his body on my partners hand and leaving it there.

When I had first taken him outside, I didn’t have a leash and he was pretty active. But with the leash on and on the ground he’s a bit more subdued.

When he goes back in his cage he is pretty chill and relaxed, and probably worn out from being outside and mostly sleeps.
A

That sounds good . It's really great that he gets out in natural sun and the leash is a must for shoulder surfing. There are numerous sad threads here where a beardie leaped from a shoulder and was injured pretty badly. No need for such an accident to happen but people think it never will .
F

I never let him shoulder surf until I had a leash. And when we go out, I wear overalls and attach the leash up high, so less distance to fall, more freedom of movement on my shoulders and easier for me to grab him when he lunges off, which has happened twice now in as many days 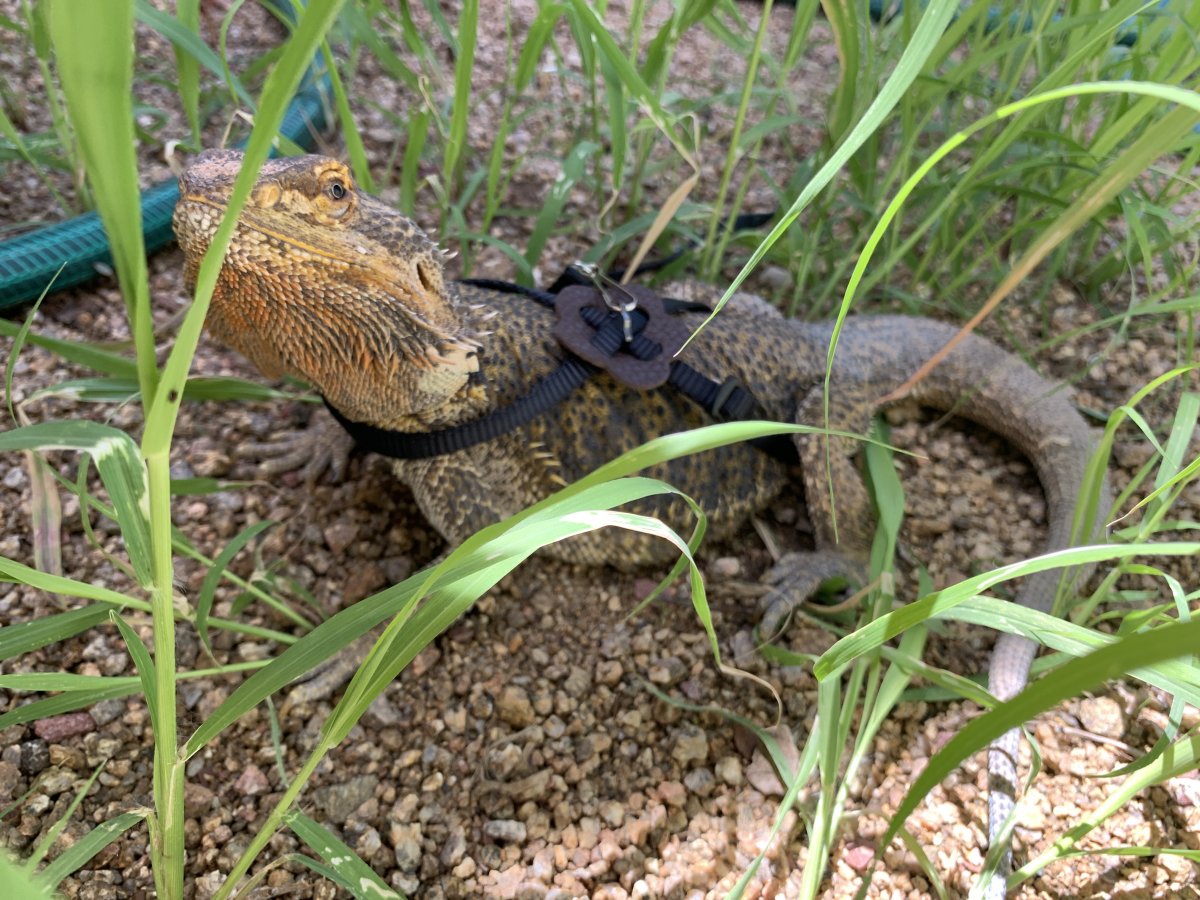 Any tips for transitioning from food 24/7 to being fed once a day?
K

Fionnuala said:
Any tips for transitioning from food 24/7 to being fed once a day?
Click to expand...

Fionnuala said:
Any tips for transitioning from food 24/7 to being fed once a day?
Click to expand...

we do pretty much what karrieree said. salad given in the morning, in the evening what is left gets fed to the roaches for gut loading.
A

T
Toerag mk2
I see my lizard is being given Allopurinol 100ml tablet 10mg/ml (0.4) and tramadol 0.2ml every other day to help with gout. I have tramadol at home can I water it down and give it to her and if so do anyone know how much to water down ?
Wednesday at 12:15 PM •••