He looked much better in that picture. The UVB lighting is so crucial for their overall health
so he will hopefully rapidly improve now for you. I'm sure he is feeling better already.
Do be sure he does get adequate calcium. It is a delicate balance so as suggested, just
keep an eye on his urates to be sure they aren't too hard.
Keep us posted on him.

Original Poster
Thank you to the both of you,

He basked on his rock for ~20 minutes this morning and eventually hopped up to his branch, then crawled up to his spot at the top. I'm guessing he knows what temperatures he needs to regulate everything correctly, right? Now I'm getting worried because the rock's temperature varies between 105 and 112 degrees, but at the top of the stick I get readings of about ~91 degrees. He looks happy?

I'm going out to get new baby crickets and when I get back I'm going to hand feed him some of his slush with a little extra calcium powder, and mist him and let him drink. After that I'm not sure whether I want to try hand feeding him crickets or let him hunt them for a bit; I just don't want to stress him out more than I have to between all the moving and handling. 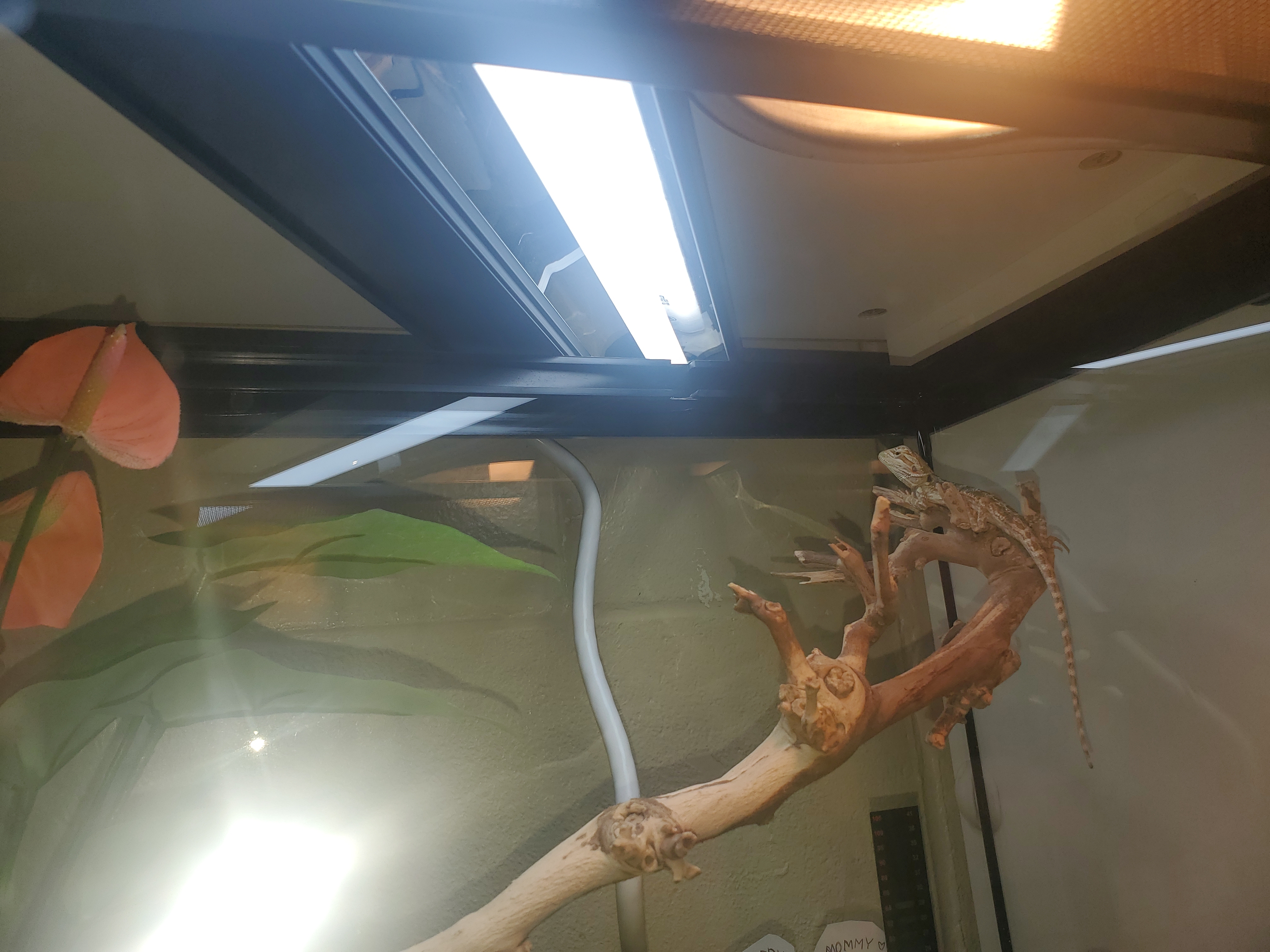 See if he will go after the crickets him self --- and see if they have dubia roaches -- those are a better staple -- if not you can order on line http://www.dubiaroaches.com -- the top of stick is in the shade -- and yes 105-112 is too hot on that rock -- are you placing the probe on it? If so I would get a lower wattage bulb and see what you get for temps on the rock

Original Poster
Still can't get dubia roaches in Florida and I'm waiting on some BSFL to come in unfortunately, but I'm feeling optimistic. I'm just afraid of these guys scampering off and hiding in the tank overnight.

I'll shift the uvb light so it covers his stick? I didn't figure he'd avoid it at all
K

Thats right did you check out discoid roaches?

Original Poster
I did, we've found a few local places to order from. Hopefully between those and BSFL he'll find something he really likes.

He's always been a lax lizard but I'm worried about when he runs onto my arm, lays flat and closes both of his eyes? He can stay like that for a while; he just did it after seemingly getting fed up of the mist hitting him on the table. He's definitely able to be agile when he wants to and I've caught him running around on all fours with his tail up, but he's still not eating crickets. I released a few in his tank and just left the room to give him some space.
K

Original Poster
Yesterday I couldn't account for two crickets after I left the room for ~20 minutes, and he was on the floor instead of his rock where I'd left him so hopefully he got them in (I'll watch for a stool in the next few days). Just in case, I left some greens in the corner that they'd hopefully nibble on instead of him? They were very small crickets.

I'm definitely syringe feeding him today; I'm worried ~10 droplets of water and a couple minutes of misting just isn't enough to hydrate him and I don't want to wait until he can't lift his head up to get food in there. Do you have any personal tips on how to gently force him? I've watched videos of people holding them in one hand and sliding the syringe into the side of their mouth, depositing a little at a time and tickling the neck. Any pressure points to watch out for? Steps to take if he starts coughing?
K

If he aspirates hold him at a angle downward so the water drains but if you go slow enough he shouldnt- and the video sounds like a good one- is he active - basking?

Original Poster
Yes he is, he was looking lazy when we got home on his rock directly under the UVB. We gave him a ~10 minute bath in warmed up bottled water mixed with Pedialyte (1 part Pedialyte to 2 parts Water) and he lapped some of it up; at this point, he actually looked a little dehydrated (his skin didn't really tent when pinched but he had slight wrinkles?)

After his bath we put him back on the rock to heat up more while we prepared his slushie - he still completely refused to eat a live cricket presented to him, and he was really reluctant to take any liquid... until I took some Pedialyte(diluted with water, same proportions as the bath) and mixed it with pureed sweet potato baby food - the ingredients ONLY listed sweet potato - and he went nuts licking it up! He lapped at the syringe for a good, straight minute. His skin looked a lot more supple after this; I'm afraid he really was getting dehydrated up until now because after he got some of that in his system he was crawling around my body much like his older self.

So as far as I can tell, he's still not going for his live crickets. I might be able to entice him to eat more tomorrow with sweet potato tricks, I know it's not a good idea to have him on this all of the time but I think it will keep him going until his appointment on Tuesday? And maybe having a lot more water in his system will help.

This led me to putting together a concentrated blend of crickets, sweet potato, and more Pedialyte in the syringe and trying to feed him some more .I think we lost some momentum in the time it took to make it, since he only lapped up a couple drops of that. He spent the last half hour before bed looking a lot more lively, basking with his forearms extended in that 'swan' pose I mentioned a while ago. I let out a couple crickets in his tank and left him alone again, and came back to him standing on the ground with one of the crickets missing... I'd crippled both of them before putting them in and left a new leaf before putting him to bed, just in case it's hiding in there somewhere.
K

Original Poster
Hey guys, sorry for the lack of posting, been very busy with him and work.

We have discoid roaches and BSFL coming tomorrow. Unfortunately it took a while for everything to come because of stock and shipping complications, but I’m very excited to start offering him new staples— I have a feeling he just doesn’t like crickets. On that note, he is still refusing crickets and his salads.

We took him in to the vet yesterday and I’m very grateful the animal hospital near us has a very kind and professional reptile doctor. He was super helpful and we are waiting on results for a fecal test. We were given a powdered food supplement and a calcium supplement that we mix with water to feed him by syringe, which he has been such a good boy about! He laps it all up very easy. Same with water. The vet told us nothing seems off about him so he’s just hoping it’s a problem with his stomach we can resolve easily with some medicine. Ever since starting him on his food supplement he’s been a lot more lively. He moves around his tank a lot more and jumps around when we’re handling him, so I’m grateful.

The vet also recommended taking him outside to try offering insects. I was worried taking him outside for too long in the Florida humidity could be harmful but the vet reassured me it’s alright so I’m very excited to try that tomorrow. I was told the real sun can be a much better stimulant to appetite than the UVBs. If he seems to like it I’ll be taking him outside a lot more often.

The milligram scale also came so we are keeping track of his weight now. He has only been gaining lately.

Thank you all again for your help! I’ll post another update tomorrow after we try feeding him outside.

Unfortunately he doesn’t seem to care for dubia roaches. I’m going to keep offering them, but i’m feeling a bit pessimistic about it. He did scarf down a couple hornworms— they’re obviously not what I wanted him to like the most but i’m excited he got some solid(ish) food in him at least, and “hunted” them. He’s still accepting his supplements just fine and seems in very good health. Stool has been a little watery for the last couple days but I suspect it’s just due to the change in diet and the watery food itself. Should receive results for the fecal by Monday at the latest.

I’m concerned about his shedding though. It’s been almost a month since his last shed. When he’s alone in his tank, I’ve noticed a lot more often than before his skin gets very dark in color and the ovals on his belly darken as well. At first I thought it was a symptom of shedding, perhaps he was feeling stressed out and disturbed because it was uncomfortable? But when I take him out to feed and handle, he lightens up completely— back to his normal colors. He’s been looking dark for the last couple days and it’s worrying me a bit. Please let me know if that seems to be any cause of concern.

That can be frustrating when they are picky with their eating!
Maybe he will decide that he likes the dubias eventually, it's hard to know for sure. Keep
offering them & you never know! At least he did eat a couple of hornworms, they are very
nutritious.
Shedding does cause stress as well as a decrease in appetite, too. Maybe he feels that he
isn't getting enough attention? They can pout & turn themselves darker than normal. Is he
warm enough right now?
It sounds like he is comfortable with being out of his tank & being handled. He isn't dark all
of the time then just part of the time? It could also be just him trying to regulate his body
temperature by darkening some.
You could try some bee pollen to help with appetite.

Let us know how he is doing.

Original Poster
We’ve been keeping a close monitor on his temperatures and they’re still good, maybe even a bit high if anything. I would be surprised if he wants more attention honestly! I’m always worried we handle him too much. We’ve been taking him out, stoking him, or letting him roam 3 times a day on average.

He seems to have decided he doesn’t even like hornworms today, lol. He’s so difficult. Still lapping up his supplements when we hold the syringe to his mouth, though.

It seems like around 80% of the time lately he’s pretty dark in color when he’s alone in his tank. He always lightens up after we take him out for a couple minutes.