Original Poster
Yes, I was considering that too. I’ll start doing research on how to do that safely but the idea really makes me sad, I don’t want to make him uncomfortable. Do you have any specific sources you recommend for learning that?
K

Original Poster
We just made a smoothie for him out of some mustard greens, a pinch of calcium powder, and two grapes; they were mixed with a quarter of a bottle of water(125 ml) - of course we're not going to feed him all of that at once, but do you think that's too watered down for him to get adequate nutrition from 10-20 droplets dabbed on his nose across? He's lapped up about 4 drops so far.

So far, when he does want to move, it doesn't seem to be with any issue - he can still skitter around with all four legs lifted like he always has. But as I'm writing this he's prone in the middle of the tank with his head lifted up, but he used to bask at the top of his branch more than he is now and he's spending more time behind his rock cave.

When we installed the new UVB light across the back, we also moved his tank to the opposite side of our room; could something as small as that spawn some sort of relocation stress? In the three weeks since we got him he's spent a lot of time exploring the area. Adding a pic of his enclosure and a close-up of the little guy... that big white block in the back is a dehumidifier, and we don't ever cite the temperature stick on his tank wall. 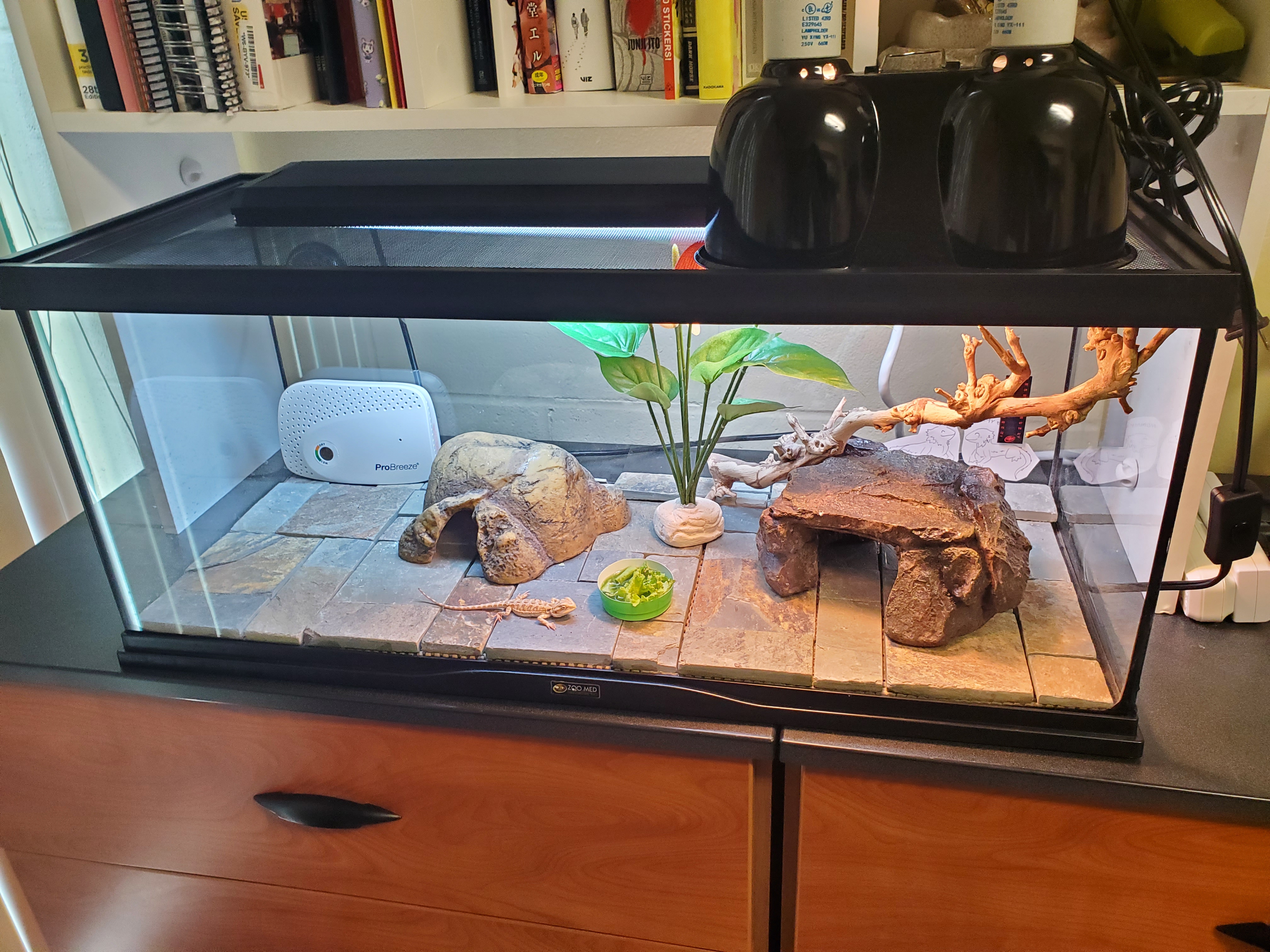 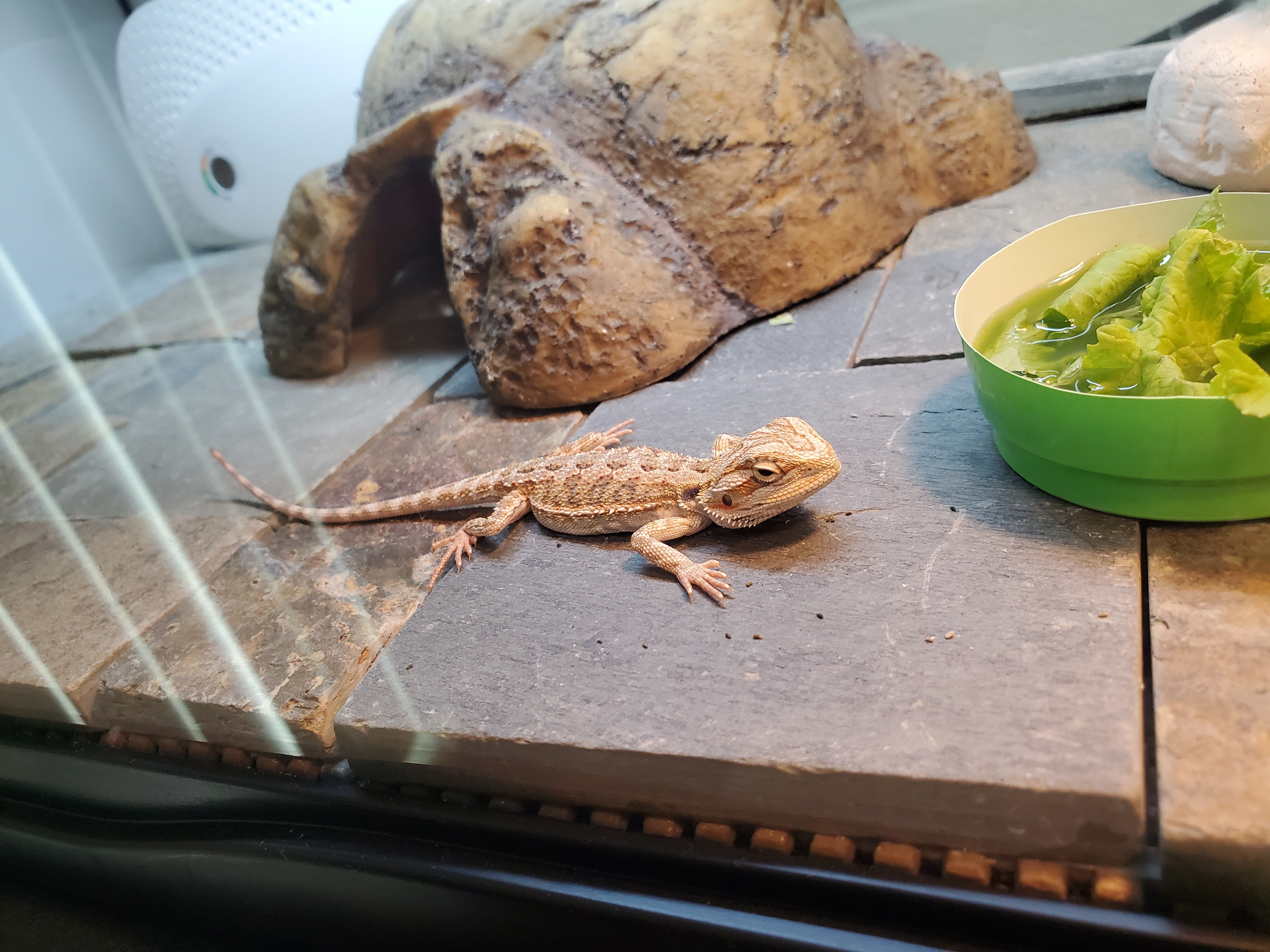 Link to the album in case those don't resolve:
https://imgur.com/a/LJNluht

Original Poster
Oh he just propped himself up on his legs a few minutes after I posted last, he's doing that The Swan position bearded dragons seem to like doing. Is that at least a decent sign of alertness?

I'm really worried about figuring out whether to handle him *more* or handle him *less*. He's traditionally seemed more stressed in his cage than when we're holding him, but maybe we misread him. His English is terrible.
K

What is the humidity in the tank?? Please get a digital probe hygrometer -- you want humiidty 20-50% nothing under 20 and over 70% https://www.amazon.com/Exo-Terra-Digital-Hygrometer-Probe/dp/B00101KWYW when you get this place the probe on the back center wall of the tank it will read the whole tank
Also your using the 5.0 bulb? If so it needs to be unobstructed---- take the screen off or half way on place the UVB width wise across the tank and get a piece of basking decor directly underneath 6-8 inches ----

Original Poster
We have an analog humidity reader and when we first got him, it ranged from 40-50% and sometimes climbed past that at night. We'd seen a lot of posts claiming 35-40% was the 'sweet spot' and it took keeping that electric dehumidifier inside + removing his water dish to get it down. Now, it goes down as low as 35 when his lights are on in the day, and then up to just-below 50% at night. We're on the Florida coast. We'll get a digital probe as soon as we can.

And we are using the 5.0 bulb, I can move the screen halfway off and place it.. diagonally to try and cover as much basking area as possible? When you say width-wise, I would assume you mean perpendicular to the desk but that would result in several inches of the bulb being obstructed by glass as the tank is about 12" in width. I can move the stick to give the rock complete coverage.
K 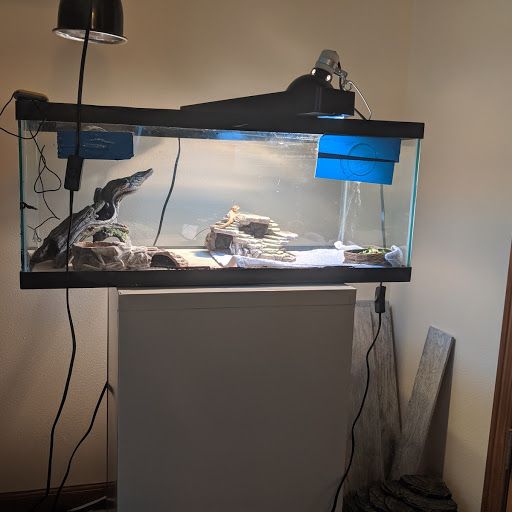 Original Poster
Working with what we've got here.. how's this? 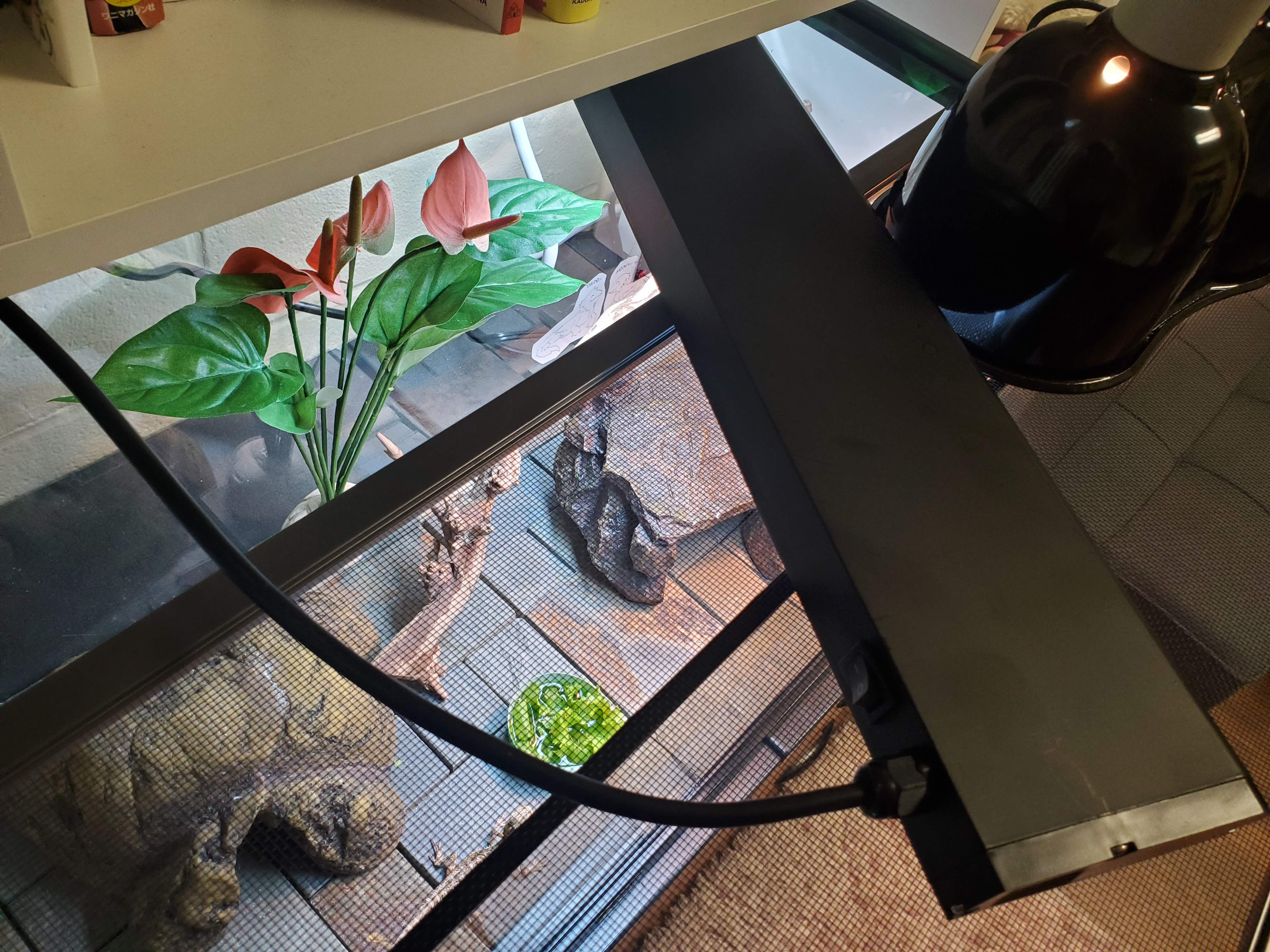 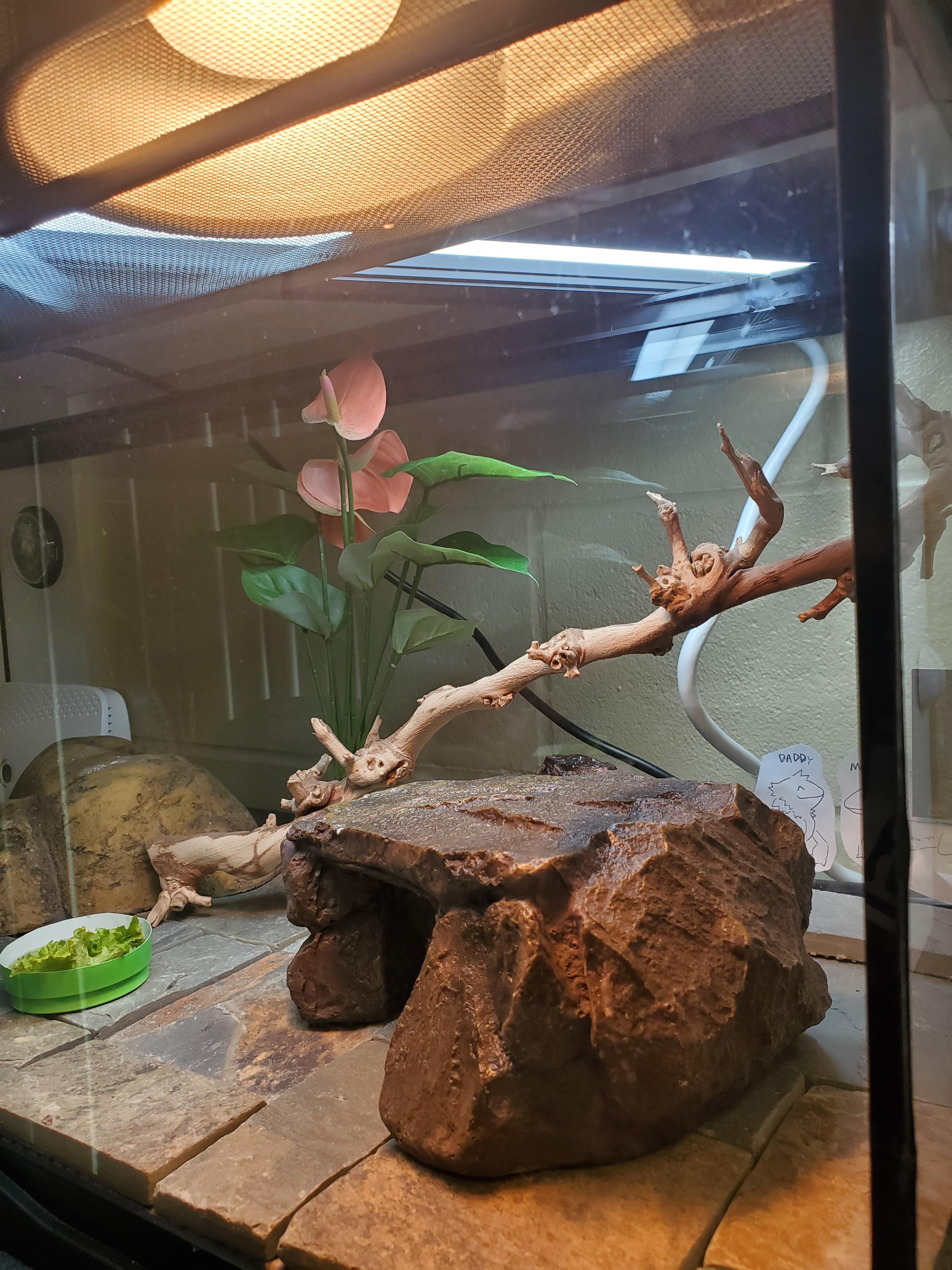 We'll check the temps on the rock in a few minutes, but the branch has been moved so it's getting UVB beamed directly onto it. Should we move him over there ourselves or let him walk over to it? His spots darkened a bit when we rearranged his ceiling just now.

Original Poster
He just scuttled over to his rock and he's hanging vertically off of the rockface, with his head peeking over the top - could the inadequate lighting have given him such an immediate effect? I'm more aware of the long-term consequences of poor UVB exposure, like MBD.
K

Correct UVB is pretty fast acting w/ the behavior -- I would look at getting a different wood piece if you like wood its going to be too skinny when he gets older -- as a baby its fine but as he grows its not going to be adequate for him -- he will outgrow it -- the UVB needs to be unobstructed -- that screen is going to block 30 % of the rays and the 5.0 is not strong enough --- you want it width wise all the way across the tank like I showed you in my pic -- either have the screen half way on and place the UVB on the end of the tank w/ the basking bulb on the screen by it or take it off and clamp the basking bulb on the end of the tank w/ the UVB sitting in front of it width wise

Original Poster
Thanks Karrie, for now I jutted the top out a little more - just enough to balance the heat lamp - and he's under direct UVB rays now. I took him out and over the course of half an hour fed him ~10 droplets of that slushie we made earlier, and a few extra droplets of water, as well as a generous misting. He dropped a urate on my pants at some point and it was fairly yellow, with some extra mucus.. or membrane trailing the end of it. I gave him extra mist in case this points to dehydration?
K

What supplements if any? Usually too much calcium will turn urate yellow or foods which we know that's out- if the urate is dried out looking or chalky means dehydration-- just keep up w/ what your feeding and water and watch urate poop again- if it's the same again take a pic and post - I will have the poop experts look did he eat ? And uvb is 6-8 inches above him?

Original Poster
It's a little short and lumpy compared to his previous poopsies, I'll post the next one if it's looking similar. The UVB is just over 6 inches away from him and he's moving around a lot more like his old self! I caught him looking up and licking his lips a few minutes ago and he went up to his (favorite?) spot on the branch earlier today after going a few days without climbing it.

That said, still didn't go for a cricket I held in front of his face. He seems adequately more alert right now though, I think I'll let him stay up an extra hour or two tonight to let him soak in the rays? Then tomorrow morning, start dabbing slush on him again after about an hour of basking?

Original Poster
Also he hasn't really had an opportunity to take in his "repti-calcium". We dip crickets in them but he hasn't had one in days, and we put a little pinch in that smoothie. The calcium is his only supplement.
K

Ok keep offering his crickets w/ calcium d 3 and if he doesn't eat them add to his slurry- you want him getting his calcium - he will get vitamins out of his greens etc- that uvb should increase the appetite-- keep me posted
Share:
Facebook Twitter Pinterest Email Share Link