So I took My dragon Mulder out to give him a bath after his meal (was feeding him blackberries and collards and he got some on his face) and to help loosen up shed as he is finally shedding for the first time in the entire year we’ve had him.

Anyways I noticed his vent looked a bit odd when he was crawling around on my bed with his tail curled up, so I took a closer look and it looks like he might have had a small prolapse of some sort? Here’s the pictures I took. 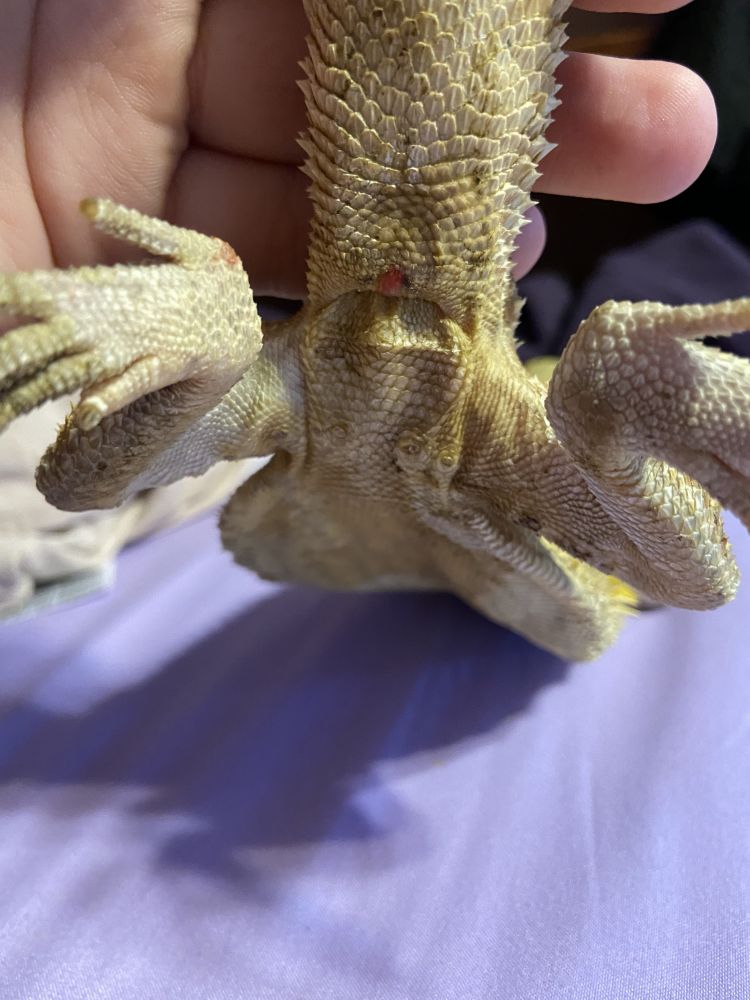 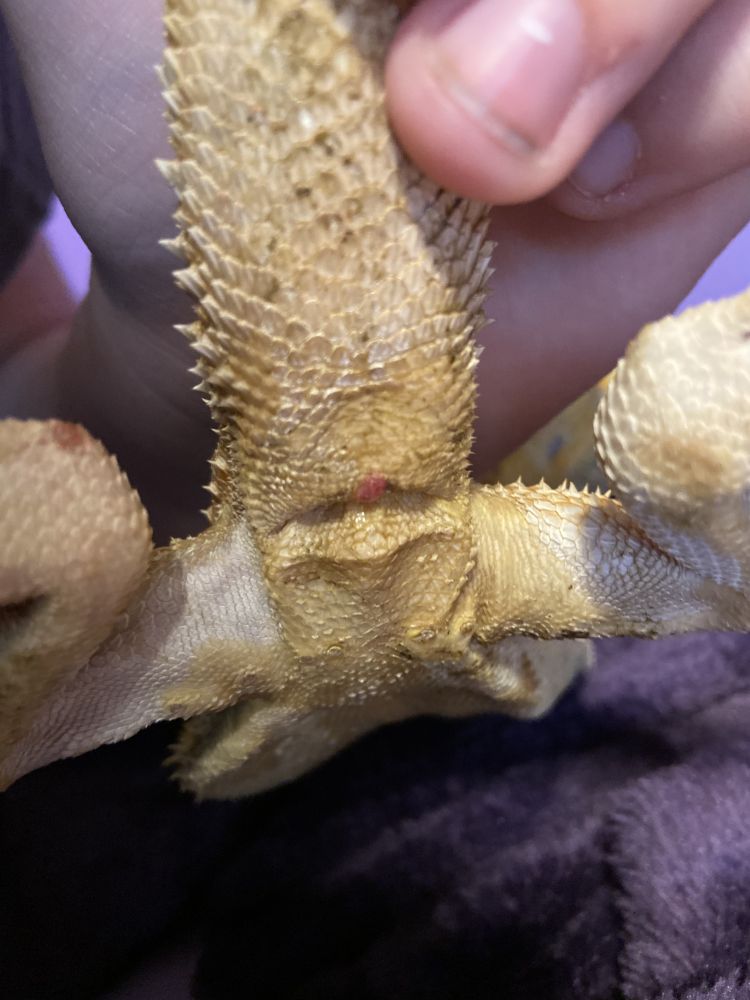 Pretty odd right? It’s not big at all but it definitely looks like he pushed out some flesh. So I’m not sure exactly what to do aside from give him a lukewarm bath with some sugar water and hope he pulls it back in? Does it look like a hemipenial prolapse or an intestinal prolapse? Or not a prolapse at all?

Thus far it does not seem to bother him at all, as he’s actively eating, running around and head bobbing at my other 4 dragons. 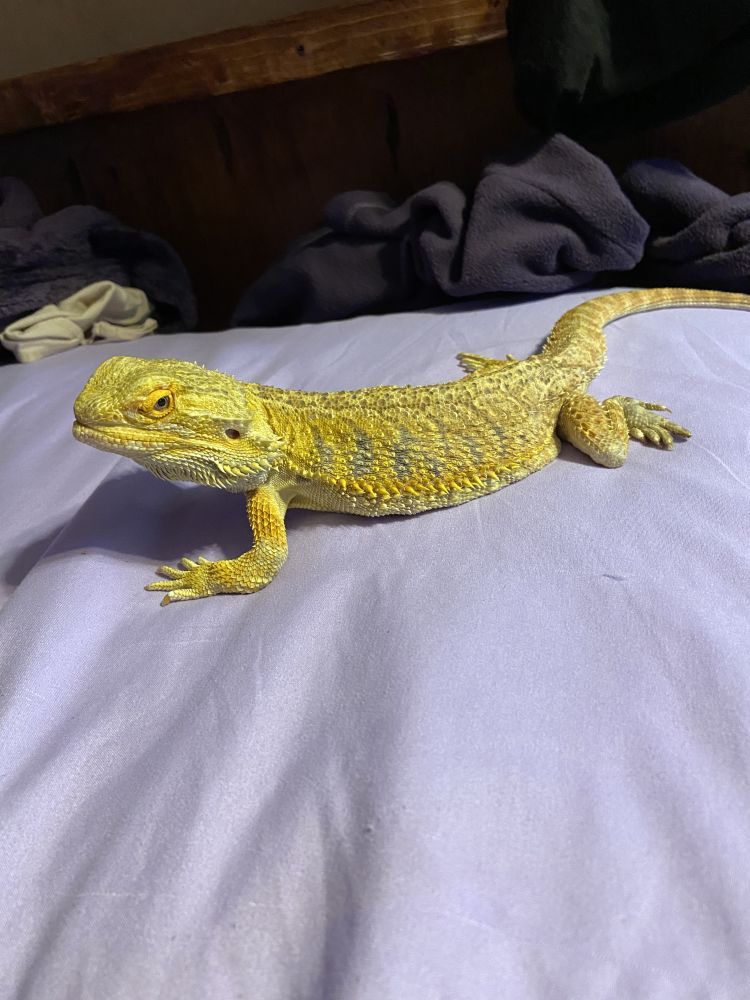 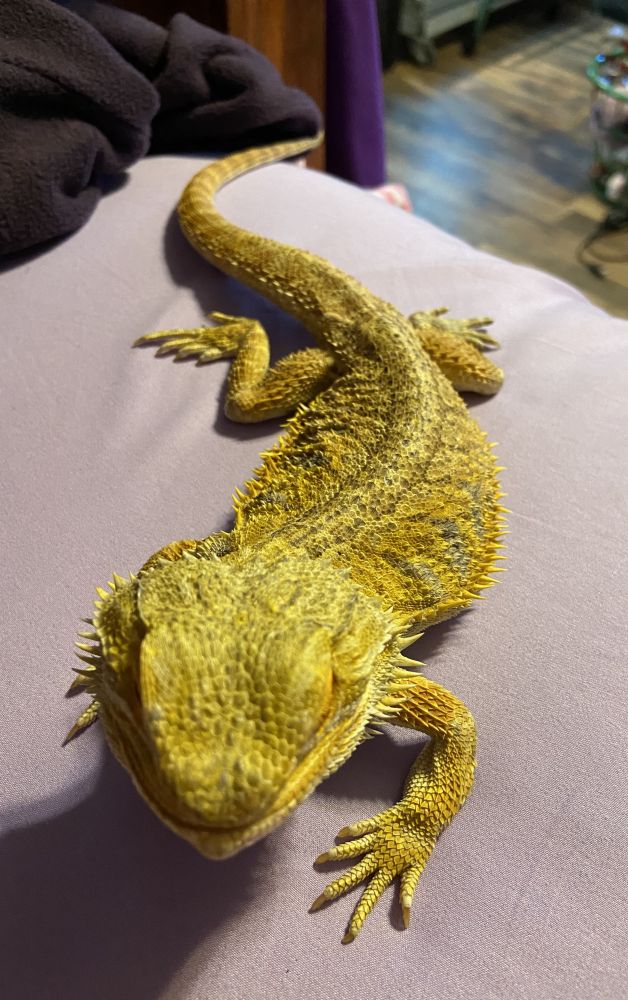 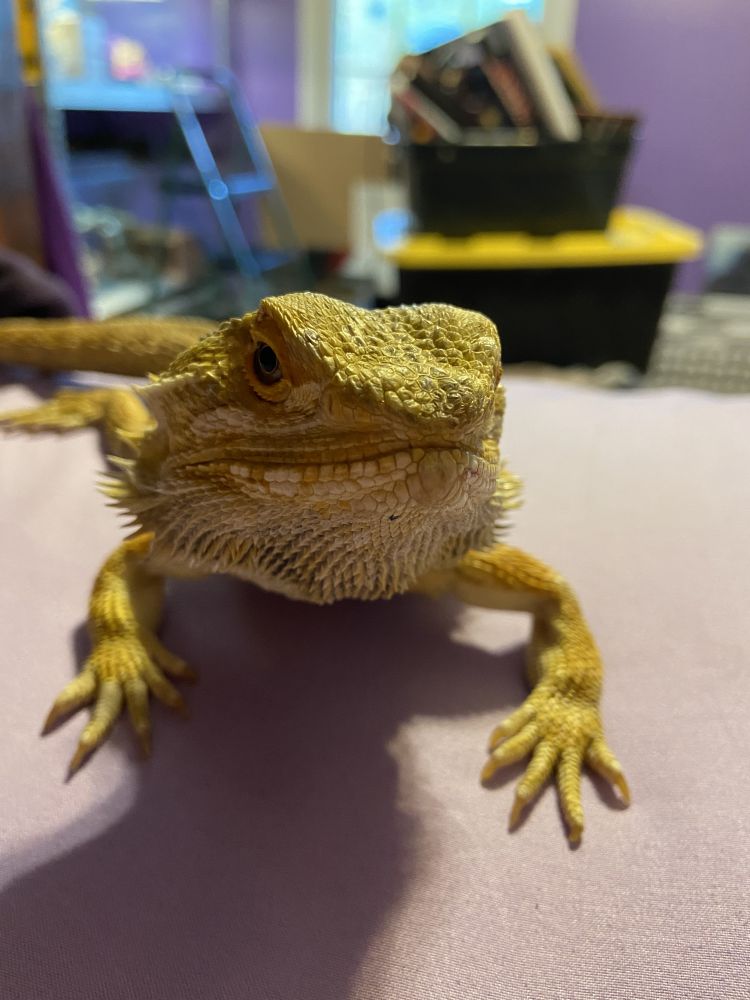 Sooo I’m not entirely sure what I should do. Any tips?

Also, Additional info about him that might be useful:

I have no idea about his age, he could be anywhere between 3-8 years old.
He is partially handicapped and is a bit special needs, as he previously suffered from MBD as a juvenile and has since then recovered.
Aside from slight permanent skeletal deformities and his back legs being locked in a permanent mostly closed position, causing him to walk with a bit of a limp and drag his behind around slightly (although since we’ve gotten and rehabbed him he has gotten considerably better at lifting his whole body and stomach off the ground when running), he acts no differently from a regular dragon and gets around great, eats like a horse and is very active and fast despite his slight disabilities.

He is in a 40 gallon breeder tank (alone) with a tube T8 reptisun UVB. Ambient temps are 105-110 basking spot, 85-90 warm end, and a 75-low 80s cool end. His substrate is replicarpet and paper towels (my others are on tile but the time seems to be a bit difficult for him to walk on)

He eats mostly collard greens and blackberries, while having a few adult Dubia once a week (we’re flat out of mediums and large dubias so we’ve had to feed the dragons 1-2 of our adult dubia until we can get more in).

Here’s some pics of the tank, his is the top. 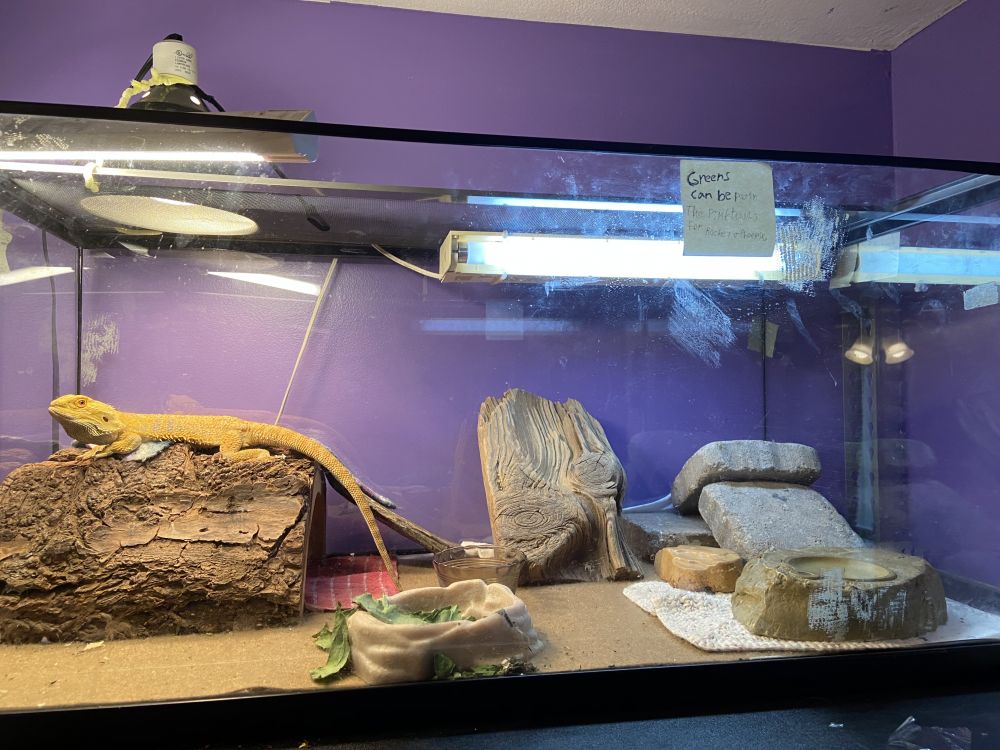 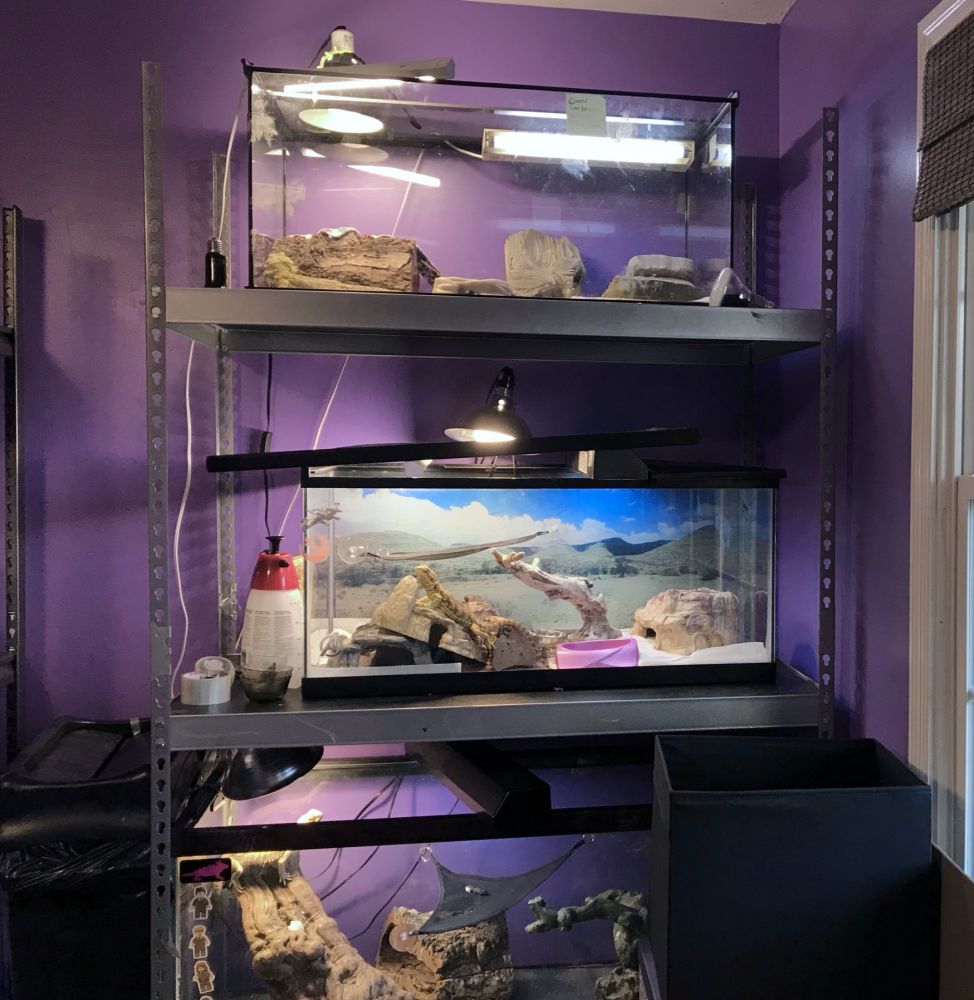 I’ll keep y’all posted on him, thanks.
-HippieLizards.

Small update on Mulder (posted from main account now)
So I bathed him in a lukewarm sugar bath for about 10 minutes, he drank some water for a bit and then tried to get out. Pics: View media item 61013 View media item 60495
The red but of flesh hasn’t been sucked back in yet, but he still appears to be doing fine. He’s basking right now.

If it doesn’t appear to come back in should I try calling my vet?
A

Hi there, at least Mulder enjoyed his sweet drink. Anyway, that is not anything serious, it looks like the veeeeeery slight tip of a hemipene but those can go back in on their own. Put some raw honey or vaseline on it but other than that it should go back on it's own. Try to gget smaller insects ASAP, crickets, a few superworms because he may straining to digest + excrete those large dubias which might lead to prolapse.

AHBD":12vvc2oj said:
Hi there, at least Mulder enjoyed his sweet drink. Anyway, that is not anything serious, it looks like the veeeeeery slight tip of a hemipene but those can go back in on their own. Put some raw honey or vaseline on it but other than that it should go back on it's own. Try to gget smaller insects ASAP, crickets, a few superworms because he may straining to digest + excrete those large dubias which might lead to prolapse.
Click to expand...

Hi,
It still hasn’t gone back in yet, and it’s probably a trick of my eye but it looks like it’s been pushed out even more a slight bit. But I’ll put some honey on it and keep an eye on him.

Yeah I stopped feeding the big dubias since it did seem like he was having issues eating those, so in the meantime I’ve just been feeding him greens and berries until we get more decent sized bugs.

Update, Mulder sucked it back in finally and appears to be doing well! He also did a MASSIVE poop (for him at least) while I was gone, so yay lol. He’s all good. View media item 60496
A

Good to hear ! He is pretty thin, hopefully you can get some bugs that Mulder can enjoy. If you only have adult dubias look for ones that are freshly shed or if you don't have any try cutting one up in to small pieces for him.

Yeah, I know he is pretty thin. I’ve been trying really hard to rehydrate him and help him gain some weight. Thankfully though he’s put on a lot of weight since we got him. Poor thing was just skin and bones at first. He’s been recovering slowly but surely.

Although since his appetite is so large yet he isn’t putting on anything, I’m starting to wonder if he has some sort of parasite that’s been eating up his nutrients? Idk, I’m going to try and get a fecal test on him soon.

Glad to hear that he is much better now! It sounds like he was possibly a little backed up
& had to strain a little bit? Maybe give some extra fluids along with some canned pumpkin
or sugar applesauce for a few days in case he is a little dehydrated.
Let us know how he is doing.

N
norrisjill925
Google Sites is an amazing thing you can create free website as your own. look how I manage my site on Google Site
WearGlam USA
Today at 1:30 AM •••
K
Kacper
I need help my bearded dragon is acting strange when she eats its like she doesnt feel her tongue she walks in a very strange froggy way not like she used to
Yesterday at 2:29 PM •••

Brandon U.
Looking for advice and recommendations!!
Yesterday at 1:16 PM •••
N
norrisjill925
In this post, we've shared some fantastic Clothing brands. They Offer Wholesale Clothing in USA.
Carhartt Clothing Wholesale
Friday at 5:01 AM •••