*Editing to add an FYI, I've left messages at vet’s office about my still suspecting the possibility of CANV after stuck shed has improved, the Dr. who saw Mushu 3 weeks ago is on vacation so I’m stuck til next week bc other vet won’t talk to me*

We’re treating Mushu for coccidia and pinworms(approx 15mos old, rescued a month ago) w/Ponazuril and panacur… he’s supposed to be dosed with each one once every two weeks (not both on same day) for 4 total doses each per the alleged ‘exotics vet’ we took him to. (He’s had his second doses of both.) He was also diagnosed as being underweight (approx 380g, 19.5in about to tip of tail) with mild MBD (previous owner gave terrible husbandry) and I was very concerned about CANV/YFD due to certain yellowish spots on his belly and back. (Vet doesn’t suspect YFD but I’m becoming suspicious of his expertise since he didn’t seem to know about testing for it.) (Prior detailed posts in Health forum, Tracie was helping with advice but we appear to have lost contact a few days ago- here: https://www.beardeddragon.org/forums/viewtopic.php?f=6&t=260061 ) He’s currently in a ‘hospital setup right now with butcher paper we’re changing frequently and his entire enclosure and necessary accessories are being sterilized at least daily.

He was doing well and had a good appetite until Sunday when he decided he was no longer interested in greens or veggies at all… we’ve managed to coax him into eating a few blueberries here and there, and a couple of dubias and butterworms. We’ve given a couple of betadine soaks, applied lamisil to his yellowy spots and managed to free some really gross stuck shed with a soft baby toothbrush during his last soak. He’s drank some clean water during his soaks before we add the betadine to the water, but mostly been sitting on his basking rock looking grouchy. Yesterday evening I managed to convince him to eat a couple of dubia that I smeared with Zilla JumpStart in an attempt to get his appetite back. *of course as I was typing this my daughter got him to eat about a dozen small handfed dubia after glaring at his salad for a few hours.*

Just now he had a suspicious looking poop and I’m worried there might have been blood in it… am I being paranoid?? I suppose the reddish tinge could have been blueberry or even from the jump start gel… but I’d appreciate verification. 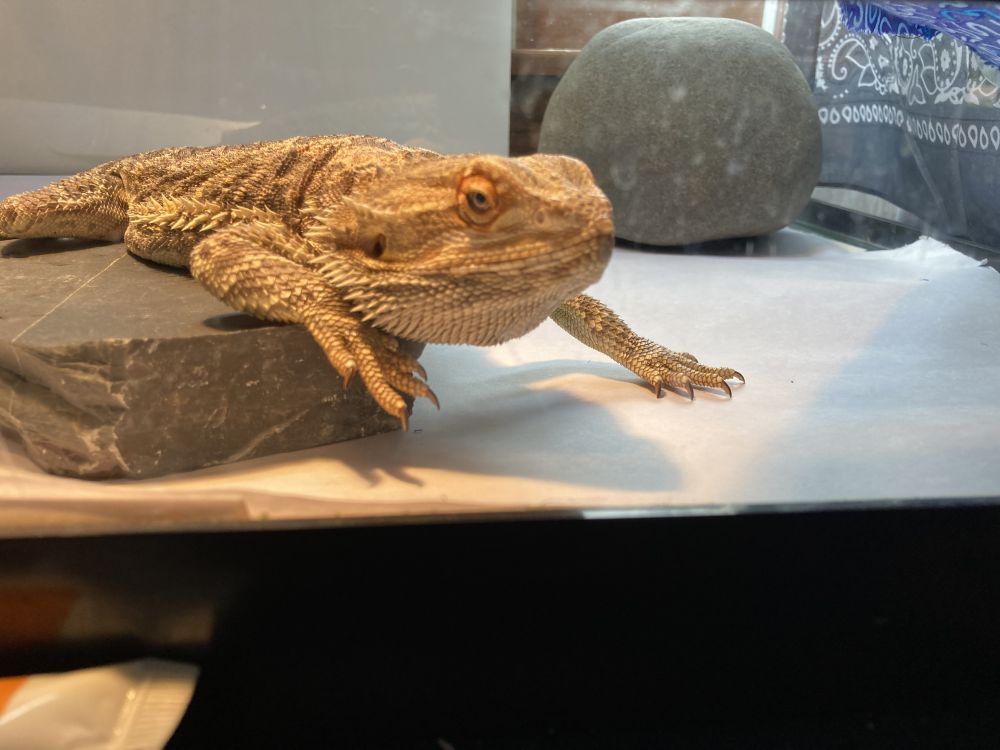 Suspicious - worried about the reddish tinge.. and the thready white bits-is that just streaks of urate? And do I see worms or is that just partly digested something? 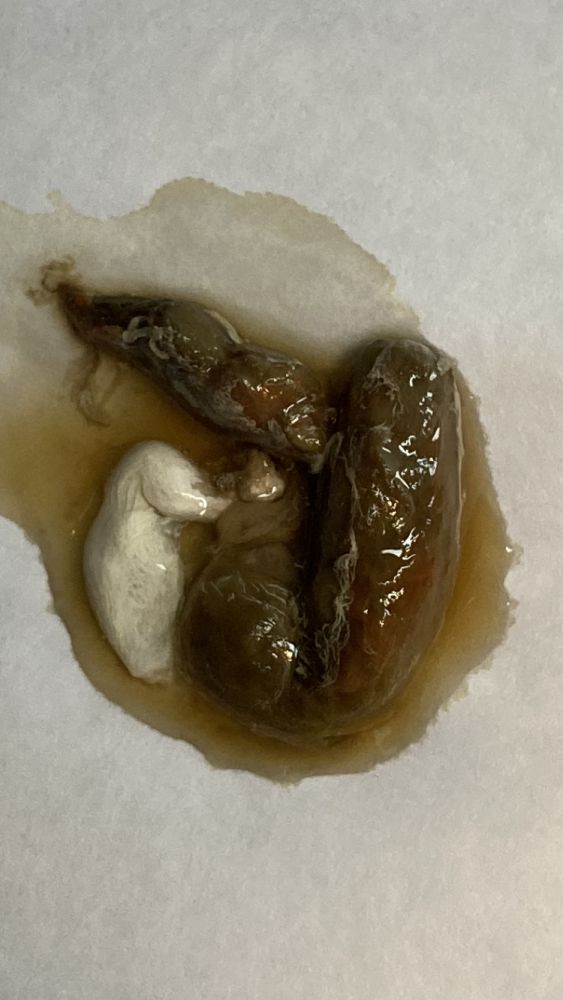 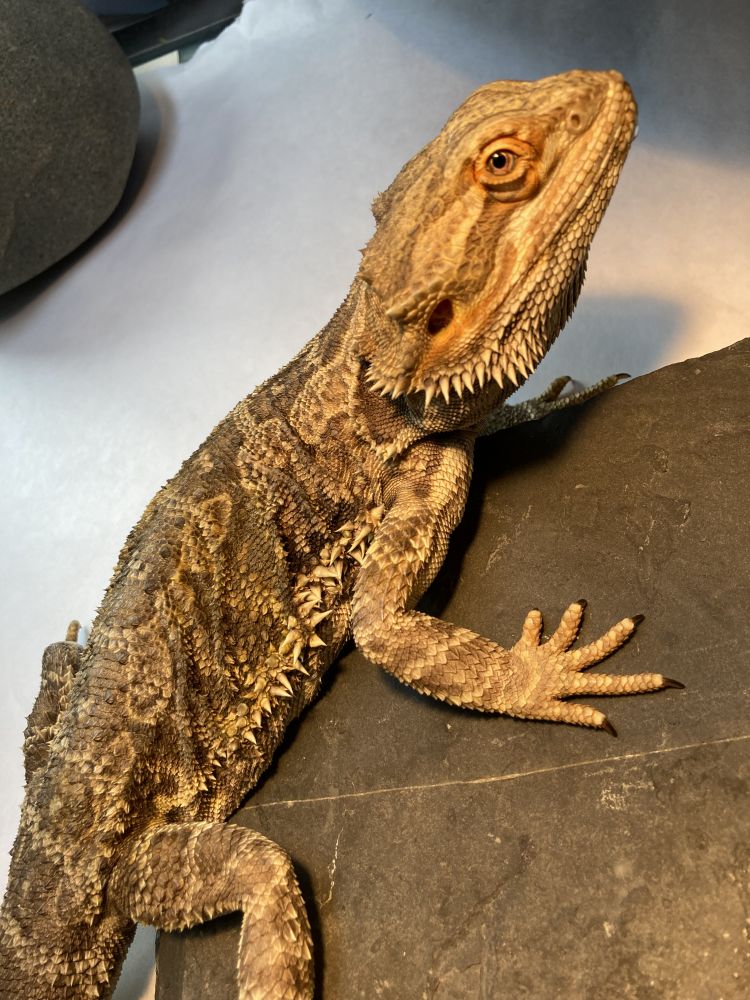 So sorry, if you sent a message I must not have gotten it!
How is your boy doing?
I had mentioned on your other thread to possibly use some probiotics if possible. The
Zilla jumpstart should help out, it is molasses based. How often are you using it?
Keep trying to get him to eat some greens, & keep him well hydrated daily. Sometimes even
the mildest of medications will dehydrate them & stress their systems.
So his shed has come off some & the skin is looking better now?

So sorry, if you sent a message I must not have gotten it!
How is your boy doing?
I had mentioned on your other thread to possibly use some probiotics if possible. The
Zilla jumpstart should help out, it is molasses based. How often are you using it?
Keep trying to get him to eat some greens, & keep him well hydrated daily. Sometimes even
the mildest of medications will dehydrate them & stress their systems.
So his shed has come off some & the skin is looking better now?

Hiya, no worries I probably did it wrong! Lol. Yes we definitely got a lot of old shed released in his betadine soaks.
I gave the jumpstart just that one time and it seemed to help a bit. He *is* taking a bite of greens here and there -still doesn’t have much of an appetite for them- but he seems keen to take live insects when they’re offered. Daughter is offering dubia and a couple of butterworms every other day. I’m wondering if this is more ‘stubborn beardie’ than anorexia (aside from the couple of days he wanted nothing) since he’s getting more protein he’s just not bothering with the greens, maybe? We’ll continue to gut load his dubia with fresh greens, so he’s at least getting some of those nutrients.
The order I placed is scheduled to arrive Monday, so when it gets here we’ll have the probiotics & bee pollen. I also ordered more syringes so will try to inject his butterworms with extra fluids & the probiotics.

He’s still basking 80% of his waking time, the rest of the time he’s on his other rock watching out the window or his hammock watching the little one play… haven’t seen him glass surfing at all lately, I’m hoping that’s a good sign. His back looks a fair bit better, when he’s pancaked the two patches on either of his flanks still look yellow tinged, but not as unhealthy and ‘crusty’ as before… I’ll have to have my daughter show me his belly again, he doesn’t like me enough to let me lift him to take his belly photos myself.

How is your dragon doing?
That's great his shed is looking better now, it does take time for the scales to lift.
I hope the probiotics help him out, usually they are very helpful. At least he is spending
a good amount of time basking now.
They definitely are very stubborn when it comes to eating their greens, so just keep trying
with him. Hopefully he will start eating more of them soon. Gutloading his dubias with the
greens will definitely help. You can also make up some green slurries for him too.
Are you still using the Jumpstart a few times per week? The bee pollen should help out
some for his appetite.

Let us know how he is doing.
Tracie