Hi all, first time posting in the forum, but long-time lurker.
Many apologies in advance for length :

Our baby Idris (~3-4 months old) has had a rough past few days. We took him/her (will refer as he/him for ease) to the Emergency vet on Sunday (now Tuesday) for some pretty severe respiratory distress.

He had his usual shower after getting his vent all dirty, was basking afterwards when I started to notice some breathing changes. He even slipped off of his branch onto his back and couldn’t flip over, so I flipped him onto his feet. Our regular vet was closed, so we took him to emergency. They kept him for a couple hours and said he was dehydrated and probably needed calcium from our regular vet. They sent us home with critical care (0.5ml / 4-6 times a day) and told us to soak him twice a day for hydration and call our vet for the calcium.

Come Monday (yesterday), we proceed with his treatment and called the vet for calcium - did his critical care and soaks, but he seemed to get worse with the liquid feeding. I’d even say he was pushing the liquid out of his nose as opposed to swallowing it?? And being fed liquids seemed to agitate him, after swallowing he would breathe heavy and his body would almost roll over onto his back. He rolled over a couple times and seemed to not even try to get back up, so I flipped him onto his feet. I called the vet AGAIN to let them know about the stringyness in his mouth and the bubbles in his nose etc - she made an exception and saw him last night, suspecting pneumonia.

I have a few questions about husbandry changes, though.

With pneumonia / clicking while breathing, what is the best body position to keep him in? Since he’s not moving around, I’m wondering if there’s an optimal position for him to lay in to help him breathe/get mucus out?

What temperature should I be keeping him in while he’s sick? I’ve read to increase the basking temp a bit, but should I keep him in his basking spot all day? Which temp is ideal for his recovery/making sure his medicine works? Will higher temps help get rid of mucus?

How can I make sure he’s properly hydrated through his recovery? When I try to give him water via syringe or dropper, it’s as if it leaks back out of his mouth or nose instead of him swallowing. I’ve been tilting his chin upward while I give him water and it seems to help - I’d hate to make things any worse though


Today, he’s had 2 of his calcium injections so far, and has had ~1.5-2ml of critical care and roughly the same amount of plain water. He soaked once today and pooped once, has not tried to flip his body over at all since yesterday. He’s breathing rhythmically, but still with clicking sounds and in a gasping fashion. He just seems super tired and I hope that this doesn’t mean he’s going downhill.

Does anyone know good signs / recovery signs to watch out for? I’m waiting until his popping noises go away when breathing and hoping he’ll try to move or reposition himself.


Thank you so much for any advice, apologies for length

I am sorry your boy has had such a rough time, poor thing!
How much critical care are you giving & is it relatively thin for ease of swallowing? Have you
tried simply dripping it onto the end of his nose instead of trying to get his mouth open so it
isn't as stressful for him? You mentioned that it drips out of his mouth too much when trying
to drip it onto his nose?
Since pneumonia is suspect try to keep him warm overnight, around 75-80F to help keep his
immune system boosted. If possible, lay him on a slight decline in case there are any fluids
that need to drain out of his lungs. They do not have cilia in their lungs which complicates
things when they are trying to recover for respiratory issues.
Since he is a youngster, an ideal basking temperature for him would be 95-110F with a cooler
end of around 78-82. Be sure however, that he has ample area to cool down too.
Don't overdo the calcium injections because too much can cause renal failure, too.
Which UVB lighting are you using currently?
If you have pictures of him, along with your tank setup go ahead & try to post them for us so
we can take a look at them. 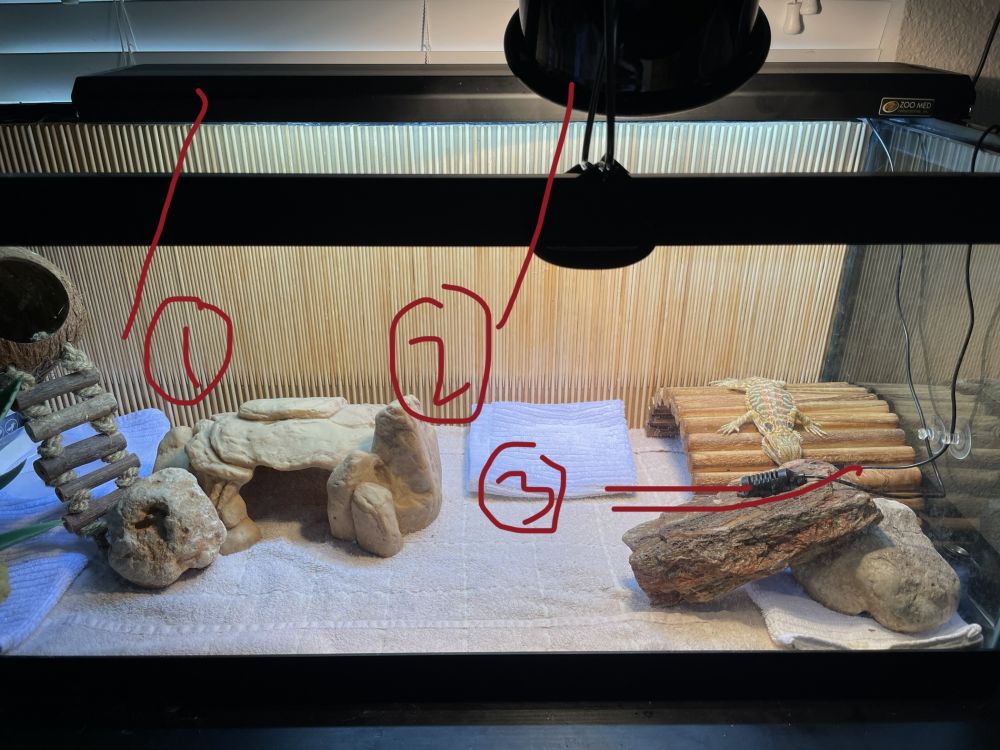 3. Hygrometer and temperature probes, his humidity is at 31% and cool side ambient temp is 81° 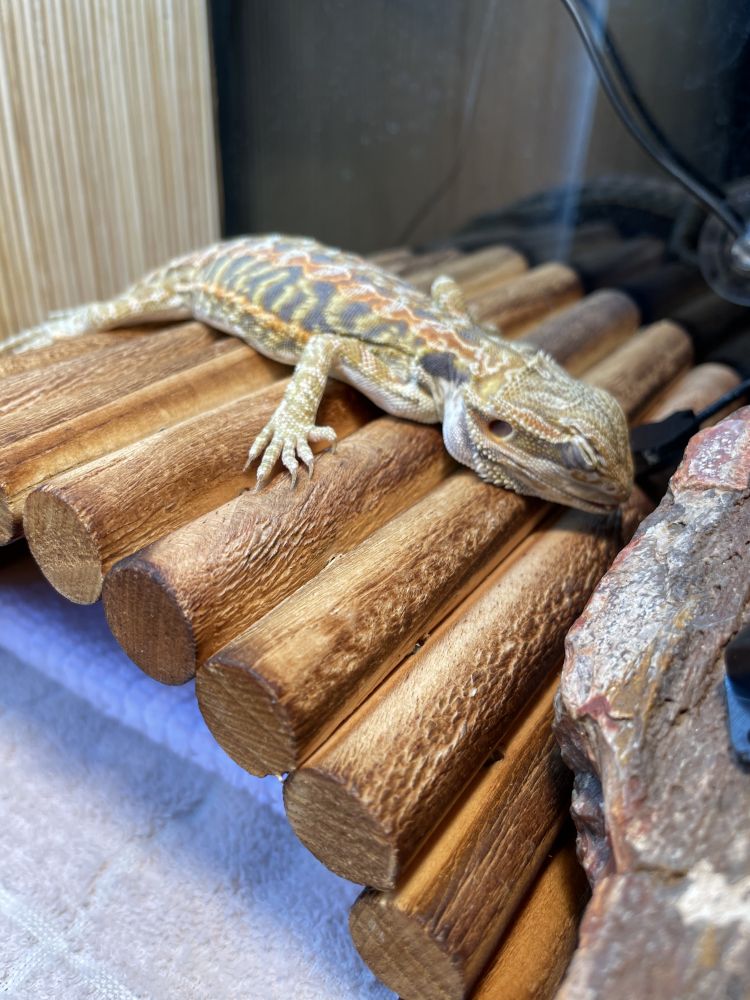 We positioned him at a slight decline, haven’t noticed him cough anything up - he’s never coughed, just kind of gasp for air and does these little sniff things (when I hear the clicking/popping, like a person clearing their throat or when we have an itch in the back of our mouth)

He opens his eyes when he breathes, but looks almost as if he’s going in and out of consciousness between breaths, but when he does breathe - his eyes look good / alert and responsive

He breathes at a steady rate, but he doesn’t move himself or open his eyes between breaths

Should I move him from the hot to cool side to regulate his body temp through the day? Or should his body temperature be kept in a certain range?

I don’t want to give him too many injections and overwhelm him, so I only give 3 calcium shots a day instead of the 4

He usually has more stuff in his enclosure than this - he has a branch that spans the width of the tank, but we removed it along with his hammock and higher climbing spots (so he wouldn’t fall and to decrease potential humidity issues)

Should I continue to soak him for hydration or should I try to give him water via dropper still? When I drip water onto his nose / partially open mouth, he doesn’t try to lap up the water as usual. The drop will stay there until his next breath or it’ll go down his chin instead of into his mouth. If I tilt his chip upward and drop water on the tip of his tongue when he opens to breathe, that’s the only way it *looks* like it works

How do I know if he’s aspirating the liquids or swallowing them the right way? He has not thrown up or had any vomit, but I also don’t want to put him through too much

Thank you so much for your help, I really appreciate it
K

Distance needs to be 12-15 inches from the basking decor piece directly above and please use the 10.0 bulb -- that UVB is what is going to help him get better
K

KarrieRee":2e0v438b said:
Leave the 10.0 bulb in and the distance needs to be 8-10 inches directly above the basking decor --- w/ it sitting on the screen it needs to be that distance --- I can see the screen is a wide hole type -- but please get your basking decor piece directly above him and the distance I posted -- if you want to move it so its unobstructed from the screen then distance would be 12-15 inches -- he needs this tho ASAP-- that UVB is what is going to help him get better
Click to expand...

There is no screen on the enclosure - we have had his UVB bulb unobstructed, directly above him as it is in the photo. It’s currently sitting ~9-10 inches away from him currently, is there a distance that’s too close?? The bulb is in a ReptiSun reflector hood, and it is not sitting on a screen
K

Yes distance for that T 5 should be 12-15 unobstructed --- I took another look and noticed there was no screen -- poor little guy Tracie is gonna haft to help w/ the medical stuff --she is on late at nite - how is he doing today ?

K
Vet couldnt diagnose my 3 year old beardie, im afraid meds may cause more harm than good, please help if you can!!!! Please!

S
Symptoms of MBD or RI?

B
HELP! Beardie doesn't poop, black beard, and spasming/twitching and bloated this morning but went to vet 3 days ago
2