Hello!! I've always browsed this website since i got my first bearded dragon, Oscar, as a baby. She was two weeks old when we got her (perhaps a little too young, seeing it in retrospect) but she grew up very healthy (shes had two vet checkups this year and she has been wormed, poo check etc- we had a lot of guidance from our reptile vet on how to care for her!)

One thing that we did encounter though is that she grew pretty quickly. She is only 10 months old and she had already long outgrown her old vivarium, so we went ahead and purchased a brand new one that would be more comfortable for her adult size.

In doing so, as we were visiting the reptile breeder we had purchased her from, we saw another spirited smaller beardie that we fell in love with! He was very cute and one of the last two beardies left. (The other one was a bit sick, though it was housed separately from this one- they both were housed alone when we arrived)

So we purchased him, figuring he could use Oscar's smaller vivarium until he were to grow older (which we would have to upgrade again, but thats not a big deal since the one we bought for Oscar is a wooden stackable one, so we would likely just purchase the same one for him as well in the future and simply stack them)

Something that bothered me a little bit though after the purchase was done, however, was that as we were leaving, an employee of the breeder said "ah that one was born in January"--- that would make him 9 months old... One month younger than our girl, but he's significantly smaller in size. He really looks comparable to Oscar when she was around 4 or 5 months old..

Upon further inspection, we noted some other possible small issues as well:

• His feet and toes look quite swollen and a little mis-shaped, this could be because of the shed...? He did have some very obvious shed on his extremities.

• He was biting at the rock accessory we placed in his vivarium, which is a behaviour that may indicate mineral deficiency from what I've read..?

• His eyes and face looked a little sunken in, but not too dramatically so; I assumed we could just bump up his feeds a little and ensure hes bathed every day and see how we go

His appetite was very good yesterday (the day we bought him), and today this morning. He ate many woodie roaches, cut up vegetables, all with calcium/d3 dusting and a small few cut blueberries for the salad garnish. He has also done a poo today and it looked normal.

However, over the course of his first day his behaviour changed a lot. Later in the afternoon he was not basking and even trying to hide.. He was very sleepy like, but responded to me by opening his eyes and looking at me if i went near the cage. Still, his decline in activity seemed pretty sudden, and he was looking a bit frail and just very tired.

I also noted this morning on his leg, some yellow patches on his shed, though it doesn't look too different from the rest of his coloration, its randomly placed enough to lead me to concern. Here are the photos:


More of Taro up close:

Picture from yesterday, immediately bathed when he got home as his legs looked a bit sheddy: 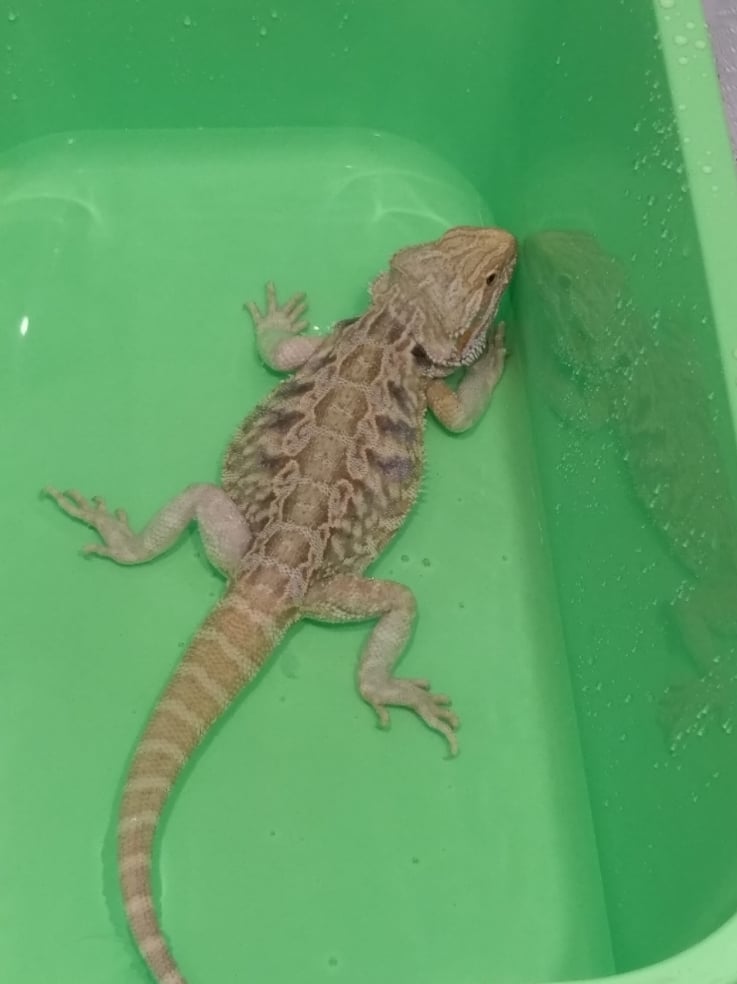 Some pictures of him today, in the afternoon when he became quite drowsy: 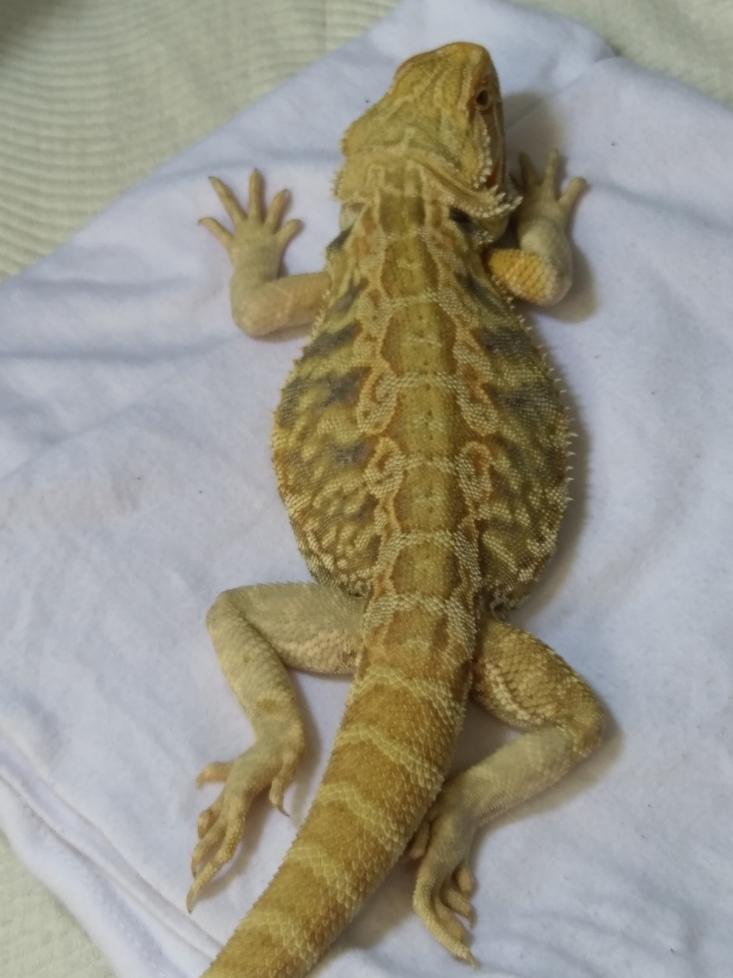 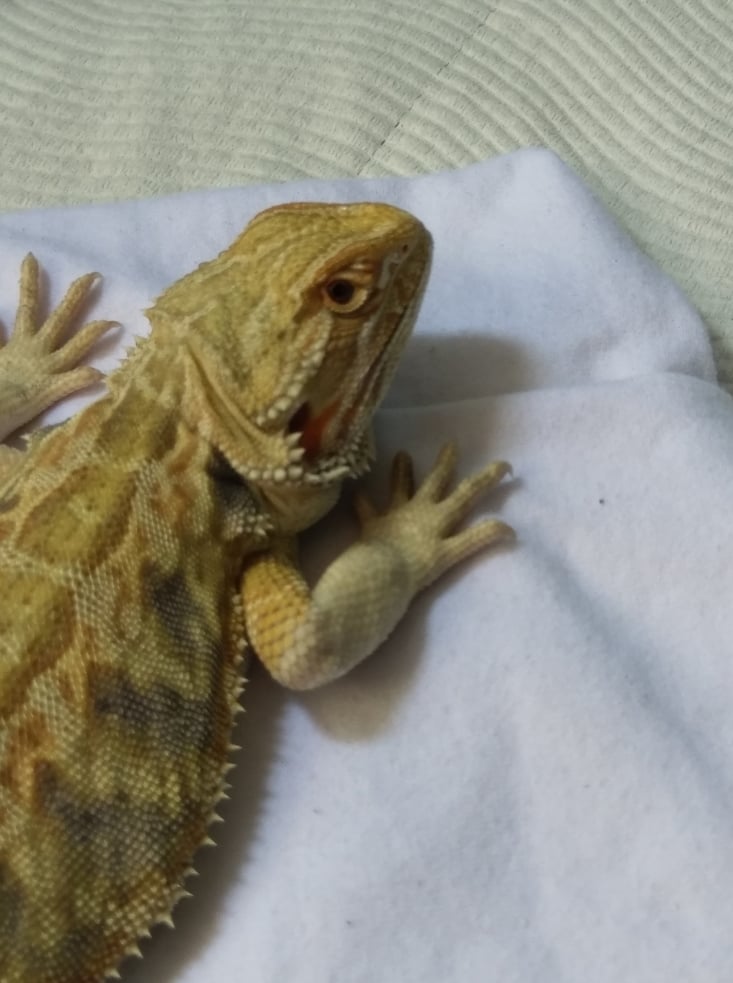 close-up of the area I'm concerned with: 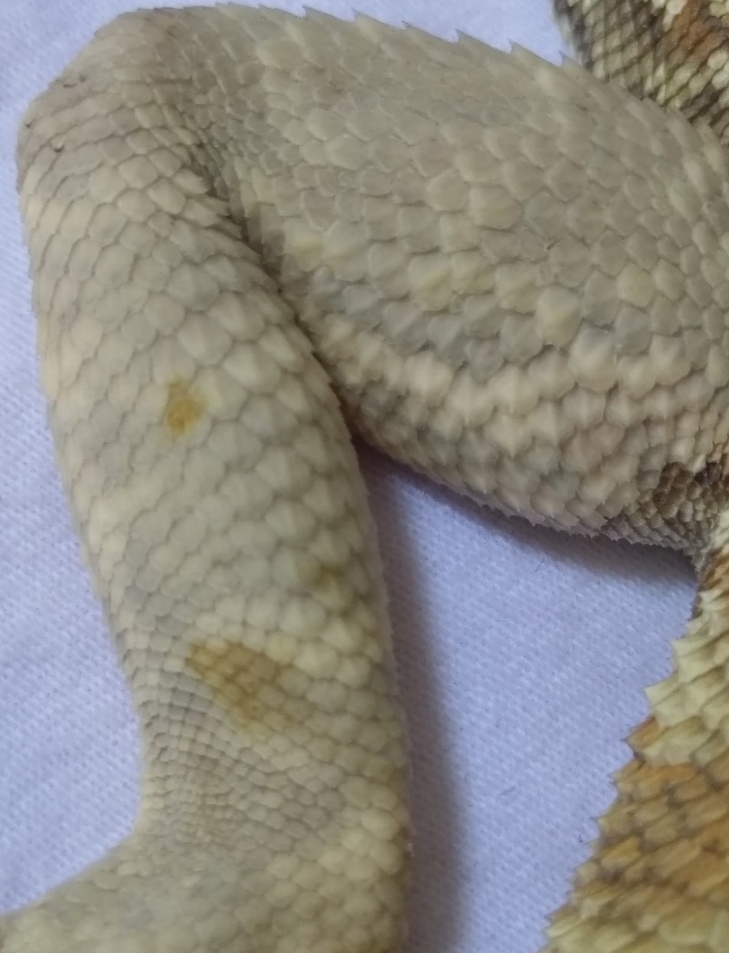 A comparison, of Taro(left, 9 months old Male) and Oscar (right, 10 months old Female) --- (just a quick note, we have been diligent with hand washing between dragon handling and ensuring no contact is shared as a precaution before we even discovered the possible issue, so i am not worried for Oscar in particular having been infected unless its airbourne somehow. My husband was handling Taro on this picture, while I placed Oscar on the opposite side.) 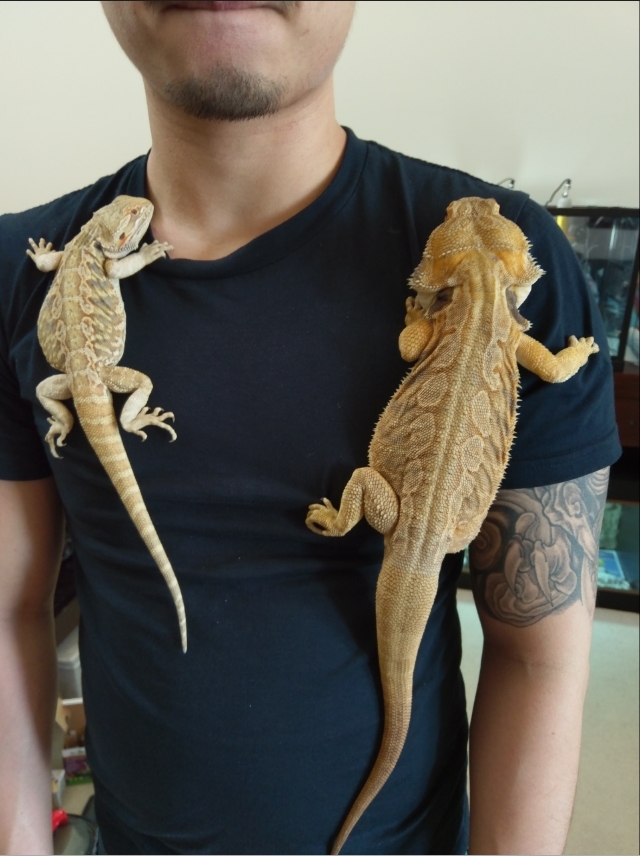 The size thing did worry me a little bit but I know some beardies can just vary in size and genetics and its not usually something to be alarmed about. The one thing I am worried for though, is the drop in little Taro's behaviour and the little patch on his leg!! He's so precious and has such an incredible nature, I'd really really hate that something like YF could be happening... we plan on taking him to our vet sometime next week unless he shows any further signs of deterioration, but i just can't get it off my mind and was hoping I could get an opinion here so I know what I could be up against.

Thank you very much in advance for taking the time to read my long post! 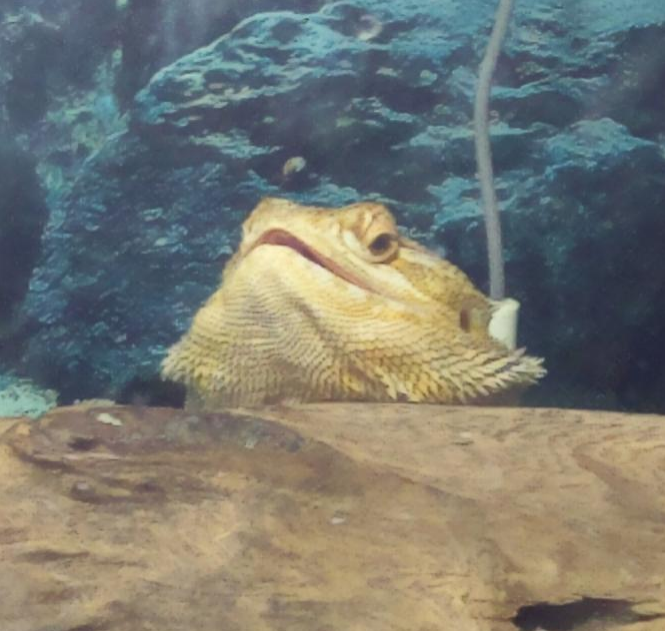 Original Poster
very embarrassing update... when i used a warm washcloth to try to give him a little bit of a wash... most of the yellow that i posted in the photo came off... wow... i feel really silly,,, still, there is a small stain of yellow there, although its most likely residual that i will have to wash off tomorrow in the bath with a toothbrush :lol:

im embarrassed but relieved above all else... still, I am a bit concerned about his change in behaviour as he does seem a bit weak and sleepy today.
A

Hi there, I'm glad that you discovered that it's not Y.F. Taro's legs do look a bit swollen, but they can appear that way before the shed comes off so wait + see. As for his behavior, it may be a combo of things....relocation stress....maybe ate more than he's used to, maybe sees the big dragon that looks intimidating ? Are they in view of each other ? Taro's size isn't extremely small as in an unhealthy way, just smaller than usual and may always be.

But wow,that Oscar is a huge dragon. ! Did I read correctly that she's 10 months old ? What is her actual weight + length ?
C

Yes the swelling and the bulbous joints around his toes do worry me a little, as with Oscar we didn't see much swelling when she would shed; I've given Taro a thorough bath today and I bought some baby toothbrushes to get in between all the toes and the cracks and give him a little bit of a scrub; he seemed to enjoy it very much!

They aren't in eyesight when in their vivariums (one is ontop of the other and separated by a shelf), but when i was moving oscar and placing Taro they did see each other and Oscar did become black in the beard and started to bob, and in turn Taro waved his arm at her quite a bit! His arm waves were so adorable! I never seen Oscar's beard actually get black before though... it was definitely something.. she only did it that one time though. After that even when she may have seen him a bit when out she didn't show any further signs of agitation whatsoever, but he may still be feeling stressed..

Also the food thing makes sense, we do feed our lizards pretty generously.. Even with Oscar the vet told us to tone down the insects because although they didn't feel she was obese, they were concerned if we continued to feed as we were it would be a problem later on. Now she only eats the insects about 3-4 times a week, but still resumes generous amounts of daily salad with occasional fruits.

And the relocation would be a given too, it is a new environment for sure ehe

His appetite was very high this morning again, and his activity very good during the early morning hours, but after about 1pm he falls off and gets a bit lazy and naps a lot.. he seems to be ok, his shed worries me but we will be taking him to our vet when my husband gets a day off next week Maybe he just is a lazy dragon??


Also as for Oscar, she has always been pretty huge which may be why i was a bit confronted when I saw how small Taro was for his age (Oscar was our first reptile ever); She was born last December and right now she weighs 470grams and is about 21-22 inches in length hearty girl she is!!
A

Yes, this may mostly be attributed to stress. Taro's entire world has changed, it would be like us moving to a totally new place to live + environment without being told that are going until that very day. It's usually best to wait about a month before a vet visit so he can settle in and his stress level will have gone down.

BTW, are you sure Oscar is a female ? Looks like it may be a male since you mentioned the b.beard , plus that's a big blocky head for a girl. If you want to, snap a few pics of the vent with Oscar's tail curled up high in the air and post them here. Here's another method :
http://imgur.com/r/BeardedDragons/s2OIALb

chestermymunchkin
setting up a tank for a garter snake in a few months!!
Saturday at 10:23 PM •••