Hey everyone, my name is Kevin, Im 29 and have two beardies at the moment. My female, about 9 or 10 months old is thriving, eating as much as her heart desires and just overall doing fantastic. My male however, about 7 months old, after purchasing him from a very well known small reptile shop here in west palm, has had it a little rough from the start. As excited as I was, I literally spent a good penny on the set up, enclosures and did a lot of research so I can be as prepared as possible for our new babies. However, I guess being new to this one cannot be prepared for everything. My male beardie was not eating properly well after the first week of being home which concerned me. Did not realize at that moment that he was also not properly digesting his food. My concern was he would eat 3 to 5 crickets or only 2 or 3 discoids and crawl back up on his log. My co-worker, who owns an 8 year old beardie and many other reptiles including 20 pythons, frogs etc, told me to try superworms. My beardie LOVED them and ate like 8 of them and probably would have eaten more but stopped him there. The day after he prolapsed the first time when he pooped. I did exactly what the shop owner instructed me to do and took him to the vet the next day still was not aware of him possibly having problems with his digestion. Doctor recommended we give him something for parasites as this is most common he says and said all looks well with my beardie. After a few days he prolapsed again. So a good week after that I brought him again and mentioned I notice my female has literal mountains of poop and he barely even has a little turd. So we tried something in the direction of a light laxative. After that he was eating like a champ for the very first time and finally had an apatite which excited me and my girlfriend very much and we just wanted him to be happy and keep eating. It was most likely too much too soon and it happened again!!! We are really concerned since we try to be great parents and everywhere we look this little guys eat so much and are fine but ours just isn't having it. So again I spoke with my vet who was also highly recommended and he said we should let him fast for a week before we go into closing the cloaca off for a while. Now we are in the middle of trying that and its tough because it hurts our hearts to not feed him but our female and the way he looks at us is just ugh! So I would be eternally grateful for any advise as we would love to be great parents and I would love for my baby to thrive as he is gorgeous and I really love that little guy. Any advise is appreciated!!!! Thanks everyone!!!
K

Your lighting in the tank plays everything to do w/ digestion and over all health of the dragon --- I cant help much w/ the prolapse part but we have several on here that can --- I can however help you w/ your basking temps and UVB -- first tell me what your basking temps are and how your taking them NO stick ons please -- next UVB what are you using coil or tube where in the tank is it??? Please NO coils
K

KarrieRee":2z4p9eg5 said:
Your lighting in the tank plays everything to do w/ digestion and over all health of the dragon --- I cant help much w/ the prolapse part but we have several on here that can --- I can however help you w/ your basking temps and UVB -- first tell me what your basking temps are and how your taking them NO stick ons please -- next UVB what are you using coil or tube where in the tank is it??? Please NO coils
Click to expand...

So the basking area is around 100.. sometimes 98 and sometimes 103. The cool side is at 80. In the middle I have a humidity and temperature gauge that is inside the enclosure on the glass and all openings are still open, it reads between 41 and 43 percent humidity and usually around 88 degrees mid enclosure. I use a temperature gun i purchased with really good ratings for those readings. I have a tube UVB light from reptisun, BUT it is on top of the enclosure and not inside as is the basking light which is a bulb from zoo med. Tried to do everything by the books and maybe i need to get the light in the enclosure, im just not too good at figuring out how so its mounted properly and does not fall etc. May try with some zip ties maybe?
K

Yes get it inside the tank if that screen is a fine mesh ---- 12-15 inches directly above the basking decor piece --- https://www.homedepot.com/p/GE-15-ft-Cable-Ties-Hook-and-Loop-Spool-Black-10375/304220195
I use this stuff it works great its like a Velcro strap cut into strips wrap around the fixture or these
3 M command Velcro fasteners- picture hanging wire – long plastic zip ties-- fishing line -- potted plant wire hangers --
In the meantime I am going to flag your post to Tracie our vet tech mod - she can help w/ the prolapse and give you advice on that issue but the placement of the UVB is crucial
K 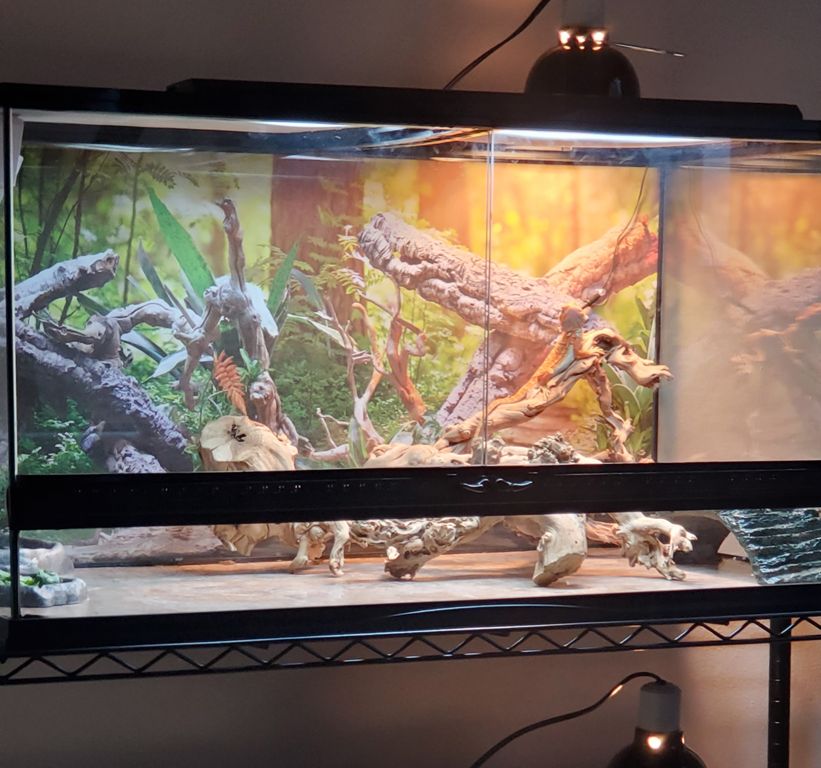 Hi there, I agree with the vet. Don't feed him for at least 4-5 days so he doesn't have to poo. Let his cloaca to heal a bit, then start feeding him small meals, it can be twice a day but cut out the supers until he's past this problem. Give him smaller or freshly shed insects that are easy to digest. You might need to get the tank jjust a bit warmer, 105 on the hot side. Offer plenty of hydration too.

Poor guy, that cannot be fun for him, at all!
As AHBD suggested, take about a week or so to let him try to heal up some. Hopefully he
will start to get back to normal. Giving just oral fluids for now will keep him hydrated.
Are you keeping him warm overnight? Has the prolapsed area stayed in tact now?

Let us know how he is doing.
Tracie

I was checking in to see how your boy was doing? Let us know how he is progressing.

Original Poster
First of all thank you all for your insight and for giving me some great tips! I will start feeding him some crickets today to see how he does. I have raised his basking spot to make sure he reaches his 105 degrees in heat to see if that helps with his digestion. He did not like his fasting period at all but made sure he was hydrated and look forward to giving my boy some food again. No prolapse in sight so far but keeping a very close eye on him.

That is great to hear he is doing better now! Be sure the crickets are small & hopefully he
will handle them well.
I'm sure he didn't enjoy not eating though. Definitely keeping him at a little warmer at his
basking site should help also.
Keep us posted on his progress.

Can you get hornworms? They are soft and juicy, eat to eat and pass.

How is your boy doing, is he improving quite a bit now?
Please keep us posted on how he is doing.

B
Prolapse aftercare for a 12 year old beardie
2

K
Vet couldnt diagnose my 3 year old beardie, im afraid meds may cause more harm than good, please help if you can!!!! Please!