Staff member
Moderator
Skinky oasis over there! I wonder if they are relatives or just a friendly pack.
K

Original Poster
I suspect all relatives. Female water skinks and their babies and juveniles form social groups / colonies, unusual to see just one solitary water skink in an area.
K

Original Poster
Water skink invasion in our house today .... had Cheakie and 3 others roaming about , think they all came inside because they followed Cheakie and we had a very violent southerly buster heading our way ( they have all worked out it's safe , warm and dry inside ) .

Cheakie and retinue explored every room .

Were a bit scared of the loud thunder and rain , VERY BIG STORM we went from bright and sunny to very dark inside 30 minutes , they soon all figured they were safe and then switched to exploration and foraging / hunting mode. Being a softy I gave them each some mealworms and crickets, didn't take long for them to work out I was the one who was tossing the bugs to them .
K

Original Poster
Finally got a really good look at the juvenile water skink who has moved in with Cheakie and her adult sister (?) / daughter (?).

Was hanging out in the lounge room and kitch most the morning and until I gave it a feed of mealworms.
Is about 6 to 9 months old judging from it's body size ,about the same size Lucky was when I rescued him , and about the same size Cheakie was when she had her (?) stint as a pet last year ( for a couple of months before climbing out of the small skink tub and disappearing under the furnature.

I'm pretty sure the little skink wanted my wife or me to feed it , and was hanging out in the hope of some food , once fed , promptly retired under the lounge.

Here I am , I'm the human yet am trained and manipulated by yet another wild skink.

Original Poster
Another bout of severe weather this after, supercell w/ lots of wind and hail and rain. Cheakie seems to be visiting when she senses foul weather is approaching . Knows it's dry , warm and safe inside with us and "hey, the hoomans might give me a meal too" .

Crawled onto my up turned hand , after momentarily trying to eat the yellow button the TV remote , then not being able to eat the button she had no hesitation in taking a mealworm off my hand and stayed there allowing me to introduce her to handsurfing , ended up looking over the edge of my hand and then crawled up my arm onto my shoulder.

When I called my wife into the lounge room to see and take a photo , got too close and that spooked Cheakie and she leapt off and hid til my wife left.

Introduced Cheakie to BSFL today too, loves them , and the flies too.
K

Original Poster
Hand fed Cheakie again, this time took cricket from between by my finger tips and a meal worm off my open up turned hand and let me tickle her under the chin.

Hand fed Cheakie several mealworms by hand today and had another handsurfing session , Cheakie is definitely fatter than Fluffy , and I suspect pregnant ( I could see the baby bumps clearly ).

I think Cheakie likes me and trusts me.

Meanwhile the little juvenile has been hanging out on top of the lounge , watching and studying , very curious about hooman - skink interaction , but finally managed to slip 4 mealworms to it when it came up to me on the floor in a spot that was outside Cheakie's line of sight later this after ( cleavor little skinky , it knew I was giving food and worked out where to go have a chance of getting some with out Cheakie robbing it worms off it ).
Think Jr ( I'll call it junior for now ) would be lucky to be 8g all up , is more tail than anything else , but is old enough to be developed past the skink baby stage and be nearly adult in appearance ( only in miniature )

Had a siesta about 6pm on the lounge before diner and was woken by something trying to eat my little left pinky ( hand on lounge next to me ) .... you guessed it , Cheakie was daintily biting on the end of the finger .... " Waky waky lazy hooman, I'm hungry , feed me " .

Cheakie hung out with me all afternoon til about dust ( she's a real character and sure has some smarts too ).

Fluffy was interested in her and Jr too , she was watching from her tank most the afternoon , and even headnodded back at Cheakie .
K

Original Poster
My wife met the resident wild eastern bluetongue today , it's created a home for itself under the lowest sleepers at the W end of the L shaped head ( there's a gap about 2" high where the lawn meets the old path ). Only saw it's big triangular head peaking out at her as she went down the back steps .
Been hearing it moving about in amongst the long uncut grass and lawn weeds for weeks , she thought it was maybe a jacky dragon , a hatchling or juvenile eastern water dragon , or a water skink or maybe a dudia or velvet gecko in the grass that she never actually saw. Lawn was mowed and edged on Monday , now we know .

Cheakie was very excited this afternoon after we had our 1st Pfizer jabs, yes Cheakie and Jr both checked out the GP while she was here ( had to warn her not to leave any opened bags on lounge or floor for fear she might leave with a skinky stowaway ) , I was feeding the crickets and she knows the sound of my bugblaster vacuum. Had a feed of cricket so do Jr who came out too.
K

Original Poster
Cheakie and Jr hung about inside all afternoon.
Cheakie patiently waiting for her free bugs , while Jr watches on from above. 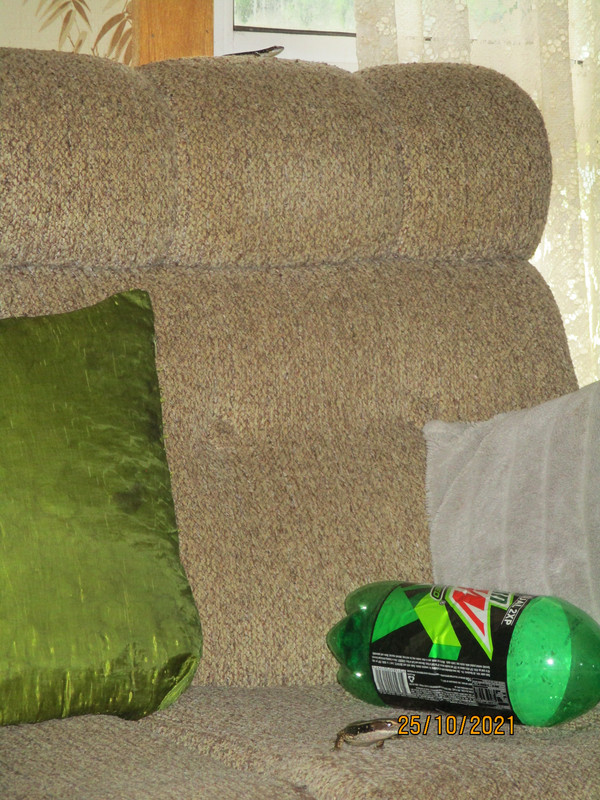 Cheakie has very little hesitation in taking food from my finger tips , off my open up turned hand , and is now very comfortable with me , spent a good part of the day sitting right next to me on the lounge , and has even been using my hand and foot and thigh as a heatpad. 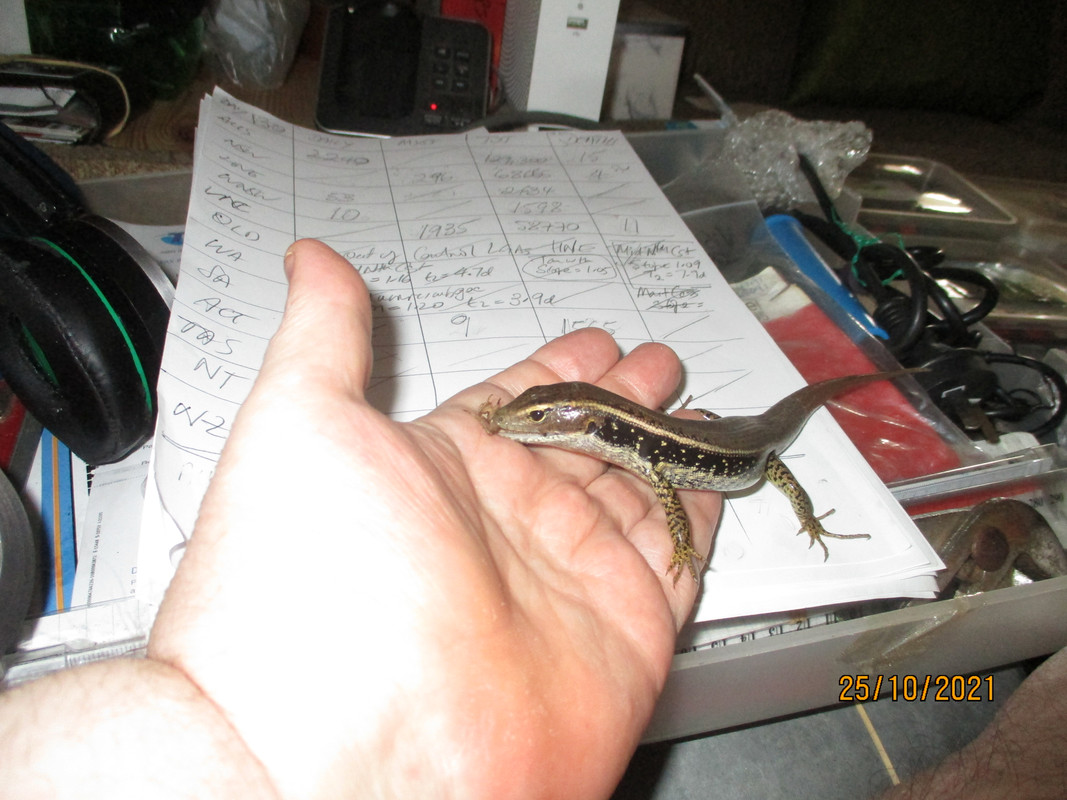 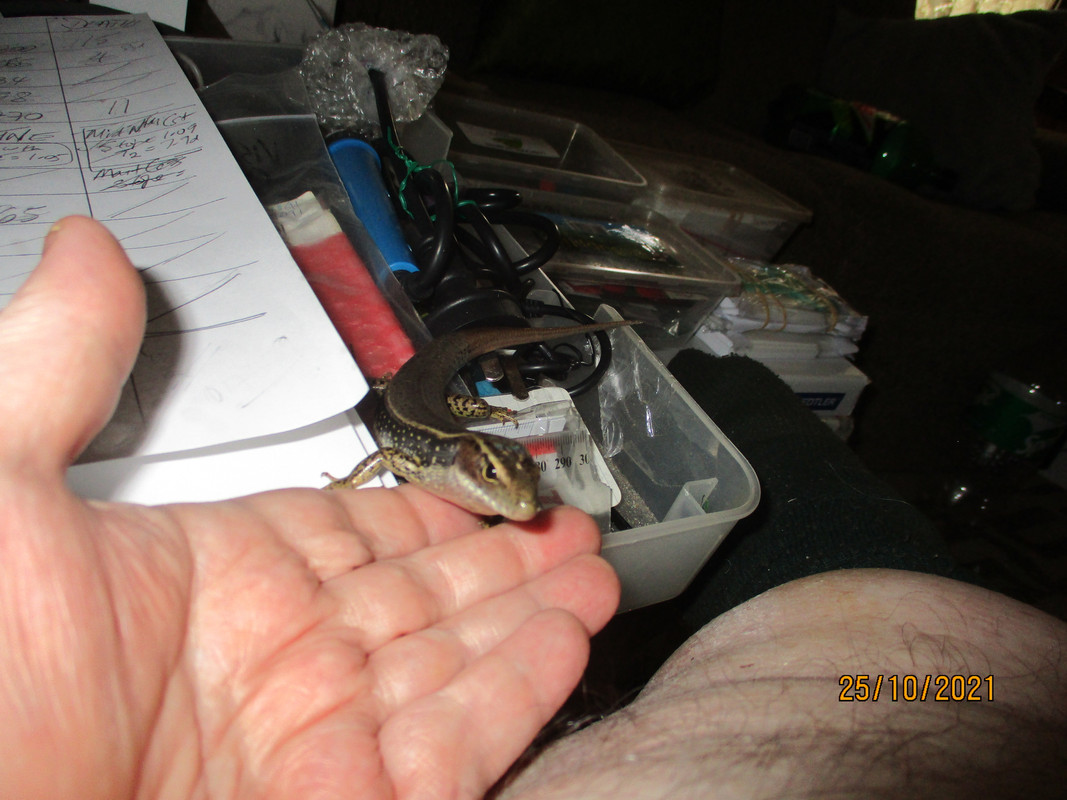 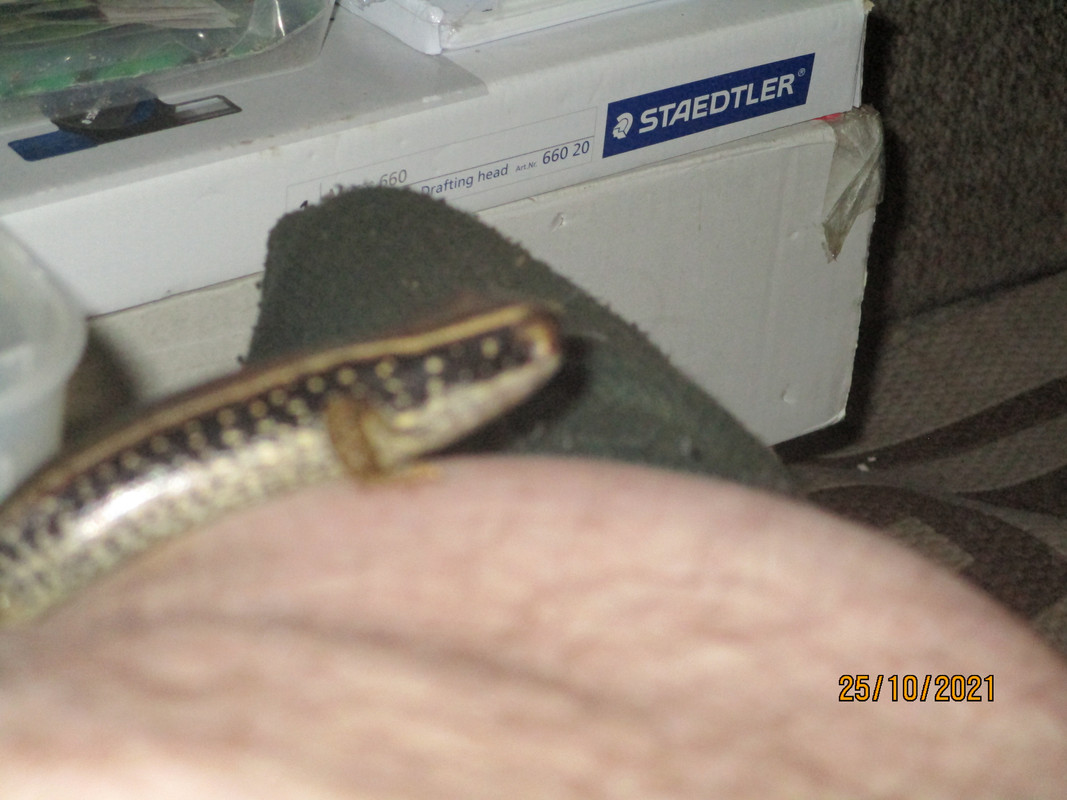 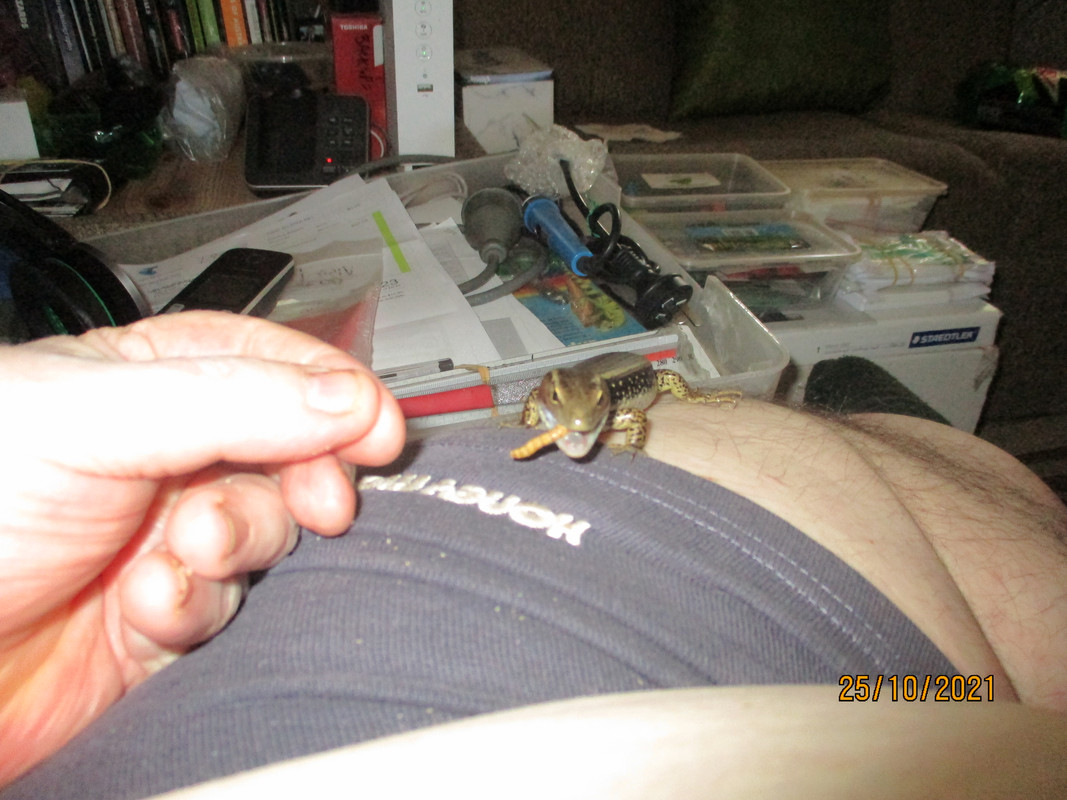 Staff member
Moderator
Looks like you were able to get some pretty good shots of them! It looks like they're enjoying their time in the house and free snacks =)
K

Original Poster
4 water skinks in residence ( 3 in lounge room = Cheakie + Jr + another very pregnant girl ) and juvenile in the kitchen ( hanging out under the big fridge ( very shy - only seen it's head peaking out at us at breakfast ) and yes it is indeed 4 as we saw all 4 at the same time. 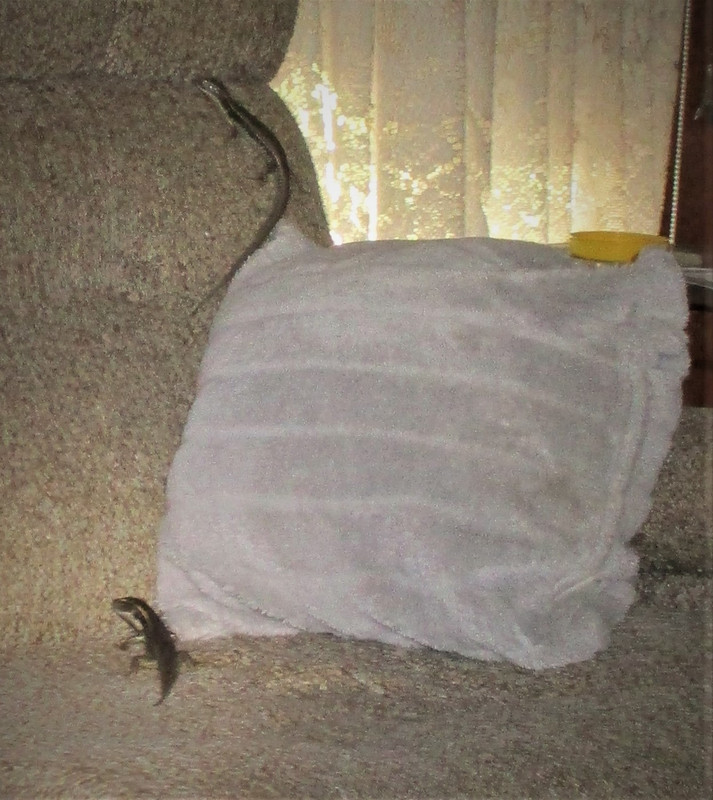 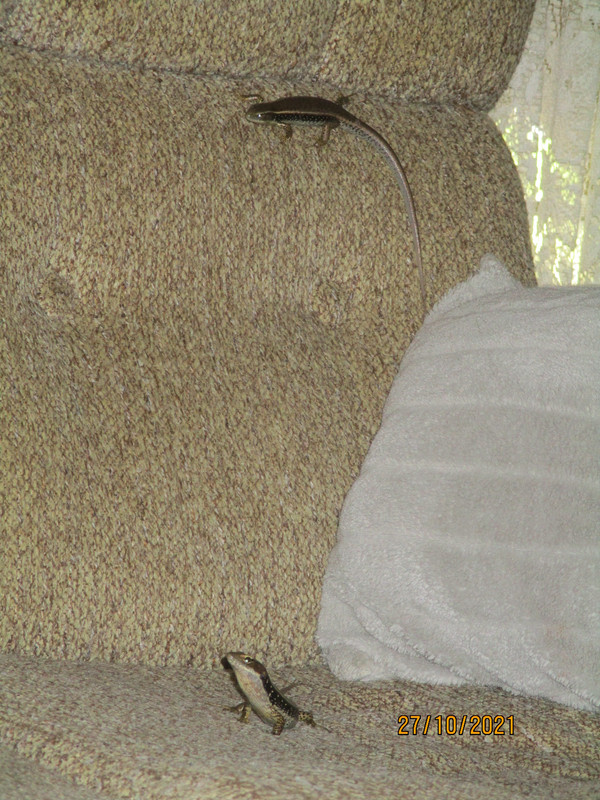 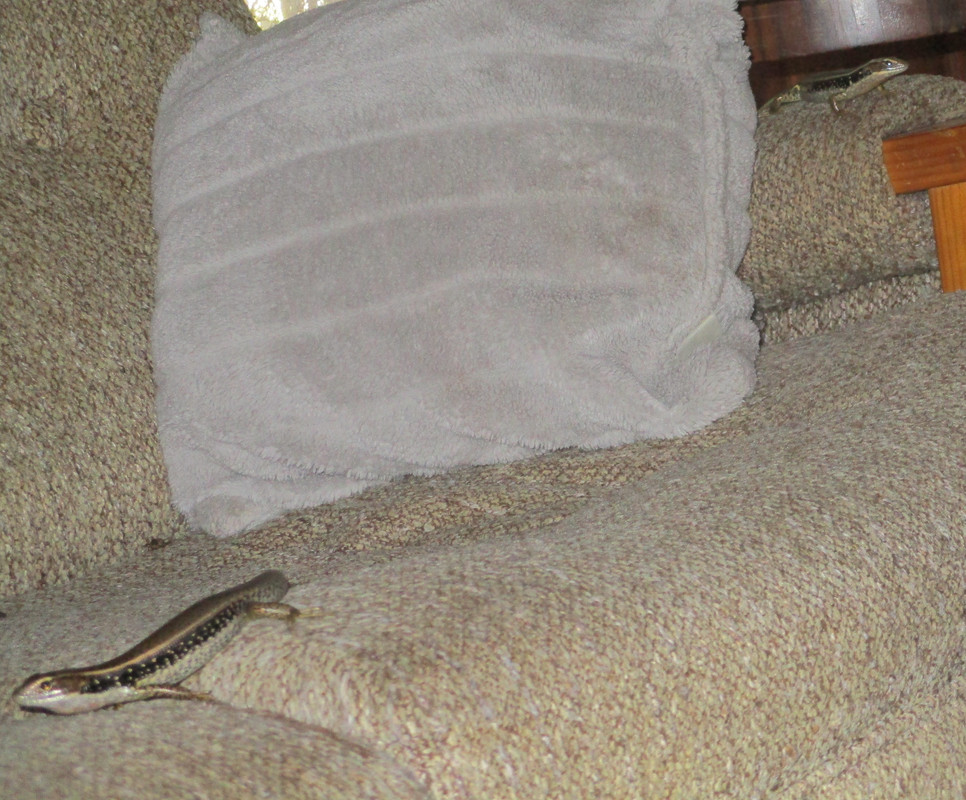 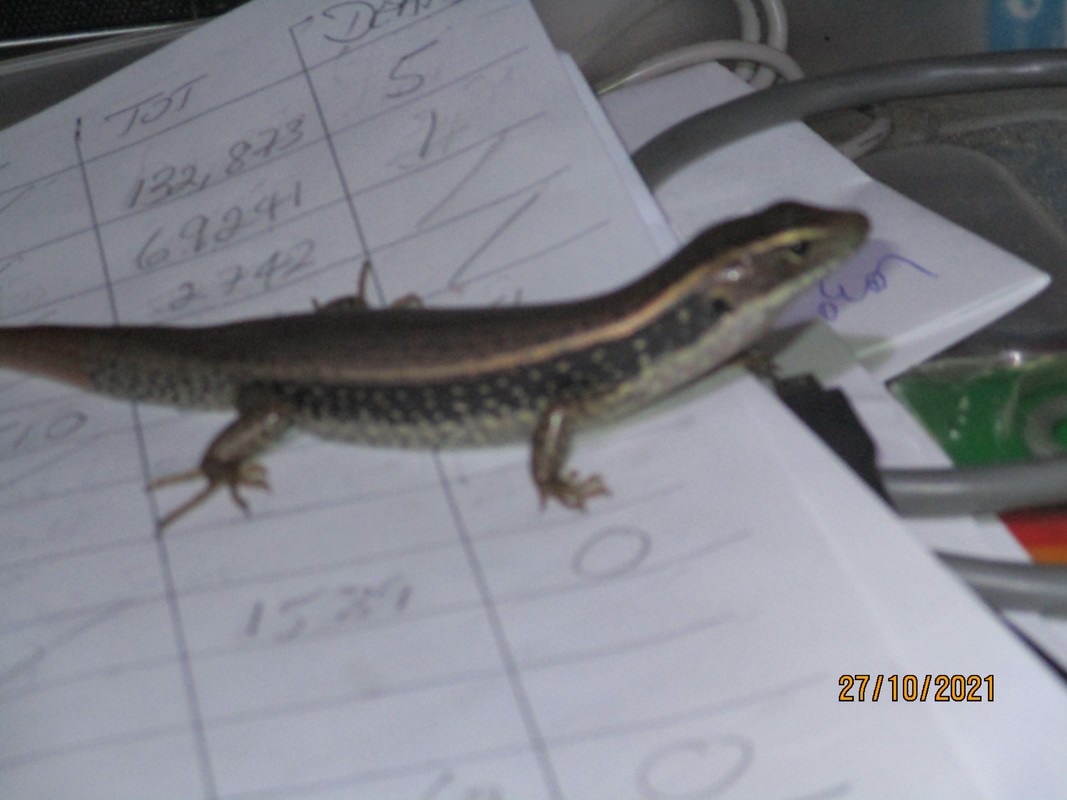 Cheakie hanging out next to me. 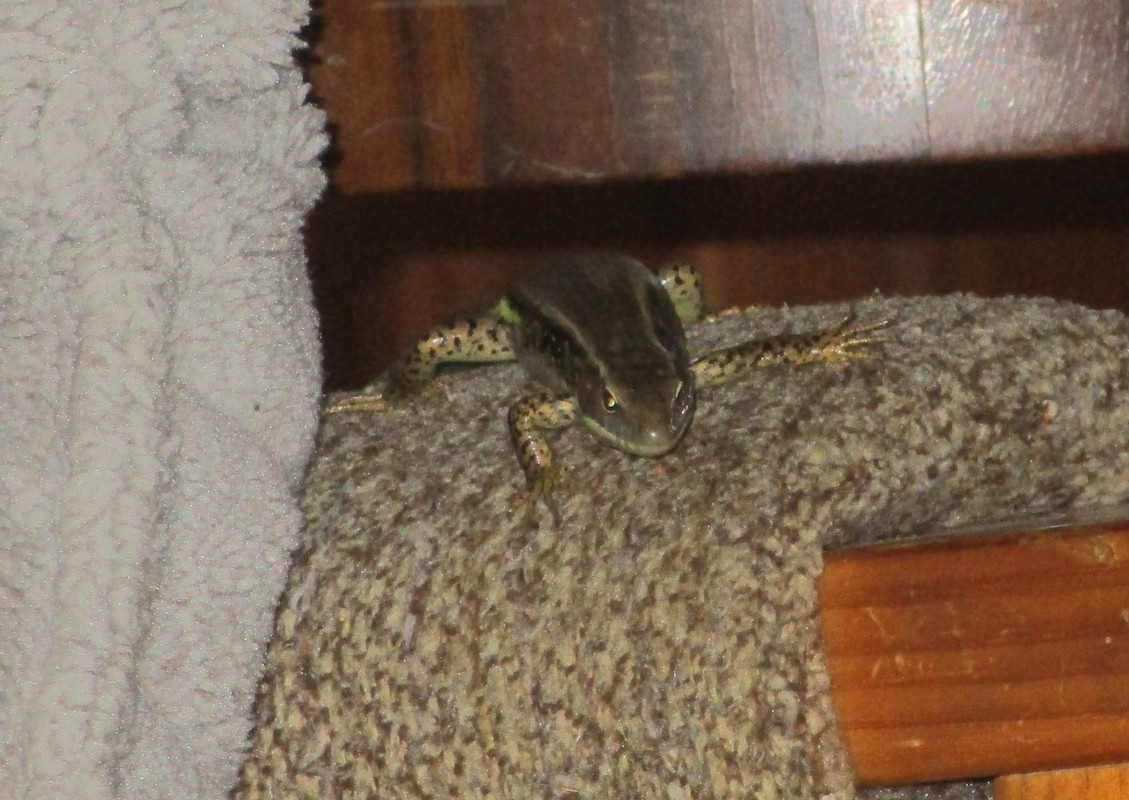 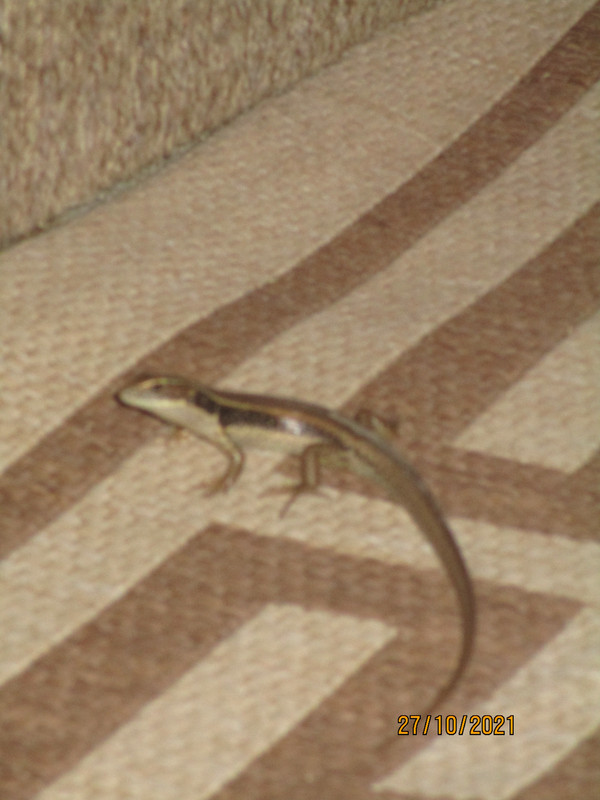 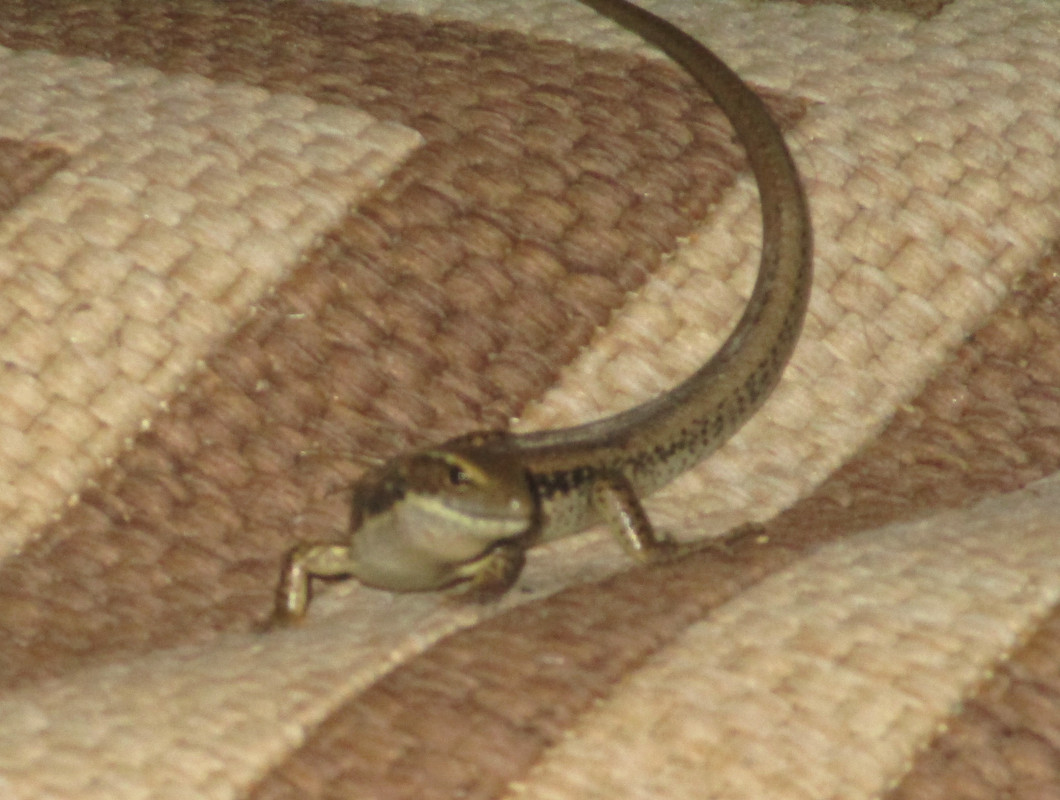 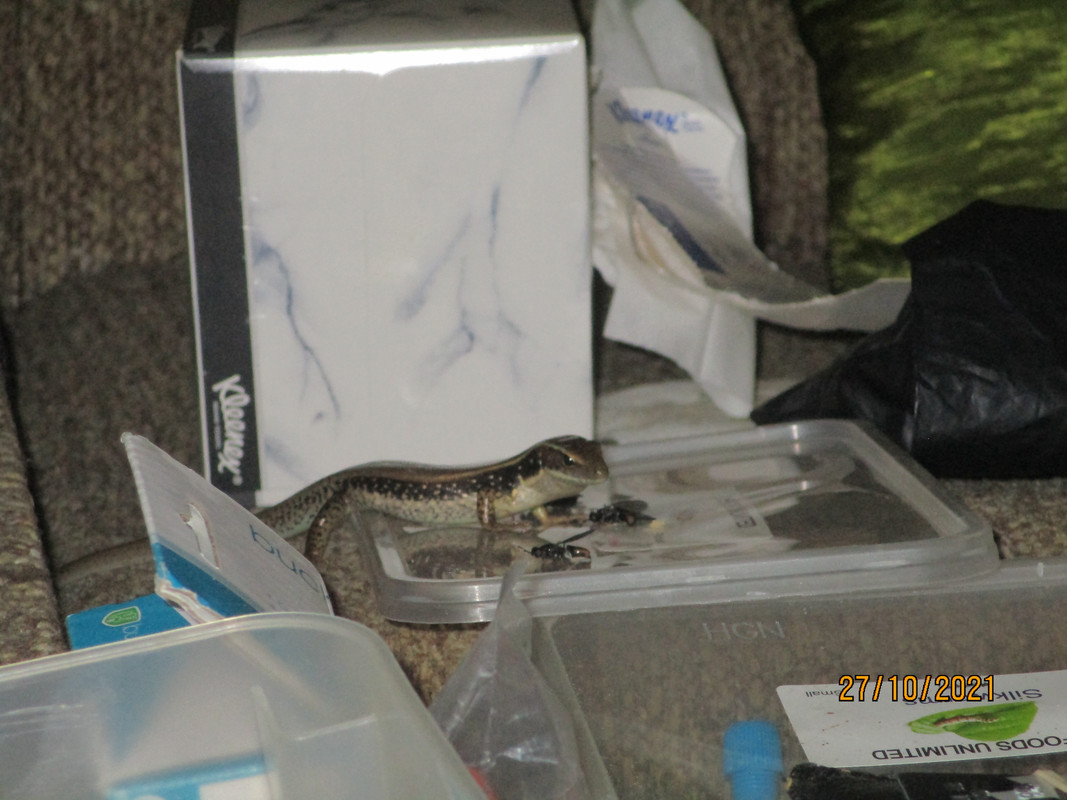 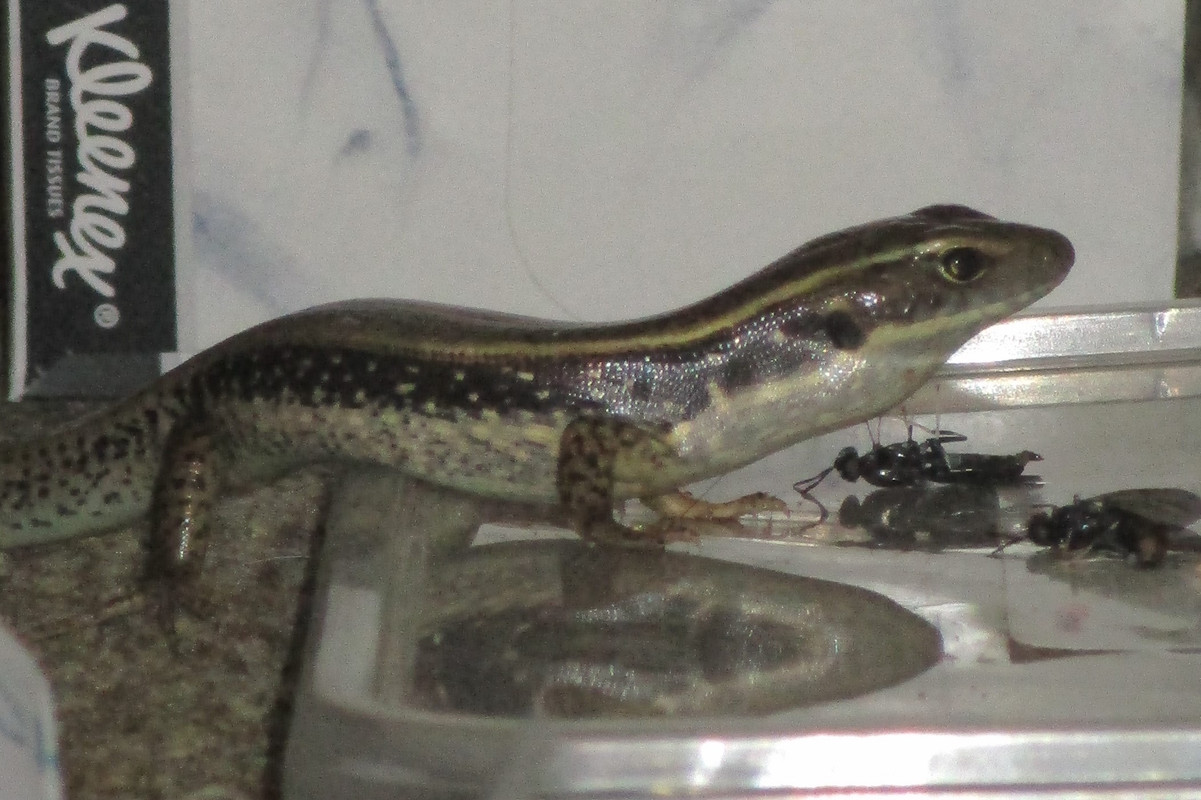 Staff member
Moderator
What type of flies are those? They look like huge black soldier flies, but the size may be just due to camera angle.
K

CooperDragon said:
What type of flies are those? They look like huge black soldier flies, but the size may be just due to camera angle.
Click to expand...

Yep - black soldier flies .... my beardies love them too.

George and Mildred my two pet eastern bluetongues only eat them if mixed with a fav food.,
K

Original Poster
Junior saying "hi" to my wife this afternoon. 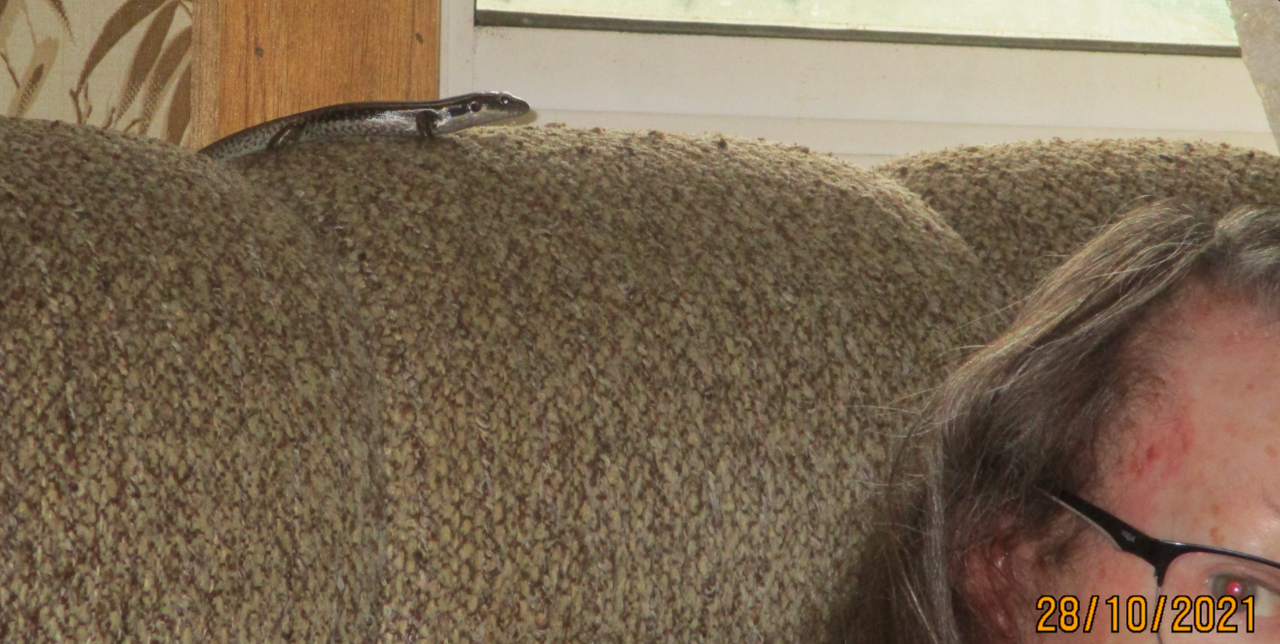 Original Poster
Came close to coaxing Cheakie's friend to take a mealworm from my hand today, she came up to my hand , about 2" away but wasn't hungry enough having already filled up on black soldier flies, mealworms and mealworm pupae.
Spent all afternoon exploring the house and visiting my wife in the study and me in the lounge room often .

Jr is really cheaky , spent ages on the top of the lounge while my wife was having long phone chat with her brother ( who lives in the upper Hunter , about 4 hrs drive ), I think the little skink thought she was talking to it and was puzzled by the voice from the invisible person on the other end of the "conference call"..
Jr is VERY GOOD ON THE TOOTH, loves blacksoldier flies , mealworms, crickets and mealworm beatles. 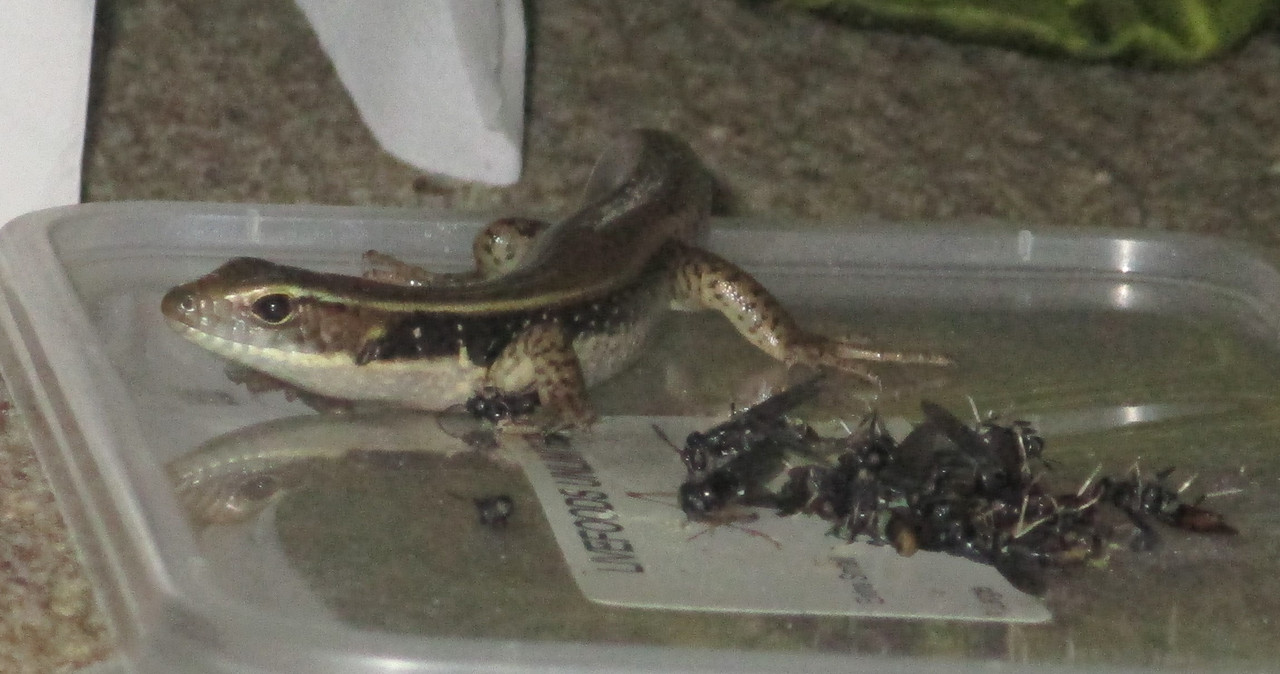 No sign of Cheakie inside , wife spotted her outside on the front patio basking on the steps at 5pm when she watered the herb tower.
Last edited: Oct 29, 2021