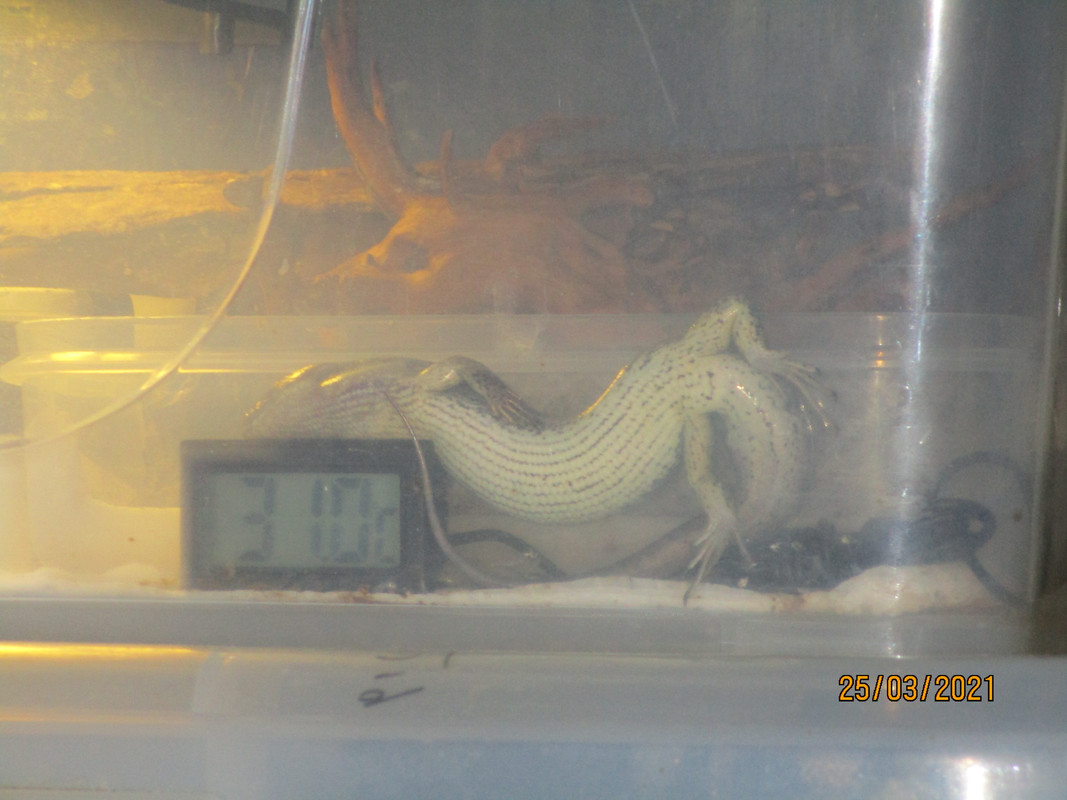 ta
Afternoon siesta , sound asleep . She thinks she's comfy and her belly is nice and cool and really relaxed ( asleep ) til cooking smells from the airfryer woke her up .

She really cracks me up the contorted positions she gets into and sleep in.

Staff member
My back hurts just looking at that photo :lol:
K

One of her classic sleeping positions …. very skinky.

Lucky, you’ll probably not have to worry about mosquitoes and roaches lol. I wish the spiders living in my house were more vicious when it comes to hunting mosquitoes, they bite me in my sleep during the summer.
K

She demanded out-time and once out was being a very good girl last night , and I discovered today she's shed overnight. 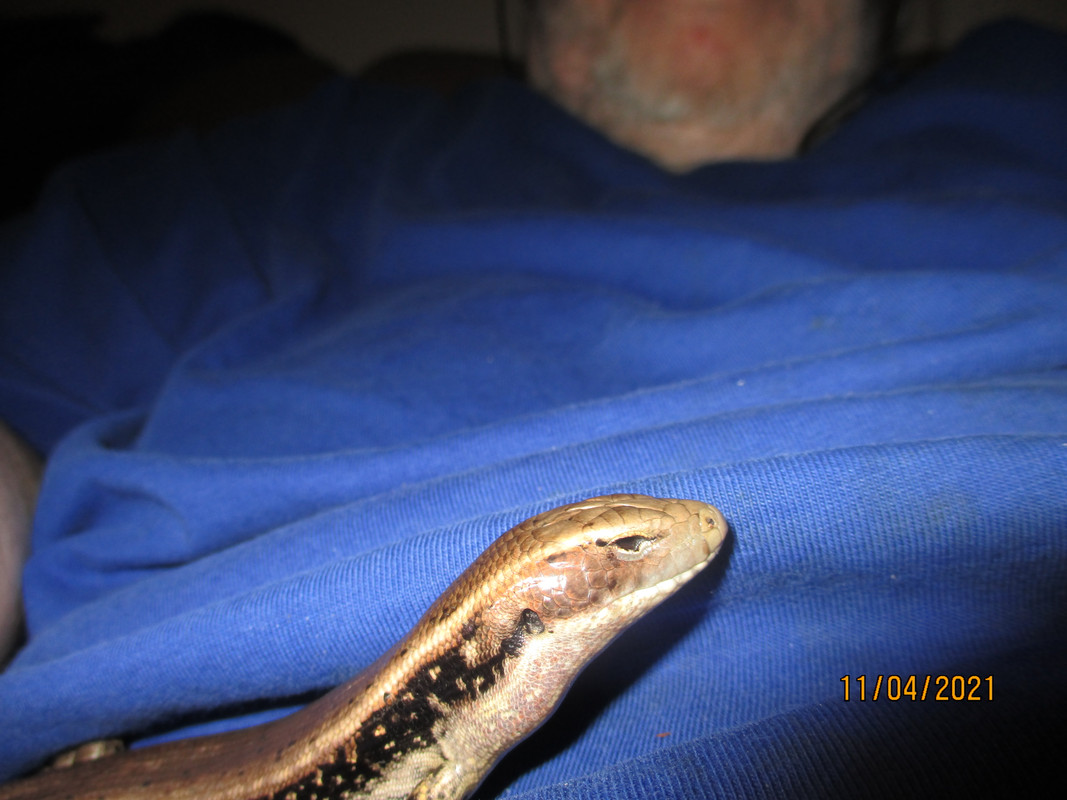 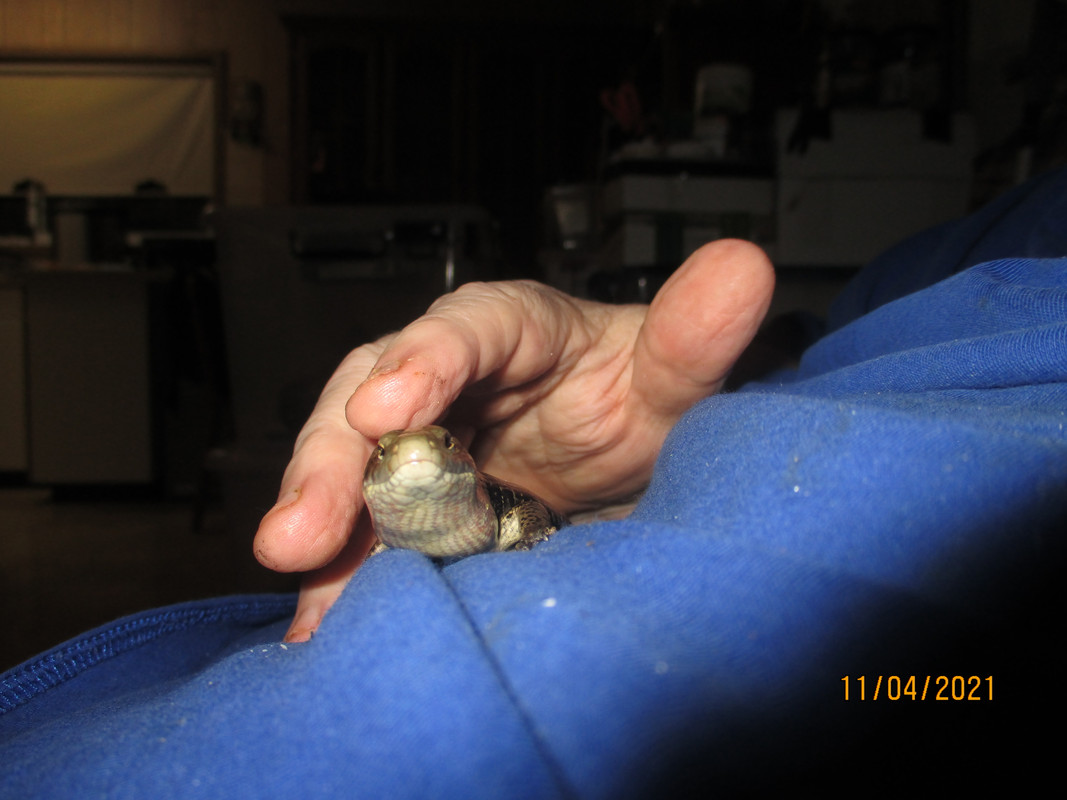 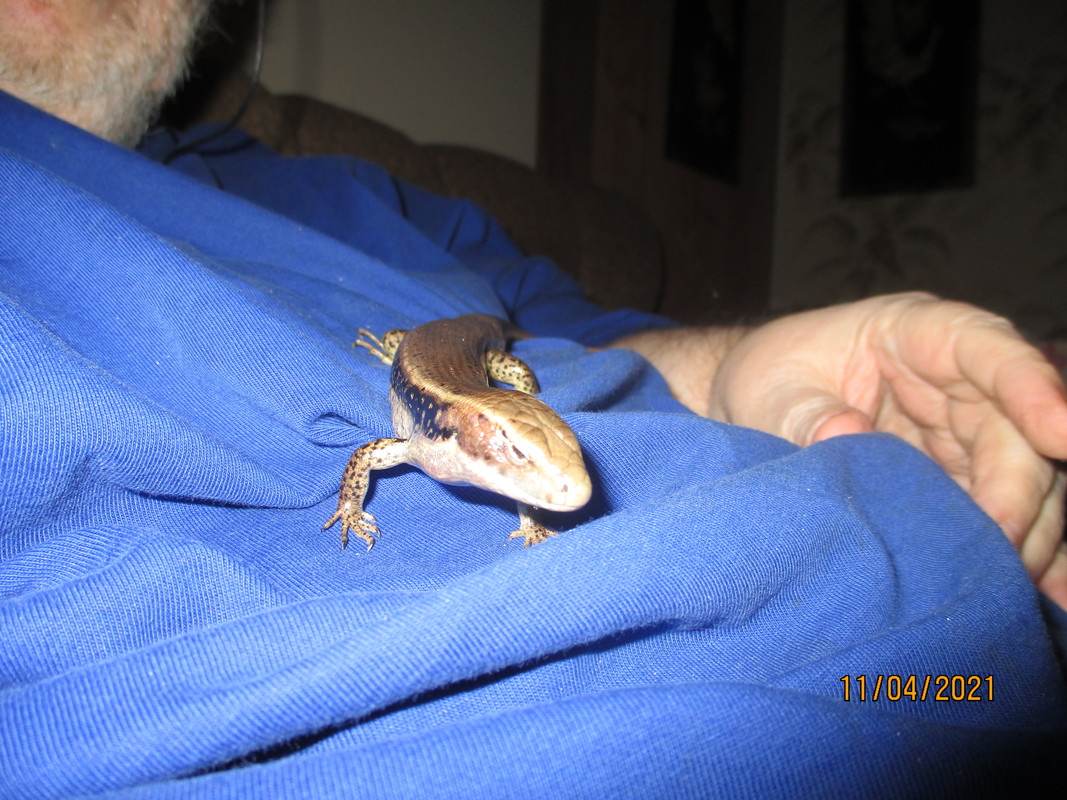 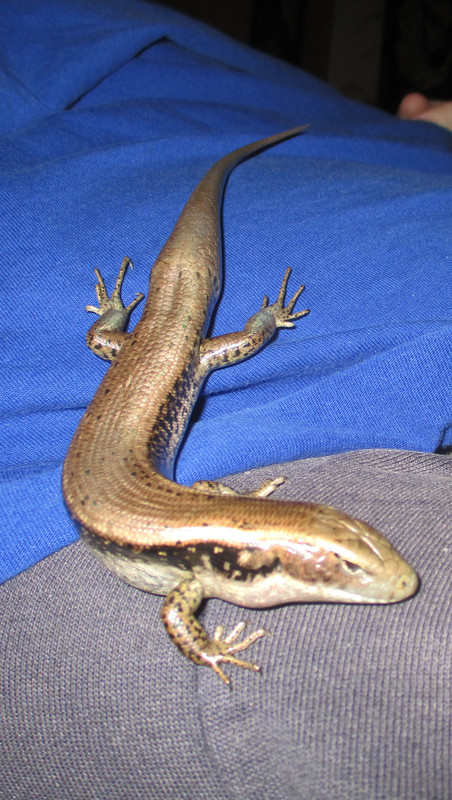 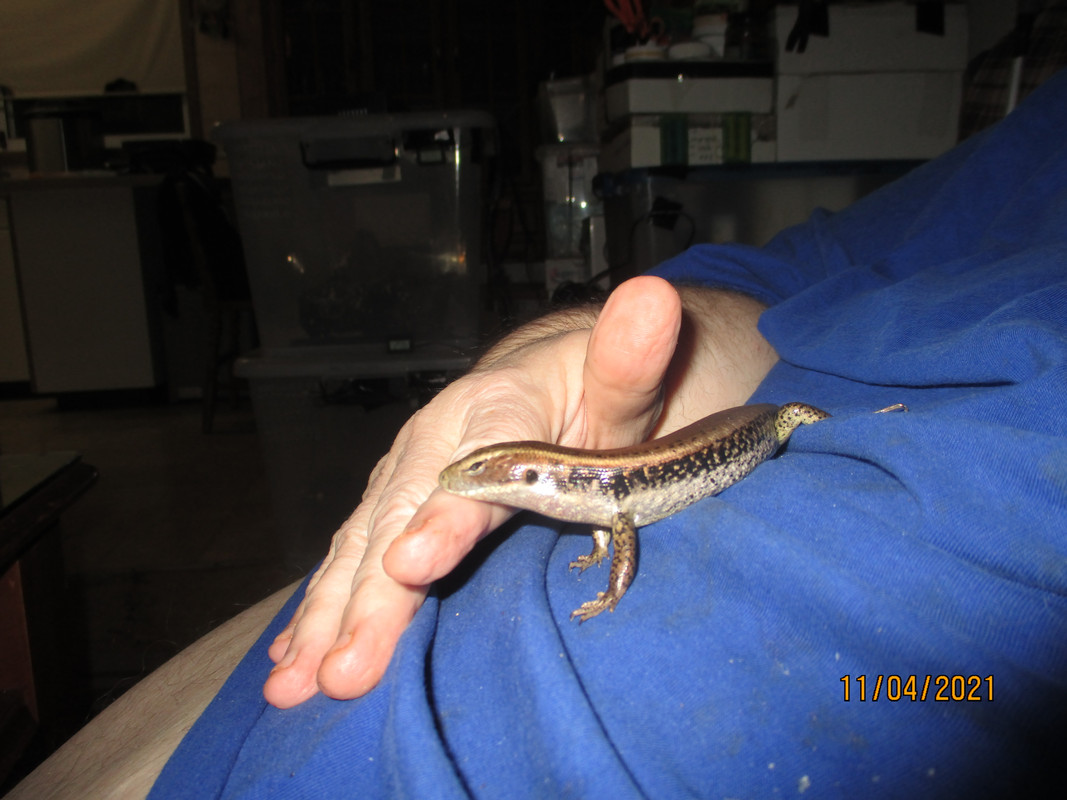 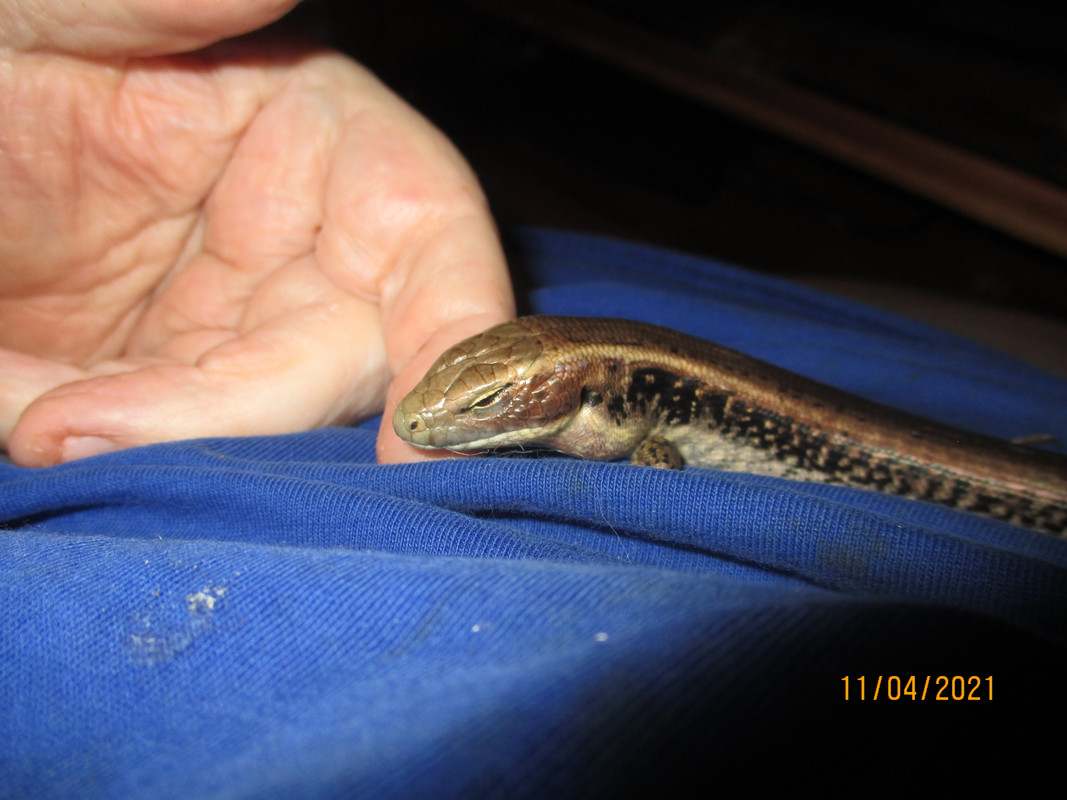 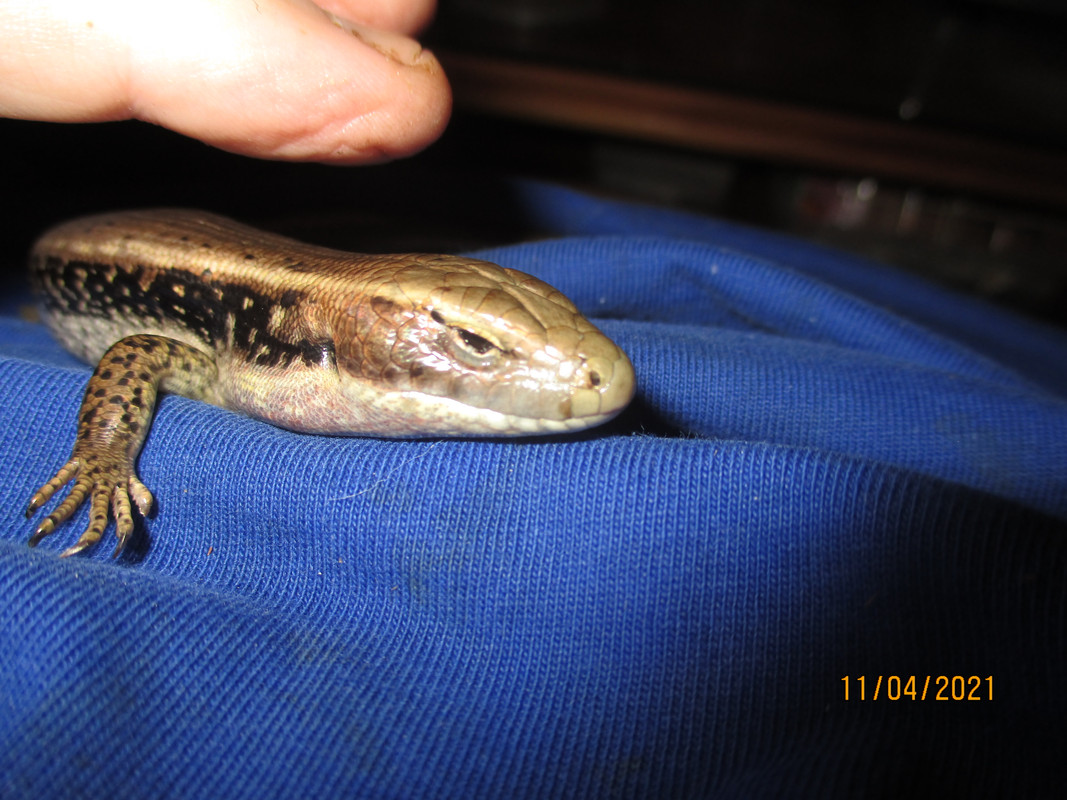 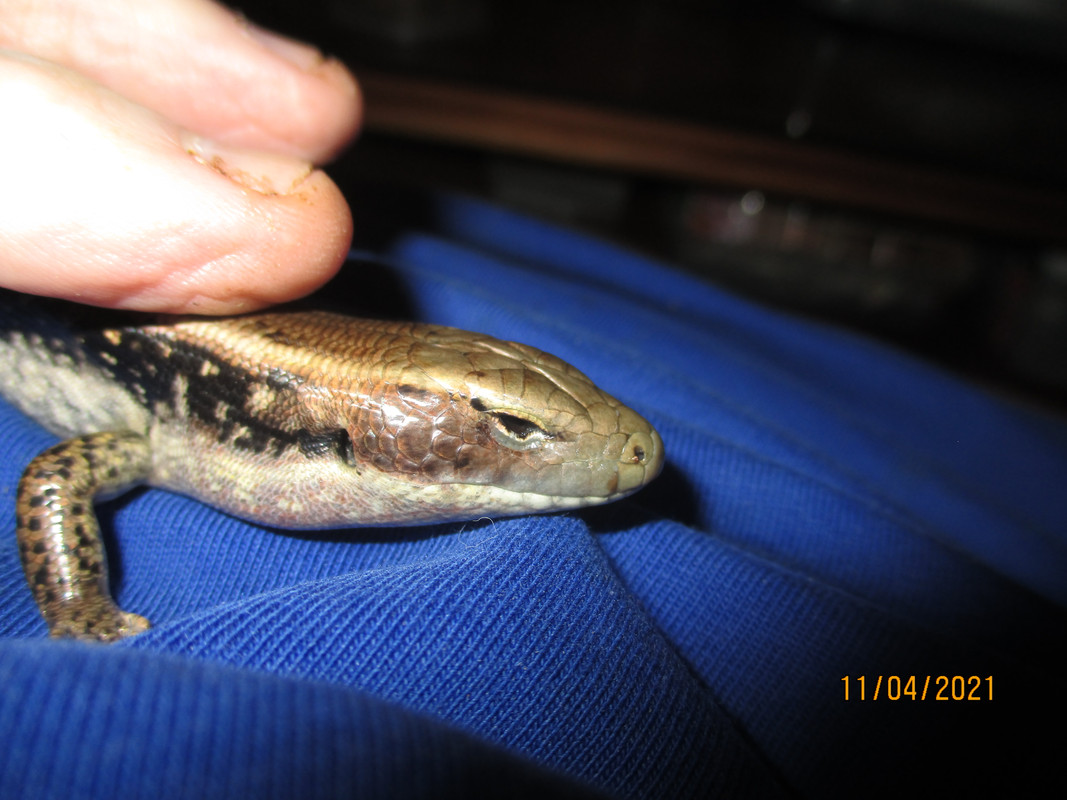 Eventually curled up in my open hand and flaked out . 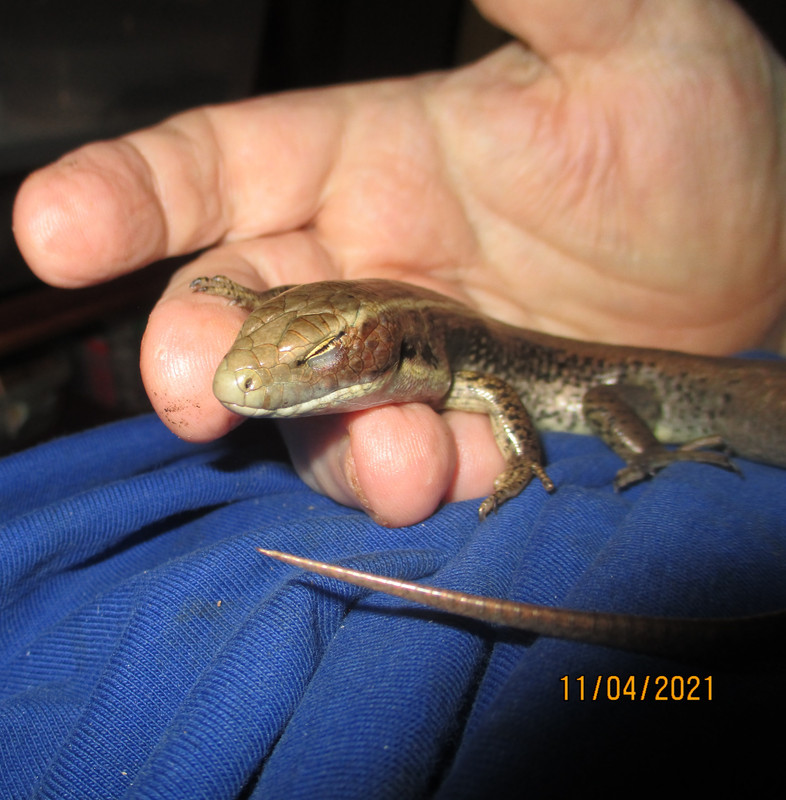 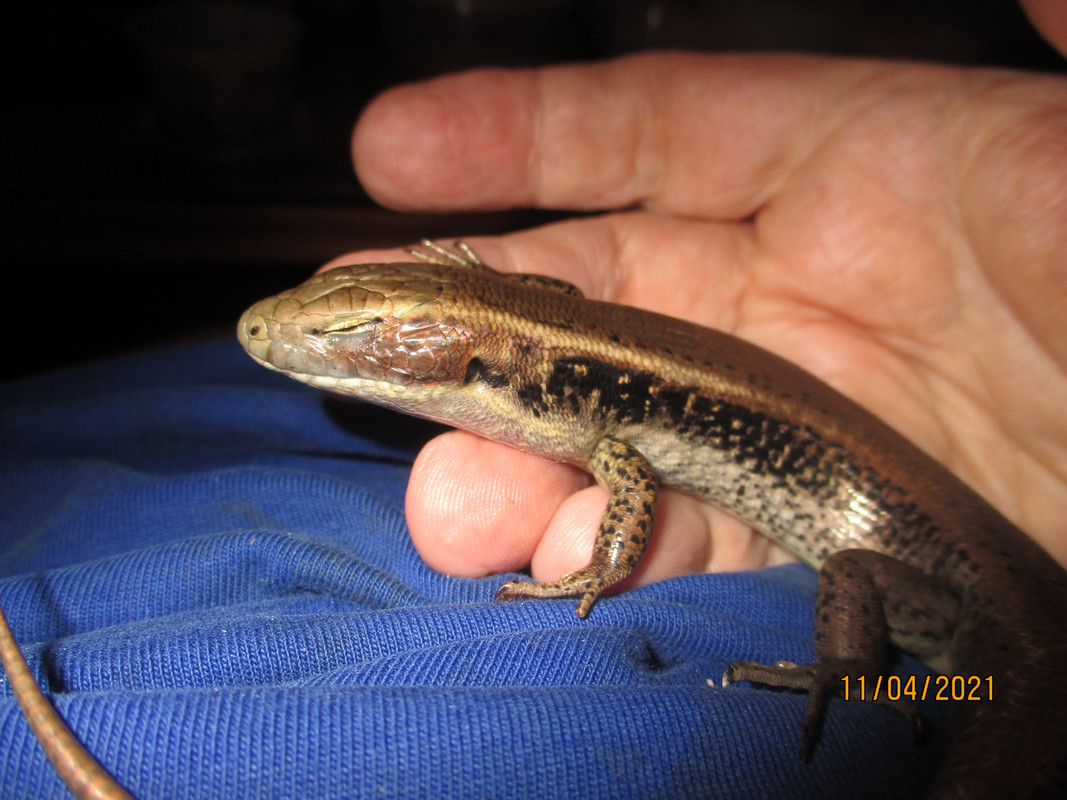 Moments like this with a rescued , nursed back to health injured wild skink who shows genuine affection and trust are VERY SPECIAL.

Staff member
I'm glad you've been able to help her out. She sure seems to appreciate it =)
K

Original Poster
22 August
Cheakie ( I was able to confirm by his throat flank spot constellation he is indeed Cheakie ) and he still has his original issue tail too ), graced us with a long visit on the top of lounge this afternoon .

He's a very big boy now ! ( I estimate about 13" inches TTN ).
Was enjoying the warm air blowing from our aircon .

And he immediately captured Fluffy's attention for quite awhile and they were head nodding at each other for over an hour before Fluffy lost interest in him.
Stirred up Cleo too who spotting him instantly in the highest position and proceeded to arm wave and do the slow head nods at him.
The bluetongues paid zero attention to him as did Caesar.

Headnodding at Fluffy , bold as brass , not the least bit concerned about my wife walking past . 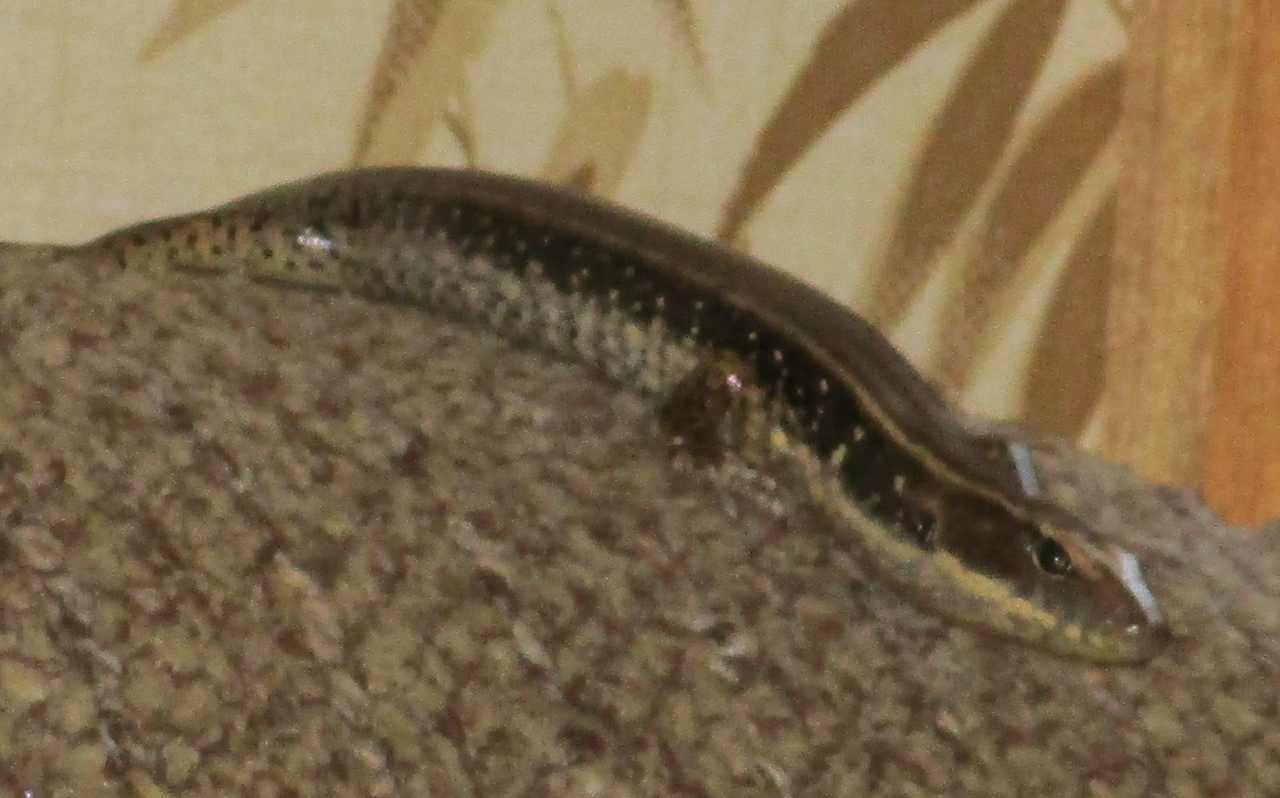 Then the sun started shining in through the window and he lost interest in us, and Fluffy and Cleo.

Half an hr of basking and he was gone , only to return at dinner time ( people cooking stake smells are irresistible to my pet and resident wild water skinks .

Tried to tempt him with some mealworm pupae , beetles and lavae but I think he's been hunting down house roaches and rogue crickets, maybe monstering the two resident G.Dubia geckos to nick insects from them while they are "tenderising them" ( yes they are back , at least two as they churp at each from different ends of the house and respond to each other's calls.
K

Original Poster
Cheakie had the beardies sturred up today , showed up about breakfast , and back again at lunchtime , brought a friend with him ( yep two skinky visitors sharing the top of the lounge under the aircon and near the sunny west window ).

His friend is a bit shy , but Cheakie wasn't the least bit worried about my wife going in and out the front door carrying home delivered grocery shop inside , watched her every intently and tracked her .

Here is Cheakie in all his glory ( full length ) .... he's quite the camera glutton , seems to be a real little poser.

Little bit or the thin end of his tail has regenerated ( so not entirely an original issue skink tail ) but still a very nice long wriggly tail nonetheless.

All the guest water skinks have loved this positioning on the top of the lounge - must be skinky comfy ...

Offered some mealworms in a peanut butter butter lid, he could see them, but not interested. Just here for the warmth and a visit .

The little geckos in the kitchen , study and master bedroom have been in good voice - churping at us most afternoons and sometimes at night. Think one lives under the queensize bed as it sometimes churps when we get out of bed .
K

Original Poster
Cheakie has been in residence and occupying the top of the lounge's headrest ( under the aircon ) 3 days running, and then heads to the sunny patch when the blind is up .
K

Original Poster
Cheakie has been keeping company with me all day .
I think Cheakie might be pregnant as I've noticed she is quite plump ....


I thought it would be worth seeing if "she" .... was hungry so I disabled a couple of med crickets and left them where she can see then on the lounge on a piece of paper towel. Didn't take long for Cheakie to pluck up the courage to crawl down and eat them. And VERY BIG .... cheakie accepted 2 crickets from my open hand this afternoon as well.

I think she has decided she likes me and trusts me.

She's not scared by us walking around , in and out the front door ( only a few feet away from her fav stop ), and was very curious about my wife when she went outside to use the garden hose and shower/mist nozzle to water the berry plants and tower of herbs on the front patio , crawled over to watch her through the window.
K

Original Poster
Cheakie really likes it inside with us.

Took up her station on the top of the lounge headrest at 10am , just after we had brekky ... stayed their thermoregulating and following the sunlight til well past dust , only disappearing at about 7pm ( she's not so keen on the sound of savory mince being fried and sizzling in the frypan ).

Loves crickets , not so keen on mealworm lavae and pupae . Took another cricket from my hand this afternoon , I'm restricting her to no more 2 medium crickets from us per day , this way she'll still be hungry enough to catch and eat roaches ,spiders and flies that come inside.

Nice to have a resident "wild" friendly water skink inside again.

Staff member
It's good that she's enjoying time inside with you. Do you think she is inside more due to seasonal changes in order to cool off? It must be starting to warm up a bit now over your way.
K

Original Poster
Been a cold wet windy September this year..... Only had the aircon running in cooling mode 1 day so far this September..... been quite cool even if the suns been out ( lots of wind , strong sea breezes ).

So I think she's enjoying the luxuries afforded to her by our having the aircon running in reverse cycle ( all be economy mode ) set to hold the house at 24 - 26 degC .
The free food and safety help too.

Most Septembers we have hot weather here most days. Not this year.
K

Original Poster
Discovered we have 3 wild skinky house guests, Cheakie and 2 others, one very shy adult female in the lounge room , hangs out with Cheakie under behind the lounge , and one juvenile who I just saw dash under the laundry door across the hallway floor into the guest bedroom .

I guess Cheakie has been spreading the word , "come on inside with me , nice hoomen inside who wont chance or try to eat you , it's nice and warm inside and there is plenty of food in there ".

M
Meet My Beardie "Thibodaux". We both are new here.