I have a 13 year old Mali Uromastyx that came down with an upper respiratory infection for over a month now. The first week I noticed he was mouth breathing 1-2 times a day and I thought it was because he was regulating his heat. The second to third week, I noticed he would open mouth breath after eating, which was when I started to get concerned. I booked an appointment the next day and did an x-ray to find his left lung was grayish, meaning he had fluids in it. The vet prescribed me Baytril to be given at 0.02mL every day for 2 weeks and then to come back for a follow-up appointment.

After the first week of Baytril treatment, his condition declined sharply to the point he was making clicking noises, mouth breathing frequently, and started choking on his food. I had to use tweezers to pull out pieces of hibiscus from his back throat, which is something I never want to do again. Right after this incident, I had to wait the next day to take him in for an emergency visit since reptile vets are very rare where I live. It was scary watching him breath every 20 seconds from his mouth while he was trying to sleep, and I was afraid he wasn't going to make it through the night.

The very next day I was able to take him in to a different vet to have them check up on him. They were concerned the concentration of Baytril entering his bloodstream wasn't sufficient enough and the possibility it may have no effect on him. They gave me a different antibiotic (Amikacin) that is to be administered via injection at 0.03 mL every 72 hours, some subcutaneous fluids with butterfly needles, and Meloxicam to administer if he's having inflammation issues.

After a week on the Amikacin, his health began to improve where he was no longer making clicking noises, choking on food, and mouth breathing occasionally instead of frequently. I went in for the follow-up appointment where they had me discontinue the Baytril treatment and told me to stay on course with the Amikacin for another two weeks. I'm a little more than a week into the Amikacin treatment with about 6 days left, but he's still mouth breathing 1-2 times an hour and after every bite.

Should I take him back to the vet for more options or give him time to recover? The whole experience has been draining both emotionally and financially. I know for sure if I bring him in again for an emergency visit, we will need to do a second x-ray along with a culture sample, which will be $630 minimum. It's hard to tell if he's improving from this upper respiratory infection. Is it possible he may have something stuck down his lungs and it's not bacteria related? I'm also looking into a nebulizer, but I have no clue how to use one and which type of medicine to administer to him. If I did go that route, I would definitely need advice from a vet or professional. I just want my baby to get over his upper respiratory infection

This is the information I gave my vet: 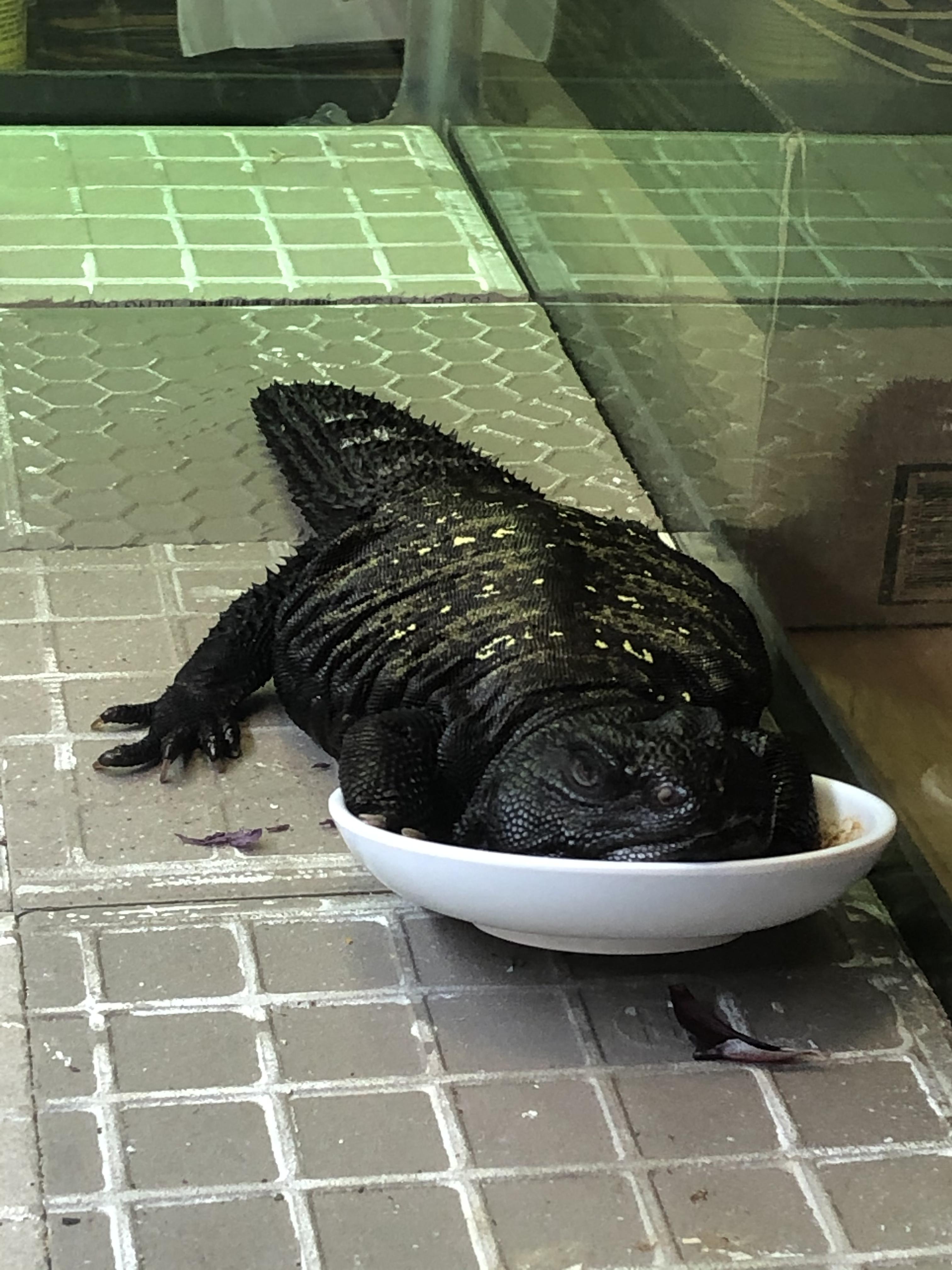 Enclosure: 18 inches x 36 inches x 13 inches (originally 17 inches but boxes used to raise height by 4 inches so that he's closer to his bulbs)
Light Sources: 1 Powersun UV 160W, 1 Powersun UV 100W, 1 Ceramic Heater, 1 Reptisun 10.0 UVB T5 HO bulb, 1 Exo Terra Reptile UVB 150. Left on for 12 hours a day.
Heat Gradient: 80 degrees F (coolest) to 128 degrees F (hottest)
Humidity: 30-40% (unknown as the humidity gauge in the cage seems to be very old). I do try to do my best to have this as low as possible, but this is the best I can do in California weather and he seems to have been fine with it for the 13 years I owned him. Absolutely no standing water in the cage.
Substrate: Brick tile at first, but replaced with T-shirts since the vet said it may be damaging his nails. Enclosure is cleaned once every 2 weeks. 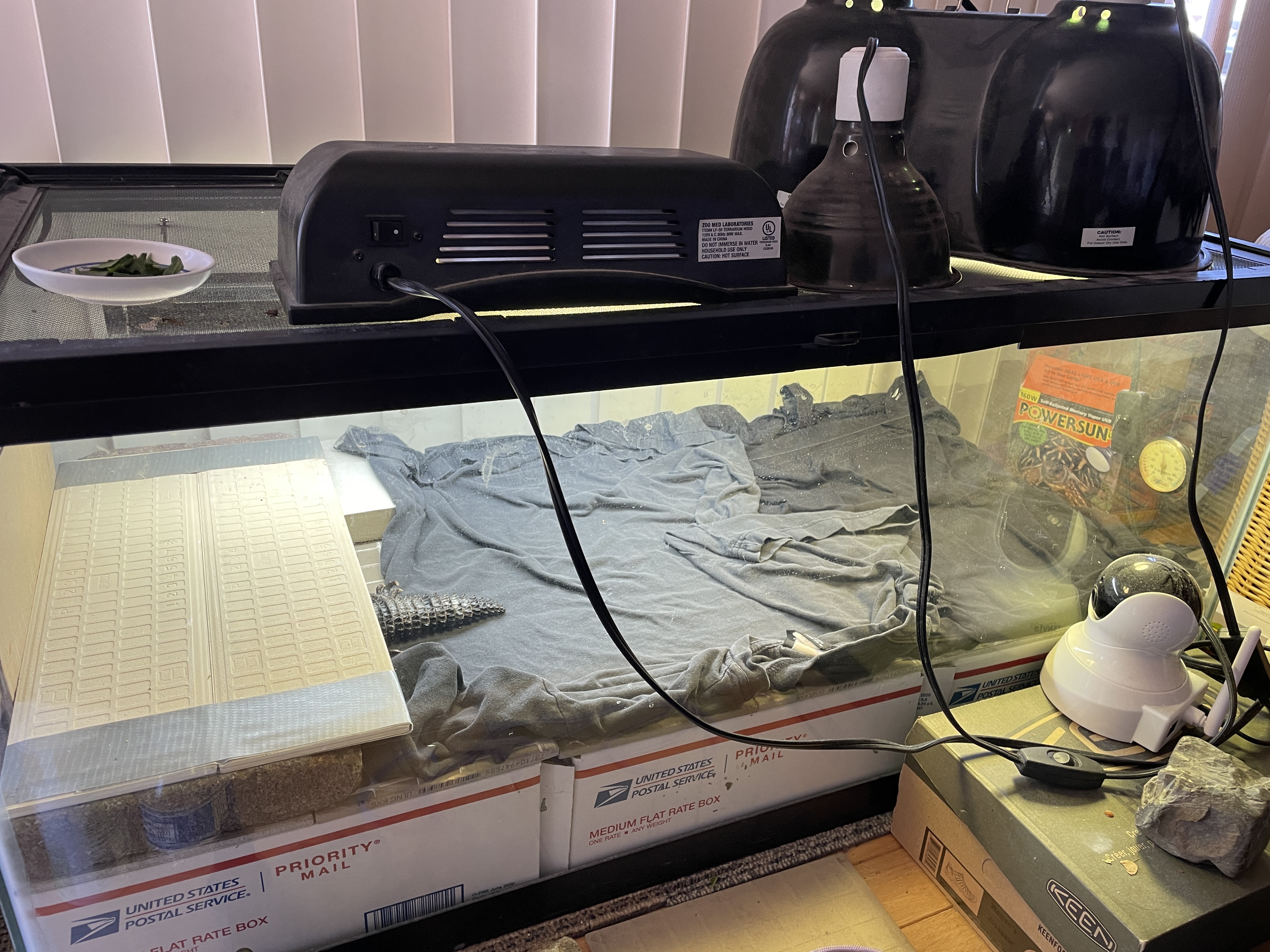 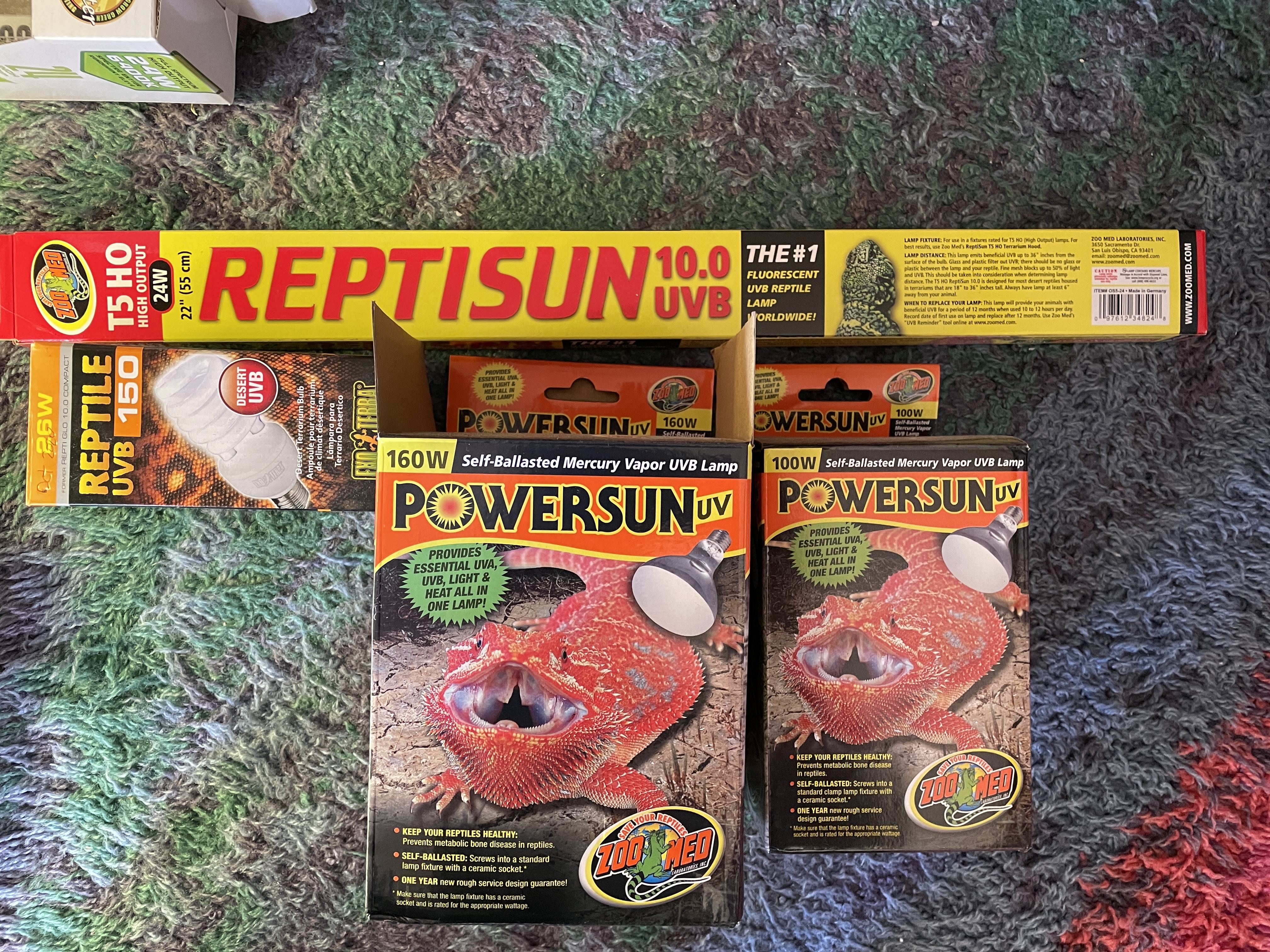 Known Health Issues:
- Fused spine and signs of MBD from an early age. Cannot jump and has poor flexibility. If flipped on his back, he cannot right himself.
- Spine injury from an accident a year ago. Can no longer open cloaca by himself. Every week we need to open it for him using sterile gel and a cotton swab so that he can expel urate and feces. This has been a thing for almost a year now, so he seems to have gotten used to this new lifestyle.
- Signs of kidney disease. This was diagnosed by the vet 4 years ago and may have been due to his poor diet of flowers and lentil beans. Of all the lizards I've owned, he is one of the pickiest eaters that's been known to go on long hunger strikes unless he gets what he wants.
- Shedding issues with his tail. His tail has the hardest time shedding and some sections seem to have multiple layers from older sheds. It's been very difficult to remove these and he's very sensitive around the lower sections.

Other Information: I do not own any other pets besides Wobbles. He gets about 30 minutes to 1 hour of natural sunlight outside a day (with supervision). I handle him every day for a few minutes and return him to his cage promptly.

Let me know if you need more information or if I should get into specifics.
A

Original Poster
Just an update on the situation. I took him in to the vet yesterday to get a culture, x-ray, and blood work. During the culture, they had to sedate him and something internally ended up rupturing. Wobbles passed away.

Staff member
Moderator
I am so sorry to hear that. He was an absolute beauty of a Uro. How horrible. My condolences.

Claudiusx":17zbd3ug said:
I am so sorry to hear that. He was an absolute beauty of a Uro. How horrible. My condolences.

Thank you so much. The only upside is he passed away while he was sedated. Today was the longest day of my life because the vet said everything shut down except his heart and his chances of recovering were nonexistent. We had to wait until his heart stopped giving a beat so she can pronounce him dead and I can come in to pick up his body. I had to wait 6 hours for that call and it was a mixture of strong emotions to digest. It takes an hour to drive there, so it was a 2 hour trip to collect his body and immediately bury him when I got home at 9pm. He was my best friend and life long companion. I don't even think any of my human friends knew me for more than 13 years like Wobbles. Rest in peace.

Oh no, poor Wobbles. I am so sorry that you lost him. He was beautiful! I know how
difficult loss is, it is so devastating! My condolences.