I have been trying to research breeding, specifically pairing up different traits to produce specific outcomes. I do understand the basics like dominant, recessive, het ect. I know how to work out the simple % chances. What I'm having trouble finding is like a chart of what you could expect if you mix this with that (traits) I'm not so interested in colors.
The main thing I'm trying to pin down is ethics, i know two dominant leatherbacks for instance produce silkies but i don't know what other pairings should not be done. I have read that two visual trans shouldn't be paired but with no explanation why.
Does anyone have links to sights that explain in depth what is ok and what isn't? It's been insanely hard finding good discussions with science to back it up.
Any advice or links will be greatly appreciated.
Thanks

If youre looking for charts, you cant do much worse than the classic Punnett Square, just increase the size to account for whatever traits. Other than that, Im not very certain about reptile genetics, Id find a herpetologist forum, or ask around here

Thanks, i know how to work the charts, im more interested in what not to do then anything, i would hate to pair of a couple dragons and produce sickly or deformed offspring.
But i will try searching with those parameters and see what pops up.

Staff member
Moderator
As a general rule of thumb, the newer morphs should not be bred VisxVis. I've never seen an article about it really as its more so just about word of mouth and experience between breeders. Especially since it's a topic the average beardie owner doesn't much care to learn about.

And as you've probably heard, TransxTrans used to be a big no no. I know some breeders who have done it successfully but there really is no point to doing so. VisxHet is always going to be a safer pairing.

The reason a lot of newer breeders or fly by night breeders don't get recommended here is because of their breeding practices. Established breeders have taken the time to create a breeding program and have dragons that have been proven out as het for a trait, and therefor can reliably create desired morphs in a safe way. That takes time, and a lot of trial and error. Most new breeders have not put in that time and effort, and typically are buying the visual morphs they think people want, and breeding those.

For instance, This dragon recently sold by phantom dragons: 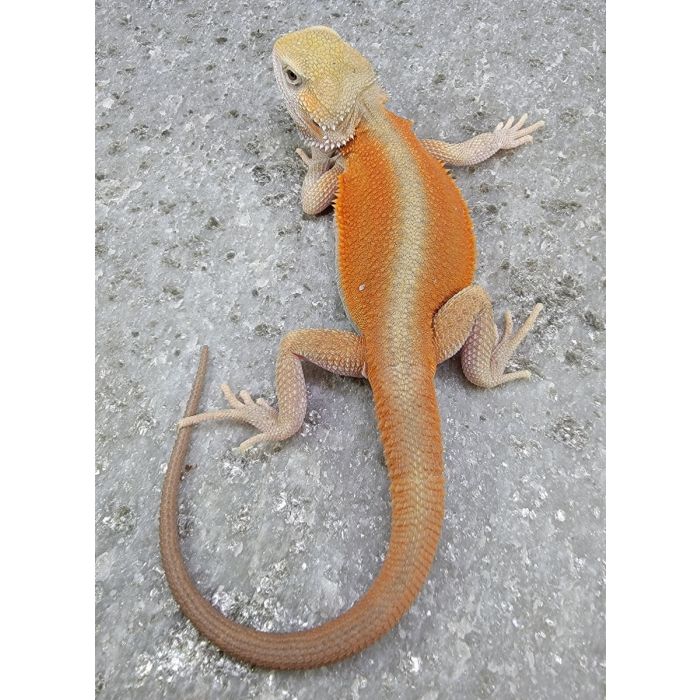 The parents of that dragon might surprise you. One side is a hypo, and the other is a "normal" (visually speaking). The hypo is het for trans/wits and the other half is het trans/hypo/wits.
Because phantom took the time first to create dragons that were het for the traits they wanted, they are able to produce the dragons people want in a safer and arguably more humane way. And like I said, it takes time to breed Het dragons, and time to prove out that the dragon you've been working on is actually het for the trait(s) you want.

Sorry, that's kind of rambly. TLDR no resources I'm aware of, but industry standard is HetxHet or VisXHet is always better/safer.

Thank you brandon, that is more useful info than i have been able to find in a week of online searches. I don't know that i will try breeding, although i am kicking it around. I just find the subject fascinating, and when something like rockhounding or beardies capture my attention i try to learn everything i can. As a bonus the more we can learn, the more we can give back to a community we enjoy to!

Pancake151
you know that feeling when you want to change your profile picture, but like you don’t want to lose the good one you have? That’s me, right now
Thursday at 3:31 PM •••
S
samanthamae1432
HELP WITH MY BEARDIE EGGS DONT WANT THEM TO DIE
Monday at 11:09 AM •••