I thought I would start a page about JoJo. She is a 6 yr old beardie, that we adopted from my wife's best friend's grandson. She is 17" head to tail, and at last weighing, 470 grams.
He and his girlfriend moved in together, but the landlord would not allow pets. Having had to surrender my 3 beardie's when I relocated to NJ, ( we lived in a hotel) we were thrilled to get another one! After re-doing her enclosure, I opted for a larger one, with correct lighting. I used washed play sand, as that what a breeder friend has been using for over 25 years. before that I was hell bent on the crushed walnut shells. got rid of them after reading about them in this forum. JoJo is now a very active little lady, bouncing around all over, and enjoys coming out for snuggle time, especially with the wife, who absolutely adores her!
Am posting pic's of her and her enclosure, many which have been posted in other threads, but are here again to view!

Original Poster
Hi All,
(it's been a while)

Well, every time I go home on weekends, JoJo gets at least 2-3 dozen large crickets, dusted with vita-cal, and she hunts down every last one of them. If you see her tank pic's, when she see's me dumping in the crickets, she has leaped from her hammock to the sand to get at them.
still loves the freeze dried ones, give her greens every day, back to eating her orange/yellow peppers and loves fresh green beans, chopped finely. I started giving her some very finely shaved carrot, which she seems to enjoy also..
Been pooping up a storm lately, and some monster ones too!
Designing a new, larger, lightweight enclosure for her as well!
B

Original Poster
While I was home on labor day weekend, JoJo was in a major shed, and did not appreciate me attempting to handle her. However when I was getting ready to drop in her first batch of 24 dusted crickets, she chased down every one. Gave her another 24 on Monday, which she devoured with the same enthusiasm!

She is also back to eating her veggies (orange pepper, raw green beans, shaved carrots) along with her fresh dandilions. She still have no interest in the fruit I give her (grapes, strawberries, blue berries and apples). maybe that will reactivate soon as well!
B 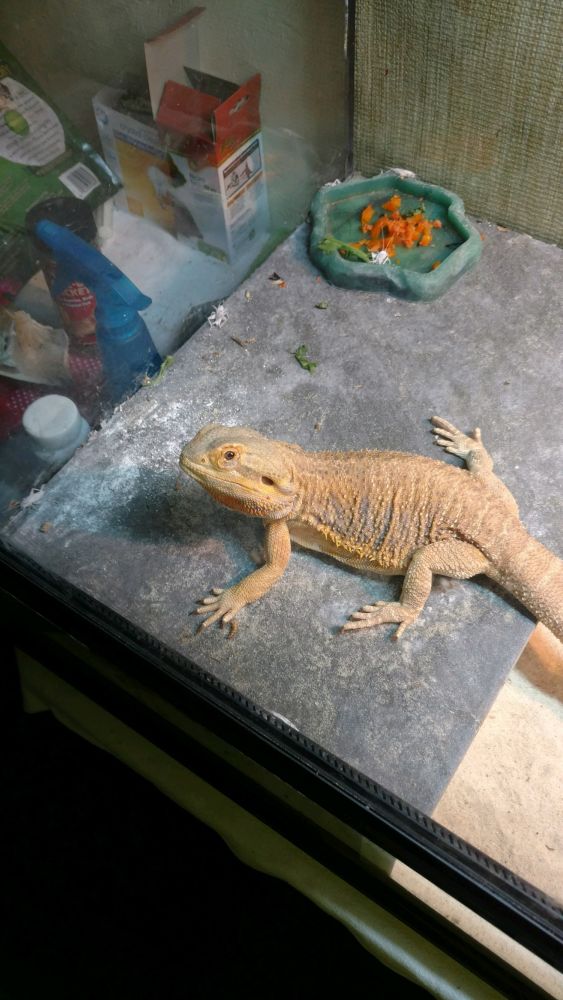 JoJo chasing her crickets!!
B

Original Poster
Little JoJo, is becoming a finiky eater again!
She loves her greens, devours them, and this weekend she feasted on 5 dozen crickets in a span of 2 days. But, won't touch her once favorite veggies or fruits again. It seems to go in spurts...

but she is still our baby! grand-daughter was sitting on the couch holding her, but wife didn't get a pic!

L
The Unending Journey: Ardie and Me
2

The story of my very first true rescue, Thor.

T
Advice on a gravid beardie...