Original Poster
Ill post the pic of what the vet did tomorrow and then again when I go back on monday .
M

If you spent more than 15 minutes studying how to properly take care of bearded dragons you would know that you shouldn't house multiple dragons together, ESPECIALLY if there is a drastic difference in size between them. I guess you couldn't be bothered?

I don't know how you didn't realize that something was wrong with Savannah's stunted growth. That's what happens when a larger dragon dominates another, they don't eat as much or thrive as much as they would on their own.

Not housing multiple dragons together, no heat rocks, and no lettuce are all extremely basic things you should know about before buying a bearded dragon. For the sake of your current and future pets, actually make an effort to learn how to properly care for them. I hope your dragon heals up, but you seriously need to start being more mature and responsible.


[Moderator note: PM was sent]
A

In all fairness to the OP, there is a lot of conflicting info out there, plus the fact that you will see misleading pics on many breeder's websites of baby beardies sitting on the back or head of an adult dragon. Those pics are cute, but are very misleading.....a person thinks that beardies are so relaxed + easy going that it looks like babies are safe even with an adult dragon. In fact, a baby can be eaten in literally one bite if a large dragon decides. And the pet store often house dragons of different sizes together, so a new owner can be unaware of any danger.

The fact that OP took the time + expense to get the baby to a vet shows that he does care very much about the welfare of the dragon. Hopefullly Savannah will heal up just fine.
M

Yes there are some misleading things out there. But if you actually make the effort to search whether it is safe or not, the answer is extremely obvious. When I first learned about bearded dragons I wanted my first one to have a buddy. I saw the really cute picture of the different aged beardies stacked on each other. After 5 minutes of research I realized that it was almost unanimously considered a really bad idea.

I'm not saying they don't care about their dragons, they obviously do, I'm just saying that they were previously irresponsible. If they had put in the time and did a lot of research on their pets, this wouldn't have happened. I'm being pretty blunt here, but it's something they need to know if they want to provide the best life for their pets.
R

Original Poster
Molson relax buddy. The vet cost was more then I paid for both of the dragons together. I bought both of them at the same exact time and fed them seperately and one is bigger then the other and finally realized it. That's nature. Like i said tanks and lights are expensive, I'm not made of cash. It was bound to happen but didn't think it would this fast. They are only 3 months old. And like I said I say lettuce because its easier than saying mixed green veggie fruit salad sorry about the terminology. I guess I'm just not a responsible linguist. I came on here for a little help about a broken leg. Don't attack my character.
R 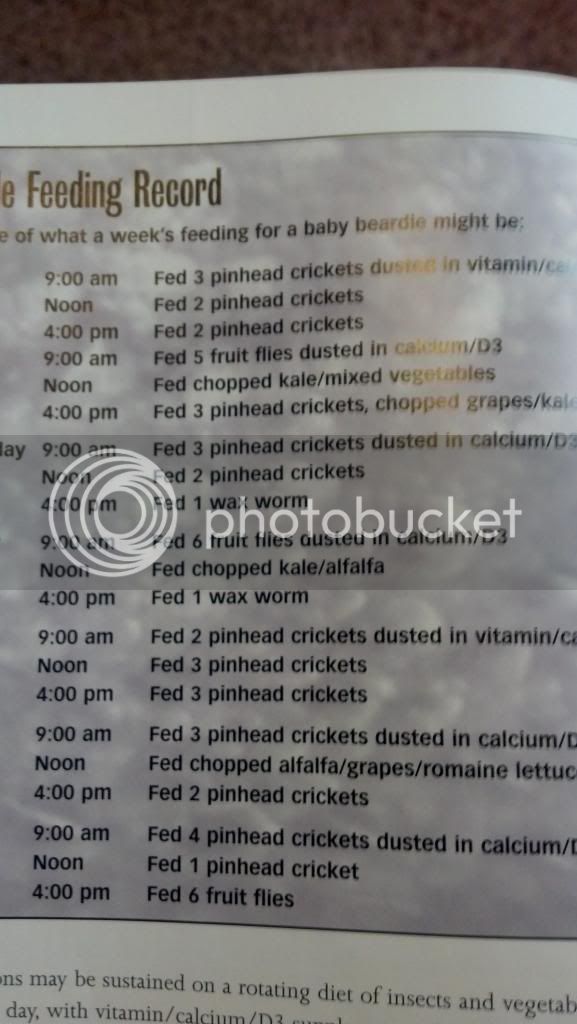 This is the guide that I am using. Minus the fruitflys because I can't find them anywhere, and adding celery leaves and carrot shavings with the kale and romaine. I am not using iceburg because it has no nutrients. Is that okay with you ??? I will admit housing different sized beardies together was the wrong thing to do but Boss grew so fast and i thought that they would be good until juveniles. They are separated in their own tanks now, So let's move on OK pal.
R 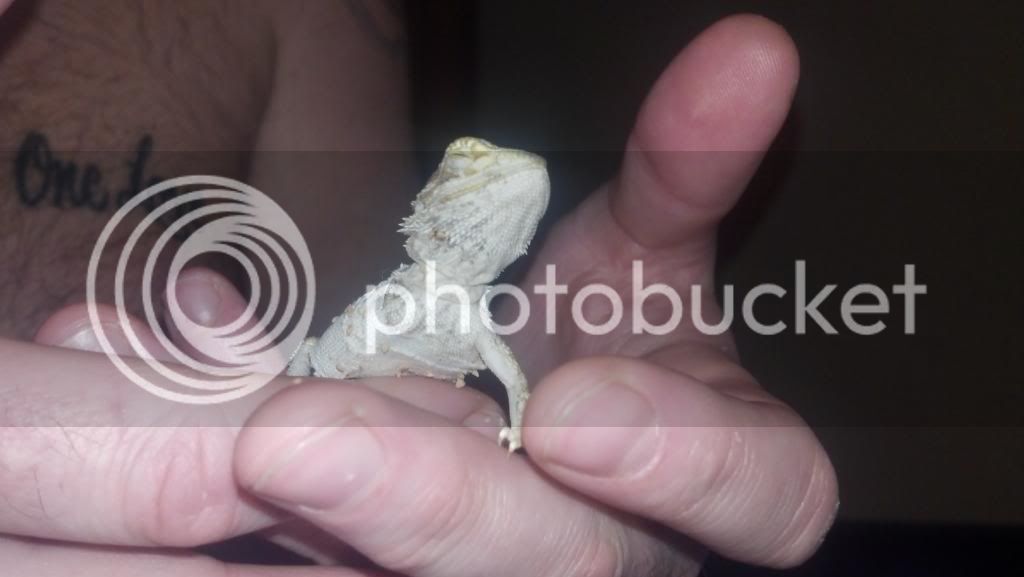 It is in a sling bent and taped underneath.
Figured I'd shared. Thanks to all who helped.
R

Original Poster
Mustard and turnip greens on the menu now

First let me say I am not a vet but was a paramedic and did work in a er for many years and people medicine in some cases is much like animal medicine. I am going to try to explain something and hope I make some sense. I am sorry your beardie was injured and glad you took her to the vet. I am almost positive the reason for the body wrap is to immobilize her leg in its entirety. With her humerus broken all the way through, they will position the leg or arm in the best possible position for allow for healing and bone mending. Animals do not understand splints and casts and will do their best to rid themselves of the cumbersome apparatus that most likely frightens them as they don't understand it and that its to help them, they feel trapped. In your beardies case its to keep the leg in a good position and to keep her from gnawing on or scratching at the splint to get it off. If the break was close to the shoulder, and I don't know that it was or wasn't, the vet could have told you that she may never use it again because as the bone heals in its current position its possible for the shoulder to freeze. Also do not be alarmed when the splint comes off that there may be a noticeable difference in size compared to her other arm, this happens and its normal. There may be some muscle atrophy also which can cause her to limp if she gains reuse of her arm so again don't be alarmed. Again this depends on how close in proximity to the shoulder the break was. I would also watch for signs of infection..redness, heat, lethargy, lack of appetite <which may occur at the break site also at the bite site> but since its wrapped and you cant monitor it, just closely watch her, especially her eyes as they will change a bit with infection, they may get a bit sunken. Don't be alarmed but talk to the vet if you notice a change. She may also get a bit pale especially in her tongue and gums as she fights infection so its good shes on antibiotics. Give her a probiotic in addition to her antibiotics as they are harsh on the system and can kill off the good gut flora. Non dairy soy yogurt is good, benebac is also good, which you can probably get in the pet stores. Give probiotics 2 hours after her antibiotic is given and for up to 2 weeks after her antibiotics are done to ensure her good gut flora is replenished. Now on the other side of this, if for any reason her leg does become infected, it may need to be amputated. if this happens beardies do very well with a loss of a limb. I would also up her temps at night to 80 to 85 degrees to help boost her immune system. I hope this helps some.

Staff member
Moderator
Thank you, Tonya, for the very helpful advice.
A

So you say that she is eating crickets on her own now, or were you hand feeding ? That's great that she has an appetite , hopefully she'll pull through this just fine and the pinned back arm won't be too badly affected. I've seen babies with very similar injuries heal perfectly with no splint. They just wouldn't use the leg for a while and suddenly they just start walking normally again. They do heal well in general.
R

Original Poster
I hand fed her a couple and then just ripped a leg of a couple and dropped them in front of her and she gobbled them up. Of course I dusted them with calcium first. Today she only ate 6 crickets total and she made it into her water dish a couple times. She loves water. Her right eye was in a little pain when she got bit and was closed most of yesterday when she got bit but she has been opening it more but is def. Not as alert as she was prior to the accident. She did poop once today which was a good sign and she is moving around the cage and seems to be regulating her heat well. I did go get a 150 watt basking light today and have her in a 29 tall. I removed all climbs as well so she has a nice little hospital tank.
R

Original Poster
And yes thank you Tonja. I will keep you posted. I have a follow up on Monday with the vet.

aether
substrate looks scrumptious
Sunday at 1:50 PM •••
X
Xinex1567
My female bearded dragon has recently started gasping for air all the time. She can’t get sleep or really do anything because she has such a difficult time breathing. I think it might be a RI but I’m not completely sure. Any thoughts?
Nov 13, 2022 •••
L
LauraLeigh
Building a custom enclosure from an entertainment center. Can't wait to see how it ends up! Custom Build
Oct 17, 2022 •••