I don't know what is wrong with my beardie

i have two things,
1. my pygmy bearded dragon has always not eaten by himself. i have to put water on his nose and when he licks it i put it in his mouth. i want him to do this by himself without me. if i don't feed him he won't eat at all, i am getting really worried if i put a cricket in his enclosure he will completely ignore it. IT WILL CRAWL ON HIM AND HE WON'T CARE! i can tell he wants to eat it but he won't, for example, today his eyes went pin point when he saw it and all he did was what looks like lick the air. i spend nearly an hour everyday trying to get him to attack by himself or even just take it out of the tweezers. it is really worrying.
2. this is leaked to the first one about a fortnight ago i changed his sand substrate to artificial grass in hopes for him to attack a cricket ( he couldn't attack a cricket in sand substrate because bad for him so i would but it in the food bowl but never worked.) he still won't feed by himself and now he is glass surfing and trying to escape. we have this little mesh stripe in his enclosure and he will climb that to try and escape. he won't sleep in his usual hiding spot but near that mesh stripe in the back corner. side notes
the enclosure is big enough his temp is good we have a ceramic heat light for night and uv and 100w heat light for day his day temp is 30-34 celsius ( 86-95 fahrenheit) and night temp is 24- 26 celsius ( 75-78 fahrenheit). he also only poops when he is in the bath. we have a good diet for him one day veggies and next day cricket or meal worm ( usually cricket ). Every few days he has a calcium coated cricket. he usually only has one cricket some time two and he is very fussy when it comes to veggies. i try and feed him every day but sometimes when i do the water trick on his nose he won't lick i think he licks his when he is hungry. he is very fussy and only eats particular vegetables he love peas it is the only veggie he will eat lots of i have tried, peas ( favourite , baby spinach( won't eat ),, bok choy ( won't eat ), sweet potato ( sometimes eats ) peaches ( sometimes eats ), rocket ( won't eat ), ice berg lettuce ( sometimes eats ) and strawberries ( won't eat ). he also looks at the glass alot the enclosure is in a little nook in my house so 3/4 glass walls are covered are surrounded could that be something to do with glass surfing. he also only glass surfs the sides were the glass is surrounded by the walls. he is a bit small for a pygmy he is about 3-4 cm off the average ( including tail) he is about a little over 8 mouths old.

side thing
he always gulps always ever since he was 6 mouth he is always gulping.

i really need some help

You did not mention a UVB --- what are you using and can you please post a pic of the tank and dragon
https://www.beardeddragon.org/useruploads/ click on the XIMG at the top of the message box then click on the pic it should post
How are you taking basking temps? NO stick ons please they are inaccurate - you need a digital probe thermometer for best temps

Do you have any pictures you could post of him for us, along with the tank setup also?
Do you leave crickets in the tank with him?
How old approximately is he? If he is an adult using calcium supplementation 3 or 4 times
per week.
Are the crickets smaller than the space between his eyes?
It is possible that he isn't getting adequate calcium or UVB exposure. Is he losing weight
at all?

Original Poster
hi, he does have a UVB light, i am using a normal thermometer i will add a pic below of it, i will try to purchase a Digital one soon.

i don't leave them in there with him because they get under the substate so i usually sit there and put a cricket in front of him after a while i will pick it up with tweezers and try to feed him and if that doesn't work i usually do the water trick which i explained in my first post. he is approximately 8 nearly 9 mouth. he has a calcium coated cricket every few days. the cricket are smaller then the space between his eyes. it could be possible for not enough calcium maybe. i haven’t noticed any drastic weight loss, so no.
thank you so much for the help by the way.

i will post the pics in the morning once lights are on and he is awake.
J 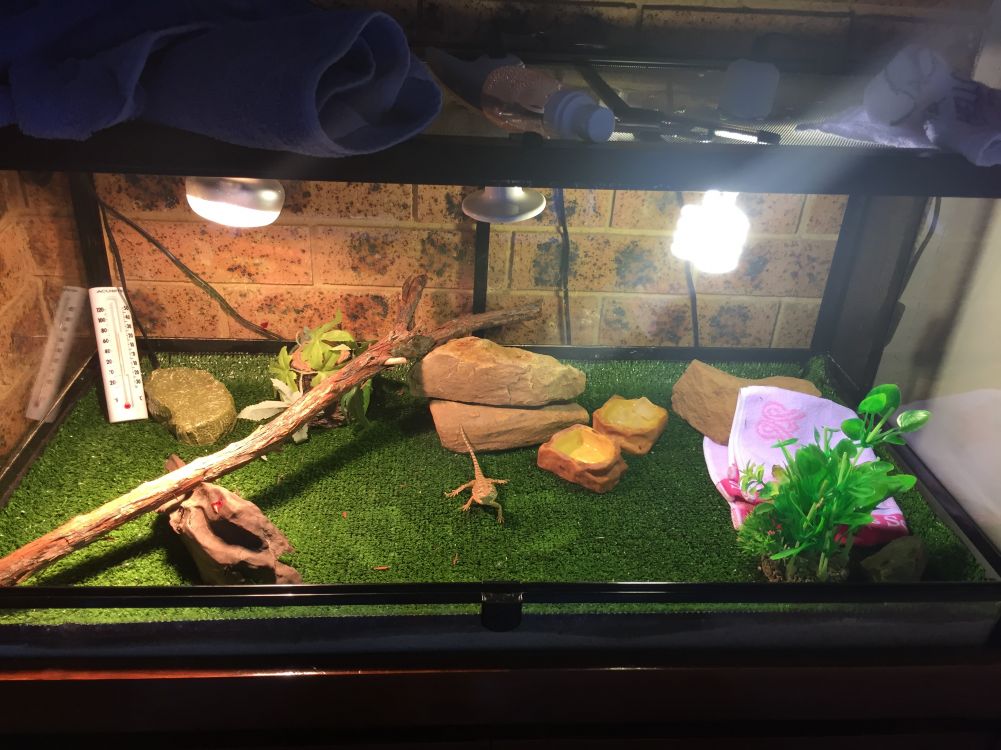 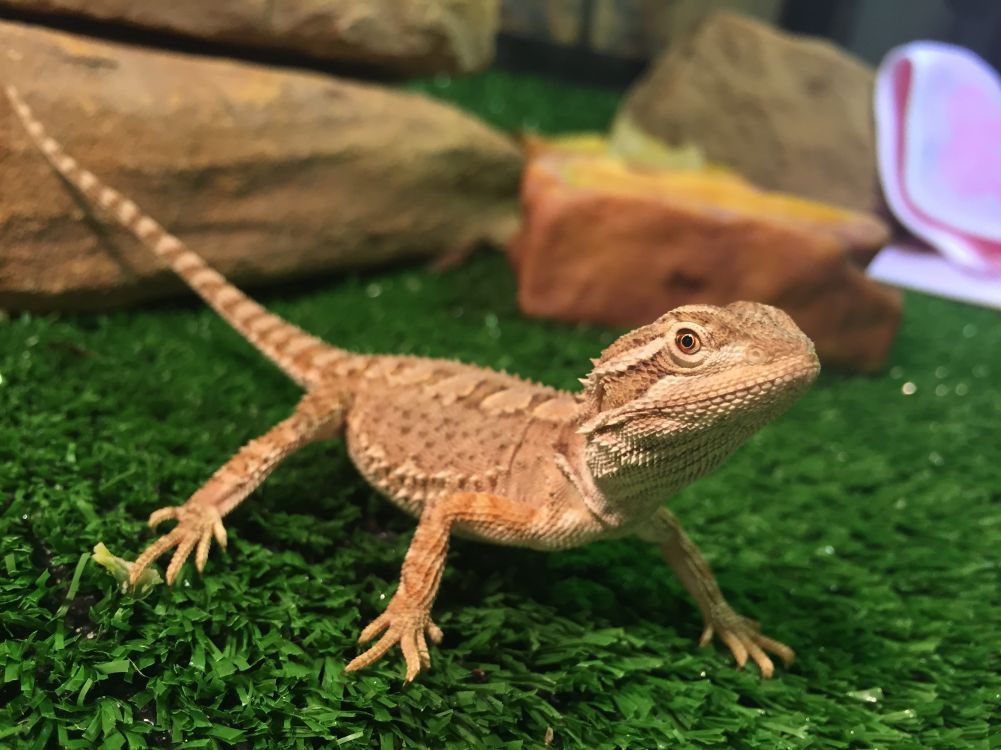 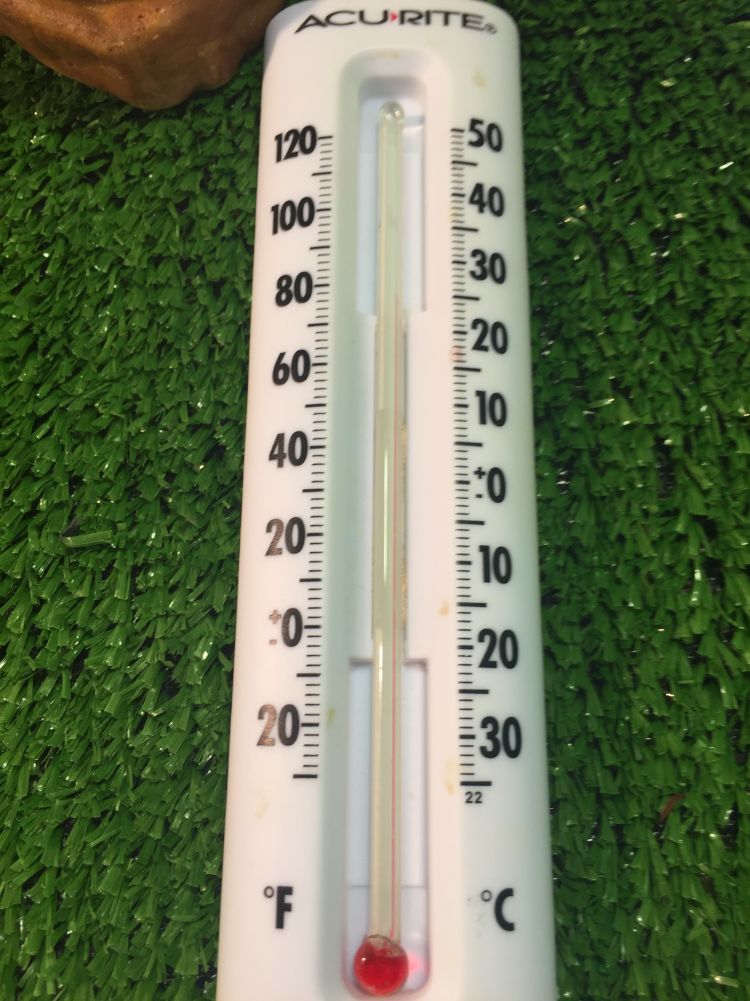 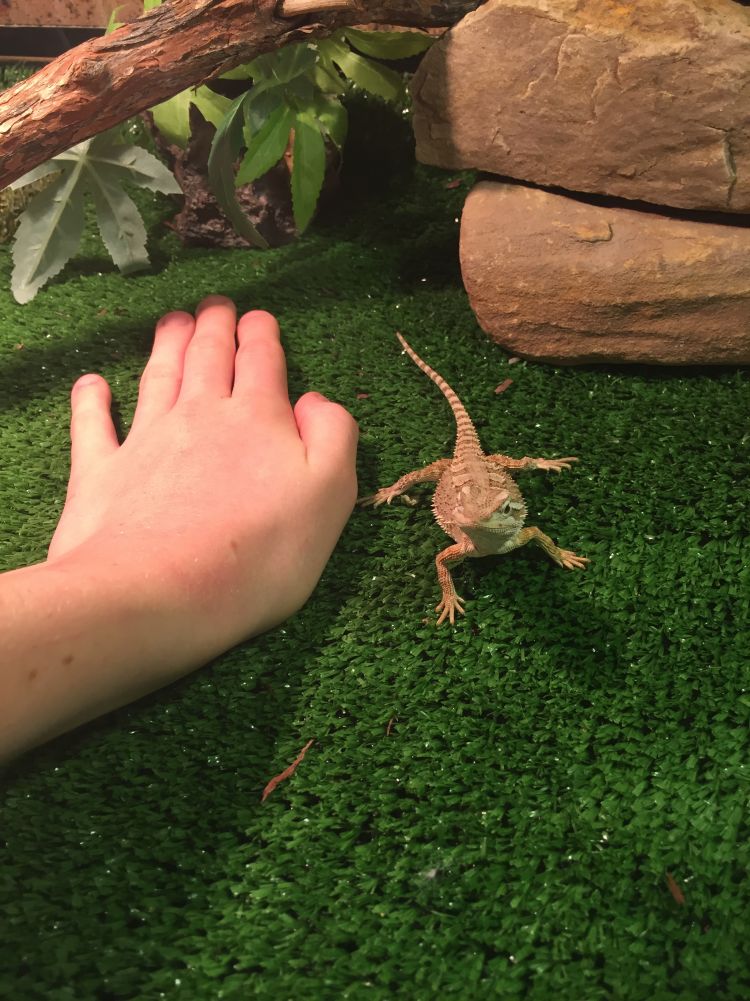 Original Poster
thank you for the help i will look into the UVB light and the thermometer, unfortunately i only just changed the substrate 2 weeks ago so it will be kept the same. thank you so much for your help but is that what is wrong with him. why won't he attack crickets and other bugs and why does he gulp so much?
K

The basking temps and UVB play everything in the health of your dragon - I would try feeding him outside the tank in a tub and see if he will go after the insects in that -- are you feeding him in a bowl? But he wont eat w/ out proper UVB and basking temps -- please get that fixed ASAP and you should see a difference in the appetite - w/ out proper UVB he cannot absorb the calcium your feeding him hopefully dusting his crickets w/ calcium D3 5 x per week ONCE per feeding lightly coated and vitamins w/ beta carotene 2 x per week ONCE per feeding lighting coated --- the grass needs to be cleaned you dont want him getting sick from his poop --- I am not sure even how to clean artificial grass -

Staff member
Moderator
Moved by Moderator from General to Health

He is super cute! How is he doing today?
Have you been able to get the correct UVB lighting yet?
He does appear alert in the pictures so hopefully he is feeling well. How is his appetite doing
so far?

B
Have some eye problems i don't know what to do

Help! I need to know if my beardie is the right size for his age!!

I don’t know what to do with my beardie