Hi everyone! New here and I'd like to introduce myself and my baby dragon, GIR the Magnificent!! He is a 2 month old, stunning red orange male, probable Het Translucent. Momma is a beautiful Het Trans prob Het Hypo and Poppa is a handsome Het Trans, both parents are very red so I cant wait to see how his lovely traits develop. He's 7" atm (I swear he's already grown since he got here) and he's starting to shed. Still need to grab a scale so I can weigh the little guy. He arrived a little over a week ago from KP's Critters and I am so in love with this little dude. Everything seems good so far, making tweaks here and there to make sure he is a happy, healthy dragon. Going to need a few pointers so I'm glad to have found this place.

I grew up with reptiles and have had two beardies in the past so I am familiar with the care they require but I know I'll need some help from all of you and can def always use extra tips and knowledge I put a lot of work into GIRs vivarium and despite some hiccups, everything has come together nicely. His rocks are custom hand made by yours truly. So dang proud of them even though they have unfortunately begun to crack already... think the grout I used was old... seriously sucks. I plan to ride them out until they get worse or begin to crumble and are no longer safe to keep in the enclosure. Figure it will be difficult to clean them due to the cracks as well so eventually GIR will get a tank makeover....I planned on these lasting sooo much longer.... meh

His vivarium is actually an old lobster tank I found second hand. Wish it was a front opening deal but I just couldn't pass this up. Believe it is around 90 gallons...not sure but it's pretty dang big. Dimensions are 63"L x 21"T x 14"D. He has so much room for activities and seems to enjoy himself scampering about. I do make sure to approach him gently and from the side instead of hovering straight over him. Temps are hanging great in there and the gradient is wonderful. Running a 48" Zoomed fixture with a T8 10.0 bulb, it covers about 80% of the tank and is mounted on the inside. I did have to switch his basking bulb as the flat rock is holding way too much heat. Placed the basking spot lamp over the branch instead of the rock and put an incadescent over the rock. I have a 75w basking bulb over his basking branch that is holding in the low 100s, doesnt get more than 110. Also have that 60 watt incandescent on the hot side to keep temps up. Only problem is his flat rock really holds heat (I've changed bulbs many times now & raised/lowered the fixtures to get things right) ambient temps hold nicely but his flat rock is still getting too hot, there are areas I measure on the flat rock with my temp gun that are around 125-130.... but its only intermittent. One area reads lower and then right next to that spot reads high...aggh...When I place my hand on it, it seems reasonable but the temp readings are really getting to me, they're all over the place! Going to run out today and grab two more lower watt incandescents (25w & 40w) to try and lower that rock temp while still keeping the ambient up. Think the 40 might be the one... Any thoughts about this?
He loves his branch though and spends much of his time basking and climbing all over it and then running over to his cave lair and back again. I would eventually like to get a thermostat for my heat bulbs to make life a little easier but need to wait on that for a little. Until then I am checking temps throughout the day. Need to get a probe thermometer too instead of the little black ones I have now.

GIR is eating dubias and crickets atm but doesnt have much interest in his veggies. I put some in his bug bowl so he does get pieces here and there when he gobbles up his insects. Keep reminding myself its only been a week and he's still getting used to his new home. Going to pick up some phoneix worms too to mix things up for him. Calcium daily with every meal and multivites=dusted on one meal Mondays.
I have slowly begun to handle him for small amounts of time. So excited to build that bond. Slowly but surely. He's had a few baths (which he just loves) and we've gone outside the last few days for sunbath bonding time. He seems to really enjoy the sunbaths too I think he likes me guys! hehee

Check out my little buddy and his new home!
Excited to meet all you other beardie lovers. So happy to be here 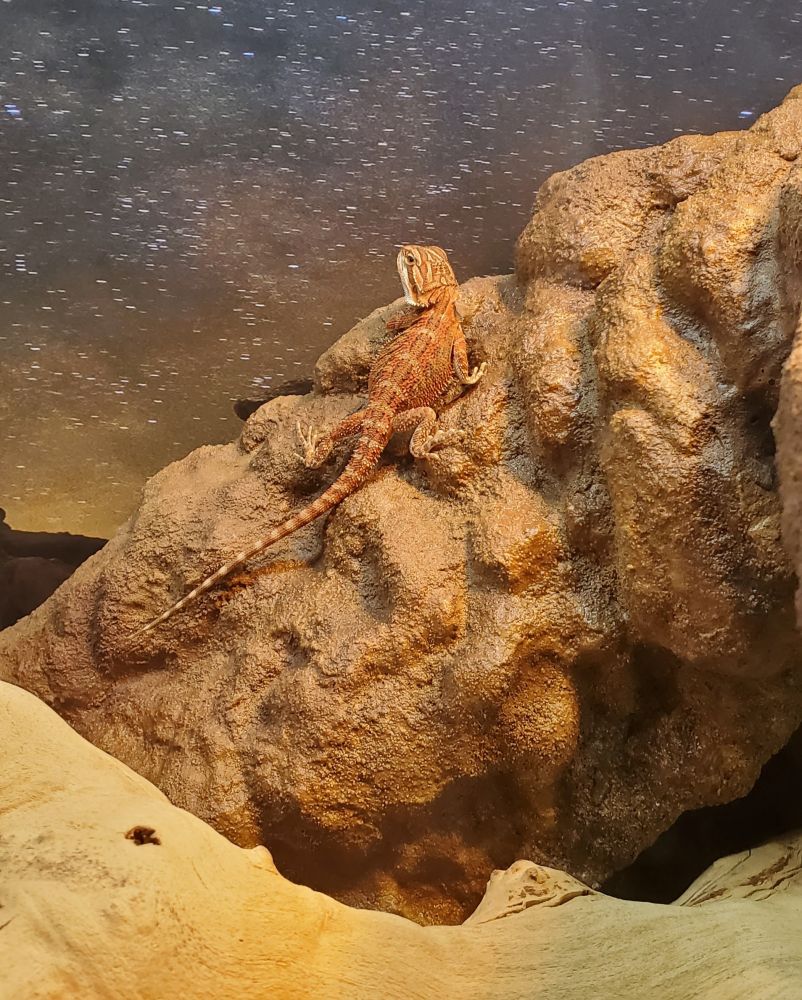 Placed some tissue paper on the left around his lair. His little self can slip down the rocks...Grow baby grow! 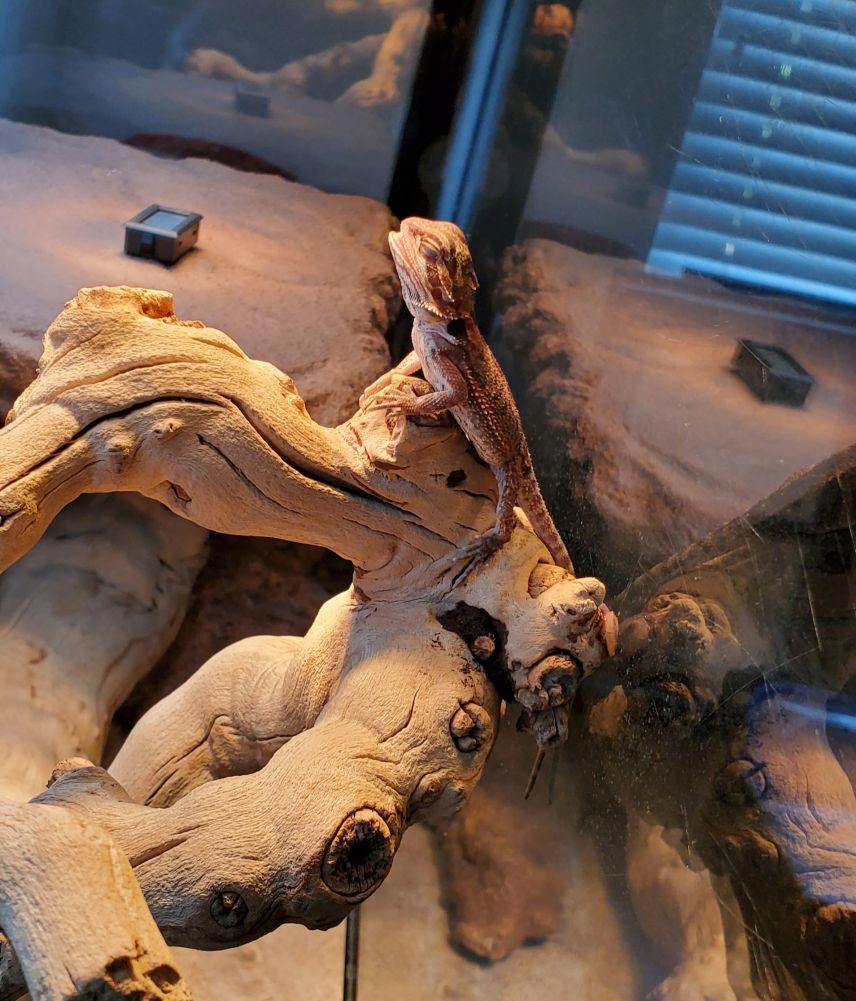 Original Poster
Hi Karrie thank you! I am concerned about the UV light being too far away from him. Was one of my next questions actually so thank you for the tip. Going to make some adjustments and fix a few things today so he's closer to the UV. My brain thought it had everything worked out but it seems my adventure is just beginning. I will get this dialed in! Curious. How far forward does the uv light project? Is it more of a straight down, underneath the light or is there light that will penetrate forward? Hope that makes sense... I really would like to get a uv meter eventually but goodness those things are expensive...
K

K
Kacper
I need help my bearded dragon is acting strange when she eats its like she doesnt feel her tongue she walks in a very strange froggy way not like she used to
Today at 2:29 PM •••

Brandon U.
Looking for advice and recommendations!!
Today at 1:16 PM •••
N
norrisjill925
In this post, we've shared some fantastic Clothing brands. They Offer Wholesale Clothing in USA.
Carhartt Clothing Wholesale
Friday at 5:01 AM •••

JeremyPsychonaut
New bearded dragon owner
I have some questions regarding uv lighting
Tuesday at 10:39 AM •••