grey spot on top of head

First I just want to say I love this webpage. I find all the info I need usually. But my 1 1/2 yr old female has a greyish spot on her head and not sure what is it. She still eats her crickets and has slowed down on her veggies though. It kinda looks like she was trying to shed but she hasn't in awhile. Looking for a vet right now. But I live in Mulberry and really don't know of a reptile vet around here. Please help I love my babies.

Hi and welcome to the site.
Is it possible to post a picture of the area?
L

Original Poster
ok I really feel like an *****. I can't get my pic to download. Is there a special way or something. Also, I have a nice big branch I want to put on the tank but it hasn't been protected yet. Does anyone know what I should before I put it in the tank.
L

Original Poster
heres the picture she has a little bit on her leg also. 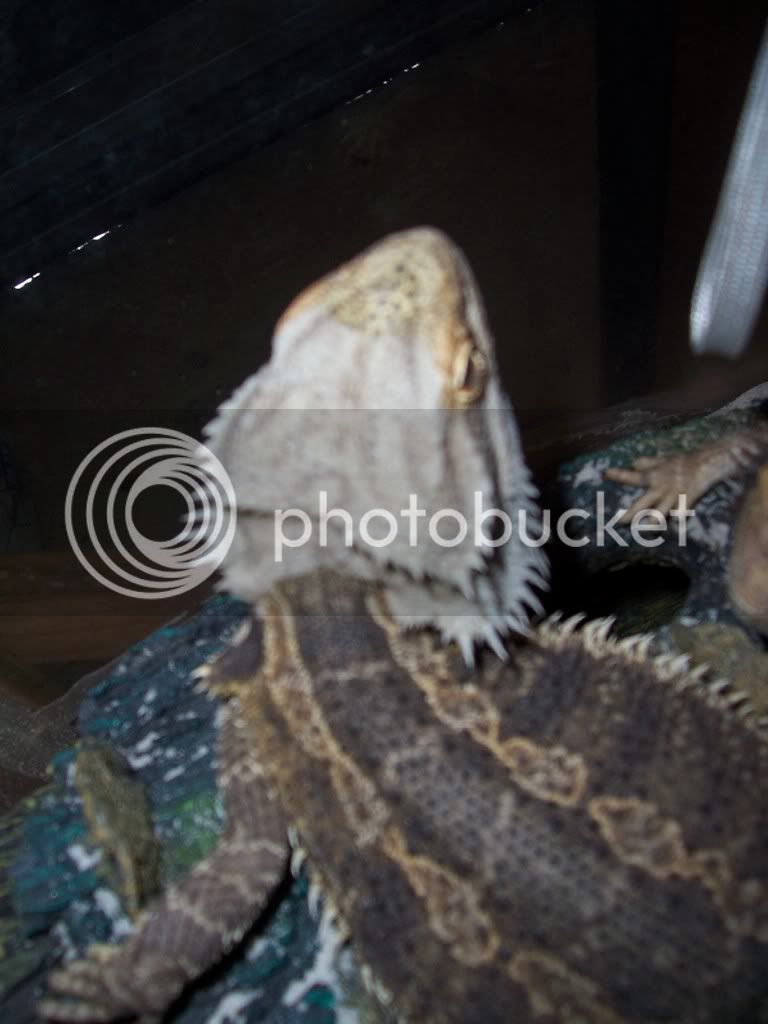 Retired Moderator
It looks to me like she's getting ready to shed her head area. Once they become adults, its very common for the skin on their heads to take a very long time to begin to flake off. It's taken a couple of mine at least a month to go through the entire process, and you may find that she goes off her food and gets extremely cranky during the shedding process when shedding her head area, as it makes them very itchy and extremely uncomfortable.

The reason for this is that the scales on their heads are much thicker than the scales on the rest of their bodies, and because of that, it takes the new scales under the old skin much longer to form. Also, once they become adults, their bodies provide a build up of fluid underneath their old scales, which is what causes the gray coloring that you're seeing.
This fluid serves to protect and nourish the new scales underneath, as they form.

Once the new scales are completely formed, any leftover fluid will be absorbed by their bodies, and then the old skin will begin to dry out and come off. You may find that it will also take your beardie longer to get the old skin off when she sheds on her head, as the old skin tends to get stuck on their spikes. Make sure that your beardie has some sort of a rock at head level in her tank, or something else that she can rub against to get the old skin off. Also, you may want to offer frequent soaks for 20-30 minutes in warm water, as that will aid in the shedding process.

One thing that I should warn you about, if this is your beardie's first shed, as an adult, is that you may find her basking
under her lights with her eyeballs looking like they're about to explode. They will sort of look like one of those pop-eyed goldfish that you see in the pet stores, only worse! If you do, don't panic, and think that there's something terribly wrong with her, because its perfectly normal. Bearded Dragons have the ability to pop their eyes out like that intentionally, which they do in order to stretch the skin on and around their eyes prior to shedding. Thank God that I knew about it when one of my beardie's first did it, or I probably would have had a heart attack! LOL It looks terrible!

If you click on the "Care Sheets and Articles" link at the top of the home page, and scroll down through the articles, you'll find an article on eye bulging, complete with pictures, so you'll have an idea of what to expect if and when she should do this. We're very lucky that one of our members was able to catch this pic at just the proper moment, as, if you catch them at it, they immediately stop doing it. No one knows why..... just another one of the oddities that make a beardie a beardie. However, I thought I'd better warn you, just in case. The sight of it is enough to scare you to death if you don't know in advance what's going on! LOL
J

omgosh yes, i thought that the eye bulging ment there was something wrong!!..

i was very scared, i didn't know what to do.
G

my beardie is going thru that stage of shedding right now, good job i looked at this topic, i knew his head would been shedding soon because of the same grey mark as your BD, just glad them going off their food is normal, mine has ate like 10 cricks the last 2days. lol.

Original Poster
My baby is all better and we might have another surpise. Looks as though she might be pregnant. YEAH :lol: I already have my incubator. Ready to roll. Thanks for all your help.

Jan 11, 2022
Madburchell
M
A
Weird patch of skin on back and strange smell from head