First Time Out of the Viv

Well, Spark got to come out of his viv and explore for the first time today. We've taken him out and let him sit on the bed before this, but all he would do was crouch down and try to become one with the bed. When we took him out today, he stood up and looked around. Eventually he crawled down the edge of the bedspread and onto the floor. We let him explore for about five minutes (still need to beardie proof the room - would hate for him to try and swallow a lego piece or a piece of old ding dong - its my son's room ). When I went to pick him back up to finish feeding him, he puffed and tore across the room into the bathroom. He was definately not ready to go back into his viv. We were all very impressed with his bravery.

Of course, just after that I put his new thermo (acurite digital probe from Walmart - and don't get me started about how flipping difficult it was to find the darn thing!) in his viv. He bearded at the probe being in his spot. Was not happy. Had some great patterns in the stress marks on his belly and chest. I'm pretty sure he thinks the thing is going to eat him.

Isn't it funny how "threatening" those thermometers are? Our 10 month old did the same thing for an entire day the first time we put one in his viv.

I cant keep one in Rubens Viv. I have to put it in and watch him like a hawk.
He tries to kill and eat it every time.

Original Poster
As my son said when he was four, "It's wary, wary dangerous!"

At least I don't have that problem, . . . I just hope it doesn't keep Spark from basking, although its not on his absolute favorite spot. The probe is right under the light and Spark's favorite spot is a little off to one side.

Eventually he'll get used to it If nothing else, he'll just decide to move the probe over and you'll just have to put it back. We are constantly doing that.. and if you know what your temps are, then a few moments without the probe directly under the light shouldn't hurt.

Original Poster
Well, I peeled the sticky piece off the back and actually stuck it to his log.

Good luck to him if he can move it.

I have a question though, being a mom and all, I worry about the cord for the probe. Has anyone experienced any issues with this? I have it going up the side of the viv and then back down into the viv by his basking spot, but I still worry about tangling. Has anyone else had an issue with tangling?

I haven't had any issues as of yet, but we have the unit itself sitting on one side of the viv and the cord tucked underneath the tiles along the backside and then enough of it out to rest on basking spots. It may be easier for us this way as we have slate as the basking areas... they used to use logs for basking, but since they don't absorb heat very well, we were having digestion issues with Nero. Now the logs are in there just for lounging... Lounge Lizards! HA!

He ate about 60 crickets this morning, and three droppers of squash, but hadn't touched his silkies yet, by the time I had to leave. Yesterday, he ate about a half cup of dandelions. He is also a beardie who will drink from his water dish, rather than poop in it. He is very well hydrated.

It is sooo much easier feeding a baby who isn't sick. It makes me so happy and eases a worry I still carry from Ash.

I'm almost positive your cool side temps are fine. I think they are actually suposed to be 75-85*. Hopefully someone can confirm that.
Sara

Original Poster
Thought I'd share some photos of Spark's second time out of the viv.

He loved looking out the window. We are going to rearrange the furniture so the bed is under the window so if he is startled or jumps from the window ledge he won't hurt himself. 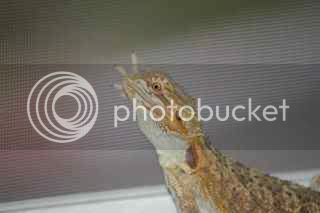 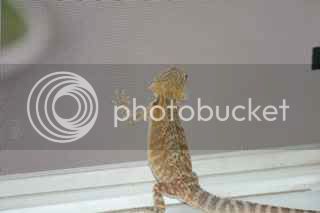 And then he moved to the floor. He is adjusting to being out of his viv quite well. . . 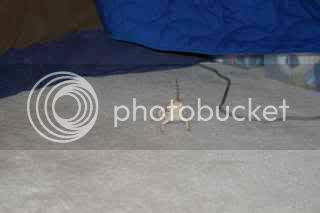 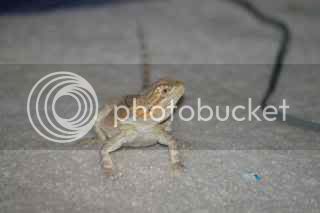 Awww he looks great! Standing tall and lookng around at everything rather than pushing himself to the floor in defensive mode.

Original Poster
They grow up so quick!

Apr 23, 2021
kingofnobbys
K
W
Beardie "coughing" as if to cough something out.

Ayyy I’m back! …With a new twitchy rescue, help.