I wanna wrack your brains a bit about my beardie eggs. It's at day 47 of incubation and they are starting to dimple.

Incubating at a steady temp of 84F, and humidity it great, lots of condensation on the lid of the tupperware (though is this a bad thing?)

No signs of sweating, so i dont think they are about to hatch, they've been dimple for the past few days.

Here's a pic of the eggs. 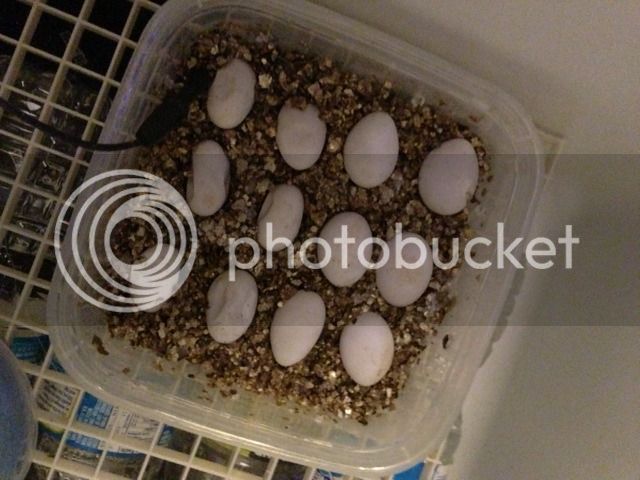 Any insight guys and gals?
A

The eggs are drying out....just add a little water. You have to be very careful, add a very small amount around them. Humidity level in the incubator is never an accurate way to tell if the eggs will hatch successfully. You don't need a humidity gauge at all, just be sure there is enough moisture and the eggs are completely plump. This can only be done if the vermiculite or whatever medium used is moist enough. You can blot the condensation off the lid with a paper towel, you don't want a big drop on the eggs.

I think he mentioned the lid Cheryl...said it had lots of condensation on it. I myself incubate all eggs in containers with lids, and once in a while there are still some that sag a bit and need a little extra water.

Oh, ha ha. Are there vent holes in the container?
T

Original Poster
Yes there are holes in the sides of the containers.

I've heard so many mixed thoughts about the containers. Saying that there is too much condensation on the lid and that it should be incubated without the lids.

Some say that my eggs are drowning because of the humidity, and some say that they are drying up

I've added a little bit of water to the vermiculite.

Ashley, you do want to wipe excess droplets from the lid [ I do ], only if it's forming drops large enough to drip on the eggs. Slight condensation is fine. So you have holes in the side of the container, but not the lid ? I like to have about 12 small holes in each container lid. The humidity level in the incubator does not kill eggs. An easy way to tell if you need to add water when you have have dimpling, and you wonder if there's too much moisture....just put your fingers in the vermiculite . If it's dry , you must add a small amount of water.....if it's soggy, you then may have too much water which could kill the eggs. By the way I'm not a newb at this, I've done it for many years. I know there are different opinions out there and you will often have people just repeat something they heard or read off a website which may not always be accurate.
T

Original Poster
I checked today and i see one of the beardies head poking out of the egg. I dont know if it's too early, and this guy is premature or not. When i took a look he wasn't moving.

I'm thought he may have died, but it seems that they get really tired and he may be resting. I'll have to check again in the morning.

The eggs have not plumped back though.
A

Wow, so they are already hatching ? It's a little early, they don't usually collapse at 48 days, that's for sure, but it's not unheard of . I wonder if the temps. are higher than you think ? Anyway, yes, the babies come out a little at a time. It can take several hours to about a day for a baby to emerge . Was it one of the sunken eggs, or the firm ones ? I hope they all do well. Sometimes you'll get an early hatcher, and the rest follow several days later, and also sometimes one or two will lag behind by as much as a week or so.
T

Original Poster
So after the first one hatched, the rest followed the day after.

All of the sunken eggs have hatched successfully even being collapsed for a week. I guess i'll never know 100% why they collapsed, whether it was too much humidity, not enough, or if they were just plain ready to come out.

So far 100% hatchrate with only one egg left to pip.

Thanks for all your help guys! This was one heck of a rollercoaster ride
A

That's nice that everything worked out, good for you ! I know you're excited, enjoy those babies.