I picked up four horn worms from my local Big Al's yesterday, when I got them home I noticed they looked a little different. Upon inspection, I noted that 3 of them had a slightly yellowish tinge to them, they were paler in colour than usual. Since these worms were much larger than the ones I usually get(not by choice), I assumed they may be a slightly different colour due to age. I also noticed they have dark brownish/black spots on them, I thought this may be dirt. I fed him one last night and he seemed fine for a while but, threw it up a couple hours later. It was pretty much whole, only one tiny chunk missing so, I guess he didn't chew. He has never thrown up before, to my knowledge. I checked out the other ones today, one was dead (which has never happened before). I rinsed them off but, the dark patches are still there even after rubbing them. As I was observing them, one I think actually bit the other and the attackee fled. I've never seen them be aggressive toward one another. I'm wondering if there is something wrong with them? I'm unsure if I should feed them to Salvador. If you have read my previous post, you know about the problems I am having with him so, it is possible his vomiting had nothing to do with the worm's health, or perhaps it was too large? I read they aren't supposed to be bigger than the width between the eyes, I assume this is referring to width since superworms are longer than that and are a common beardie food. The worm was not wider than the width between his eyes, though much larger than the ones he usually eats. I wouldn't have given it to him being unsure of size, except he is not eating anything else (refused supers, crickets, salads and wax worms so, he hadn't eaten in a couple days until I could get them. They're the only worm he's currently interested in at all.

Hi Cheyenne....I've seen them get a yellow tinge once in a while and die shortly after but it was not due to age, I've had much larger ones stay bright green. The yellowish ones seem to feel harder to the touch, too. My beardies still ate them though [ the ones that didn't die ] I can't recall black spots though. Do you happen to have pics of them ? I'm not familiar with Sal's problems but the hornworm may have been a bit too big and a bit tough or maybe he didn't have enough time to digest ? Most sub adult -adult beardies can handle a large hornworm. Here's a pic of some huge, nearly finger sized worms....bright green + healthy. My adult dragons chow them right down.

Original Poster
Yes, I do have pictures but, I can't for the life of me figure out how to post the bloody things without using a public photo bucket type site. :/ If you know how I can attach them to my post, please enlighten and I will do so. lol These worms just look gross, which is weird for me because these ones are my favourite, I find them so pretty. They also stink worse than usual and now I noticed they seem to be secreting this maple-syrupy coloured and textured goop. I rinsed them off again and put them back in the cup but, half hour later more goop.

Original Poster
I figured it out!!! Sorry about the crappy picture quality. 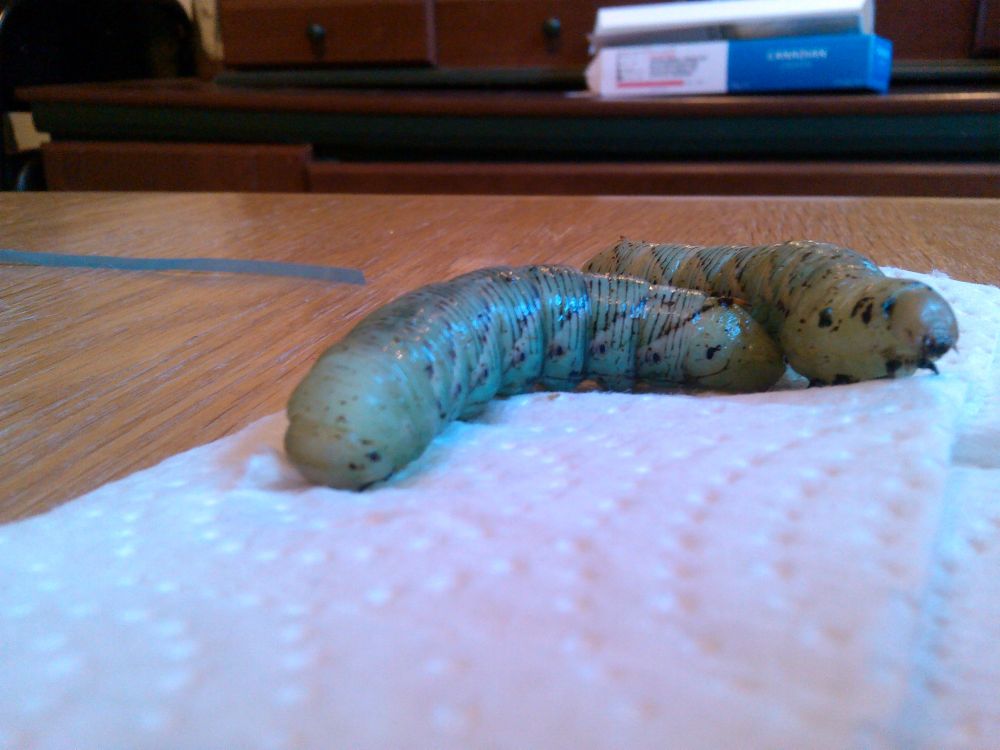 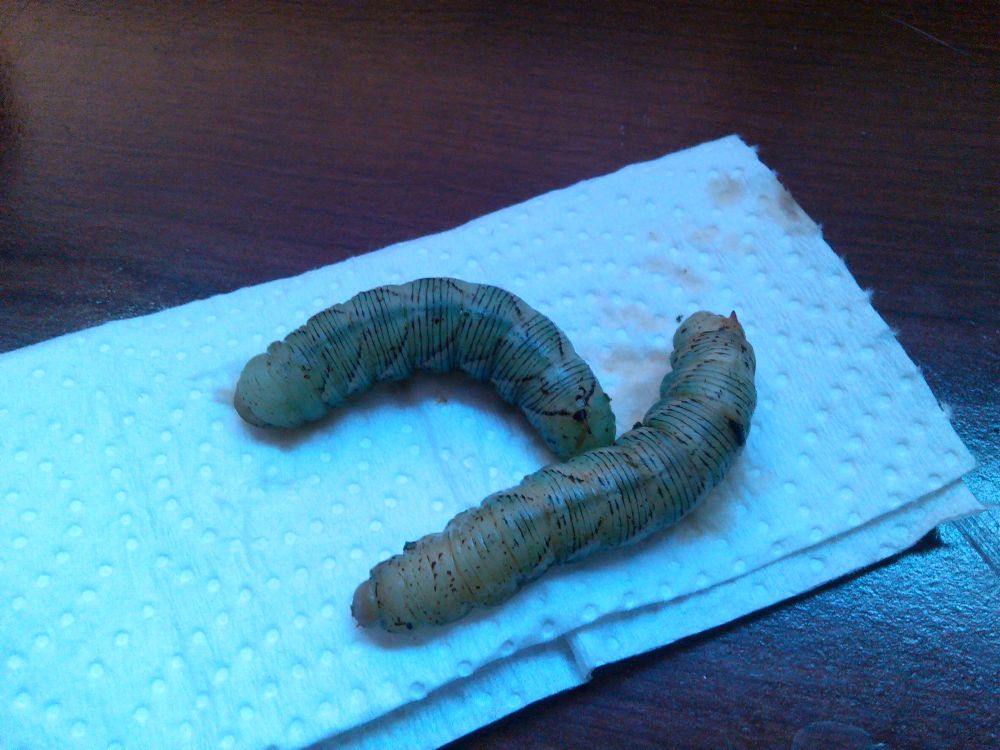 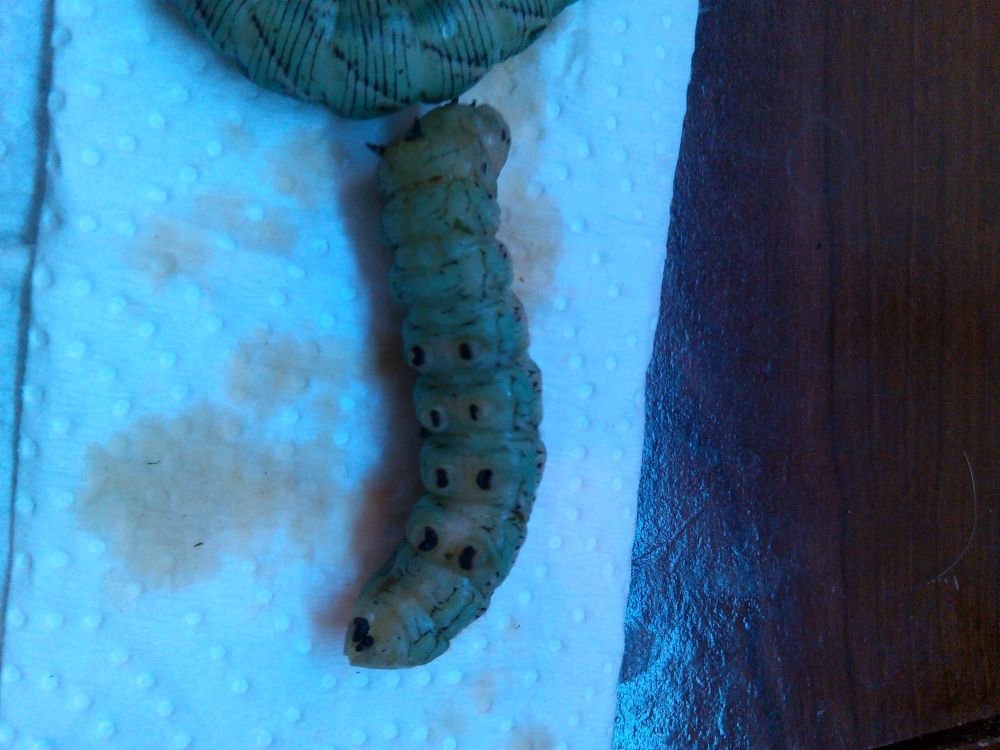 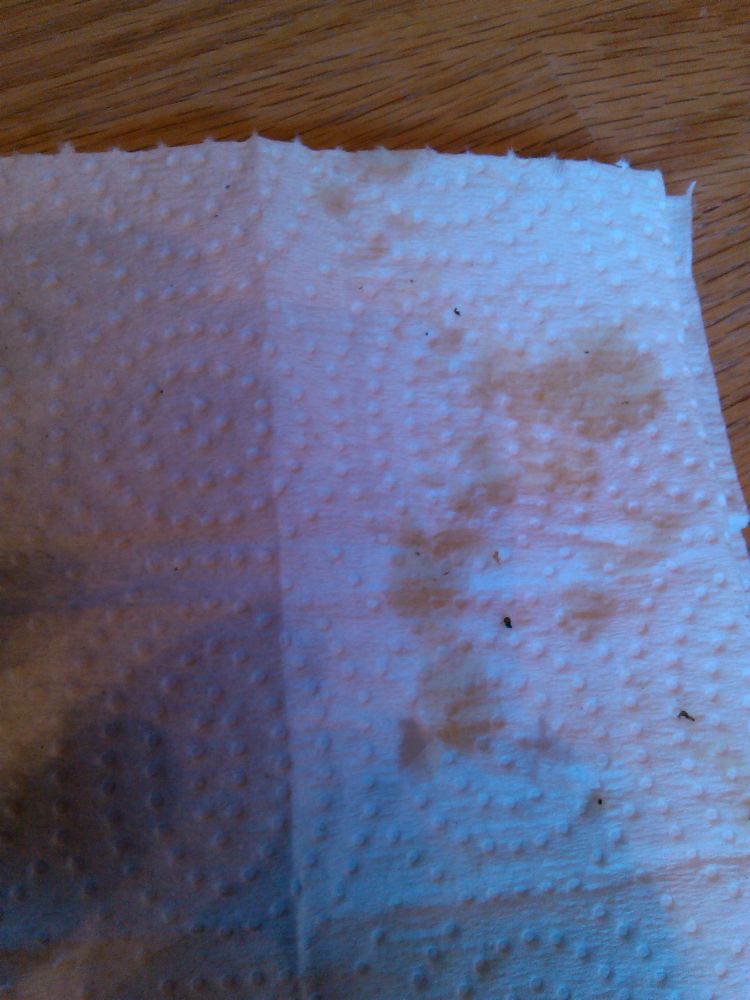 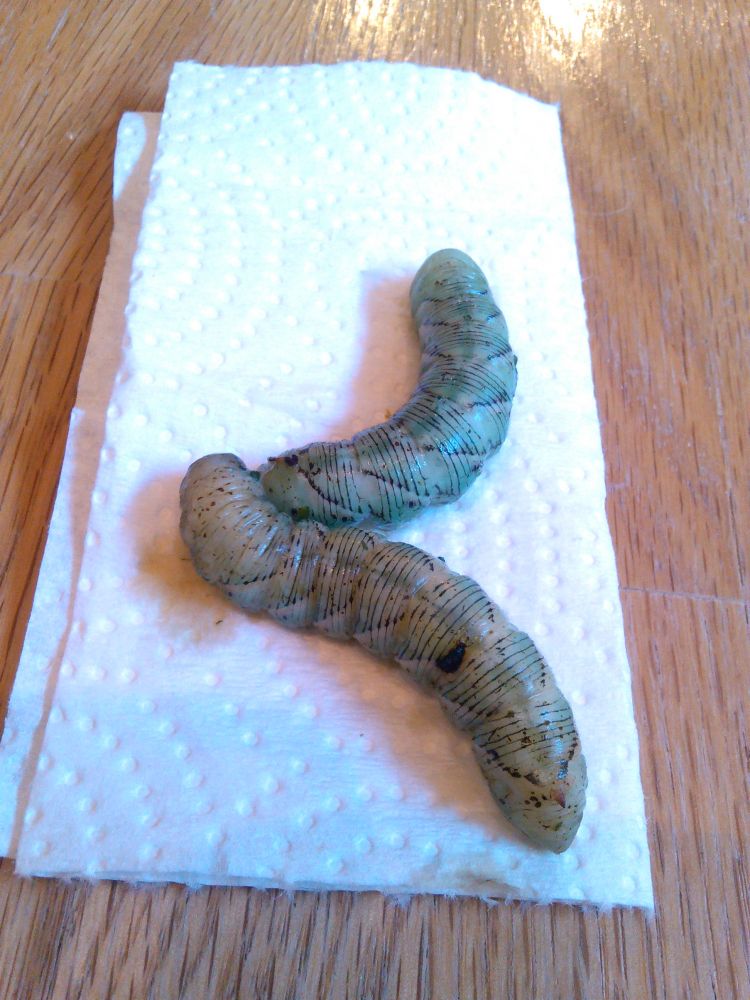 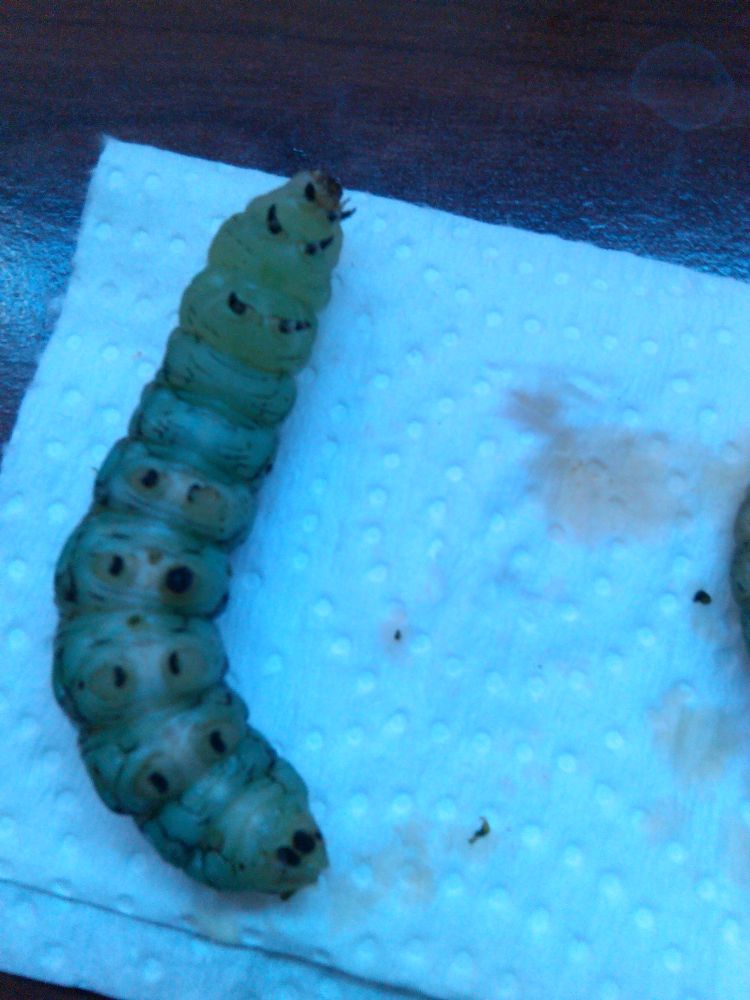 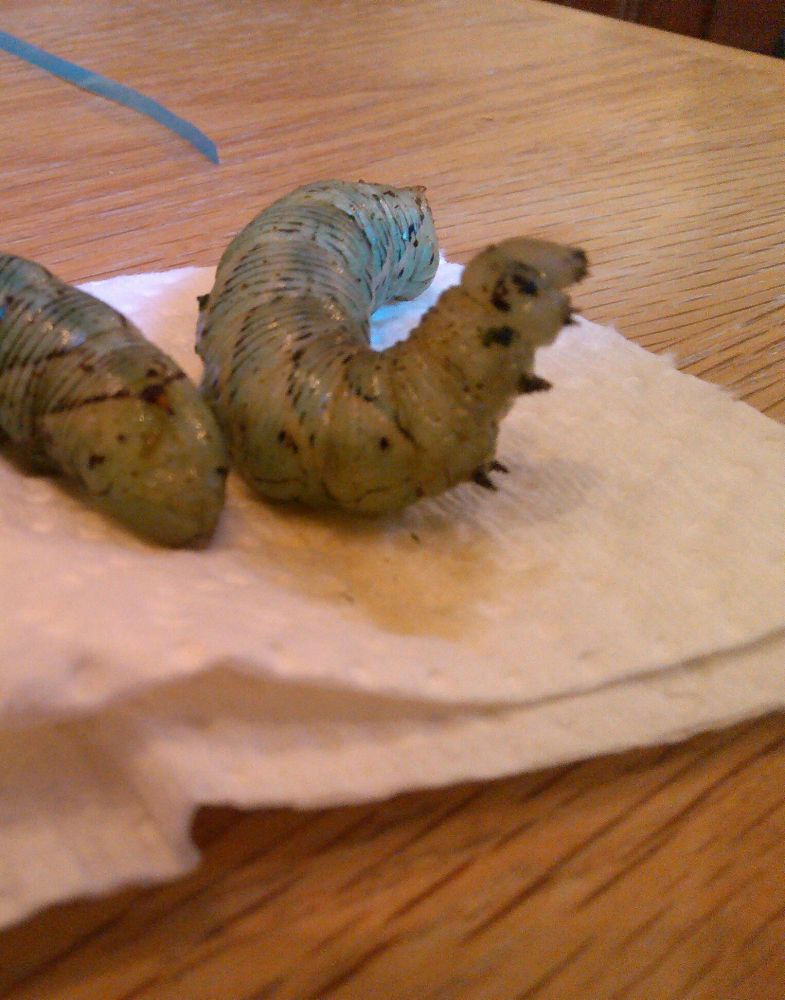 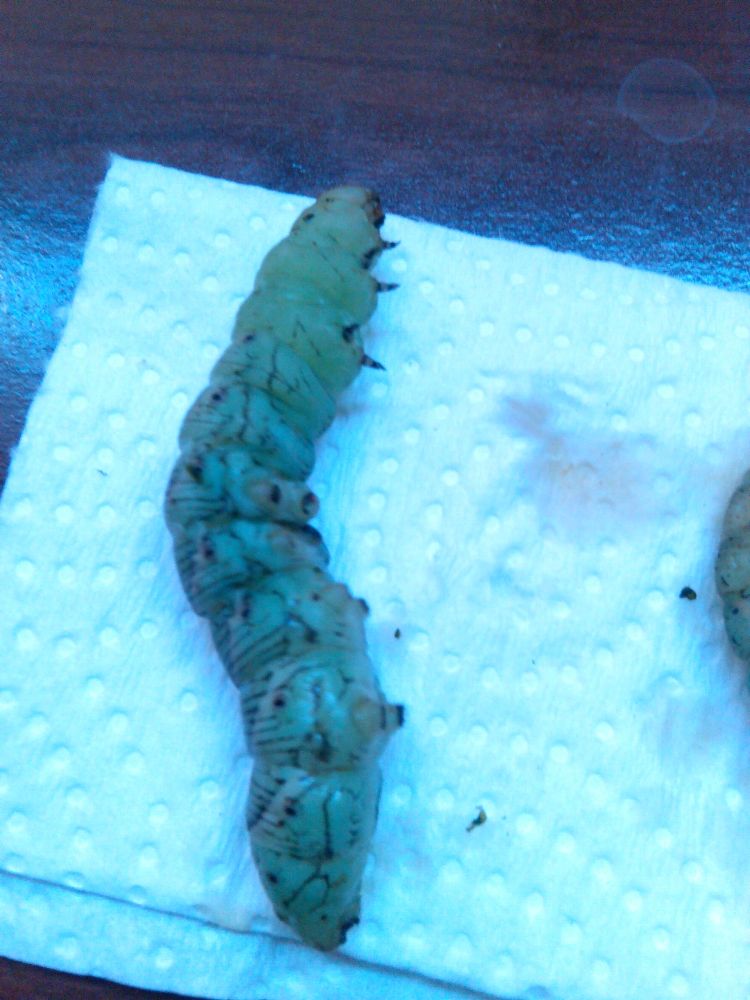 I don't know about anyone else but I have had a few turn that way when I get the 12-15 cups. It's usually once they run out of food and are getting ready to pupate.

Original Poster
They had ample food in the enclosure in the store and they had food in the cup as well. One of them died literally the next morning. Have any of the ones you've had ever had the dark spots? I know it's hard to see them well in the photos but, they both have them on their heads, one more than the other. The one has a large one on its back and they both have them on their legs. It almost looks as though their legs have been partially burnt off. They can barely even stick to things, it' as if their suction cups have eroded, haven't climbed barely at all.

Original Poster
The end result of these hornworms, checked the cup and they were dead in this foam. I assume it is the same liquid they were secreting the other day. Nobody knows why? 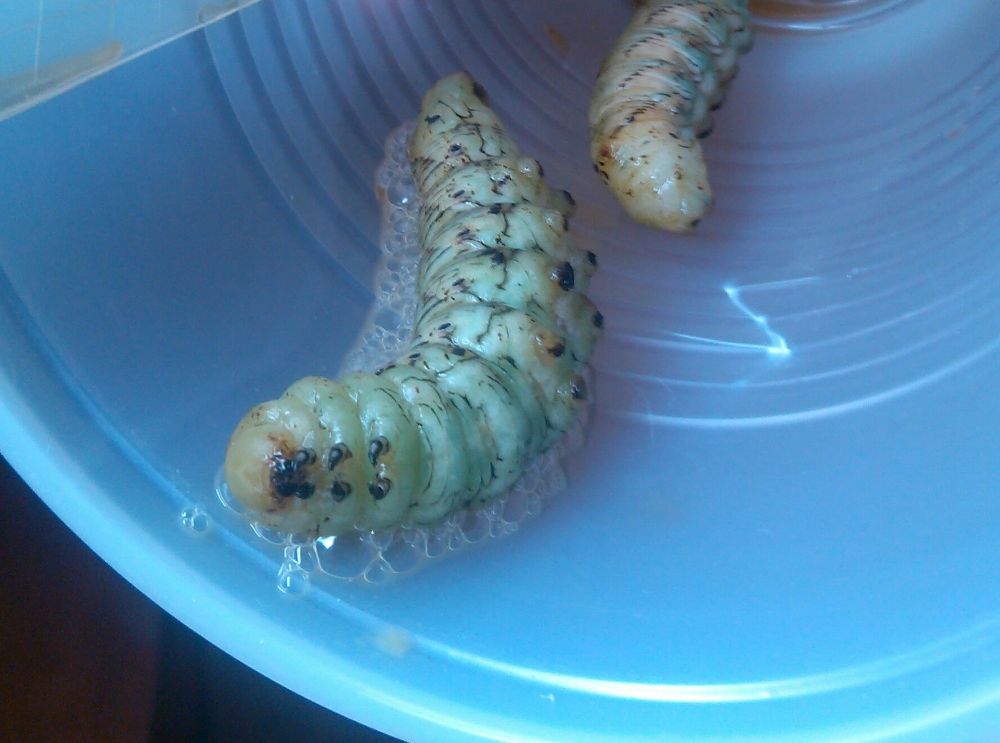 They were probably in the dying process as mine were when that color, not sure why. Maybe they got too hot during shipment and it took them a few days to actually die.

Original Poster
That is possible. They all seemed to be fine at the pet store, one did die the next morning but, the rest didn't die for almost a week. Do they usually get black blisters on them and secrete foaming liquid when they die? I've never seen any of them do that before. It always worries me that it made my dragon vomit, which I have never seen him do before.
A

Yes, I've seen the little black spots but not the foam. I wonder if you email a hornworm breeder to ask they might be able to have an idea.

Big Als is usually pretty good with their animals (feeders included). I would call them and ask for the manager to let them know what happened. We ran into a problem with blood worms a couple of years ago and they were really helpful. The problem was a product issue not a store issu but they were very helpful.

Would you share which Big Als you bought from. If your don't feel comfortable online can you PM me.

SDragons":2de9p947 said:
Big Als is usually pretty good with their animals (feeders included). I would call them and ask for the manager to let them know what happened. We ran into a problem with blood worms a couple of years ago and they were really helpful. The problem was a product issue not a store issu but they were very helpful.

Would you share which Big Als you bought from. If your don't feel comfortable online can you PM me.
Click to expand...

It was the Hamilton Big Al's, the only one that is actually individually owned and managed. They are actually able to purchase supplies from many vendors that traditional Big Al's stores do not have access to. I considered emailing them but, to be honest, I completely forgot until I logged in here. I think I will let them know, though it was a couple of weeks ago now, I still have the pictures.