My baby Rango is almost 3 years old and has been extremely healthy his entire life so far! He goes to the vet at least 2x a year for fecals and deworming if needed. Husbandry is perfect. He’s a happy healthy boy (a bit big, 700g and 21 inches).

Two weeks ago he had a blood clot on the end of his urate, he was totally fine otherwise - eating, basking, being totally normal. I took him to the vet and they did blood tests. His test showed he was not actively bleeding inside and we assumed maybe it was the pinworms or nyctotherus which were found in his previous fecal bothering him so they decided to deworm him with panacur. We sent out a full CBC and when i was done the deworming I brought back another stool sample.

The full cbc and stool sample came back this week.
The stool sample showed he still has pinworms/nycto so the dewormer didnt really do anything...

The CBC came back with a few things high
- packed cell volume: was high at 64 (vet said normal is 26-48)
- elevated uric acid (don’t know exact numbers)
- elevated CPK
- everything else was totally normal

the vet is not worried seems to think he is dehydrated (I don’t soak him or have water dish in his cage, a few times he choked on water so I just was giving hornworms and very wet greens) he’s not showing signs of dehydration his skin elasticity is good, eyes are good, I started bathing him the past two days and he doesn’t wanna drink just swim around and play. He’s eating his greens and hornworms. Acting totally normal, maybe gaping sometimes when not basking but I also am paranoid and have been keeping an extra close eye on him and also bothering him most likely lol.

Now I have another theory - I feed him PRIMARILY dubia roaches. He gets about 10 roaches or more 3x a week (total of 30) with some other feeders mixed in but still dubia roaches. I had no idea about their high uric acid!!!!! I am now stopping dubia for the time being and also moving to 2x a week bugs.

But I’m thinking the dubia might of caused the high uric acid? And that in turn maybe caused the pack cell volume? His stool right after the bloody stool had crystals in it (I know associated with uric acid) I had absolutely no idea this could happen from dubia until I did some research!!!

He seems totally normal, happy, healthy, no swelling or signs of gout but I really let my mind get the best of me, he’s like my child.

I’d love your thoughts on this, vet wants to recheck levels in a month (once we get the crypto and adeno results back). Is there anything I can do other than hydration, less protein, leaner proteins and cutting back on dubia roaches?

I am an absolute paranoid mess and obsessing over this.... hes my child... any thoughts would help. Vet didnt seem concerned (in her voicemail before I called back she said "I didnt find anything alarming"... but my anxiety is getting the best of me here.
Last edited: Jun 9, 2022

I will be emailing you, as I did get your email recently!
So sorry Rango is having trouble, poor guy. Can you get a copy of the blood tests, by chance &
email them to me & you can post them here so everyone can see also.
Yes, the dubias are naturally high in uric acid. What foods do you give the dubias prior to him eating
them, any type of dry food or mainly vegetation?
For now, as you are doing, it would be good to continue reducing his dubia intake & try to switch to
maybe crickets or silkworms, or even a few superworms are fine.
Have you started him on black or tart cherry juice extract to help with his kidneys?

I will be emailing you, as I did get your email recently!
So sorry Rango is having trouble, poor guy. Can you get a copy of the blood tests, by chance &
email them to me & you can post them here so everyone can see also.
Yes, the dubias are naturally high in uric acid. What foods do you give the dubias prior to him eating
them, any type of dry food or mainly vegetation?
For now, as you are doing, it would be good to continue reducing his dubia intake & try to switch to
maybe crickets or silkworms, or even a few superworms are fine.
Have you started him on black or tart cherry juice extract to help with his kidneys?

Thank you so much for getting back to me!!! You are the best!

So I was not feeding the dubia. I was getting them from aafeeders and it had the little pellets in it and I was just feeding the dubia right from the container they gave me without gutloading - i won’t do this again I bought some bug burger - I guess I thought the food in the roach container was good.

I can get a copy of the blood tests for sure!

I bought a ton of crickets, silkworms, and BSFL they should be here today or tomorrow so I can get him off dubia. I have also been giving hornworms to help with hydration. I’ve been bathing him but he doesn’t really want to drink in the bath.

I have not started him on any of those yet but I will purchase some!

He is totally acting normal though, eating, basking, he hasn’t had any blood in his stool since that first day a few weeks ago. Then a few days later passed stool and there was almost a second urate that was all crystals. Since then it’s been perfect!

I’m a very anxious mom though it’s been hard for me hearing the blood tests were not perfect.

What could cause the elevated PCV (packed cell volume) could this be related to high uric acid from dubia as well?

Thank you I’ll post results here whenever I can get them from the vet!
T 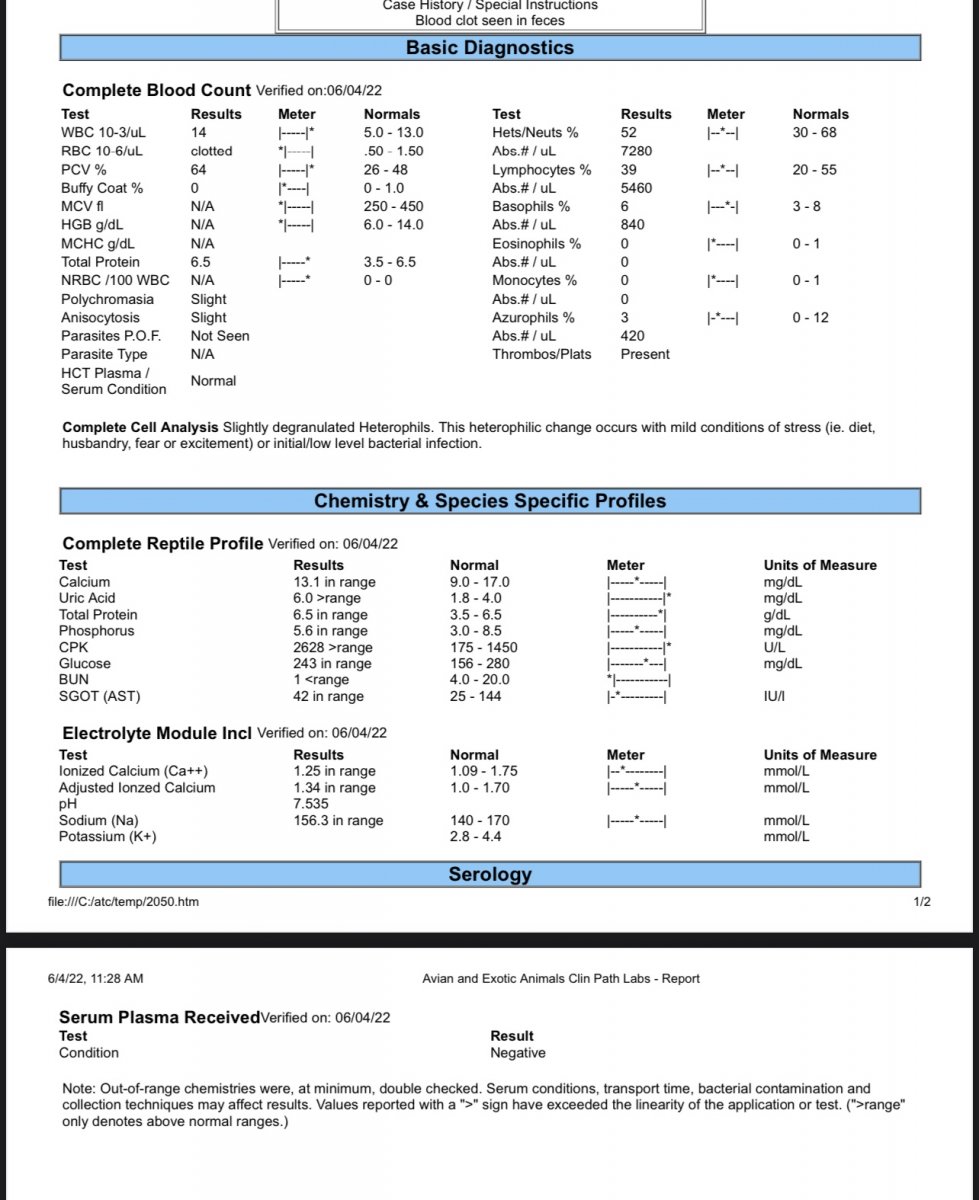 Thanks, how is he doing?
I am not sure what kind of feed comes with the dubia but it's probably fine. I would use an organic
dry feed, non gmo for a higher quality food.
It sounds like he will have a good insect variety now, hopefully his appetite will stay good.
The uric acid levels are not bad. That alone can cause variances in the white blood cell counts &
contribute to inflammation too. The AST (liver enzymes) are normal, thankfully so no problems
there. Anytime there is stress involved, it can cause some elevations in cell counts because the
immune system is more taxed than normal. I think the uric acid levels should go back down to
normal. You are seeing the urates improve so that is a good sign!
The calcium to phosphorous ratio looks fine!
Keep working with him to try to get him to drink either from a bath or from a dropper. The hornworms
or silkworms are good for moisture. Be sure they aren't too large though.

angel_zynn
is my bearded dragons left side supposed to be hard, it’s right above its left leg in the back, it’s kind of hard? i feed it insects and greens. not sure if it’s normal or not? i can post pictures.
Thursday at 7:34 PM •••

ds_1771
His first vet visit went well! Abelardo Texas looks good physically according to his new Dr.
Unfortunately, on the fecal it showed that he has Coccidia. Not a surprise honestly... he has been having diarrhea since I got him. I got Albon, F10, and a steam cleaner on hand.
I'm kinda freaked out, I heard coccidia is a beast to get rid of. Wish me luck!

Smaugthebeardy
Sorry didn’t mean to post the last post was an accident, but I do have a question I have a 7 month old dragon, her name is Smaug and she will not eat her salad I have tried everything that I can, just wondering if anyone can help me because I’m stuck and I know that she should probably be eating them by now! If anyone can give me ideas that would be great!
-mia
Thursday at 4:49 PM •••

Smaugthebeardy
Hello
Thursday at 4:46 PM •••
T
tahaabdulghani
Hello there I have Created a websites
Check and rate it Wearglam USA
Wednesday at 2:15 AM •••