Staff member
Moderator
I had a sobering reminder this evening just on how quickly things can go bad, and the importance of being prepared and knowledgeable on the creatures you are keeping.

Tonight everyone was getting their bath. I forget at times just how much smaller Moro is than Tombo, and I had placed Moro in an amount of water that should have only been used for Tombo, and not her.

Everything was fine, she drank a lot, and then did her normal splish-splashing about.
But everything went bad in the scope of a few seconds.

Moro had completely ducked her head under water, and did a furious thrashing about, all while her head was submerged. At first I figured the violent throw was to shake water out of her ear or something, so I wasn't alarmed by it. But then, she went under and did it again.

I immediately picked her up, and she shook her whole bodily very violently from side to side again, while in my hand. Now I knew something was wrong. And things went downhill VERY quickly.

After her final thrash, I could tell she was struggling to breath. Her mouth was open and her beard inflated. She was pushing hard trying to expel the water she had aspirated.

I held her body downwards to help drain any water that might be in there. She continued to struggle, and bubbles started to form around her mouth. All this has happened within 30 seconds of eachother or so.

Then she started to go limp...

Her head started to lower, her legs lost strength, and her eyes started to close. She went completely limp. No life at all, eyes shut, gone.

My heart sank as I was watching this unfold in my hands.

I angled her almost completely vertical, face down, and shaked her side to side, hoping I could dislodge any water in her lungs, and allow it to drain out so that she could start breathing again. Nothing happened. I tried again, nothing happened. I palpitated on her chest a few times, and her mouth opened wide, her body puffed up, and she started struggling again to breathe.

Her eyes opened up, her body stiffened back up under her control, and she started fighting to breathe once more. After a few minutes, she had closed her mouth, and was breathing very hard, but she was alive and could support her own weight. 5 minutes later, her breathing had softened up a bit, and she wasn't struggling as much. Once her breathing was back to something semi-normal, I put her back under her basking spot.

An hour or so later her color lightened back up, and her breathing calmed down.
And 3 hours later, as I am writing this, she is roaming around her tank just as she was before the incident.

Few important lessons here for everyone.

Accidents can happen, so you should be prepared with as much knowledge as you can before something happens. I have given dragons thousands of baths over the years, this is a first.

Only allow your dragon to bathe in an appropriate depth of water. This was my big mistake tonight. And a sobering reminder that no matter how long you've been doing something, how many times they've gone right, that an accident can still happen.

Wow what a frightening experience---- I am glad she is ok and do you think it traumatized her? I hope she is better today and it did not traumatize her--- I guess I would be bathing one at a time from now instead of trying to do two-- I know Hiccup does not like baths but has come to the conclusion hes gonna get one anyway -- I have never experienced them w/ them putting their heads under water-- Hiccup is too busy trying to run away from it rather than just relaxing and let the warm water run over him --- he does pancake out tho -- but good to hear that she is ok
Karrie

Staff member
Moderator
Original Poster
Oh yeah they weren't bathed together, I always do one at a time. I just meant that I only filled the water once, and I did it to what would be suitable for Tombo, not even thinking that Moro was much smaller.

This morning she was awake and alert. Last night before lights off she was very alert too so all is good.
I haven't had much chance to interact with her since, so I dont know how its affected her as far as trust or being traumatized.

That must have been frightening for both of you! Thank you for sharing your story, and I hope Moro bounces back quickly.

Had a similar but not nearly as scary thing with my Devlyn dunking her own head underwater. I stopped her, but at the time I did question if I was being overprotective. Your story makes me glad I was right there watching and didn't let her continue

Staff member
Moderator
Original Poster
Thank you both for your comments. she ate normally today and did not act scared when I went to pick her up. She really acted no different than how she's always been, a sweet calm girl.

Not out of the woods yet as respiratory issues can still pop up after an incident like this, but so far so good.

All I wanted to do today was come home from work and hold her so she knows she's loved.

On a positive note, I do think in a weird way it spurred a deep kind of connection between the two of us. I definitely feel more emotionally attached to her now.

I'm so sorry that happened to Moro, poor thing! It definitely goes wrong quickly sometimes,
& like you said you do have to act fast!
I'm so happy she is alright & essentially back to normal.

I'd say her behavior is back to normal today. Shes such a sweet calm girl, doesnt seem like anything will ever change that in her

Staff member
Moderator
It's so stressful when accidents happen like that. I'm glad you were there and could help her right away and I'm glad to hear she is OK =).

OMG! Poor girl! I'm so glad you were able to rescue her so quickly and that she's okay. My eyes just kept getting wider and wider the more I read your post, but so glad the ending was a positive note! And thank you for that very alarming and sobering story. Makes me think I'm not as overprotective as I've thought!

Just an update for anyone not following Moro's thread, She is doing good now and is completely back to normal (she has been actually for awhile now).

I don't know if it's in relation to the bath incident, but I do notice now that when she eats, she tends to hold a lot of food in her throat now, where as before she would swallow it right down. After feedings now she looks like her head has doubled in size just because she's stored so much food in her throat.

Other than that, she's back to her normal sweet self 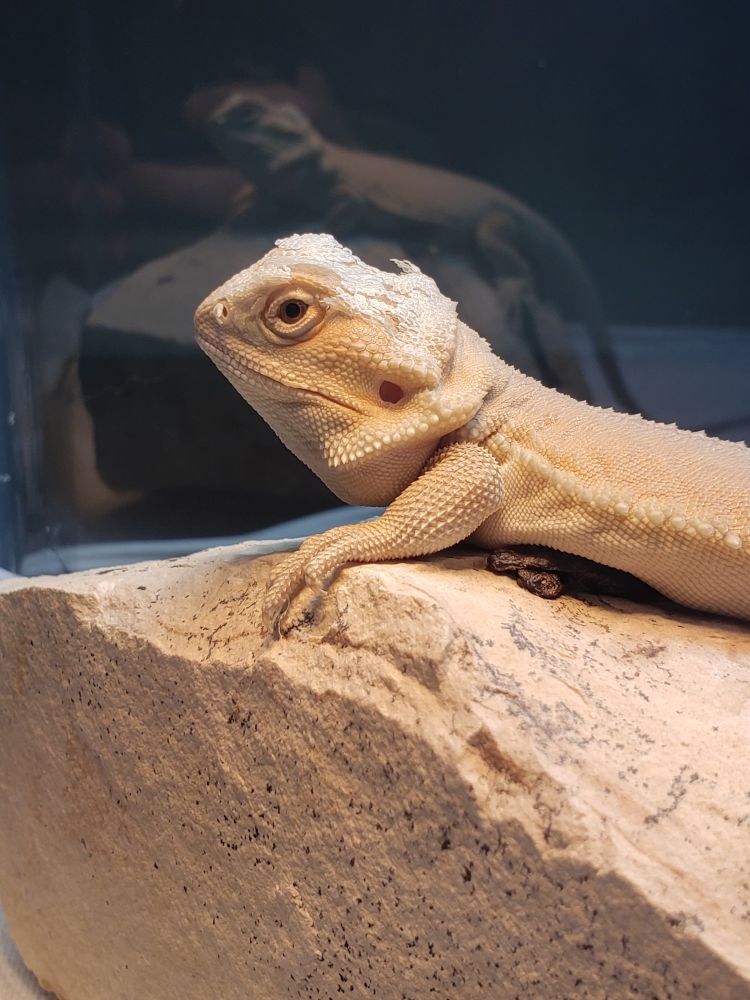 Glad to hear that her water scare turned out alright ! And yeah, some of my guys will have a bulgy throat while eating, others never do. Strange little guys. Of course with a younger dragon it's still best to be sure the food items are pretty small.
K

Exactly how much water is too much? How many inches deep was it? I just want to be careful with my dragon. I am glad that your dragon survived!

Staff member
Moderator
Original Poster
It wasn't inches, it was more like half - 3/4 of an inch.

She is just a little juvie so the amount of water will depend on the size of your dragon.
Honestly, they don't need much water in the bath.

She is just a little juvie so the amount of water will depend on the size of your dragon.
Honestly, they don't need much water in the bath.

i see. thank you.