It has taken me many weeks to find the strength to post this memorial for my Rygel. I had to have him put to sleep on August 9th. It would have been his third birthday on August 12th. He died so young. I don’t know how to write a memorial, or what’s the “right way” to do these kind of things, so I’m just going to write a bit about his life, and death, and share my memories of him with you all.

Rygel had been “not quite right” for almost a year before I could no longer take that nagging worry that something was wrong, that I wasn’t just being an anxious beardie mom. Over the past months, the signs were very subtle and so easy to explain as being nothing to worry about. A slightly diminished appetite was “just him slowing down because he’s not a baby anymore” and a slightly black beard was “just him being grumpy”. Rygel was my first bearded dragon, and I wanted so much not to be the neurotic beardie mom that panics over the slightest little thing. But now, looking back, I can’t help wondering “what if”. What if I’d taken him to see a vet a year, or six months ago? I know in my heart that even at the end, they didn’t know what was wrong with him, and any course of treatment they followed was ultimately a desperate attempt to DO SOMETHING. Even a necropsy report has been unable to offer many answers - all I know for certain is that somehow, Rygel developed an infection that spread through his entire body and caused massive sepsis. There was nothing they could do, and even though friends, family, expert veterinarians and the wonderful members of this community have assured me I did no wrong, I still feel a terrible sense of guilt and failure that I couldn’t save my little guy.

Rygel was my first bearded dragon. I got him during a time in life when I was struggling to cope with a difficult relationship with my father, and manage the challenges of running a business that was going through a tough time. I remember the day I decided to get a bearded dragon as though it was yesterday. It was a Sunday, and I’d just ended a difficult phone conversation with my father. My dad suffers from paranoid schizophrenia, and when he’s going through an “episode”, he can be a challenge to cope with. After ending a difficult call with him, I cried and cried because I felt so helpless and defeated.

Somehow, that led to me deciding I needed to find something in my life that was exclusively for me, to care for, love and nurture, and with the support and encouragement of my husband, I began a journey of learning and hope to find my very first bearded dragon. It took many weeks of research before I felt ready, but finally I felt that it was time and I contacted a breeder.

The night before my baby was due to arrive was agonising. I checked the cage temps every hour, I read and re-read every bearded dragon care sheet I could find, and I obsessed over every tiny detail of his setup and care. On the day of his arrival, I got up at 5am (!!!) Just in case he was delivered early. When the FedEx guy finally showed up at 11:30, I practically yanked the door open and scared the poor FedEx guy half to death.

At around 12” from nose to tail tip, and about 10 weeks old, Rygel was tiny, and beautiful. He was named Rygel after the character of the same name in the Sci-fi TV show, Farscape, as my Rygel shared similar facial expressions, and to me, they both looked kinda similar and shared a similar personality. 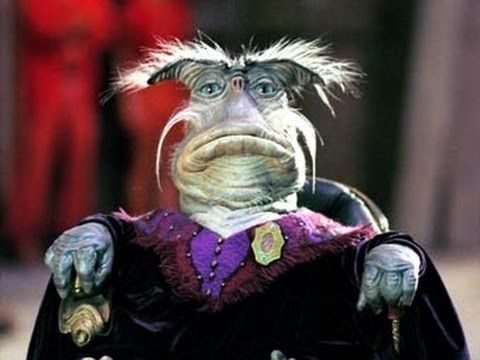 Every night from the day I got him, Rygel has had a nightly cuddle. Wrapped up in his blanket, he’d do the beardie wriggle and snuggle deep under the cover. He enjoyed me rubbing his back through the blanket. I only ever forgot his nighttime cuddle once, when I’d gone to bed early because I was unwell, and in the morning Rygel was still up sat waiting for me, with a very unhappy beard. We watched cartoons and listed to his favourite songs all day as I tried to make up for my forgetfulness. I felt so guilty!

I was determined my baby would be socialised and as friendly as those I’d seen here on YouTube, so during his first year, I spent hours singing to him, talking to him, and carrying him with me around the house. We watched TV together , read together (sometimes I even read to him) and I made up stories. The story was a silly, ongoing saga about a big scary dragon that was loved by everyone in the nearby village and got to eat lots of yummy dragon food and had many gifts.

I was surprised by how many people loved Rygel. My assistant had a terror of lizards when I hired him, but after hearing many stories of Rygel’s adventures, and seeing many cute dragon pictures, he became a devoted fan. Other people that had never touched a reptile before wanted to hold and cuddle him, and even have their pictures taken with him. Rygel loved the attention, and I often worried I would be responsible for people getting a dragon without being prepared, so I always gave them a long talk about how Rygel wasn’t a cuddler right out of the box. He took time, love and consistency to be who he was.

To me, Rygel was perfect. There was nothing Rygel could do that would ever annoy, frustrate or irritate me. Even cleaning up his poo was fun, because Rygel looked so desperate for me to get rid of it. I couldn’t help but smile at him, huddled as far away as he could get, and giving it the good old stink eye.

Rygel was a mommy’s boy. He hated daddy, and would stink eye whenever my husband so much as looked at him. I teased my husband that he should not have called Rygel “a rock” when he was a baby.

Rygel loved being outside in the sunshine, his favorite thing was to climb up as high as he could and bask. He also learned that this was an ideal time to poop, and soon had me trained so I would hold him over a flowerbed whenever he wanted to go poop.

Rygel rarely ever showed aggression or black beard. I remember the first time i saw a full beardie black beard, we were outside sitting in the sunshine on a lovely hot day. Something overhead stirred some branches, and they spooked Rygel quite badly. His beard puffed out and went totally black and his mouth was gaping wide. He did actually look quite scary, and I congratulated him on “telling off those naughty trees”.

He was a fussy eater, and quickly refused to eat his roaches. But he loved his Phoenix worms and silkworms. He sometimes got so excited he’d just stick his tongue out without even waiting for them to be close enough to eat. Later, he learned mummy was a sucker and if he didn’t want to climb off his basking perch, that was okay because mummy would hand feed him his worms if he stink eyed her. He always chewed his bugs so thoroughly. I think he enjoyed making me cringe when he bit into an especially juicy hornworm. 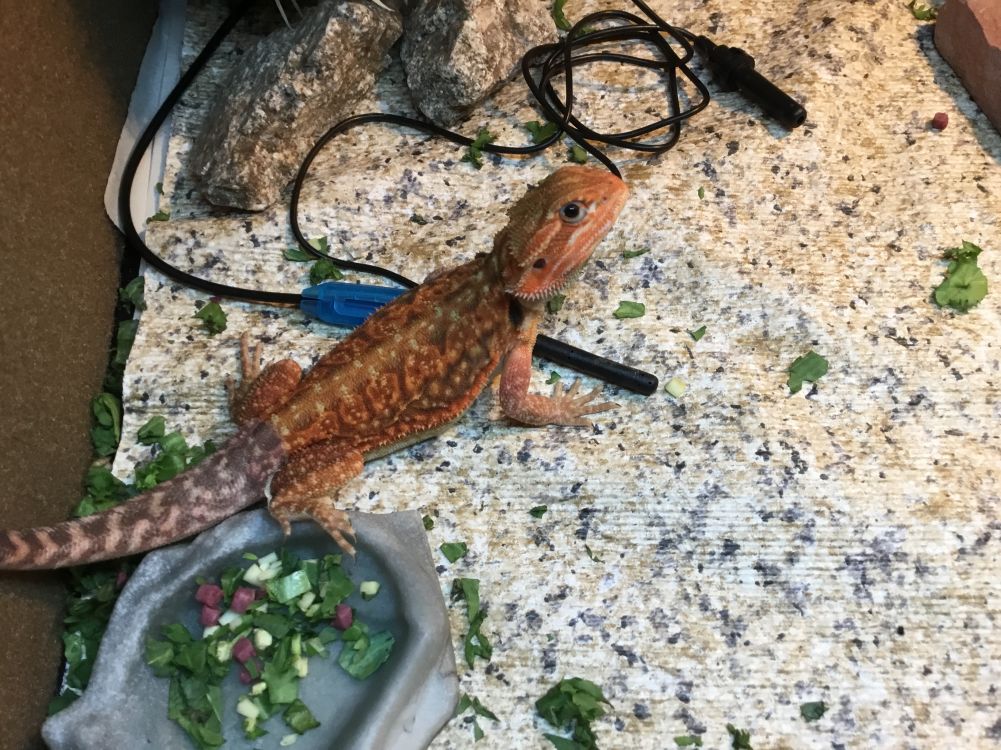 He was pretty good about eating his salad, though under no condition was I ever permitted to actually witness him doing so. I got quite good at standing nearby so I could sneak a look at him chomping down on his greens. Most of the time though, he waited until I was not in the room. Then, the only sign that he’d been near his salad dish was the incriminating scatter of greens and fruit across the cage floor. Rygel liked to throw whatever he didn’t eat everywhere!

Rygel loved to be out of his cage. I had a basking spot set up next to my arm chair, with a cat tree for his basking perch, and a MVP for heat and UVB. Rygel would sit happily for hours, though on sunny days he liked to sit and look out the window. He liked to watch cartoons on my iPad, and listen to music. His favorite cartoons were The Care Bears, and his favorite music was You Were There (theme to the video game, Ico) and Sanctuary (theme to the video game, Kingdom Hearts 2), he also really loved the theme to the movie The Neverending Story. 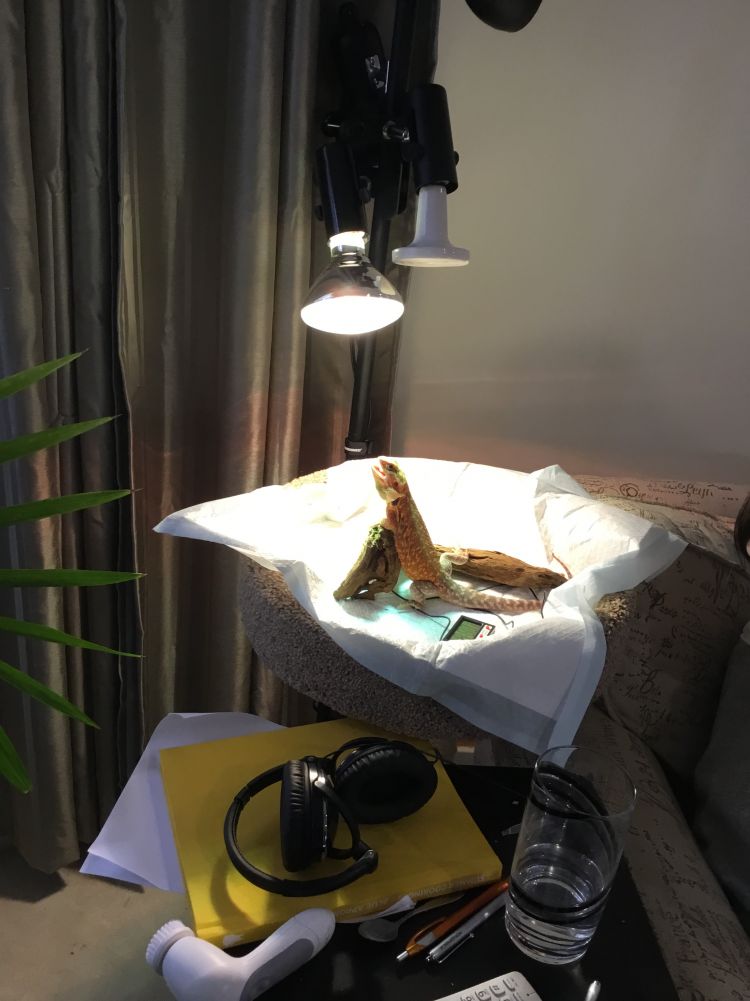 Rygel was just days from turning three when I had to have him put to sleep. In those short, precious years, I had not realized how much he actually made a difference to my life. Rygel became a point of security, a constant companion during difficult times with my father, and other stresses. Only after he was gone did I realize how often I reached out a hand to pet his beard, or rub his back, whenever I was anxious or stressed. I hadn’t realised how much of a support Rygel was, but now I realize he had become my emotional support dragon.

I miss him terribly. Every day I think of him. Every day there are reminders of him. His cage has been dark and empty for weeks now, and still there are times I forget myself and glance in to check on him. I’m still waiting on the final results of his necropsy, though it’s doubtful they’ll offer many more answers. I’ve had a memorial box made for his stuff - his blankets, his bath towel, his cactus, his bathtime brush, and I’ve set up a spot in the front yard where I’ve placed a yard ornament and will place a grave marker (though he’s not buried there, as his ashes will be kept in his memory box alongside his personal things and his footprint cast). 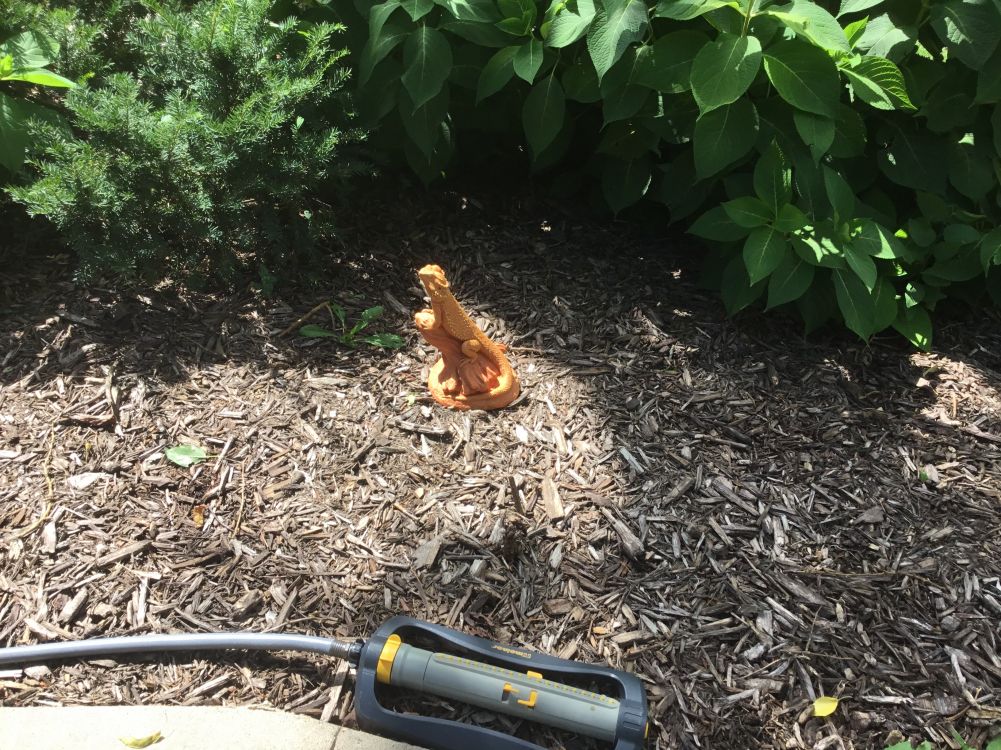 Whilst looking for fitting words to have engraved on his memory box, I found this poem that I wanted to share.

I ONLY WANTED YOU

They say memories are golden
well maybe that is true.
I never wanted memories,
I only wanted you.

In life I loved you dearly,
In death I love you still.
In my heart you hold a place
no one could ever fill.

If tears could build a stairway
and heartache make a lane,
I'd walk the path to heaven
and bring you back again.

Our family chain is broken,
and nothing seems the same.
But as God calls us one by one,
the chain will link again.

And finally, some of my favorite pictures of Rygel. I wish I had more. 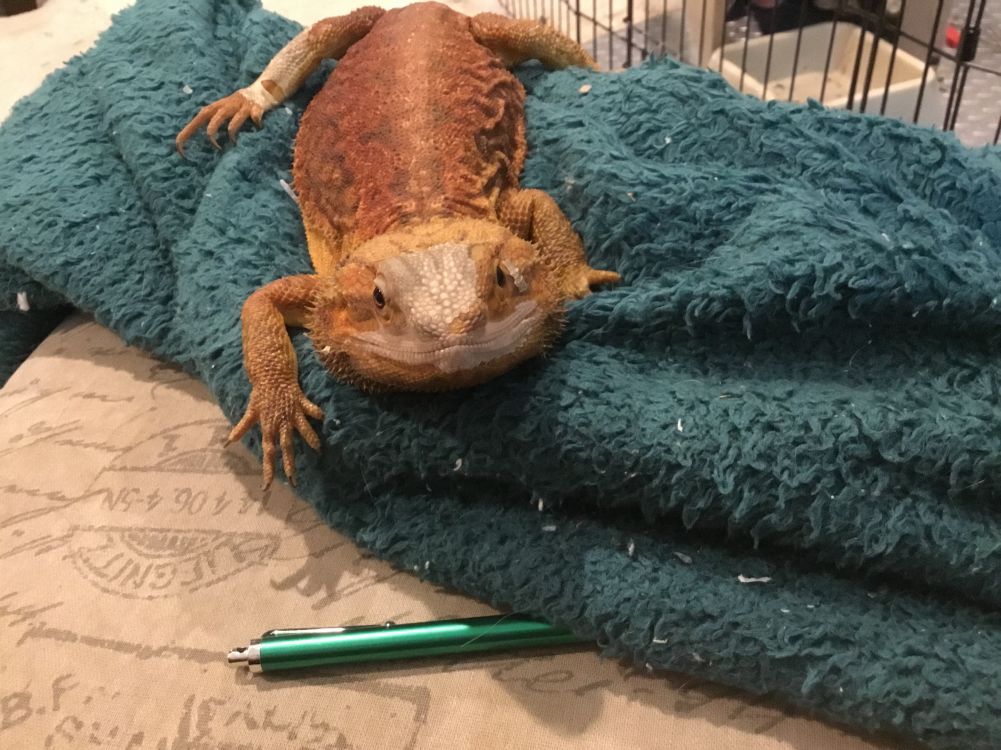 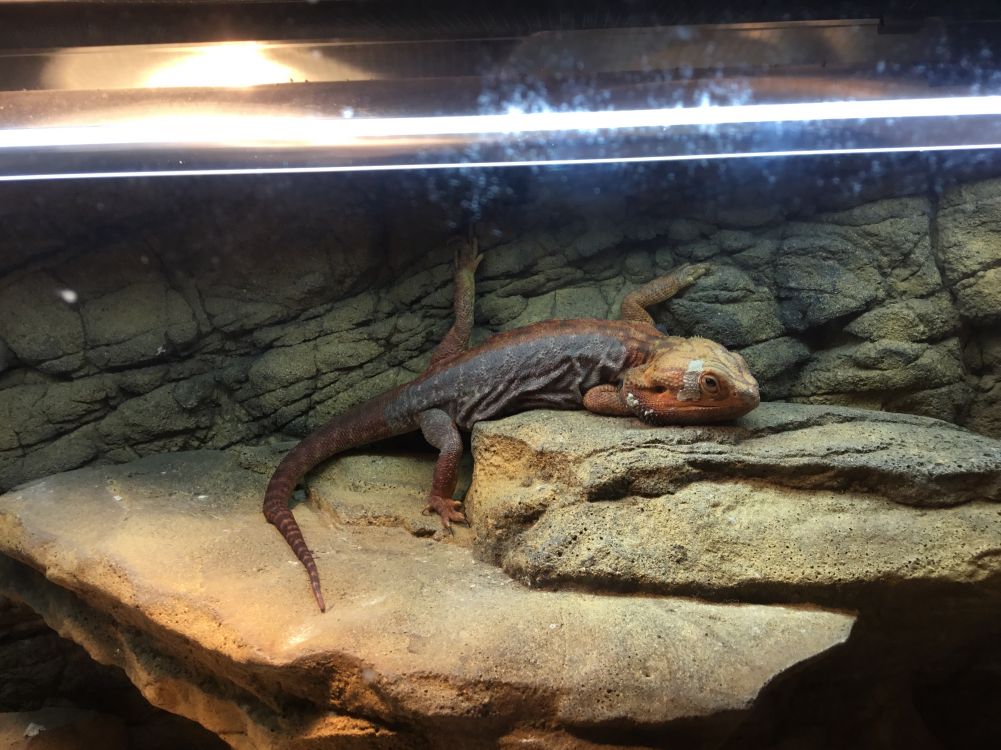 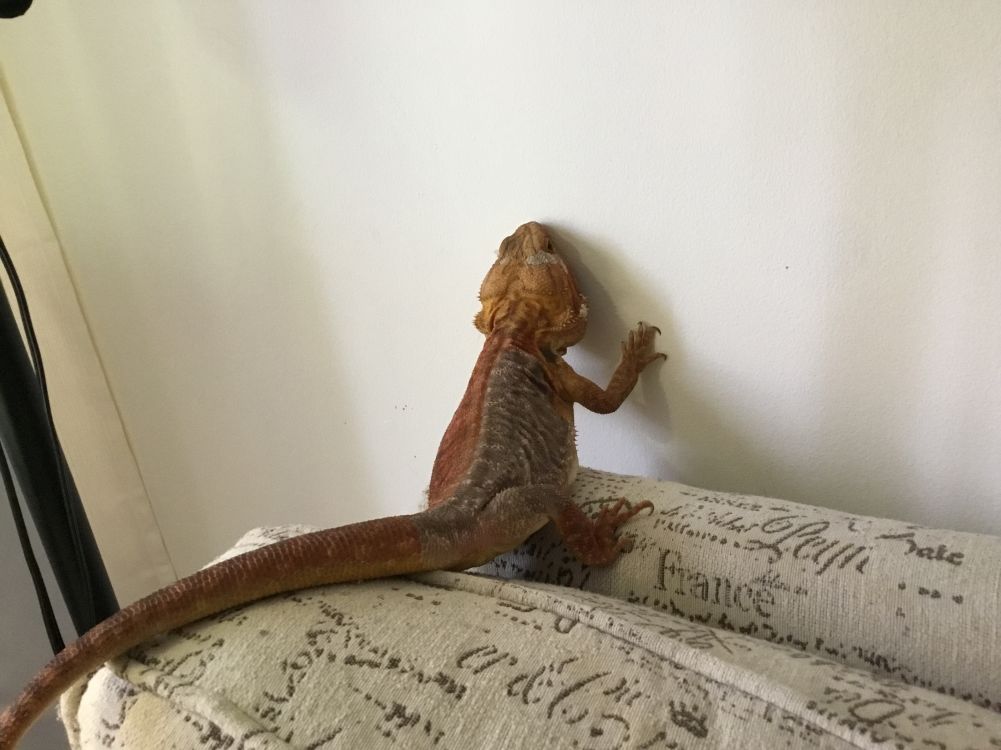 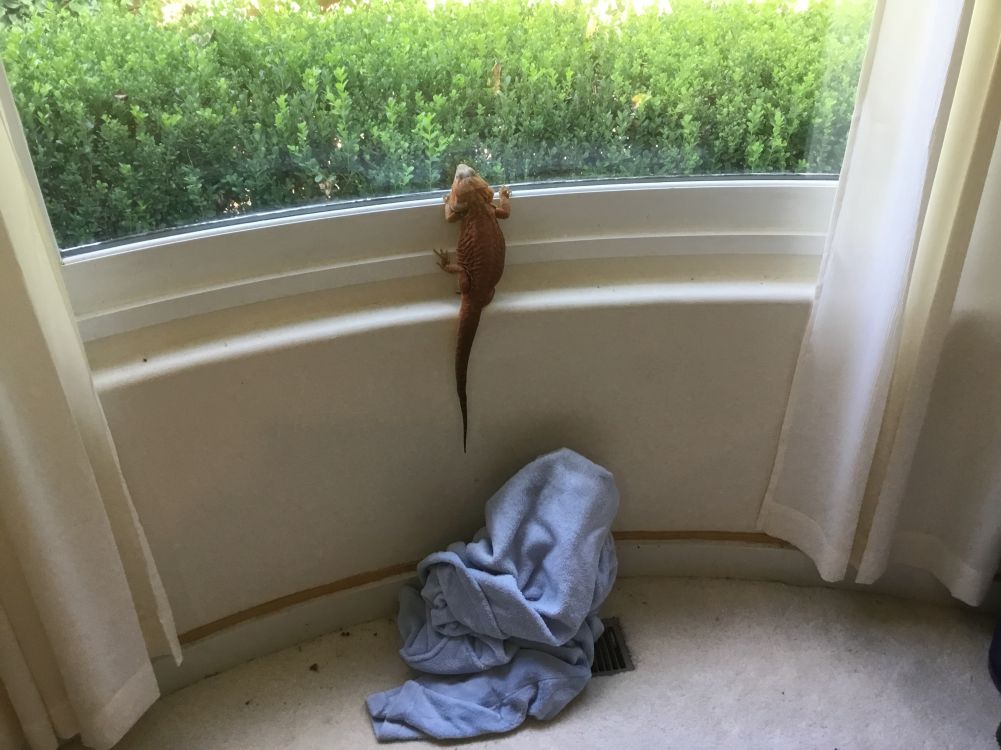 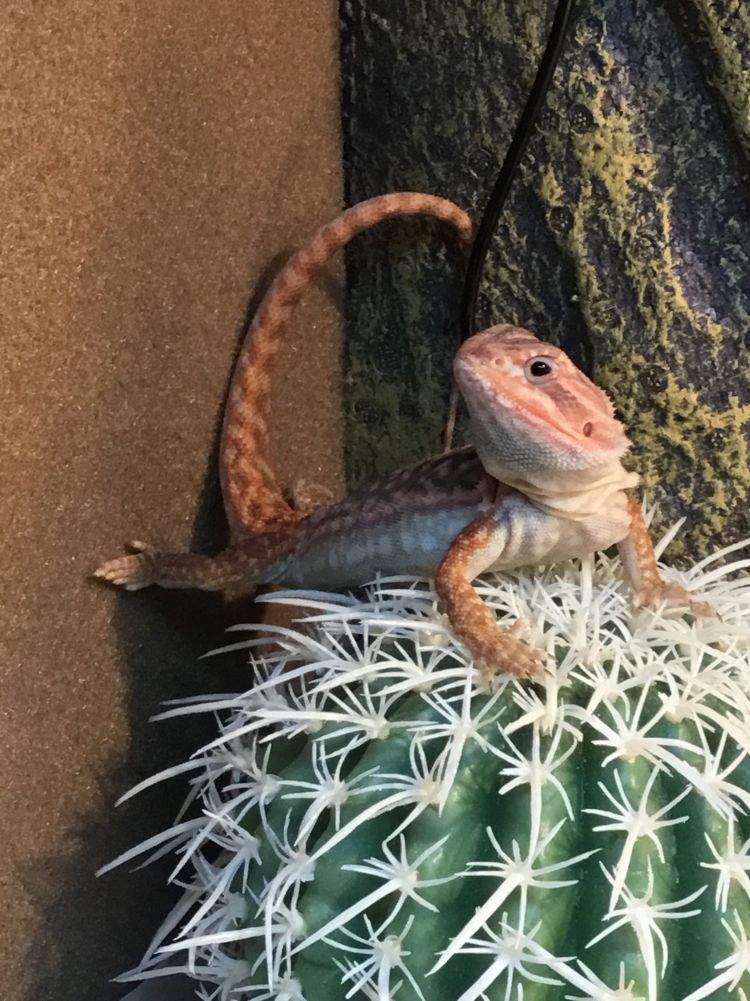 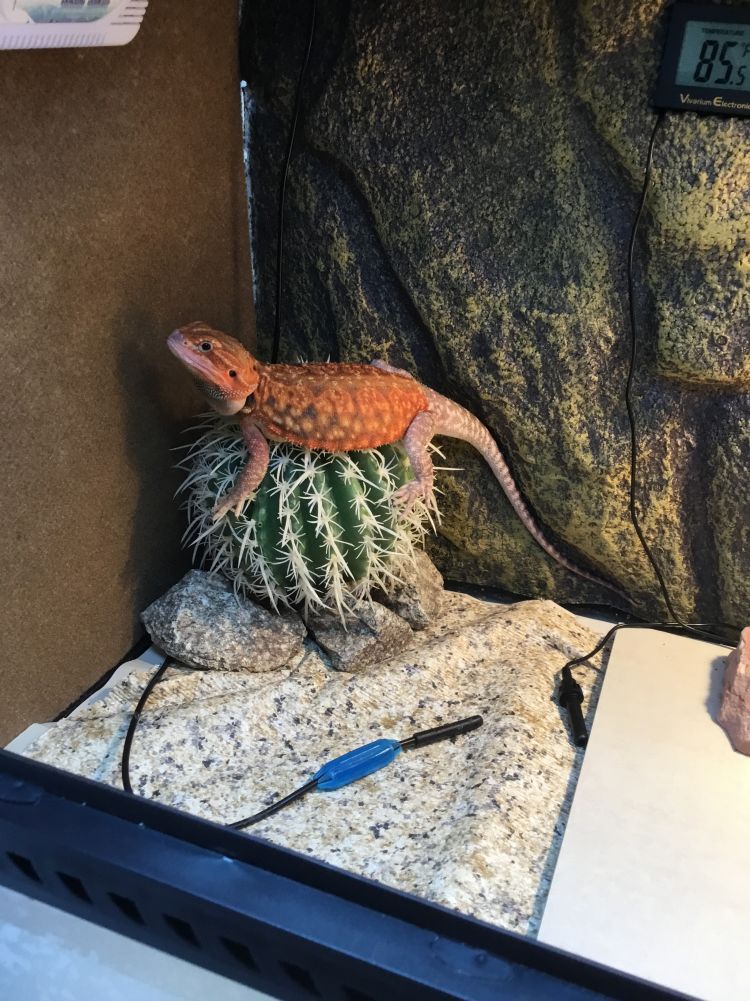 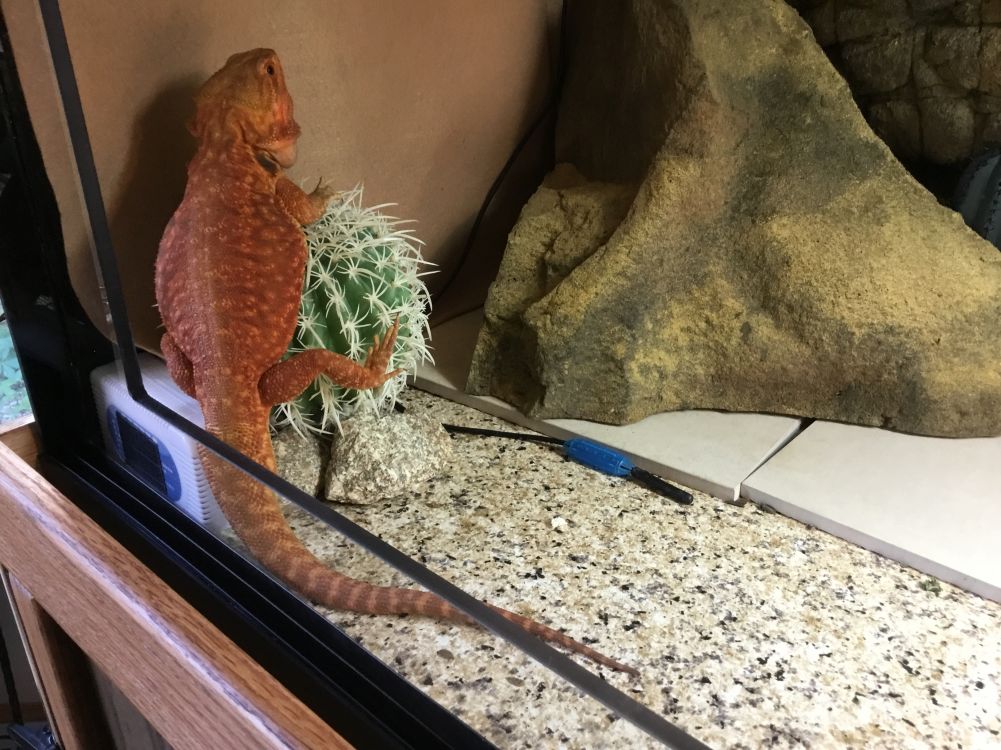 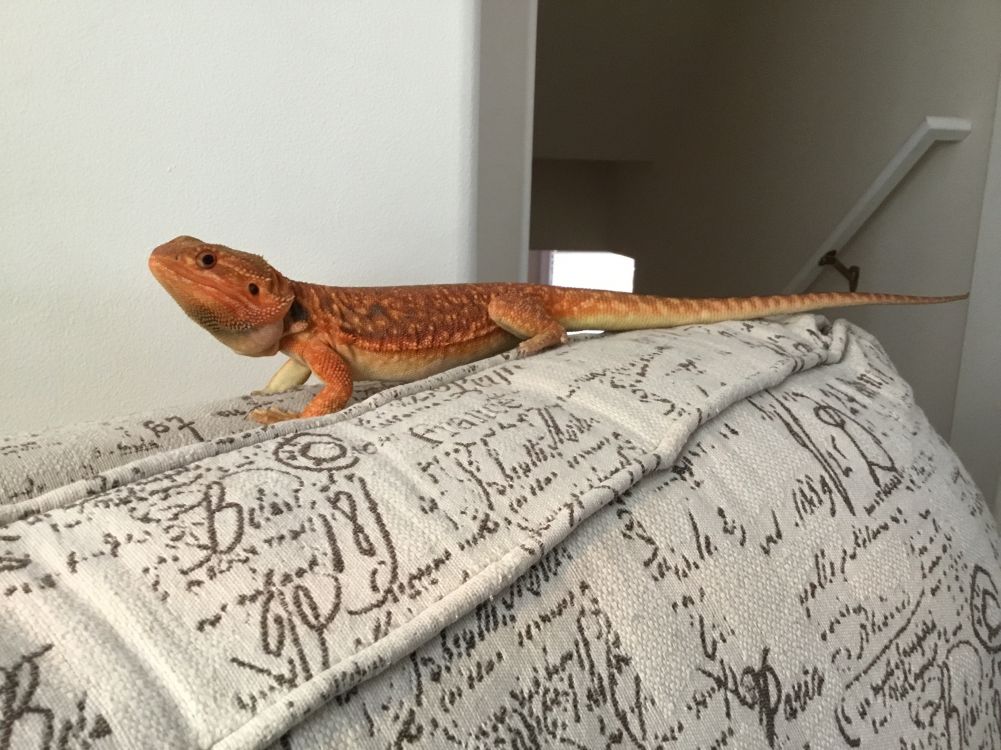 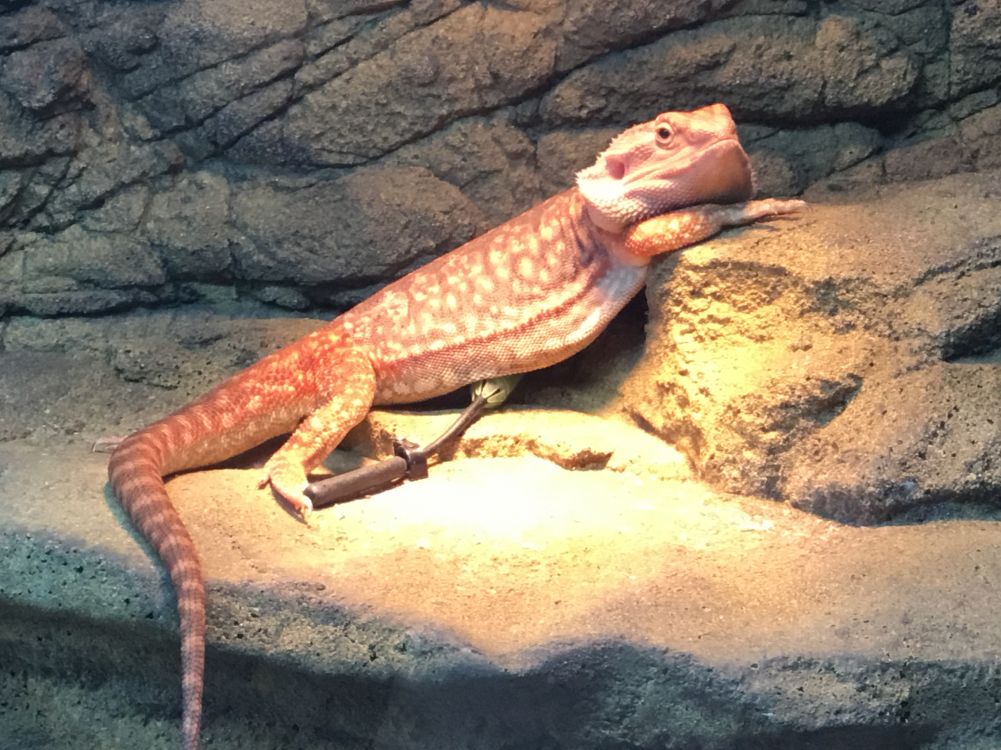 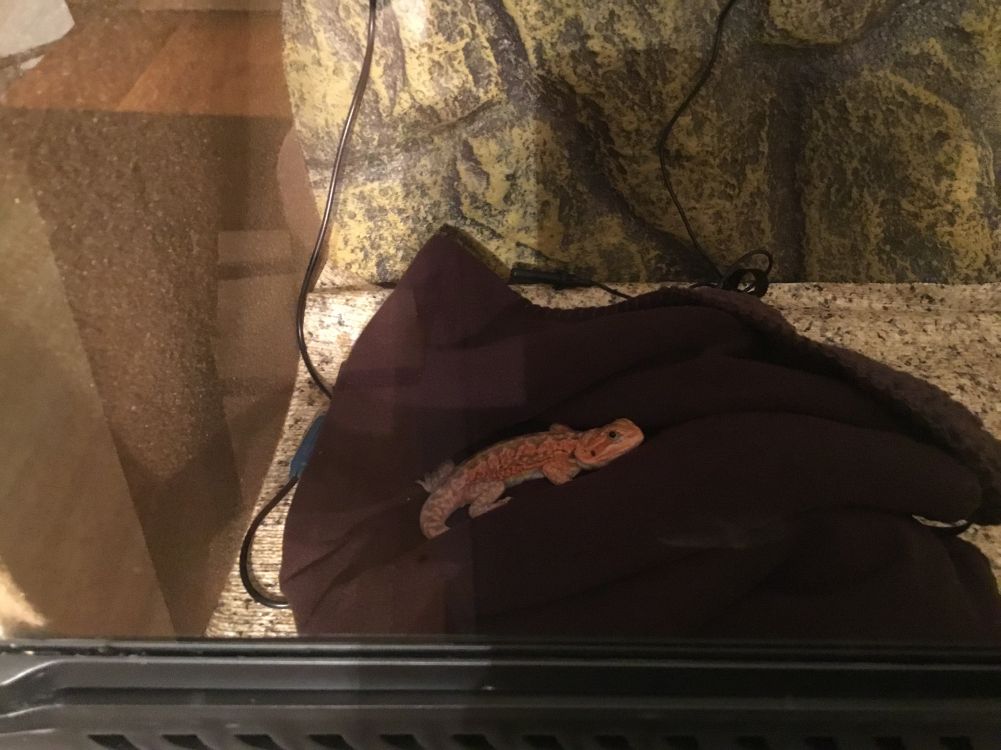 Bask in peace my dear boy, you were loved very much, and missed every day since you died.
Click to expand...
B
Written by

Brandon U.
Looking for advice and recommendations!!
Sunday at 1:16 PM •••
N
norrisjill925
In this post, we've shared some fantastic Clothing brands. They Offer Wholesale Clothing in USA.
Carhartt Clothing Wholesale
Friday at 5:01 AM •••