Deema, he hasn't been able to afford them since the day he signed up here and realized they weren't hamsters. People have offered to take them in and he considered it for the fee of $260 just for the dragons.
D

I'm aware but yelling at him obviously doesn't seem to work and it just gets you in trouble, he wont give them up and right now he doesn't have the means to take care of them, so offer something in the middle, he doesn't get rid of them completely but they get the care they need while he gets back on his feet.

Sadly this is why I quit coming here. I'm very sorry to see he's still being allowed to troll the forums.

Deema, he's been offered every solution under the sun at least twice, he's had my friend in tears wanting to save these beardies but being unable to because of the price he wants, I'm sorry but if you'd been following this troll and his antics you'd know that I wasn't too harsh and I have tried being nice to him, enough is enough. If I get in trouble I will happily refrain in the future but I had to get that off my chest.
D

I have been following, every single one of this threads and I haven't said anything because I know it was useless. Sorry that your friend cried but you have to realize he is here for hand outs and for upsetting people, you can't make him do the right thing so either try and take some sort of legal action or try to ignore it, by yelling at him and getting in trouble you are only hurting yourself, he isn't getting anything done to him that matters were you are putting yourself in a situation that might get you banned and prevent you from helping other people who will listen.

I've been on and off this forum due to people such as this, and i've spent nights crying and nights being fed up with everything human, i've been sick to my stomach with people and all the crap they do to animals because they lack the respect for them, a lot of us feel the same way. He isn't going to listen, you all tried and you all know that. Instead of freaking and stressing out over something that isn't going to change you should focus on trying to help those who will listen and make a difference in the lives of the bearded dragon who have people who care.

I stated giving them to someone for a short period because it might be something if he thinks about enough he will feel safe with doing.

Also you might want to take a step back and think of this in a different light, its not hard to google pictures all of this could be fake and I personally think everyone should refrain from giving any more hand outs, he is obviously not using them.

That is very, very well said and so true. I like you! Haha
R

There also are MANY good people on this site, obviously so because out of the kindness of their hearts are giving things away. Think about all the nice, good, responsible owners we have here, and all that we've learned from this site. The site is not worth leaving because there will always be people who were misinformed, but trying hard just like we did to get everything right. I think lately (myself included) a lot of energy has been wasted on this forum feeding trolls. If we concentrated our advice and support on people who need and want it, think of all that we could accomplish together, helping people to make improvements to their beardies lives. We're here for the love of our beardies.

Now is not the time to abandon beardeddragon.org because we still get new members all the time looking for answers. We have to unitedly pull together to #1, give advice to those who want it, and stop feeding people's boredom when all they want is to upset caring people and abuse helpless creatures.

Let's try this a different way. 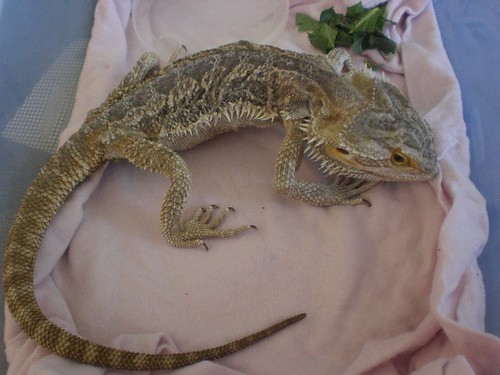 ...This is Bowser. I got him from CL from a family that had him and another dragon. Bowser didn't get fed properly, nor was he even taken to a vet prior to my rescuing him. They LET him get into this shape and then SOLD him on CL. Didn't surrender him, SOLD him. When he did eat, it was crappy lettuce and a few crickets once a week. I have had him for like, 2 or 3 months now and he is still in horrible shape. He can't walk properly, he has no balance, I have to force feed him, and he can't hold his head up longer than 3 seconds. He doesn't have the energy to walk off from his poo after he goes, so it ends up all over him and I have to bathe him all the time. He throws up what feeders I can get him to eat and he only can keep down baby food. He can't have logs or anything in his tank cuz he can't climb, and if he moves too fast, he falls over on his back and can't get back up by himself.

His previous owner didn't think he was doing anything wrong in his care for him.

Just saying. Maybe you should consider what advice people have offered.
R

Ashley, your a wonderful person for doing everything you have done for him and trying so hard. I want to remind you that at first you said you couldn't afford another beardie, but when other caring members told you they would set up donations and offered to help, that's when you took him in. You've been doing the best you can to help him and that's all that matters, and as I'm sure everyone has seen people will not hold back for what they think is a great cause. I'm sorry I can't donate as I right now do not have any beardies (and very brokenhearted about it) due to my financial situation and moving, but I want you to know how much I admire what you're doing.

You never asked for a handout, you never needed to be responsible for a sickly baby, but everyone has pulled together to help you to help HIM. Now that, to me and I'm sure everyone else here, is so admirable and heroic - very far from a handout.

You have every right to assistance with him because you actually want to do what's right for him and not just yourself. I'm happy there are people like you and everyone who has nursed or donated to a sickly animal in need and the people trying so hard just to keep them alive because of past neglect. Even just answering new people's questions on here is done out of the kindness and concern of our hearts and its encouraging to see other people like you appreciate what we have to say and share with us in the lifelong effort to better care for our pets.

AFirst-TimeLizardOwner
possible brumation
oh yeah also hes massive now and he broke his hammock
Saturday at 4:02 PM •••
D
Dodgersmomma
Can beardies eat Mustard Greens? Hope so I bought some along with some Cilantro. Needed to try something different. He won't eat his broccoli or cauliflower he used it eat it. So I thought I'd give it a try.
Dec 2, 2022 •••

aether
substrate looks scrumptious
Nov 20, 2022 •••
X
Xinex1567
My female bearded dragon has recently started gasping for air all the time. She can’t get sleep or really do anything because she has such a difficult time breathing. I think it might be a RI but I’m not completely sure. Any thoughts?
Nov 13, 2022 •••