Another Rescue — His name is Spike!

Okay so I do not have the space, time, or money really for another rescue so I found a rescue center and they are willing to take him. I’m just going to pick him up, hydrate him and offer some greens, maybe clips his nails, and take him to the center.

I’ve been looking for a larger tank for my rescue Simon for before I send her off, and Spikes tank is the perfect size but I’m not sure I want to make him change tank sizes in his current state. It would work perfectly for me, especially since they want $150 for everything… but I’m not sure I could make Spike part with his home. The shelter has extra tanks of course and he will be much better off after getting proper lighting and everything.

Here are the photos attached. The tank is 48 inches long which is what I’ve been looking for for Simon when I stumbled across this post.

I was horrified to see that Spike only has one red light. NO UVB and no white light. Poor guy. He looks dehydrated and malnourished. The shelter found the add and would be willing to take him in his current condition if I can manage to afford getting him.

These photos are from a month ago so I’m not sure about his current condition.

I just got off the phone with the rescue and apparently they wouldn’t Use his glass enclosure anyways. They use stackable wooden 50 gal enclosures. Sounds like he will be moved out of his tank anyways so it should work out well for me and Simon to get his tank without having to feel like I robbed Spike of his home

Omg what is wrong with people. If he is going to a rescue, he probably would not get to keep his tank anyways. I say get him and use the tank, you will be saving him. He won't survive where he is at now.

You posted while i was still typing lol. He will be worlds better off. Don't feel guilty, your saving him from a slow miserable death. (There should be compentecy test that you have to pass before being allowed to get a reptile, they suffer to much at the hands of ignorance)

Spike is at the rescue now. I knew it was a residential rescue but I did not except it to be run by one teenage boy out of his bedroom lol! He did seem knowledgeable and he is familiar with bearded dragons with MBD, he actually had a baby dragon he was rescuing who had an MBD tail who’s getting adopted soon

it was a little dinghy in there and he did have one coil UVB :/ but mostly tube. I told him I’d like her to have a tube UVB. I believe Spike is female and has MBD as well as pretty bad malnutrition. She has some deformities in her ribs and front legs, an underdeveloped jaw, tiny tiny teeth basically toothless, and a stub tail probably from when she was a baby. They had been feeding her super worms and freeze-dried bugs They offered greens but she didn’t eat them, only occasional broccoli.

Here are some photos. I gave her water (she was so thirsty) and a nail trim before taking her to the rescue. Also could someone please tell my if they think she is female?

On a brighter note she could run, had a decent-looking poop at my house, and was fairly alert and energetic considering everything.

She looks female to me, bless her heart they did a number on her. It makes mecso mad because it's easily available. I'm glad you took her, now maybe she stands a chance to live a good life. Again i say you are a hero!!!

It’s hard to explain but she looks better in the photos than in person. In person you can really see her odd body shape (very skinny) and deformities in her ribs. Baby was so thirsty, I gave her two syringes of water and she was smart enough to to go to the cup I was pulling the water from and lick it to ask for more 🥹

the Rescue Center boy said he would send updates

I think he could tell how concerned I was for her well-being.

I told the previous owners (parents who had her as a pet for children) about UVB in case they were EVER going to get another reptile. They seemed not to know and felt bad, but like you said it’s easy information to find out about if you look. They also got her from previous owners who supplied the incorrect equipment so I think they assumed it was adequate but didn’t have the initiative or concern to look it up themselves. It’s really something that should be federally regulated in my opinion, like it is in Australia. But US capitalism loves impulse buying so that is a long shot :/

OH and I forgot to mention. I showed up and the tank was 40 gallon

I gave them the $150 and even though the shelter suggested I could sell it I just donated it to them because I don’t need a 40 gallon. And I figured they could use the donation. So $150 and I saved a lizard which is priceless

but I gained no objects of monetary value.

And that's what it is really all about.

So glad Spike is in much better hands now! I’m sure she’s very thankful for you and her new home

I think I got lost on what's been going on, you have 2 rescues now or you got rid of Simon to get this one ? I was thinking in your last post about Simon that she was doing well. Forgive me if I messed up the scenario. 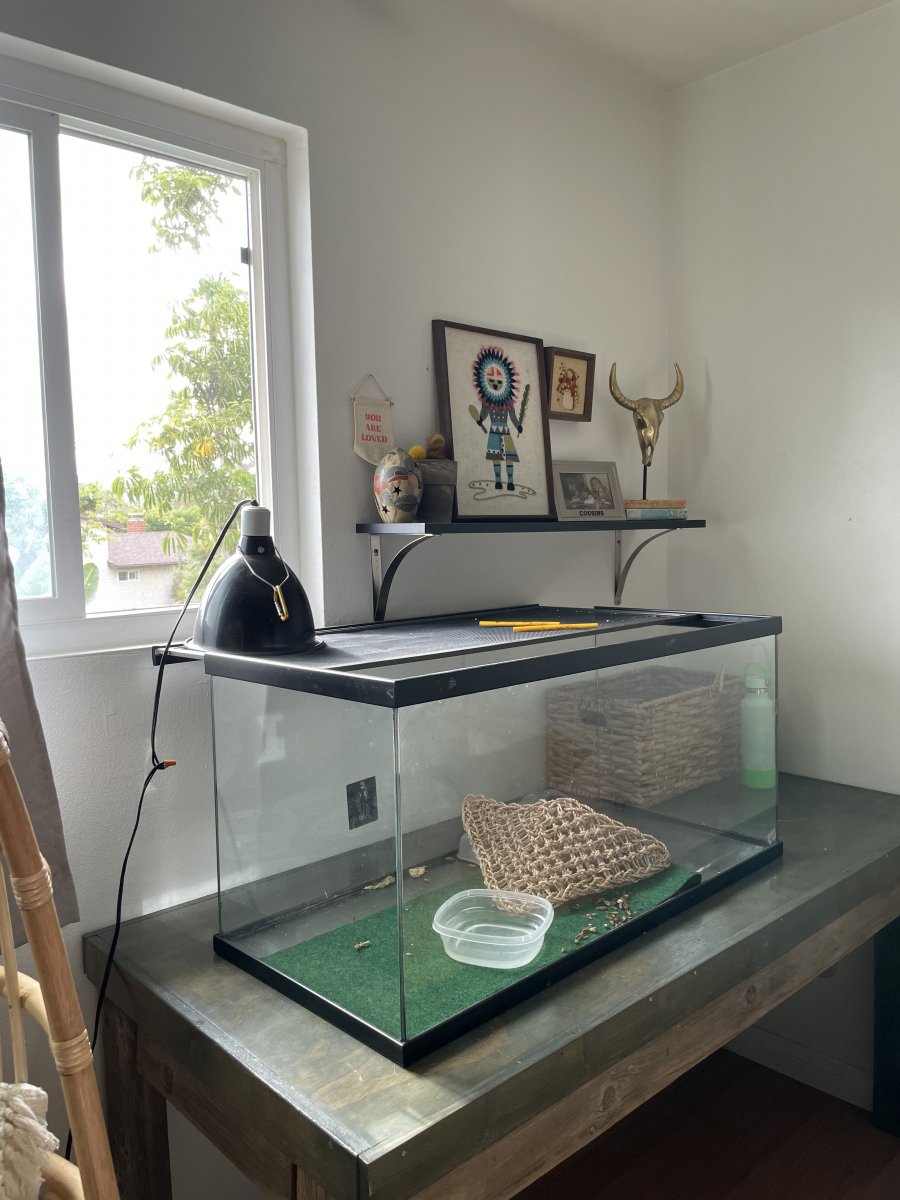 Hi there! Today my friend sent me some photos of the enclosure that a beardie named Simon has been living in. Her friend couldn’t house him anymore and gave him to his parents who don’t know and don’t care to give him proper living environment and care. I’m considering rescuing Simon until I...

The new rescue was taken to a rescue shelter and given over to someone who is willing to rehad her. The habitat the new rescue was in was going to be used for simon but was the same size so it was donted as well. So basically Clyde612 spent 150.00 out of pocket to rescue a beardie that would not have survived. Like i said a HERO!!!!

The original dragon was Simon, that's the one I was inquiring about.

He still has Simon, he is looking for a 4x2x2 habitat to rehome Simon in, and came across Spike. He found a rescue that would take Spike so he was going to to use Spikes habitat to rehome Simon, but it turned out it was smaller than advertised. He still took Spike to the rescue, but left Spikes habitat with the rescue also. So he didn't end up with a habitat for Simon, but now Spike us safe, and Simon still needs a 4x2x2

Welcome to another episode of As the sun rises .... it's a beardie soap opera