2yo beardie refuses to eat- clean fecal and blood samples

Captain Jack, my 2 year old beardie, has been slowly losing his appetite over the last year, and as of May 2013 he has stopped eating completely. I’ve listed details below, but his temps are normal and he is well hydrated. After a clean fecal and blood sample, I am now force feeding him via syringe a mixture of Oxbow critical care and Oxbow carnivore care daily, but he still refuses to eat. I’m very concerned now because he has now gained quite a bit of weight from the Oxbow and still uninterested in any kind of food.

The following paragraphs include detailed information. I’m sorry for rambling on, but I want to try to give as much detail as possible in case the vet or I have missed something.
When he was a baby, he had a huge appetite until around 7-8 months of age when he was diagnosed with coccidia. After 2 months of medication (panacur and albon), he was free of parasites and hasn’t had any problems since, but he never regained his appetite.
The temperatures are stable in his tank (around 100-105 under his basking area). I check them with an infrared thermometer. I have even tried to raise them and lower them, but he still won’t eat. He has a 3 month old 10.0 reptisun bulb inside of his tank and his basking light bulb is a 50 watt halogen that I can raise and lower depending on the temp of the apartment. He’s in a 55 gallon tank with sliding doors on the front.

We have been to the vet, and his fecal and blood samples are clean. The only thing that the blood sample revealed is that his blood sugar is low (most likely related to not eating). I’ve tried feeding him horned worms, silk worms, super worms, wax worms, butter worms, collard greens, turnip greens, butternut squash (which has always been his fav), celery tops, carrots, tomatoes, zucchini, and grapes. He won’t even look at any of it. The vet even gave him a shot of B12 to increase his appetite, but it hasn’t helped. I am now giving him 6 cc of a mixture of Oxbow critical care and Oxbow carnivore care once daily per the vet’s instructions.

He is well hydrated (15 min soaks every other morning). The vet has said to continue to force feed him the Oxbow mix until he starts eating on his own again; however, it has been 3 weeks and he still refuses to eat. He has always been extremely lazy, but he is alert and acting normal.

Thank you so much for your time, and if you have any questions please let me know and I will do my best to answer them. I appreciate your help!!!!!

I'm sorry to hear about that. Does the either of the oxbows care have probiotics in it? That is needed after those meds wipe out the gut flora. Was his stomach distended while not eating? His liver might be swollen & an x-ray will show it. They wont eat with a swollen liver. Our big girl has that prob right now caused by a fungal infection. She lost 45g since June (from 945g) & lots of sleeping. We left her at the vets today so she can get better. Good luck!
T

well I've been syringe feeding for months now. he may be between 5 and 7 yrs old. Started not eating after coming out of brumation back in February. Do they just stop eating as they get older? I have done bw on him which was normal. Fecals which was (+) for coccidian but treated and have done 2 more fecals since with (-) results. Just don't know what else could be going on. Need some guidance. All temps have been fine,Tile substrate. Tried all different kinds of vegs, fruits and his Fav bugs. I too giving him critical care and carnivore care.
C

Original Poster
It's been a year and a half since Jack was on any prescription antibiotics but at the time I was giving him acidophilis+ and soy yogurt. He regained his appetite afterwards, but has lost it again since. I was worried about his liver and kidneys, but most of that should have showed up abnormal in his blood work...I've now ordered Reptaid so I hope that will at least increase his appetite.

Tega12, I'm sorry to hear about your boy, and I know how you feel. I'm wondering at this point if Jack will ever want to eat on his own again. I've started making a slurry out of squash and greens half of the week instead of the oxbow and found out that jack prefers the oxbow. The vet also recommended that I only syringe feed jack every other day to encourage him to eat on hos own, but he just waits for the syringe.

Happy Jack this morning after his syringe feeding... 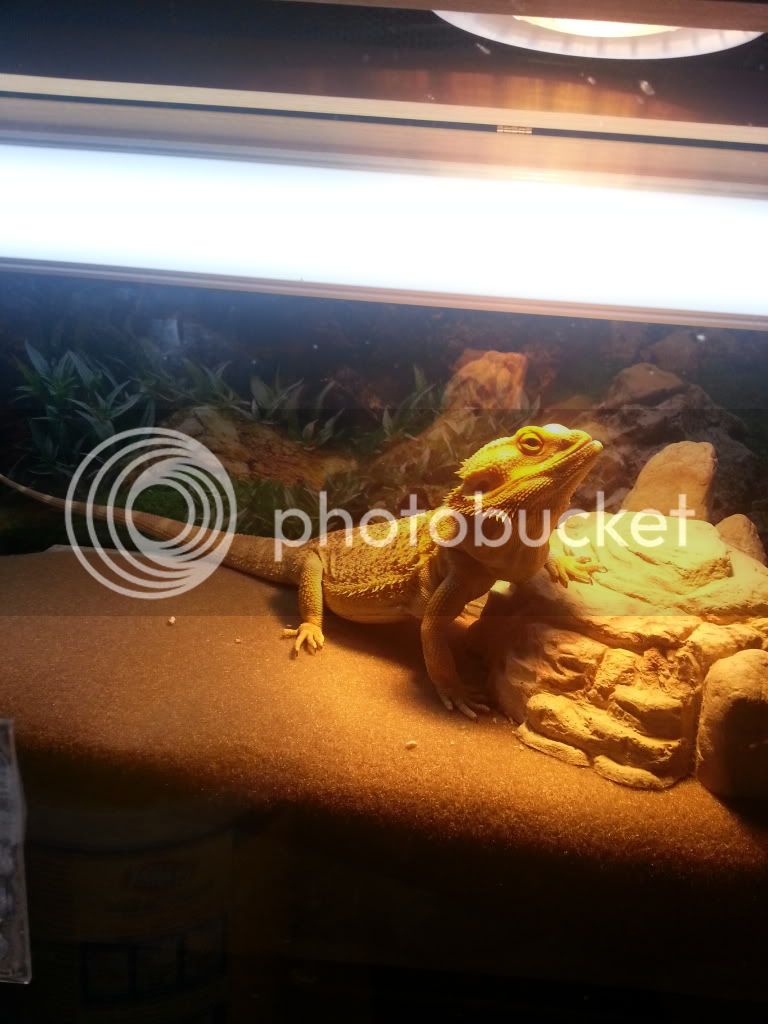 Speaking of syringe feeding, Kirbi :love5: is being stomach fed now for 3 weeks with LaFaber nutritional support, Fluconazole, Ponazuril, & a little KY on the tube. I choose exotic boarding for this. Some days I wouldn't of had an extra set of hands around to help me.
I hope our Beardies get better.

chestermymunchkin
setting up a tank for a garter snake in a few months!!
Yesterday at 10:23 PM •••