Menu
Log in
Register
Install the app
You are using an out of date browser. It may not display this or other websites correctly.
You should upgrade or use an alternative browser.
Resource icon

Leave a rating
Written by Stuart McDougall on December 10, 2006 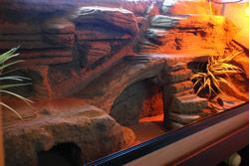 This article is about how I built my false rock to fit my enclosure. Having a standard 4ft x 2ft x 2ft enclosure, I decided to give it a facelift. I had a piece of faux rock made from molded resin which looked great in the tank. I wanted to make the new enclosure look along the lines of the faux rock without costing me the fortune that a pre-molded rock would cost. So I started to investigate how to make false rock. The following is how I made it and what I used to do it with. This is only meant to be a guide to help you.


First I went out and purchased the following​

After measuring the dimensions of the vivarium I cut the poly sheeting using the 1ft-10" as height. When cutting the length to size, remembering to subtract twice the thickness from the overall length as I was making sides as well as a back. So my 47" internal measurement went to 43", which allowed me the 2" that each side would take up. The sides were cut to the internal front to back dimension, which worked out to be 1ft-11". So I ended up with 3 pieces 43" x 1ft-10" and 2 at 1ft-11" x 1ft-10" (if you where just making a back only then use the full internal dimension in this case it would be 47") 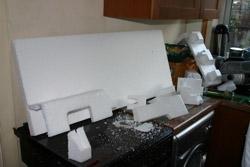 Mark the outline of the hide onto the back poly. I used a pencil mark both the outside and inside of the poly, then cut a grove using a craft knife along the marks so that the hide fits snugly and the poly will hold it.

Once you have your basic hide sorted, it is time to make some basic shapes and ramps. 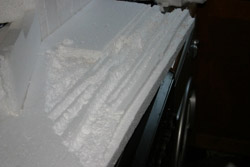 Now use the craft knife open the knife to 1" of blade showing. I made several cuts into the 2" foam up to 1" deep and ½ inch to 2" wide into the foam then literally pulled it out with my fingers giving a rough undulating effect before covering it with grout. This will give you a great uneven surface and a better look for the finished project. 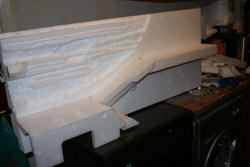 Now cut the first shelf and fit like before by cutting a snug groove into the poly then add a second shorter shelf above the first using the same process. Then make a central support column where the ramp joins the shelf. I made mine from larger to smaller as I went up.

In retrospect I think I would of preferred an hourglass shape. Those I have seen since in this shape tend to look more realistic.

Once all the shapes are cut, it's time to get funky with glue and poly expandable foam. I also added some bits to the shelves just by ripping apart off-cuts of poly.

This was then left for 12 hours to dry 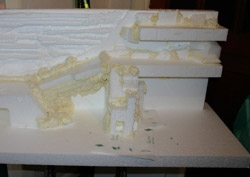 At this point, I carved in some detail to the central column using a craft knife, to make it stepped. I also removed any extra expandable foam and did more detailing in to it. Lastly, I removed the square edges and arched the bottom edges of the horizontal shelving and the ramp. After which, a I gave it a quick rub with a good medium grade sand paper. This finished off rounding the edges of the shapes.

The 1st layer was brushed on using a thin paste grout making sure I covered the whole thing.

The 2nd layer was done once the first had partly dried. I repeated the steps of the first layer but slightly thicker and some places were stippled (mostly the vertical ones). Then I left it overnight to dry.

Remember to cover all of the structure including the inside of the hide. 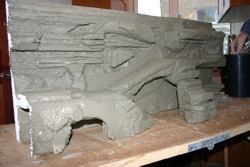 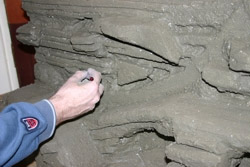 For the 3rd layer, I used the larger flat artists pallet knife. I used this knife for all the flats so as to apply a good thick coat to walking areas. I also carved some basic features into the grout.

For the 4th layer, stippled the vertical areas with a thick paste grout. About 2 hours later, I went over any thin looking areas. Then I again left it overnight to dry.

The 5th layer was the most important for me, as this is the main detail layer where I applied grout to all the bulges and flats. 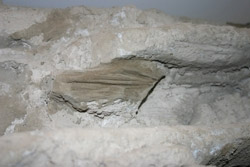 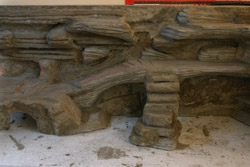 Apply a thick coat of grout to an area to be detailed. Allow the grout to set for a while without letting it go to hard. 20 minutes or so should do it. It will look a little lighter in colour with a sandy sort of texture. At this point I started to carve details. I used the side and the rounded points of the smaller artists tools, dragging, cutting or pressing the desired strata shapes into the grout.

Once you have it looking the way you want, leave it again for a few minutes. Then brush very lightly over the top with a soft 1" paint brush. This will remove harsh edges giving it a more sandstone look of being worn and weathered.

If timed correctly, you can apply the thick coat of grout to an area, and as this is setting, you can be detailing somewhere else. 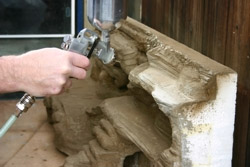 Once the base colour had been applied, I then continued to spray the different colours, allowing them to overlap. I had mixing tones and shades as I went along. If I made a mistake or put to much of one tone to an area, I left it for a while and resprayed that area using the base tone to lighten the effect.

The paints I used are all Acrylic children's liquid paints (non-toxic) thinned with water.

Burnt Umber had been used the most and I have gone through 250ml of a 500ml bottle. 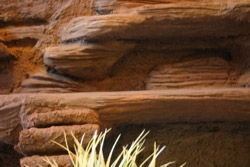 Mixing the orange with a small amount of green makes a great mustard colour. The burnt umber was mixed with small amounts of either blue, black, red, white, and/or yellow to alter the colour cast base umber tone, making the resulting colours more suited what I was looking for. Black and white were mixed to make grey tones for added shade. The grey was mixed with the burnt umber to make sort of a dirty brown tone. I started with a base colour of burnt umber all over then changed the tones as I went along.


The Rule of Thumb that I used​

In retrospect, I think I would of liked more brown tones rather than having to mix colours. Some extra tones I would have included would have been a dark brown, brown, or light brown sandy sort of colour, and a light green or olive colour.

Once the spraying was done, I added a small amounts of extra tones using a sponge. 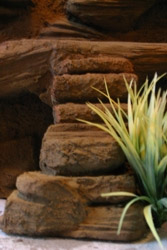 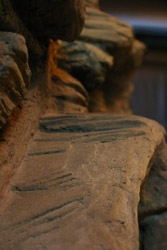 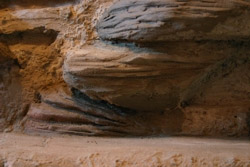 Lastly, I sealed it using a heavy mix of PVA (again a child's one). Be aware there are 2 types of children's PVA. One will disolve if it gets wet after having dried (much like the more common Elmer's Glue). The other is water resistant when dried. A good example would be Elmer's Carpenter's Exterior Wood Glue. You require the water resistant glue. You can find more information about PVA at this UK DIY site.

I thinned the PVA slightly with water and sprayed on an initial coat to be sure to get it into all the crevices. I then brushed on two heavy coats. In the end, I used up an entire 500ml bottle. 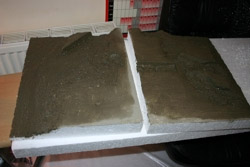 Once finished, I used hot glue to affix 2 large plastic plants in place, as well as to fit the back and sides in place inside the viv, to give the final effect. I have not really mentioned too much about the sides I kept them plain and simple, cutting the poly in arches to make it stepped, then continued the process as above. Again, like the shelves, I cut a matching groove into one side so that the shelves had support into the side panel.

Once fitted with its sides this is what mine looked like... 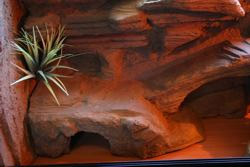 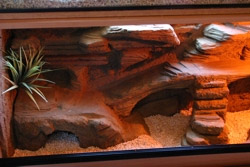 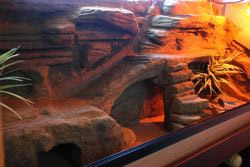